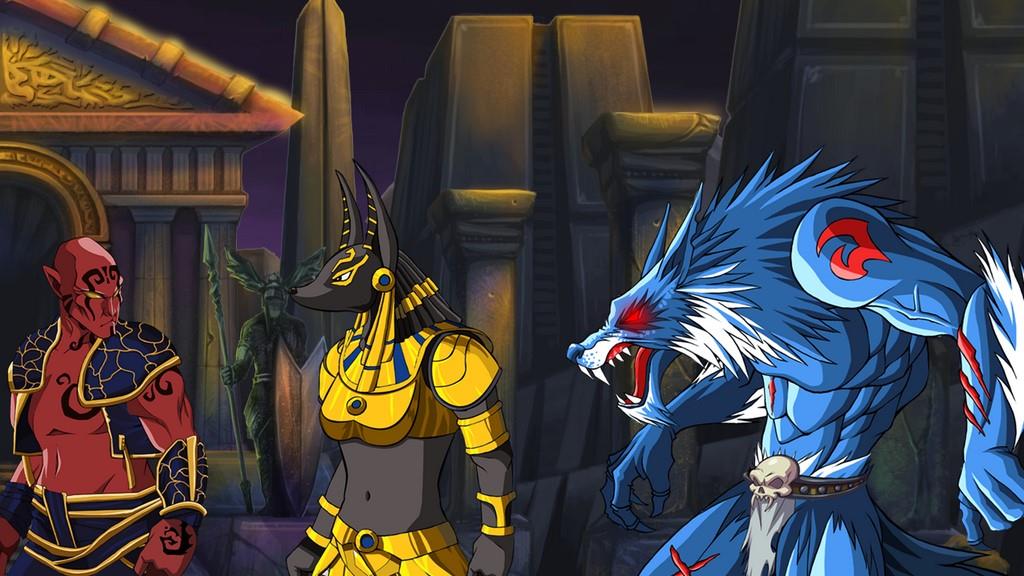 Dungeon Punks can't quite figure out what it is, a fact that is represented immediately by the incredibly misleading title. "Dungeon Punks" brings to mind something like a cross between the gameplay of, well, a dungeon crawler with the tone of a game perhaps like Metal Slug. But, it is very much neither of those things. In fact, it has so many different elements in small doses that, for better or worse, it doesn't feel like any other game I've played in recent memory. It tries to combine a wide variety of ideas, a lot of which don't quite gel the way they're supposed to, leading to a very inconsistent game that is going to be hard to write a consistent review about. I may have to jump around from topic to topic a bit, but read knowing that the game I'm describing does just the same.

Let's start with what the game did best: the visuals. This game is gorgeous, both in the actual visual fidelity and, particularly, in the art style. Everything is hand drawn (or at least appears to be) and incredibly colorful, with a huge variety of level and creature design. It draws from nearly every fantasy trope in the book, which allowed the artists to have an absolute field day with what they were able to do. Just within the six playable characters you can see what a wonderful level of care and detail went into the designs. This extends to the insane amount of different weapons and loot, which for the most part all have their own very specific look. I really can't stress enough just how great Dungeon Punks is to look at.

The score was also very well done. Many of the main themes, like the menu music, do feel rather fantasy stereotypical, but the music in the levels themselves was always good, and always had a unique tone. Parts of it even reminded me of music from Lawrence of Arabia, a very eastern style that doesn't get used as much as I think it should. It can get a little repetitive after spending extended amounts of time in the menus, but for the most part it was all nice enough that I actually noticed it.

And, unfortunately, those two things are the only things that Dungeon Punks scored highly in. However, before I go any further into what's wrong with the game, it's important to point out that there aren't any really big, awful problems. It's a death by a thousand cuts situation, where almost nothing feels quite like it should. It falls short in a lot of categories, but in many of them it almost makes the cut, and since it's easy to see how much potential was here, constantly running into mechanics that were just shy of being done really well was both frustrating and a little saddening. 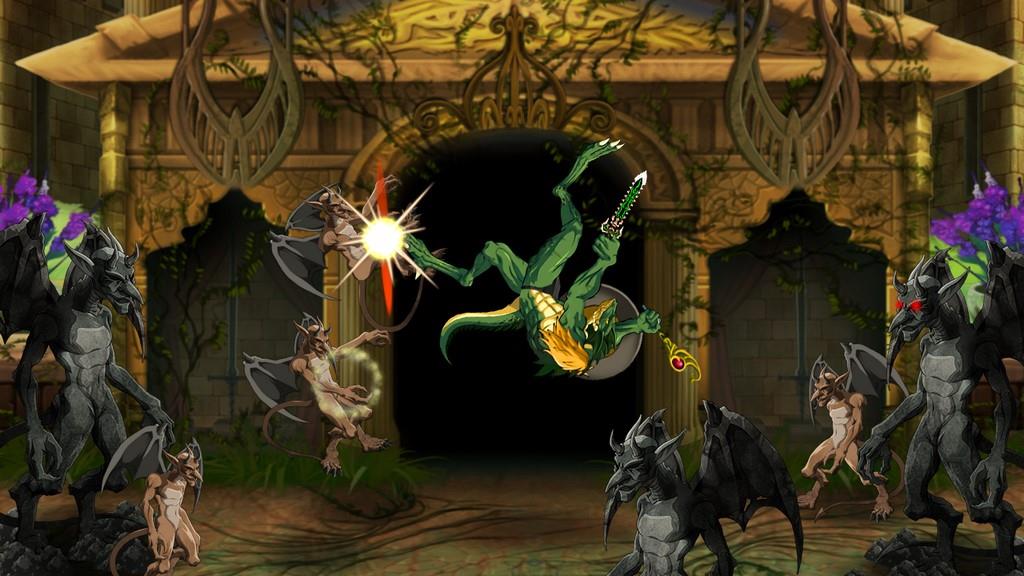 Like I said before, Dungeon Punks doesn't really feel like anything else I've played recently, due in large part to the fact that it just misses the mark on so many of the things it tries to do, leaving it with a slightly disjointed and incomplete tone that is so strange that it's unique. The game's setting and sense of humor clash in a way that was jarring at first, but eventually I began to like, even if it's uneven. For example, the first mission has you destroy pots to retrieve items from inside, like every video game ever made, and then at the end of the mission the owner of the pots, a very medieval king in full medieval garb, threatens to sue you for destroying his property. When it works, like that, Dungeon Punks can be very funny, but it can just as often be polarizing.

One of the key features of Dungeon Punks is its loot and equipment system. Every time you make a run through a level, you'll find loot and gold with which to buy more loot back at your base, the Windship. There are a few different kinds of weapons, and each character can use two kinds, so it's up to you to figure out how to divide the loot among the group. A good system, nothing too crazy, but like many other parts of the game, it just doesn't quite feel right. The UI for the equipment management screen feels really unorganized, and it requires just a little too much studying to figure out what stats are affected where and who can use what. Nothing game breaking, but a good example to really hammer home what I'm talking about here; it's a minor thing that gets more and more frustrating over time. 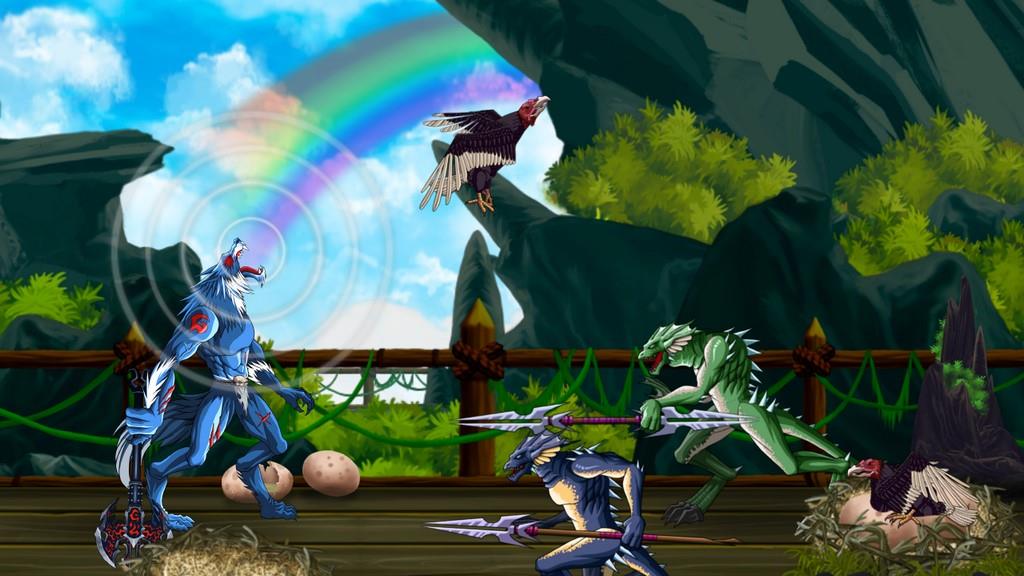 Getting your equipment just right is very important, too, because Dungeon Punks is surprisingly unforgiving in its difficulty. It never tries to hide the fact that it's designed for co-op, but even if the main menu didn't tell you, the difficulty would. The AI isn't very good at staying alive, which is unfortunate because it only takes a handful of hard hits for your characters to die, which leads to a system of progression that ends up feeling repetitive, even a little cheap.

You can leave a level one of two ways: death, or through an emergency exit. If you die, you lose some of your souls, but if you leave through the emergency exits, you get to keep them. No matter which way your run ends, you keep all the items and experience you've gained. Unfortunately, the game seems to expect you to play the level until you die, gain experience, then rinse and repeat until you've leveled up enough to finish the whole stage. Basically what this means is you can expect to play each level three or four times, which is annoying at best, and a cheap way to pad out a short game at worst. 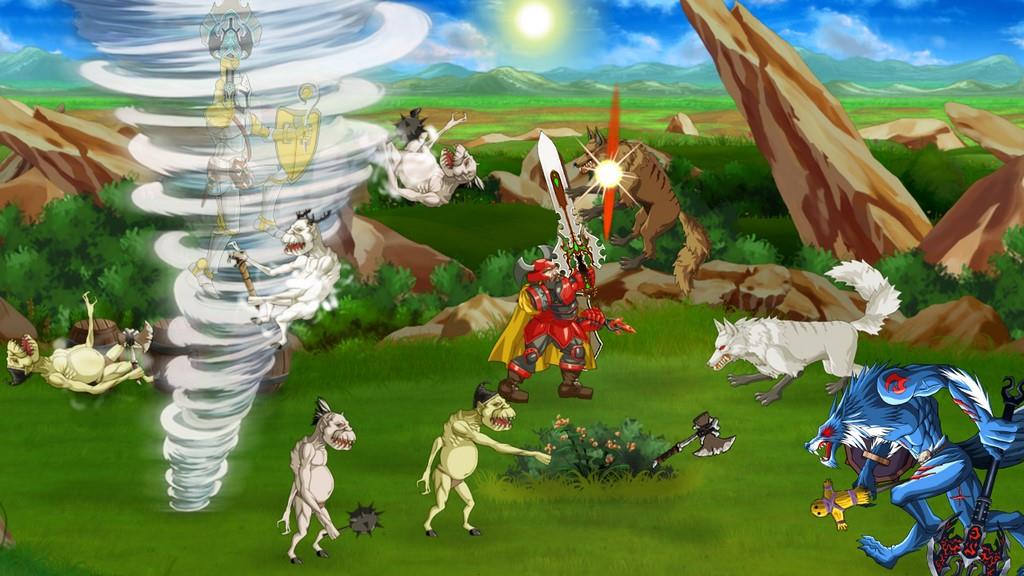 Speaking of co-op, Dungeon Punks, a game designed for co-operative play, does not have an online multiplayer. I can't imagine why the developers thought that was a good idea. It reminds me of a story I read online recently about a pub that installed a device that prevented people from using their cellphones in order to encourage face to face conversation. It's a nice idea to try and encourage people to get together and play a game on the couch, but it's probably just going to make people go to another bar where they can use their cellphones like everywhere else, because it's 2016, why isn't there an online component?!

There are many other minor issues as well: the movement speed is clunky, and tries to make you use the D-pad by default. Enemies respawn after a few screens, even though the game encourages you to backpedal for sidequests. Some of the magic attacks are incredibly hard to aim. Enemies have a weirdly large amount of invincibility frames after being knocked down.

Now, despite having said all that, believe it or not, I still like Dungeon Punks. It's just a really weird situation where there are so many things that are slightly wrong with it, but it's still a fun game. Playing something with your friends always allows you to overlook minor problems, though sometimes it does seem like maybe the developers were leaning on that a little too much. It's not a perfect game by any means, but the beautiful stylings and RPG-lite progression, even if it's a little unwieldy, will probably keep most people interested for a good several hours. If your camel has a weak back, however, there are just about a million pieces of straw here waiting to break it.

Despite a gorgeous art style and good attempt at RPG progression, both the gameplay and interface are just too clunky to make Dungeon Punks stand out from the crowd.