More often than not, two is better than one.  That goes for video games as well; you have a successful game, why not bring out a sequel.  The catch is that you have to do something with the sequel to make sure it’s not just a copy and paste from the original, but even then more of the same could be a good thing, just as long as it’s not exactly the same.  In the case of BOXBOXBOY!, it kind of falls in that ballpark and that’s both a good thing and a bad thing.

If you’ve never played the original BOXBOY, the goal is to just progress through each stage of pits, spikes, and other obstacles by making blocks and getting to the door at the end.  In each stage you have a limit to how many boxes you can make at any one time and when you begin to make a new set of boxes, the first set disappears.  Completing each stage earns you medals you can use to buy things in the shop, plus each stage also has one or two crowns that you can collect to earn more medals.  That’s generally the gist of the game in a nutshell.

So what does BOXBOXBOY bring to the series that the original didn’t?  In terms of gameplay style it’s pretty much the same, only with two sets of boxes available now instead of just one.  This opens up a whole new possibility for stage design.  The way having two sets of boxes works is the first set you create will be green, while the second set will have a light blue color.  When you create a third set, the green set will disappear and the set you’re currently creating will be green, and so on.  You can also hit X to make all blocks disappear from the screen which can come in handy in some stages where you need to create a new platform where a current stack of blocks lie.

Some of the puzzles are as simple as building a couple rows of blocks to walk over a pit or create some blocks, but instead of setting them down you’ll hold Y to collapse the boxes instead which can allow you to pass through passages you wouldn’t be able to otherwise.  More complex puzzles will have you placing boxes on spiked conveyor belts as they move along a path to press buttons and you may have to place another set of boxes with precise timing to reach the gate once those buttons are pressed.  As much as it pains me to use this pun, the game really makes you think outside the box, more so than the original game.

One of the minor nitpicks I had with the original BOXBOY was that the difficult was a bit on the easy side.  Sadly that kind of remains with BOXBOXBOY, but that’s not to say the puzzles don’t make you think.  I’ve had some puzzles where I’ve had to create a line of blocks to place on a conveyor belt in the air, then create a second platform of blocks below that to ride on, but I’ve had to time it to where the top row of blocks goes under a laser beam and blocks it from hitting me.  There are also puzzles where you have to have two switches pressed down to proceed and you have to find creative ways to have them pressed down.  That being said, there is one thing that I wouldn’t have minded getting changed: spending play coins to give hints for whatever part of the puzzle you’re on. 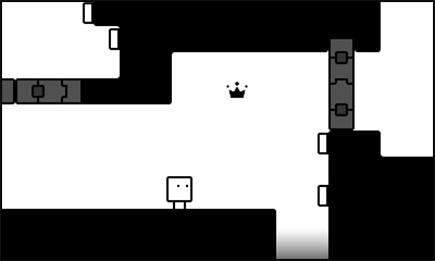 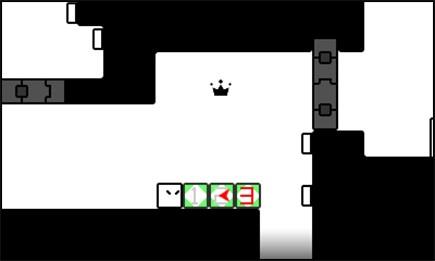 Don’t get me wrong, I’m not above getting help on puzzles.  There are some later puzzles where I’ve sat there and scratched my head for several minutes before using a hint.  However, each hint only costs one 3DS play coin.  The problem is that while you can have a max of three hundred play coins, they’re easily accumulated by walking around with your 3DS.  Every one hundred steps you take you get one coin to a max of ten per day.  If you save them all up, that’s three hundred “segments” you can get hints for.  My suggestion would have been to maybe make each hint at least five coins.  Making them only one coin each means you can get through a good portion of the game with very little effort if you wish to do so.

One thing the hints won’t provide though is how to get the crowns in a stage.  Each regular stage have one or two crowns each (challenge stages have around four each) and you have a limited number of boxes you’re allowed to create to get them.  When you complete a stage you get a few medals you can spend in the shop, but collecting all of the crowns in a stage gets you a perfect bonus of a few more medals.  As in the original BOXBOY, you can purchase costumes, mini-comics, and even music tracks to listen to.  However, there are a couple of costumes that you can only purchase if you bought them in the original BOXBOY, but won’t cost you anything in that case.  Most of the costumes are just cosmetic changes, though there are a couple that will affect your movement such as making you run faster or jump higher.  Outside of the challenge stages though, which will temporarily give you those costumes to use, they aren’t required to finish the game.

That’s about all there is to it.  Much like the original game, BOXBOXBOY is a very enjoyable puzzle game that adds a bit more depth than BOXBOY.  That being said, it’s still a bit on the easy side, though not as much as its predecessor.  If I had to change anything it would be the cost to use a hint, maybe changing it from one play coin to about five or so.  Otherwise with a full complement of three hundred coins you can breeze through the game without much thought it you wish.  Beyond that though the puzzles still provide a decent challenge, but not anything impossible.  Whether you’ve played the original or not, BOXBOXBOY is still a really fun game and worth the five dollars to pick up.

BOXBOXBOY is a great follow-up to the original game, though some gamers might find the game a bit on the easy side as while a lot of the later puzzles will make you think deeply about how to solve them, none are downright impossible or insanely difficult.  Even with that, the game is still a worthy follow-up to its predecessor.