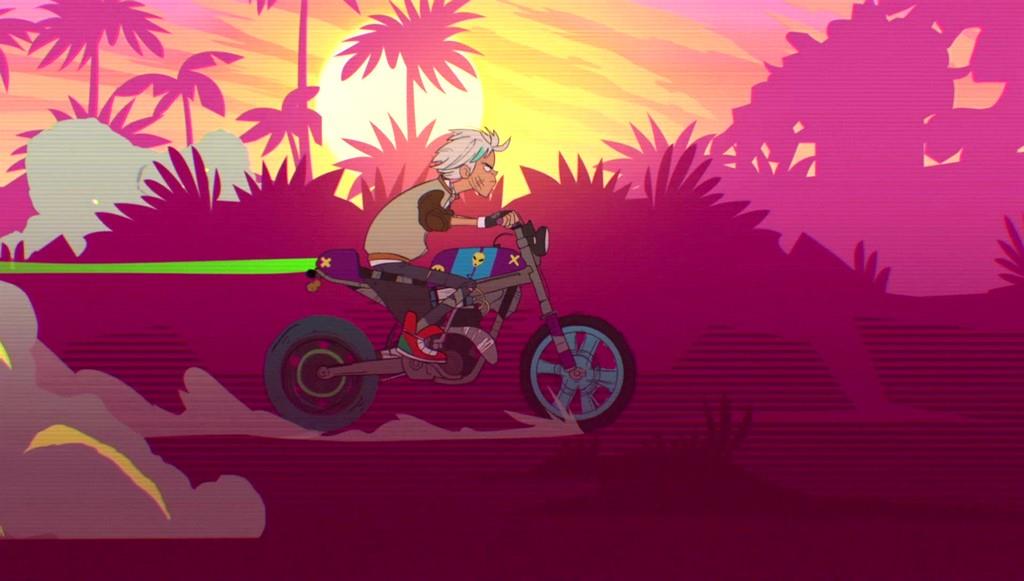 Trials of the Blood Dragon

When Far Cry 3: Blood Dragon came out in the summer of 2013, it was like a nostalgia lighting rod. I liked the original Far Cry 3 just fine, but its premise of modern piracy dragged on far too long and its main character was depressingly banal. Its spinoff, Blood Dragon, was as far removed as you could get from Far Cry 3 without switching to a new engine. It was a surprisingly substantial spinoff, retaining most of the core gameplay but reinvigorated by immersion in self-referential 80s pop culture. As cyber-commando Rex Power Colt, a veteran of Vietnam War II, your mission was to infiltrate a rogue terrorist cell masterminded by your former mentor. The game took place in the high-tech “future” of 2007. Rex was voiced by none other than Michael Biehn, star of Reagan-era hits like Terminator and Aliens.

Splashed with neon, thumping with synth music composed by retro tribute band Power Glove, and infused with the style of a thousand 80s action movies and G.I. Joe episodes, Blood Dragon felt like an accidentally perfect game. This was a game published by Ubisoft, a company notorious for rehashing successful formulas, for literally crushing the fun out of every franchise they owned by turning franchises like Assassin’s Creed into glorified grocery shopping lists. How could they possibly release something so irreverent, so gleefully immature and self-aware, one of the most entertaining guilty pleasures of the last five years?

As I suffered through Trials of the Blood Dragon, I found myself asking that question over and over again. Trials of the Blood Dragon feels less like Ubisoft intentionally ruined their most promising spinoffs, and more like they accidentally dropped it on the floor and broke it into a million pieces. There’s no way a bad idea of these proportions happened intentionally.

Most people would not mix cookie dough ice cream with hot, salty buttered popcorn in a bowl and eat it with a fork. But that’s essentially what Ubisoft has done with Trials of the Blood Dragon. They’ve taken the nostalgic, slightly naughty guilty pleasures of Blood Dragon and awkwardly smashed them together with the addictive arcade repetition of the Trials motocross series. The result is distinctly unappetizing, and it’s really a shame because both of these things are just fine on their own.

If you aren’t familiar with Trials, it’s a long-running 2.5D motorcycle platformer developed by Finnish studio RedLynx. It started in 2000 as a simple Java-based game, eventually spawning four sequels and a multitude of spinoffs. The series places a heavy emphasis on trial and error and mastering the delicate physics of motocross bikes. The games have always had a dry, BBC-esque wit to them, but nothing approaching the full-bore sarcasm and 80s tongue-in-cheek of Blood Dragon. However, Ubisoft somehow decided that the best place to take Blood Dragon next was a Trials game. 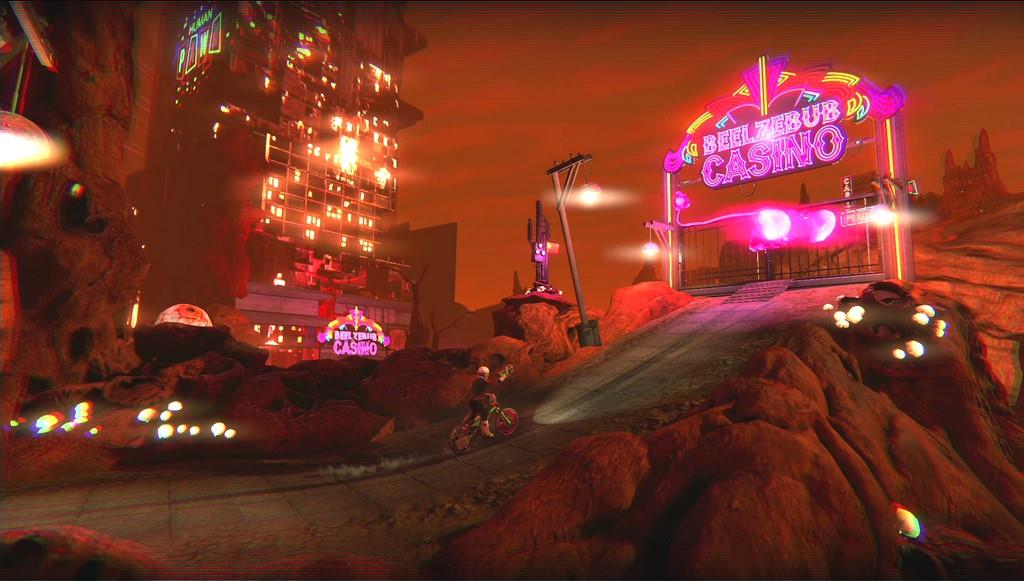 The plot for Trials of the Blood Dragon reads like one of those God-awful 90s Saturday morning cartoon companions to a successful 80s action franchise. Apparently after the events of Blood Dragon, Rex Power Colt retired from hunting cyborgs and married his fling from the first game, Doctor Elizabeth Darling. They ended up having twins, Roxanne and Slayter. Darling vanishes, Rex goes off to fight Vietnam War IV, and the twins are transformed into teen cyber-commandos so they can fight the neo Viet Cong. RedLynx was probably going for self-aware humor here by styling the plot after so many of the forgettable “90s radical!” imitators that followed the 80s action craze, but in Trials of the Blood Dragon is just ends up as plain bad and exasperating.

Unlike the original Blood Dragon, which was an open-world FPS adventure game like the rest of the Far Cry series, Trials of the Blood Dragon is mostly a Trials game. Slayter blasts through levels on his bike, framed against a dystopia that was every cold warrior’s worst nightmare. Nukes explode in the background, neon signs sputter and explode, toxic jungles ripple with purple plant life and enemy cyborgs stalk the night. I’ll be honest, RedLynx did a great job translating the look of Blood Dragon to their motocross framework. Power Glove is also back, thank God, with another killer soundtrack that has a distinctly more Eastern flavor but hits all the right techno beats. But Blood Dragon was so much more than look, sound and feel, it was a personality baked into the gameplay, and Blood Dragon just doesn’t gel with something as pedestrian as Trials. 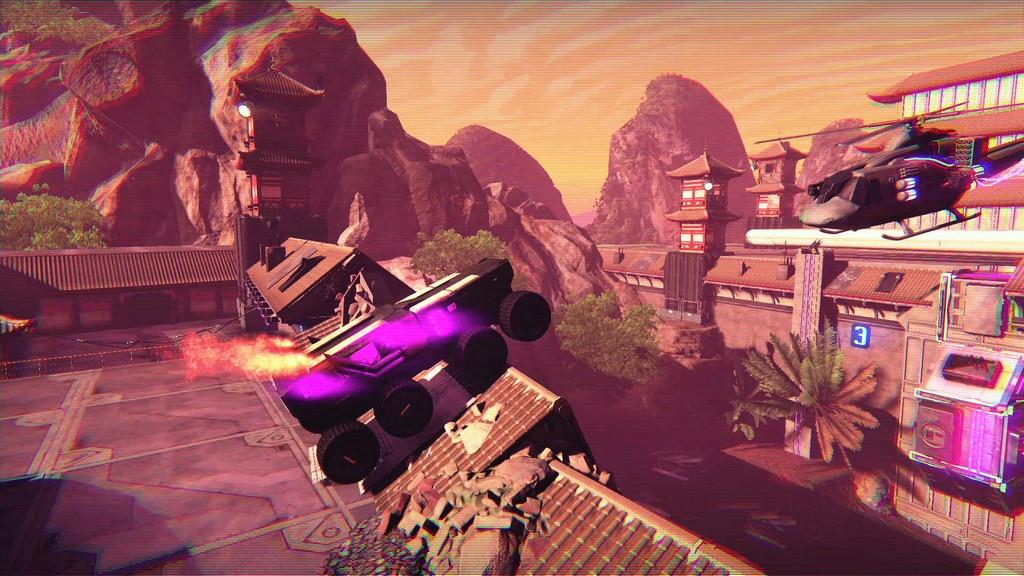 That’s not to say Slayter’s levels aren’t perfectly serviceable trials courses, even if they might be a bit too easy for Trials series veterans. The gameplay is what long-time fans have come to know and love. Levels are side-scrolling courses of ramps, loops, hills and daredevil jumps, punctuated by a multitude of checkpoints. You will need these checkpoints, because you’ll be wiping out often. Trials is all about varying speed, pitch and orientation so you don’t flip over on a steep hill or go flying off a jump only to land in a heap of broken hips and vertebrae. This involves a lot of trial and error, to the point where Trials feels a little like the motocross equivalent of Hotline Miami.

That said, the gameplay is interrupted by the garish Blood Dragon scenery. Previous Trials games were somewhat serene in their dirt bike arenas, sunny outdoor roller coasters and industrial parks. Even the grunginess of the monster truck rallies can’t match the technicolor chaos of Blood Dragon. The explosions and action movie setpieces distracted me from focusing on the gameplay, so I never reached that trance-like, Hotline Miami repetition. It just felt awkward and out of place. Speaking of which, sometimes Slayter has to pull out a machinegun and blast away at cyborgs, which frankly breaks the pace of the levels even more. It’s like Ubisoft mandated gun combat because hey, this is a Blood Dragon game after all! I can see the appeal of the Trials series—admittedly it’s not something I’ve spent much time with in the past—but if someone’s introduction to the series came from Trials of the Blood Dragon, they might never touch another Trials game again. 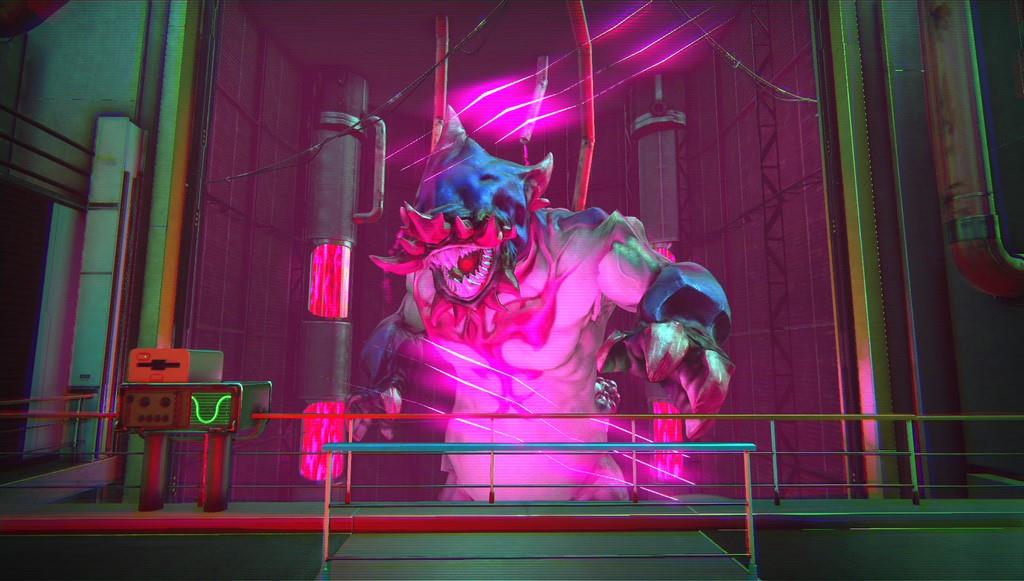 Roxanne’s gameplay is where Trials of the Blood Dragon fall to pieces. She’s more of a foot soldier than Slayter so she infiltrates enemy strongholds, subverts security and kills the occasional cyborg. This would be fine if her side-scrolling platformer levels were snappy and well-designed, but instead they are incredibly stiff, short and generally clunky. There are still plenty of checkpoints but that’s because Roxanne dies in one hit, which makes shootouts with cyborgs or stationary turrets an exercise in frustration. Most of the puzzles are fairly rudimentary as well.

Again I don’t blame RedLynx because I don’t think they’ve developed an action platformer before; from what I can tell, they’ve mostly worked on the Trials series, with a handful of turn-based strategy games and a few mobile apps here and there. They know what they’re good at and they do that, so it seems like really bad management for Ubisoft to dump the next game in the Blood Dragon series on a developer known for an arcade motocross series. 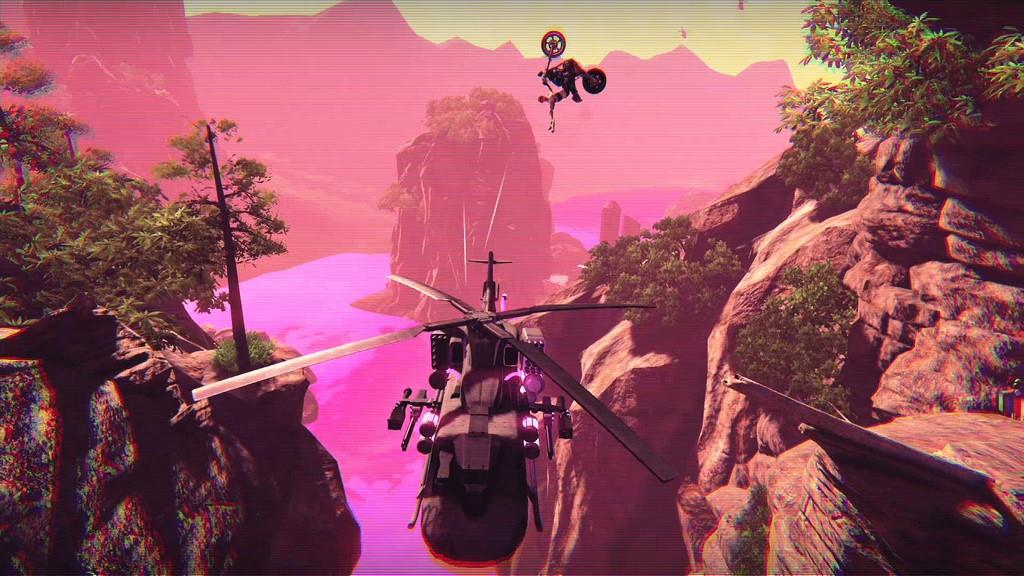 This whole project feels ill-conceived, badly informed and half-executed, and I’m really not sure who it’s supposed to appeal to. Trials fans are going to find the Trials levels to be short and a bit on the easy side, and not worth the $15 price of admission. They’re also going to really hate the clunky platformer levels, because they only serve to break up and distract from the Trials levels. Blood Dragon fans, on the other hand, are going to despise this game. It is literally nothing they want. Ubisoft has butchered the brilliantly sarcastic original premise, introduced two obnoxious teenage characters, and deviated so far from the Far Cry gameplay that there’s really no point in calling it a Blood Dragon game in the first place.

I hope to God they’re working on an actual follow-up to the original Blood Dragon. After playing Far Cry Primal and loving it, I thought that Ubisoft might have found a happy medium, a solution to their annual churn-out problem. Far Cry is a malleable concept; you can keep the gameplay more or less the same, but if you dramatically alter the setting between games you can keep the series fresh. You can be a punk rock cyber-commando living in a technoir dystopia and voiced my Michael Biehn in one game and a gruff, serious Mesolithic caveman in the next.

But if you take a simple, beloved arcade game and turn it into something it’s not, while destroying a promising Far Cry spinoff in the process? You aren’t making anyone happy with that.