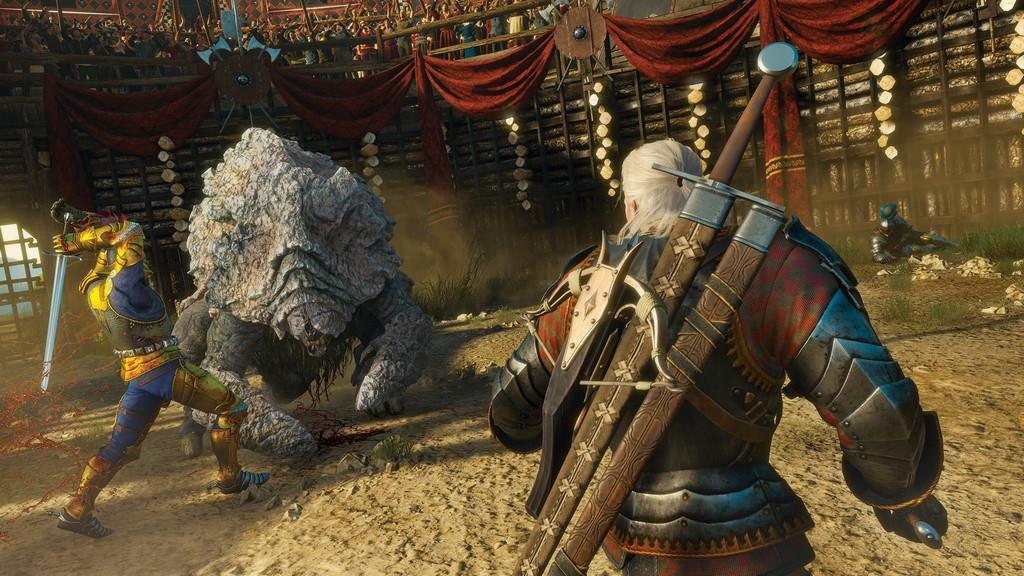 Endings are never easy. How many crummy third acts have ruined various franchises over the years? Mass Effect 3 will always come to the fore when talking about poor third acts. Blood and Wine is the second and final expansion pack for The Witcher 3, and with it, developer CD Projekt Red says goodbye to Geralt for a while. I'm happy to say that with Blood and Wine, CD Projekt Red has delivered one of the most satisfying goodbyes that I've ever experienced in a game.

Blood and Wine starts with Geralt meeting a pair of knights from Toussaint. The knights have been sent by the Duchess of Toussaint to track down Geralt and request that he track down a monster that has recently started killing knights in Toussaint. The cause of the killings initially appears to be—at least from the perspective of the people of Toussaint—because the Duchess has strayed from the moral foundation of the land. But as with everything in the world of The Witcher, things are not what they appear to be.

After some investigation, Geralt finds that a higher vampire has been killing the knights, based on the orders of a mysterious third party. Higher vampires are very rare and, in order to take this one out, Geralt enlists the help of another higher vampire: his old friend Regis.

Regis is one of the most fleshed-out characters in the series. Every interaction with him is a pleasure. The writing team at CD Projekt Red use Regis as a way to learn more about Geralt's past and, more importantly, about what he wants to do with his post-monster-hunting future. Geralt and Regis have an long history together and that allows Geralt to really open up. This isn't a Dr. Phil session, but rather it allows Geralt to talk about his motivations. Witchers don't normally live long lives and certainly don't often have the chance to retire, so Geralt is a bit in uncharted territory here.

The game isn't all about tracking down the mysterious "Beast of Toussaint." There are plenty of other things to keep you busy. As part of your payment for tracking down the monster, you are given the deed to a small estate. You have the option to spruce up the place a bit and even decorate it if you want. The game adds a new level of armor and weapons crafting, and there are a host of missions to track down all of those diagrams so that you can get the new armor. 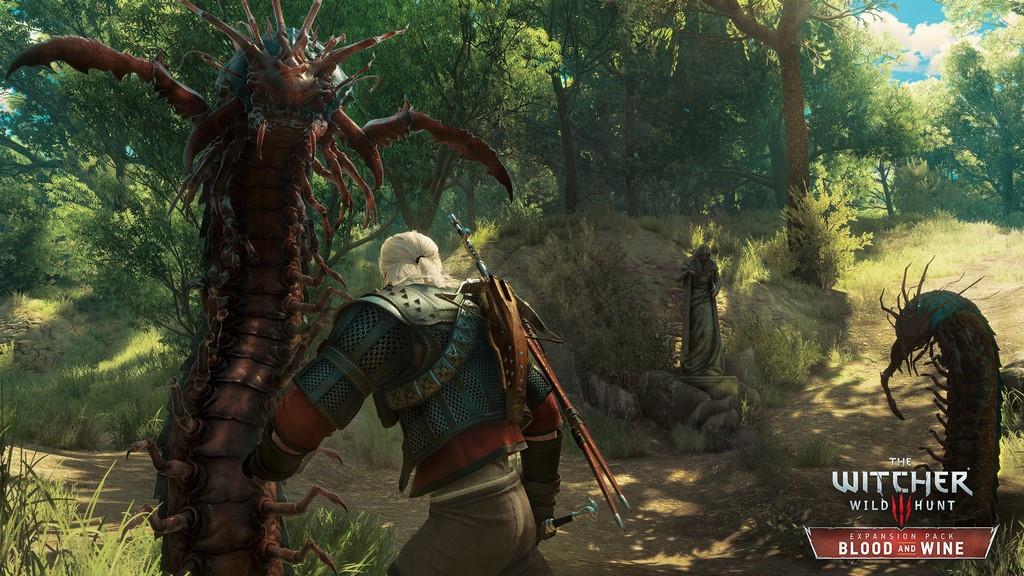 There are dozens of other quests that will take you to every corner of Toussaint. This expansion pack is so jammed with content that you will find yourself stumbling on new missions as you complete other ones. There were times when it almost felt like there was too much content, as a simple monster killing usually spirals into two or three other missions.

There are also a couple of fun tongue-in-cheek missions that are hidden throughout. My favorite of these was uncovering a gang of grave robbers with the names Bruce, Selina, and a third accomplice named Robin. This kind of thing would feel forced with a lesser developer, but CD Projekt Red gets away with it because of how sublime the missions are presented. There is easily 30 hours of content to play through, with more available to those who want it.

Blood and Wine also adds a few new monsters to your bestiary, including a few new types of vampires and some new plant monsters. You will have to learn the correct way of attacking these new creatures, as they can be difficult to deal with if you don't go in prepared to fight them. The Archespores (plant monsters) are especially difficult to deal with until you learn to take the anti-poison potion before fighting them. 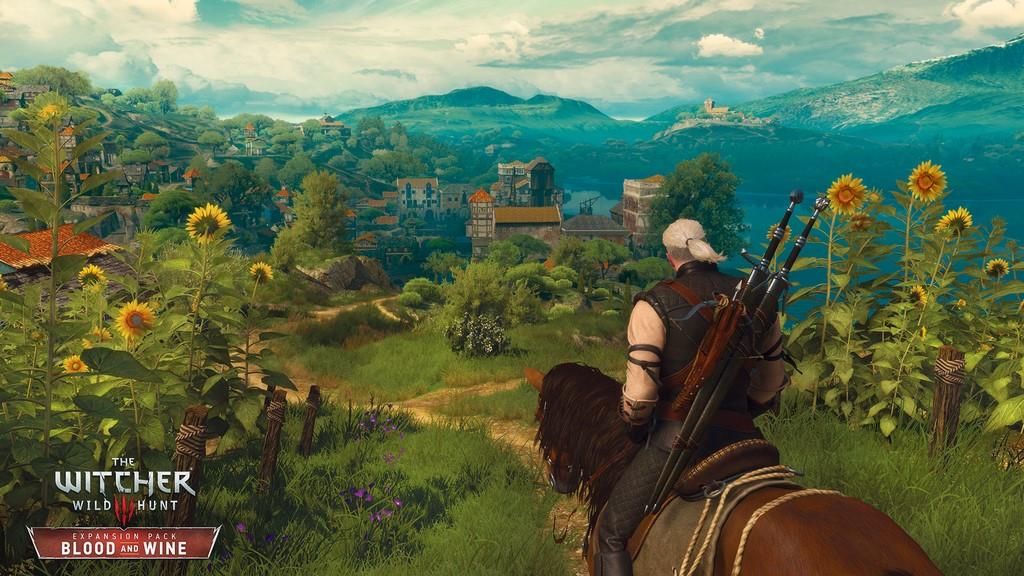 The main storyline is a treat and is filled with the twists and turns you would expect to see from a Witcher game. As with the main campaign and the first expansion pack, Hearts of Stone, there are several times when you think you are about to wrap things up only to find that there are five or six more hours of content to explore. It's never forced, though, and I never felt like I was playing through filler.

Toussaint is a bright and vibrant world, especially compared to the main game. Toussaint feels a bit more high fantasy. People speak in colorful language. Everything is clean and well-maintained. This is a departure with the low fantasy world we're accustomed to seeing in the main campaign. It makes sense, though, as Toussaint is new world. But I still suffered a bit of culture shock.

Much like the first expansion pack, you'll face some tough battles early on. There are also battles scattered throughout Toussaint that you will have to come back to when you are higher level. These aren't always apparent, leading to some odd difficulty peaks and valleys. I started the game at level 36 and, for the most part, had no trouble. If I'm honest, I was overpowered for so much of Blood and Wine that combat was rarely difficult. There were definitely missions where I had to prepare Geralt with the proper potions and use the right oils on my blades, but those were the exception and not the norm. 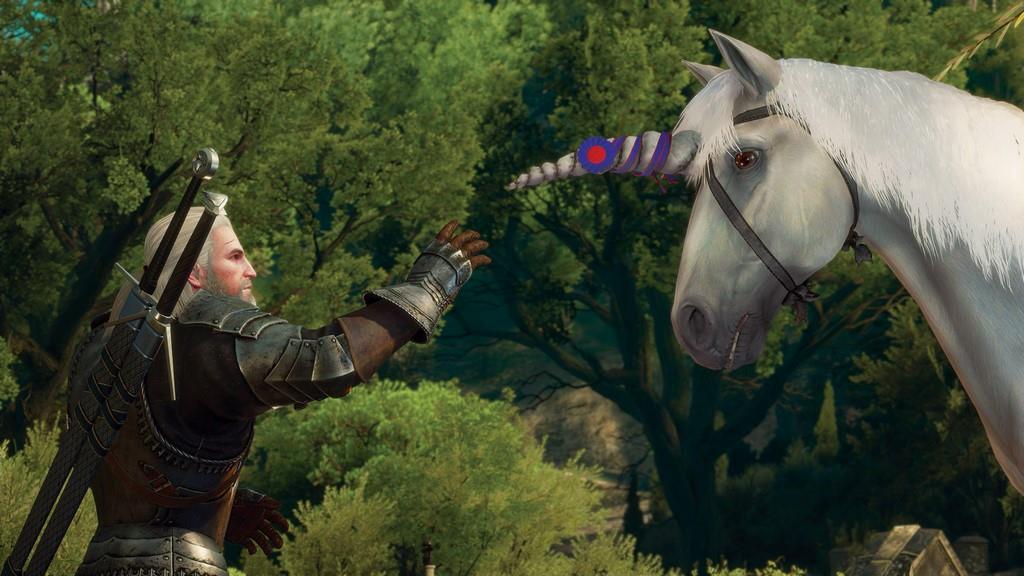 I did have a few technical issues, as it crashed on me twice, and there were some AI pathing issues at times, but they didn't detract enough from the experience to pull me out of the moment.

Blood and Wine is the perfect ending to one of the best gaming franchises of all time. I will admit that I took my time with this one—and in writing this review—as I'm not sure that I'm ready to say goodbye for good to Geralt and his world. Finishing Blood and Wine was like finishing a fantastic meal, as all I wanted to do was savor those last few delicious bites.

Geralt goes out on a high note. Developer CD Projekt Red, once again, raises the bar for every other company making an expansion pack.