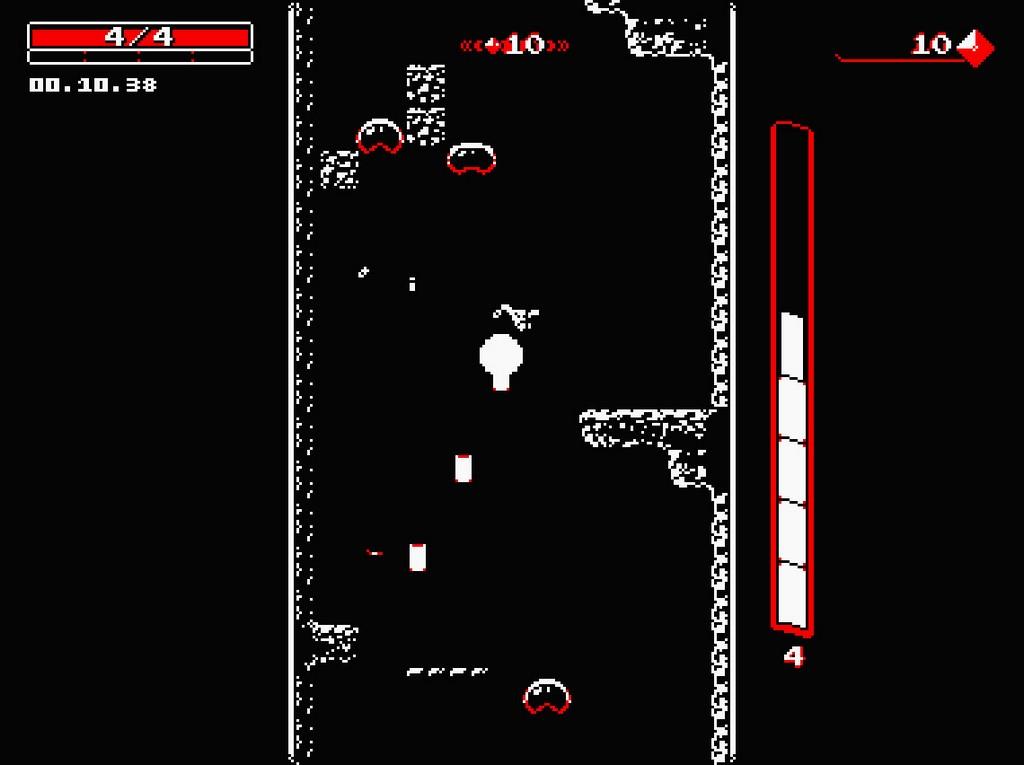 A well, a three color palette to display the visuals, and the recreation of that horrible dream where you’re falling forever, only with a bit more control. That’s Downwell in a nutshell, the latest game to go from iOS and mobile darling to a handheld (and console) blast to play that perfectly encapsulates an indie dev getting a game formula down perfectly. It also manages to straddle that fine line between difficulty and fun, where you just want to keep playing as you incrementally make your way down into the depths of wherever this well will lead you. And then there’s the low cost of entry, for a game that will easily entertain for hours. I don’t think I really need to go on, but in case you haven’t closed this review already to go out and pick up Downwell, let’s dive a little deeper.

The most immediate thing to note about Downwell is its stark color palette, harkening to 8-bit classics, Downwell features only three colors, there are variations that you can unlock as you collect gems, which offers up classic colors like the olive and grey color of the original Gameboy, or even the much maligned Virtual Boy red overload. In addition to aesthetics changes, there are also gameplay changes that you can unlock in your never ending search for gems. These change a few facets of Downwells doughy hero. Switching to Arm Spin style will cause a lot more weapon modules to appear, constantly changing your weapon capabilities. Boulder style will give you more HP, but limits the number of upgrades you can find. There are other styles to unlock, which will come after you’ve collected enough gems.

Your most important weapon in Downwell is your own body. Bouncing off enemies will restore your ammo, and managing your ammo to hurt enemies and slow your descent makes for a balancing act that is going to put your platforming abilities to the test, since there’s a combo counter that keeps track of how many enemies you can take down without touching the ground. Some enemies can’t be touched, and are helpfully denoted by the color red. As your progress further, air becomes a factor as well, with air bubbles necessary for your survival. The game has a steep entry wall, but once you get over it, you’ll find that the game is more than fair in its difficulty. It never feels like it was the game’s fault that you died, and I constantly was feeling like I needed just one more go to feel satisfied. 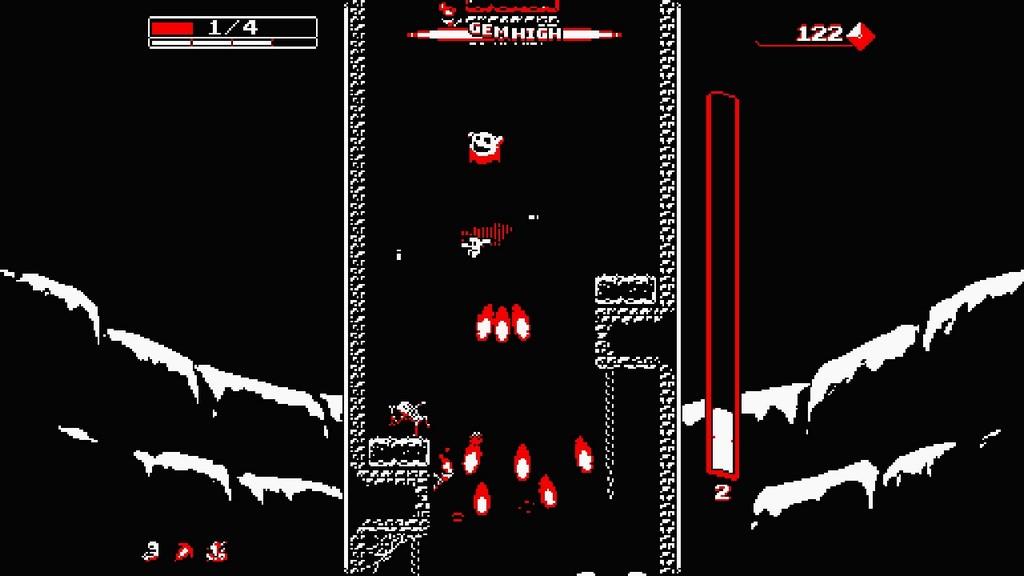 Along the way you’ll be collecting gems that will power you up as you collect enough, the increased firepower will be needed against the number of enemies that will be out to stop your descent. Gems are also used as in-game currency to purchase items during your run, which can increase the number of bullets you can fire, restore your health, or increase your max health stocks. Between each stage you’re also given a choice of power-ups, making you more capable in taking down the enemies in your path. There’s a little bit of slowdown when things get a bit hectic on screen, but with the proper balance of power-ups, weathering the storm doesn’t become much of a problem. The most crushing thing about dying isn’t that you have to start from the beginning, but you just lost that perfect balance of power-ups that you’re going to be hard pressed to collect again.

The worst part of Downwell, the smaller visuals on the PSVita screen, but with the game being cross-buy, you can easily take the game to a much larger screen. But really, this is the only complaint I have about the game, and even then, it’s incredibly minor. If you tried Downwell on mobile devices, you might have thought like me, ‘If I could play this on a controller, this game would be so much better.’ Well, that time has come, go get Downwell, because this game is a masterclass in simplistic design with perfect execution.

Downwell is pretty much the best mobile game on the go for the Vita. If the iOS controls were better, I wouldn't have felt the need to make the platform jump. But it plays so well on the Vita, it's practically perfect.