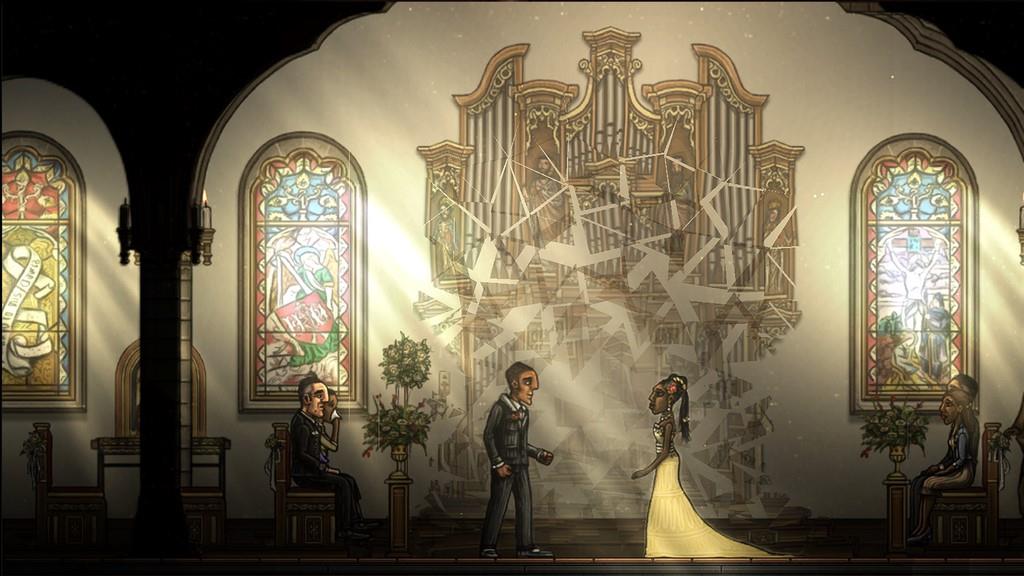 Okay, look. I'm going to go ahead and show my cards for this one. I really didn't enjoy In Between. Enjoy, in this case, is the operative word as well, because while I didn't enjoy the game, I did like it. I appreciated it, and appreciated the effort that went into creating a subversive, metaphorical journey. There's a concept in poetry called mimesis, which essentially means that art imitates life. For example, in a lot of E. E. Cummings' poetry, he will literally shape the print on the paper to reflect the subject he is discussing. In Between is a very conceptual and artistic game that puts a lot of emphasis on its hand painted visuals and storytelling gameplay. It uses that gameplay to form a mimetic representation of the theme it explores: the five stages of grief.

For example, during the Bargaining stage, which in the game revolves around the main character and his wife wanting to stay together, the game puts you in control of two characters who are mirror images of each other. The screen is split down the middle, and the controls are inverted for the right side, meaning if you go right with the main character, the mirror image will go left, and so on. The level ends when you touch the characters together, reuniting the man with his wife. It was such a beautiful metaphor for love, these two people literally being one half of a whole and desperately trying to be together again. But oh my GOD it was so frustrating to play.

In Between is a puzzle game trapped in a platformer. Actually, it's an art house project trapped in a puzzle game, which is then trapped in a platformer. The core concept of the gameplay is using the control stick to shift the direction of gravity. Uniquely for a platformer(ish) game, there's no jump button. The only things you can do are walk left and right and shift the gravity, and you need to adjust your course during the fall from a gravity shift and use that fall as a makeshift jump. A very cool idea that sadly is just very confusing, and every time you finally start to get used to it, the game throws in another confusing mechanic. Confusing is an important word there, because it doesn't feel like overcoming difficulty. It's just frustrating when you die because your character's movement is inverted and you press the wrong direction reflexively. I don't remember the last time a game had so many great concepts and such bad execution of them all.

The crux of the problem with the gameplay is that it requires you to be more precise than the awkward controls will allow. 90% of the challenge of In Between is wrestling the controls to complete the puzzle that you solved in your head five minutes ago, but just can't make your character do what you want him to. Worse, is that you'll often have to replay multiple segments of the same puzzles many, many times because the game won't let you have enough room to figure out what to do before it kills you, setting your progress back an often too harsh amount.

For instance, in another beautiful example of mimetic gameplay, the Denial arc has you running away from an ever-encroaching, all-consuming black fog that is slowly rolling in from both sides of the screen. The only way to stop it from enveloping you is by staring it dead on, causing it to retreat back towards the edge of the screen. From an artistic and narrative point of view, this is such a brilliant mechanic. It sounds wonderful when you write it down. Unfortunately, in practice, it's so awkward and makes progression from point to point really slow. Most of your time in these stages will be spent slowly walking to the left or right as the fog recedes, so you don't accidentally move too fast and walk into it, instantly dying and having to restart the whole level. It never really provides much of a challenge, either. In fact, there are very few things in In Between that are challenging; they are mostly just frustrating and imprecise. 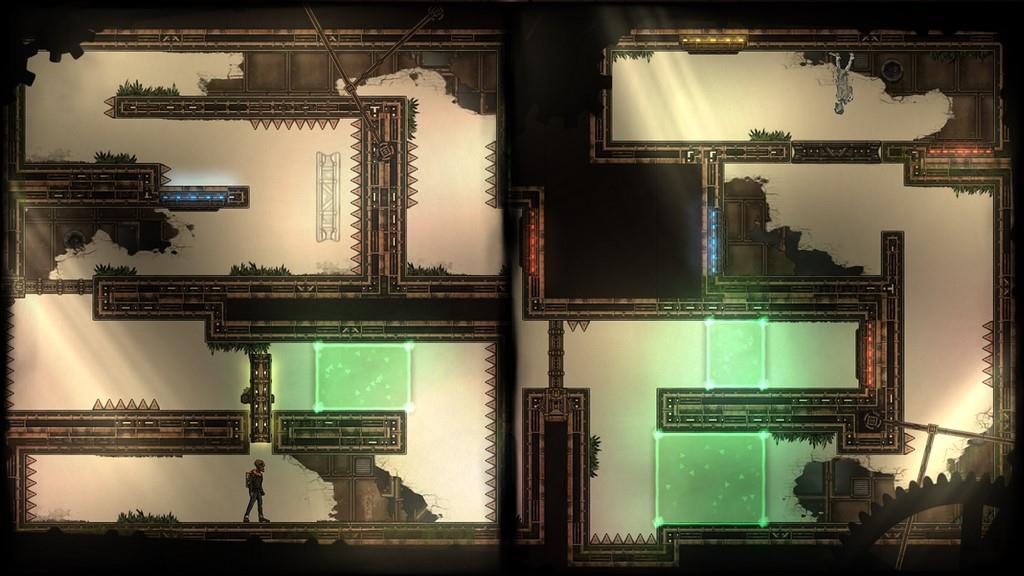 You'll normally get one checkpoint per level, usually right in the middle, halfway between the obstacles. It's not enough. The checkpoint spacing means that you'll figure out a puzzle once, and then redo it several times as you try to solve the second puzzle, then redoing both of them even more times as you try to solve the third. I don't want to come across as disliking difficulty, either, because the issue isn't that the game is difficult, it's that it's repetitive. Once you've made a mistake, there is usually no course correction to prevent your death, so one small misstep means you'll be redoing the same puzzles over and over, just to get back to the puzzle you succumbed to. You rarely feel like you're progressing, and instead feel like you're just spinning your wheels.

Long story short, the gameplay is more often than not simply frustrating, so let's move onto the part that, for better or worse, is the part that seems to have really mattered to the developers: the story, the atmosphere, and their presentation.

The basic story, without giving too much away, is that your character is dying of cancer and, as mentioned above, is going through the various stages of grief. Between acts, you're blessed with a short expository section that introduces the gameplay mechanic of the next stage, as well as moves the story along, with your character reliving events from his past that are reflective of the current stage of grief. These segments are completely focused on the artwork, and they are absolutely gorgeous. I really wish there had been more of these sections, or that they at least lasted longer than the 90 seconds or so that they take. The way the game forms a tapestry of story in these segments, moving from left to right along the beautiful artwork, is honestly incredible. 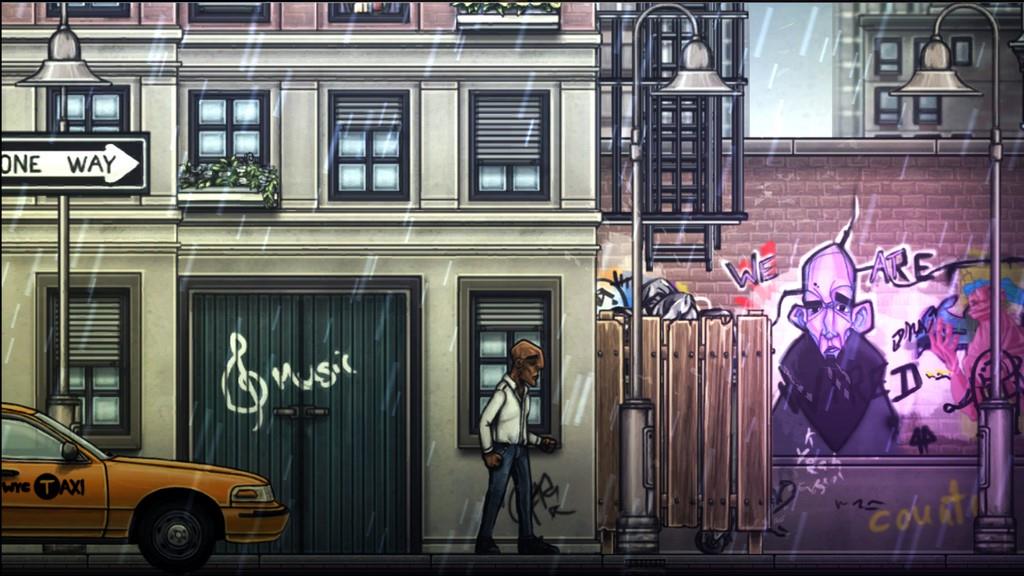 In Between excels at visual story telling. The concept of the mirror images rushing to unite with one another that I mentioned above I really think is a truly beautiful storytelling device, despite the frustrating gameplay implications. Also, the solution to the very last puzzle in the game was such an incredibly moving moment that it almost made up for every other frustration I had with the entire game leading up to it. The music is fantastic, as well, and really seals the deal on the dark, melancholy atmosphere the visuals present.

Unfortunately, the actual writing and dialogue are not that good. Parts of it come across almost like a slam poem someone would write for an open mic night at a coffee shop. One line in particular made me roll my eyes, which was something along the lines of "my books opened worlds that the sounds of the television had been drowning out." For a game that has such great imagery and subtlety within the actual gameplay, the writing is often very on-the-nose and prosaic. I think this might be due to translation errors, however. I noticed in the credits that there were separate credits for the English voice actor (who was very good), and very literal dialogue is often a symptom of translation. Either way, it's not a big problem, but it is worth mentioning for a game so focused on story.

I would have loved to watch someone else play through In Between once they had mastered the puzzles and already knew what to do. It seems like the game just gets in the way of the story that the creators wanted to present to us, which is a shame, because many of those beautiful, moving moments of visual storytelling were really bogged down by the continually frustrating and repetitive gameplay. I can't help but think maybe In Between got a little too big for its britches; if it had gone with a simpler style of gameplay, it would have served itself much better. The side-scrolling in the segues between the acts is so wonderfully done; maybe making the gameplay more like that would have kept the game as cinematic as it needed to be. In Between just didn't quite know what it was trying to do, and unfortunately got caught up in itself.

In Between is full of poetic metaphors and beautiful visual storytelling, but is so bogged down by the awkward and imprecise gameplay that it's hard to enjoy playing it, even if you appreciate its artistic value.