Written by Aidan Kelly on 6/10/2016 for PC
More On: Battlefleet Gothic: Armada

With Battlefleet Gothic: Armada, the team at Focus Home Interactive has done a great job transposing the essence of the Warhammer 40k universe into this real-time strategy game. You play as an officer fighting on behalf of the Imperium of Man. The Empire is under threat from raiding Orks, annoying Eldar stirkes, and a Chaos invasion. The world is split into different solar systems and it's your job to pick who lives and who dies. As the enemy closes in on all sides, the game asks the player to decide the fate of billions of lives. This game isn’t just about winning, its about surviving. You’re not going to save everyone—and losing ships is costly—so warping out to survive can be worthwhile in the long run.

The game has an exceedingly steep learning curve. Apart from a handful of tutorials, the game doesn’t provide much information, and I often wondered why I won or lost missions. You have a limited number of deployments per turn and can action decisions using their fleet. Each battle has a fleet capacity. This limits the number of ships that you can deploy and the bigger the ship, the bigger the price tag. The pace of each mission is brutal and tense. Battles are fought on a small scale compared to most other strategy games. The maps are on the small side, meaning combat lasts around three to six minutes before the timer ends or the AI warps out. This can be tedious when the faster Eldar Corsairs hide in an asteroid field and warp out, causing you to fail the mission.

Not all is lost, however. To action such decisions the player has access to a highly customizable fleet. The fleet is comprised of massive, monster warships and hounding light cruisers. When choosing upgrades for the fleet, it’s important to have a variety of battlegroups. When choosing a deployment, you’re given a number of choices. Cruiser Clash is your typical team deathmatch. Bring lots of firepower and anti-ship weaponry. Or take a walk in Han Solo’s shoes and run some blockades. The game lacks the depth of other strategy games set in space. You don’t control a planet's construction queue or a faction's diplomatic relations. Let's remember, unlike most RTS games set in space, you’re not creating an empire. When choosing deployments you can choose to show favor to factions within the Imperium of Man, which grant special bonuses to the selected ship. Completing each deployment will deliver experience points and Renown to your fleet. Experience points are used to upgrade the captains and their crew, and Renown is used to upgrade ships and commission even bigger death machines.

Of the four factions, only the Space Marines have a full campaign mode. To play as the Orks, Eldar, or Chaos Marine factions, there is a skirmish campaign mode. The multiplayer is very much the same. The matchmaking is harsh. It’s common to be matched with higher leveled players with better fleets. The interface in the ship port is sluggish, and selecting ship deployment detail gets tedious very quickly. However during combat it allows the player to control ships intimately. 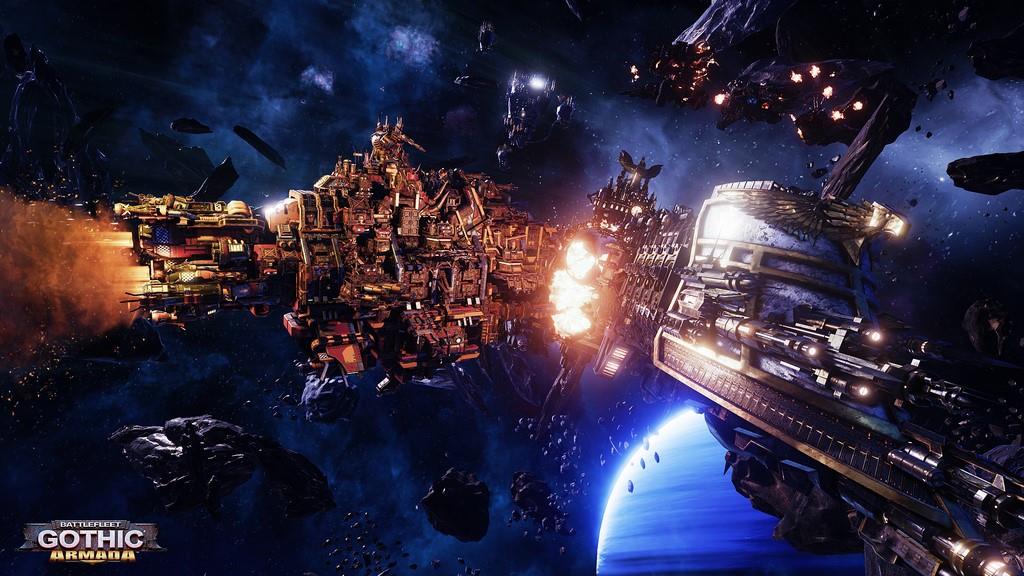 Activating Tactical Cogitators
Each of the four factions have distinct traits and skills which they can develop. The traits and skills are consistent with the board game's lore. Ork ships are undisciplined and reckless, ramming ships for maximum effect. Eldar ships are graceful and sleek and have an elitist condition. Each faction can earn favors by completing the relative deployment on the campaign map, thus earning you Favor. The favors, however, are a one-time use per ship and cost varying amounts of renown depending on the ship type. Other than upgrades earned through favors, there is a regular technology tree through which you can upgrade your ships further. This includes upgrades for shields, maneuvering, cannons, torpedoes, critical-hit chances, deck improvements and so forth. That's just for the Space Marines, too. Each faction has its own suite of skills and upgrades which suit their fighting style.

Here's an example: If I successfully completed a deployment and earned the favor of the Adeptus Astarte, I could add the Terminator Lightning Strike to one of my ships. Ha, yeah a Terminator Lightning Strike. With this perk, the selected ship can conduct an additional assault action before the recharge occurs. Why is this important? During combat the player can select the priority level and focus of the enemy ships. Battlecruisers and cruisers should be set to 1 and 2, respectively. This means that when you engage, those big enemy ships will be put out of action first. You can do this in a variety of ways, and not just on the biggest ships. On all ships, barring transport and escort ships, you can select where to focus critical hits on enemy ships. These include the decks, engines, generators and weapons. To put this heap of information into context: Ork ship ram good. Is fast. A critical strike or two, however—if you have the upgraded favor—can destroy the ship's engines, making it a static defense platform. Well, until you blow the weapons off as well. Once it's completely defenseless, it's fun to change weapon focus to the deck and annihilate the crew while pulling sick space donuts around the helpless chaps. 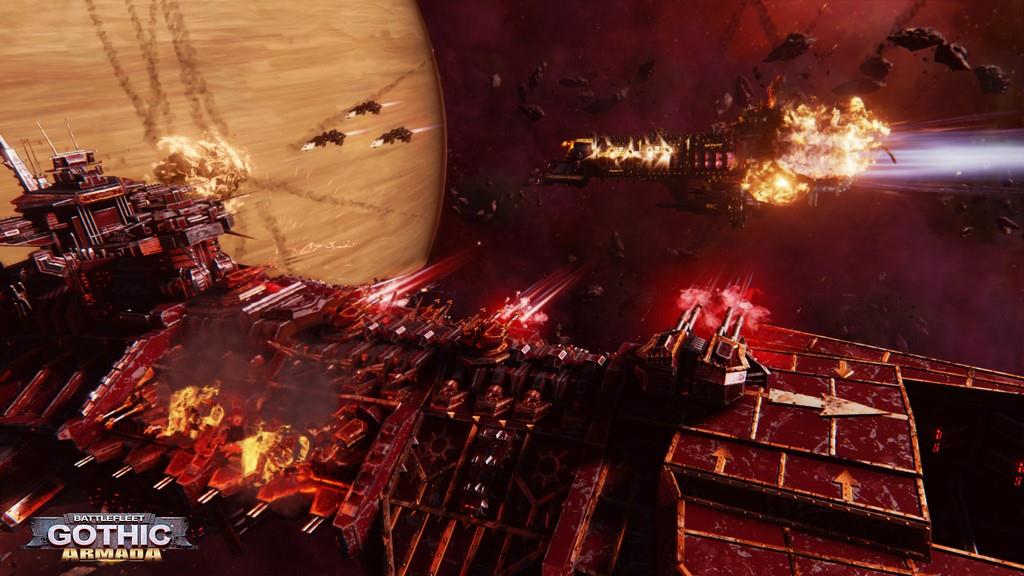 Before each battle you can give specific combat roles to your ships relative to the upgrades you have chosen. I like to equip my cruisers with shield upgrades and a ram. Ramming ignores shields and takes a delicious chunk of the ship's health. Torpedoes ignore shields and have infinite range. With a 50 percent speed boost you can wreck ships before you even engage them. My Battlecruisers orbit at 9K to hack at the larger ships. Each ship has a combustion gauge which is consumed by using special maneuvers. This can be annoying while defending or attacking planets. Having to race to a random point on the map before the AI is frustrating. However this makes every destroyed ship a victory in itself. Dodging enemy torpedoes and menacing Ork cruisers while listening to Danger Zone is a great way to blaze through a 20-hour campaign.

Before I warp out, let's give a special mention to the sound designers. Holy Cogitator does this game sound good. I played it on a 7.1 surround sound system and each salvo fired by the macro cannons resonated in my stomach. Admittedly I had it turned up far too much, but you gotta commit to these things.

Battlefleet Gothic: Armada lacks the management depth found in games like Stellaris and Sins of a Solar Empire. It instead offers brutal, fast-paced, ship-to-ship combat in stunning detail. I loved ramming and watching ships deliver brutal salvos of canon fire. This one is for action-hungry RTS fans with a love of the Warhammer 40k aesthetic.

Battlefleet Gothic: Armada is not your typical space strategy game. It's a fun violent strategy game focused on space combat rather than micromanaging an empire.