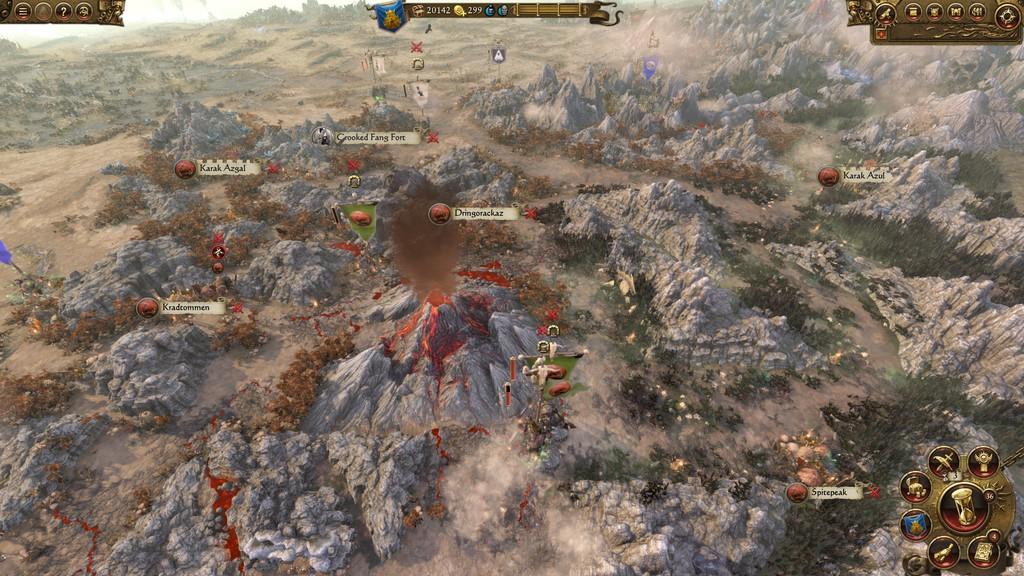 Warhammer has already made the jump from the tabletop to the desktop headfirst and into the deep end. It seems every month another piece of software comes out with Games Workshop branded across the back. Some of these attempts have failed to really capture what makes Warhammer so popular in its original medium. But I think Total War: Warhammer finally hits the nail on the head. The Total War series by Creative Assmebly have been honing their presentation of an epic war experience for some time now, and it's with their expertise that the creativity and storytelling of Warhammer can really blossom.

For the uninitiated, Total War is mostly a campaign based RTS game that highlights massive clashes between competing armies as they vie for territory control and map dominance. While the battles themselves play out in real time (with very handy pause, slo-mo, and fast forward buttons at the ready) the campaign takes more of a turn based formula as your armies have natural limits as to their ability to roam and engage in a given turn. The battles take on both the clashes between regimented armies on wide battlefields, as well as the sieging and capturing of fortified cities in much closer quarters. What Warhammer adds to this Total War formula is a deeper variety in army type and composition and deeper lore from which to craft a narrative around this campaign. The end result is a near-perfect marriage of two strong franchises into something even greater than the sum of its parts.

The first way that Warhammer enhances the Total War experience, is that it introduces a fresh and deep diversity to the factions in the game. Previous Total War titles have focused heavily on specific time periods, and in a justified push for authenticity they rightly lost a measure of variety. Humans are humans, and despite some unit differences and technology generalizations, they tend to move, fight, and govern as humans are wont to do. The Warhammer universe introduces entirely new races and frees Total War from the dogma of historical accuracy. At the outset of the game are 4 races to choose from, 5 if you pre-purchased or bought the game in the first week as the Warriors of Chaos are available as day 1 DLC. You've got your humans in the Empire, Dwarfs, Greenskins (Orcs and Goblins), and Vampires. Each bring their own flavors of troops, movement, and play styles, even if much of the governing is still borrowing heavily from the Total War and following the numbers there. For example, who would have thought Vampires needed to raise taxes of dark magic to raise their armies of the undead, much like the Empire uses taxes of gold to keep fed their garrisons of the living? Death and taxes, right? Even the undead found a way around the former they're still hung up on the latter. It's a bit silly but it keeps that particular campaign going with some form of boundaries. 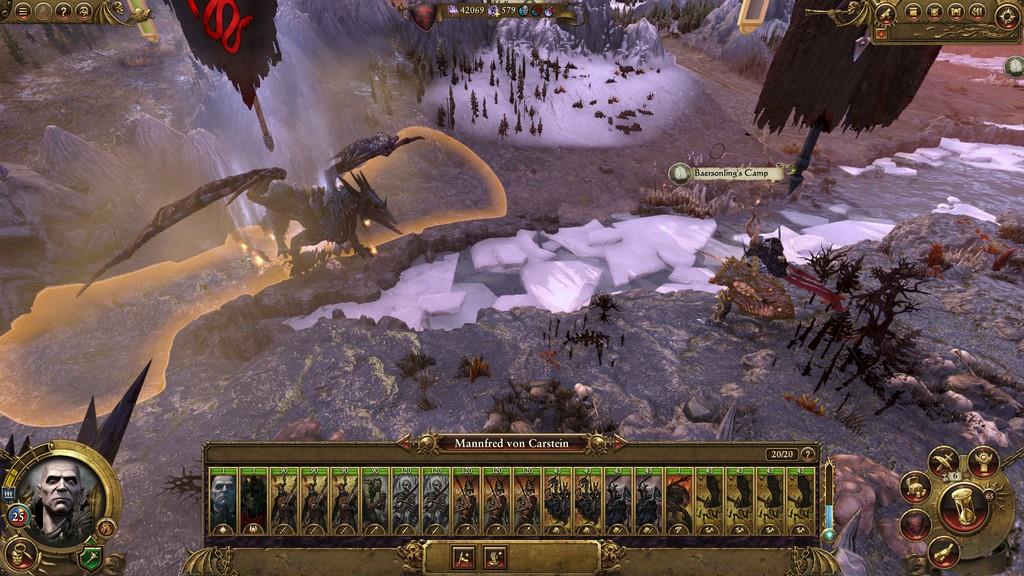 But the differences bring the fresh take on the overall experience, on the battlefield and off. Greenskins act much like the hordes of Attila from the previous Total War installment needing to constantly raid to keep their armies marching, only if Attila also was able to launch giant Trolls and Spiders at his enemies. If you're aggressive enough, you can whip your troops in a frenzy and form a massive force, a Waugh, to keep the fight going at a fraction of the regular maintenance cost for such an army. Dwarfs and Greenskins can skip around topographical obstacles by utilizing underground tunnels. Dwarfs Lords also must avenge grudges in a timely manner or lose the support of their troops. Vampire armies have no artillery to speak of but use giant flying beasts to wreck havoc, and cripple opponents with fear. The Empire provides a more traditional and balanced experience where diplomacy is often as important as conquest. The game takes on very different tones and creates unique experiences among each race, much more so than splitting hairs between a seafaring people or men from the plains locked in a historical reality.

In addition to the variety in races, there are three game modes to keep you playing. There are one off battles that put you in charge against a pre-determined force against a pre-determined foe and a great introduction to the game play. There is the campaign where these battles take place in between dozens upon dozens of turns used to strengthen your territory, find and assault new ones, and maintain your armies. There is also a multi-player mode where you won't be able to fall back on that old pause button I tend to abuse when I'm up against the AI. Campaign is the real bread and butter of the game and in another benefit from this matrimony with Warhammer is how the story that surrounds each of the races fleshes out in a much richer tone than I remember from previous Total War titles. I do find the minutiae of governing my territories, forming alliances, keeping up with the upkeep of my armies, and such a bit of a slog here as I have previously. I just want to fight and often prefer to just load up a battle than grind the campaign, but there are story points in the campaign beyond simple conquest that do enrich the experience more than previous Total War forays. Also the campaign isn't just a free for all. Mostly the Greenskins and the Dwarfs are at each other's throat while the Empire conquers lands as the threat of the Vampires and Corruption draws nearer and more ominous with each turn. 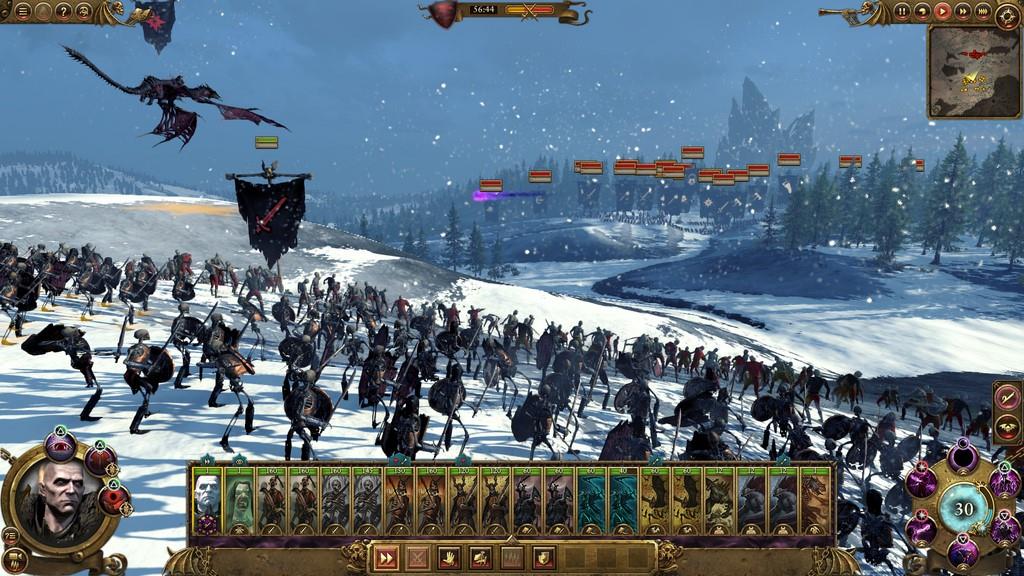 Moving past the slog of the campaign, the battles are the strong suit of the whole experience. And that's where Total War shows off its merits to the Warhammer franchise. Some of the other translations into video games have shorted Warhammer with some average gameplay. Total War brings years of refinement and expertise to the table and lets the battle unfold magnificently. The locations are drawn straight from Warhammer lore and look gorgeous. The tactical options are legion, but most importantly all of the tools are there polished to actually orchestrate it all. After a little practice, you can fly around the battlefield, create groups from your regiments, detail instructions, crush your enemies. It's actually a shame that to really conduct your opera you need to step back to a bird's eye view because zooming in to the detail of the halberds taking down a Troll or a full charge of calvary into the flank of an engaged opponent are wonderful little pleasures. As is seeing a flying minion swoop down to engage a foe, and then see them struggle as the foe fights back keeping them grounded for a time as they try to inflict back as good as they got.

In all this chaos and beauty, you have a Lord commanding your army. Much like a General in previous games, but letting Warhammer again take it to 11, Lords have powerful abilities and spells that can completely turn an engagement. And they're not alone, in addition to Lords are Heroes. Heroes can act like Agents from previous titles, but can also take to the battlefield and, like Lords, engage against rival forces in ways Generals and Agents never could. This aren't just battles where the maestro waives his baton, these conductors can jump into the fray and hammer away on the timpani as well, and to devastating effect. They are powerful fighters outright, easily able to take on a whole regiment of foot soldiers, but unleashing the Winds of Magic elevate them to a level Total War just hasn't seen. Spells can either obliterate sections of an opponent's army or elevate surrounding troops of your own. They stick to an area of effect style mantra and pointed in the right direction or triggered when surrounded by the right allies they can turn the tide on a dime.

In all, the game really does offer tons of content: nearly 40 individual one off battles, campaigns across the 4 races (5 with DLC) each feeling a fresh experience on its own, some 50 different maps to set up custom battles, and multiplayer. The battles are fought across large open plains where terrain itself is a significant actor, sieges to try and topple the defended walls of a town where the action really dos shrink down into much closer quarters, even underground maps where what is hidden from your field of view is often more important that what is revealed. And there is certainly room to expand. There are yet classic Warhammer races and factions (like Lizardmen or Skaven) left untouched that could easily be introduced to spice things up in future DLC. It's not a flawless experience, but it's pretty darn good and really highlights the best of two strong worlds coming together in a perfect union.

Total War has been striving to capture this feeling of Epic iteration after iteration and looking to a historical context for inspiration. But it's the realm of fantasy, the Warhammer universe and its wonderful storytelling, where I think the formula has found its true home. This is probably the best Total War game to date, and certainly the best Warhammer game. Put together the two make wonderful companions. Some of the minutiae of the campaign can be a bit of a slog, but the real artistic genius of this game is when the lore of Warhammer becomes the brush to paint broad strokes across the canvas of the Total War foundation. The end result is Epic. Fantastic battles that can be enjoyed alone, or that become the spearhead of a richer narrative in the Campaign.