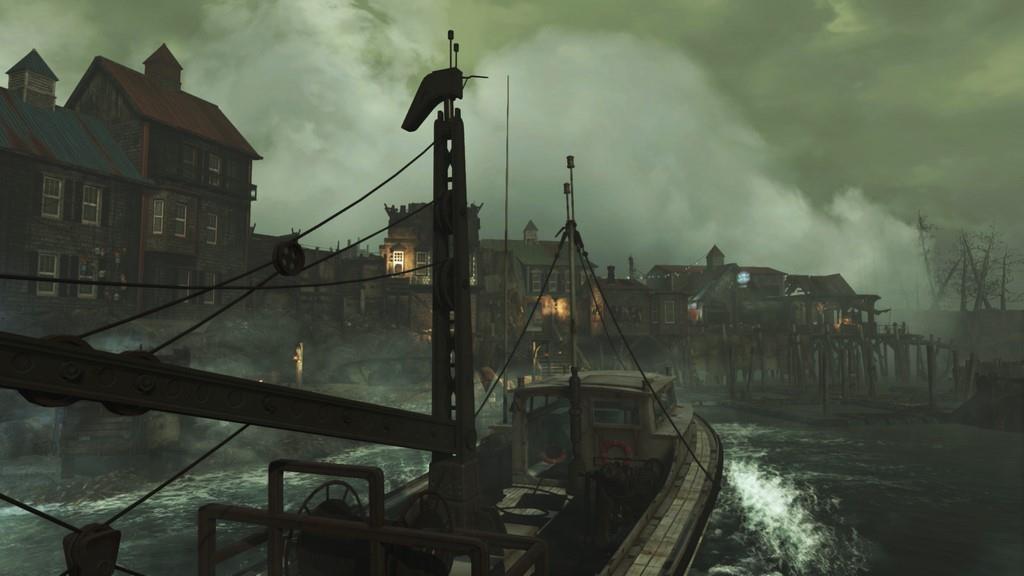 It all begins by listening in on Valentine’s Detective Agency Radio frequency. It’s Ellie Perkins, Nick Valentine’s admin, sending out a call for me to head into Nick’s office. I head into Diamond City and Ellie fills me in on the details. It’s a missing persons case. A middle-aged couple’s daughter is gone. Is it the usual suspects? Is it some new faction taking up body snatching? Either way, there’s a missing kid you have to find. Sounds familiar.

“Are you ready?” Ellie asks.

“The only thing I’m ready for is ‘danger’ and ‘awesome.’ Pew pew pew!” I say. Back in the real world, sitting on my couch at home, I laugh out loud. I really have to start hitting that Sarcastic reply button more often.

Heading up the northeastern coastline toward Maine, I reach the parents’ seaside home. I borrow their fishing boat which takes me further up the coast to the largest landmass developer Bethesda has ever put into downloadable content. I’m in Far Harbor. It’s foggy, foggier than a radstorm; it’s rocky, like Skyrim rocky; and it’s gorgeous in Fallout’s broken-down beauty kind of way. The boat pulls up to the pier and the mystery of Far Harbor begins in earnest.

I’m fresh off the boat when I meet a two-person welcoming committee. One is a woman with short white hair and a level head on her shoulders. The other person looks like Luke from Gilmore Girls with a fisherman’s beard and an itchy trigger finger.

A warning bell rings and we run to “The Hull,” which is apparently the front gate of Far Harbor facing inland. Swamp Thing-looking creatures come loping out of that fog—a more mystical fog than I’m used to from the Commonwealth. The Swamp Thing-looking creatures are called Gulpers and Anglers. Maritime terminology permeates every aspect of this island, even the things trying to kill you. Especially the things trying to kill you. 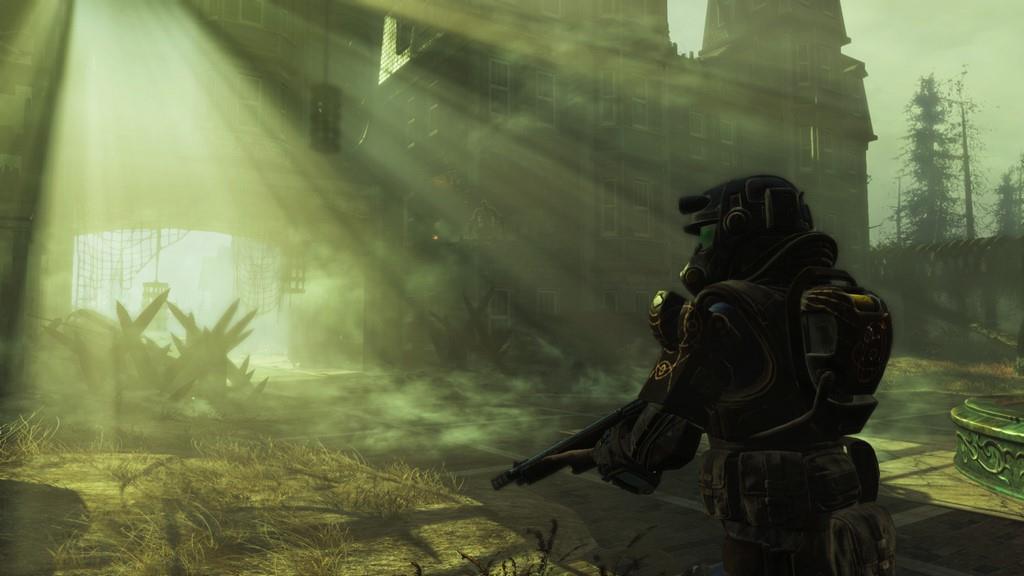 Prior to this writing, the fog slowed framerates in half on PlayStation 4. I’m not one to bellyache about frames per second, but it was bad. As soon as you hit a patch of fog, the game turned into a slideshow. Bethesda went into overtime and rereleased the Far Harbor DLC with a fix. The framerate issues are fixed. Runs as smooth as it ever did, now.

Half a dozen of these Gulpers and Anglers swarm the town’s walls. A few unlucky townspeople try to go toe to toe with them. The fatalities stack up. Dogmeat got stuck down in the fray and immediately had to take a knee, whimpering. The townspeople are throwing Molotov cocktails, but only seem to hit the fence in front of them—or me. People yelling, shoving. I end up down on the street level in the fog. Thankfully the Gulpers and Anglers are too big or too stupid to come after me under the pillars of The Hull, so I survive, pumping semi-auto gunfire into all of them.

The dust settles, or rather the fog. I strip the dead townspeople of the clothes off their back. When in Rome, I dress as the Romans do. So I throw on one of their winter jacket and jeans combos and pull on a wool fisherman’s cap. I instantly fit in. It’s not good armor by any means, but I like to travel light anyway. 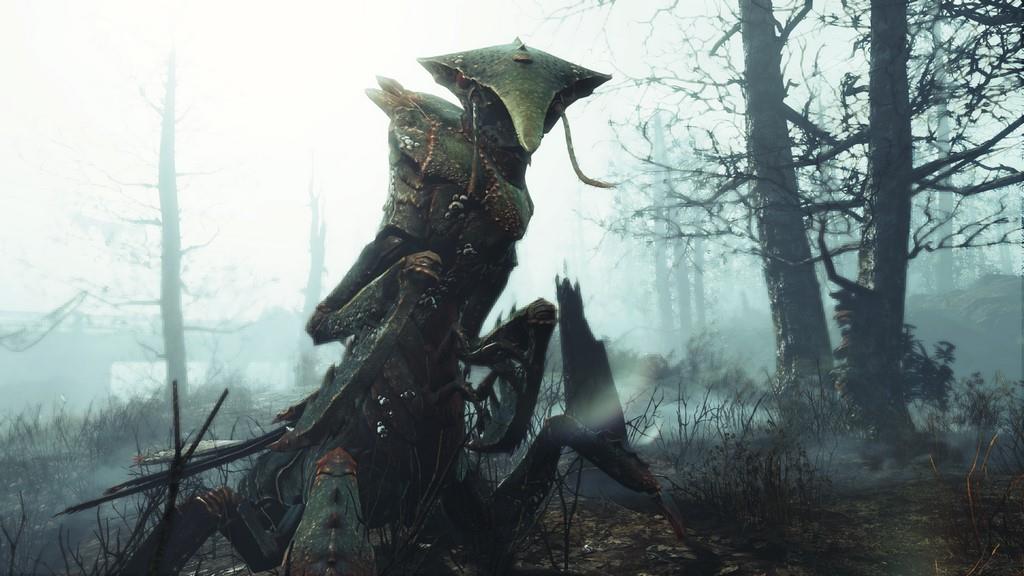 After the fight, I head right over to the weapons shop. I buy a Harpoon Gun. I also spot some new Lever Action Rifle. Even a couple high-damage Meat Hooks. I’d grab one of those meat hooks if I hadn’t already lifted one off a dead islander. There’s even a Pole Hook, like a Meat Hook with longer reach. I grab a legendary version of that Pole Hook called The Fish Catcher. I like the 40% less Action Point cost.

I manage to snag a fisherman’s hat while I’m at it. You know, one of those Giligan’s Island beauties with fly fishing hooks all around it. I also spot something called a Recon Marine Helmet in the next shop over. The guy wants 18,800 caps for it, so, no thank you. That’s a little rich for my blood. Far Harbor, as a DLC, is meant for high-level characters. I’m somewhere in the 40s, so that many caps is a fortune. I pass on it for now. I’m not into heavy armors, but it does look like a fireman’s face mask mixed with a black TIE Fighter helmet from Star Wars.

I find a cooking stove on the dock, right next to a mirelurk they’ve got slowly boiling in a big glass vat. I cook up some poached angler, which gives me +15 Action Points and reduced fall damage for 20 minutes. Wow. There must be some nasty cliffs around here if fall damage is a benefit of cooking up some local cuisine. 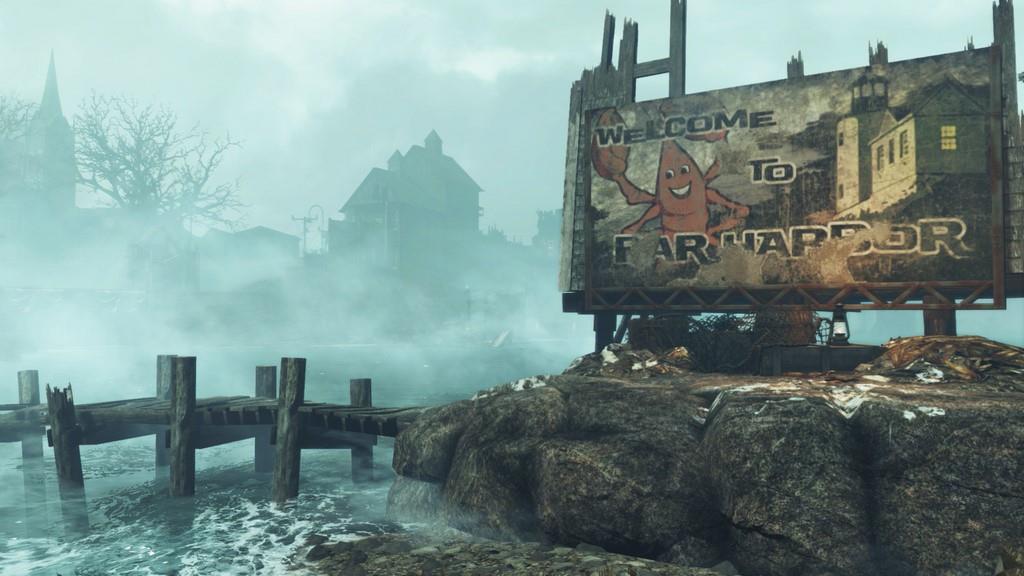 In proper, overreaching RPG fashion, I talk to a few folks and my mission log is immediately overflowing with entries sending me every direction across the island. The first problem to solve: guessing which way to go. Do I tackle the sidequests? Drive down the main storyline? Do some free roaming? What to do? That ol’ open-world game metanarrative is alive and well in Far Harbor. I decide to cut loose and do a little sightseeing just outside the edge of town.

While the game engine is obviously straining, the scenery is striking. Godrays push through the fog in bright, spoked, sunny angles. The fog itself isn’t so much cloaking the island as it is draping it in negligee. It’s sexy fog. Combine that with tall stands of thick-trunked pine trees and it’s almost enough to make you want an Alan Wake reboot. The island is full of fresh new flora and fauna. Black Aster flowers grow from the cracks in the roads. Fiery orange Blight mushrooms cling to the trees. And the verticality of the landscape competes with the most rural portions of the Commonwealth.

With as complex and multistaged as most Fallout 4 missions get, it’s disarming to occasionally run across missions in Far Harbor that are practically “kill 10 rats” in simplicity. On the flipside of that coin, the storytelling is a little more dense than usual. It can afford to be. This being a very specific island with very specific parameters, it’s easy to concentrate the storytelling into a smaller area. Lots of audiotapes. A good amount of terminal reading. And everybody’s got opinions on things happening in their small world. I like the narrative sprawl of vanilla Fallout 4. But I like this narrative reduction in Far Harbor, too. 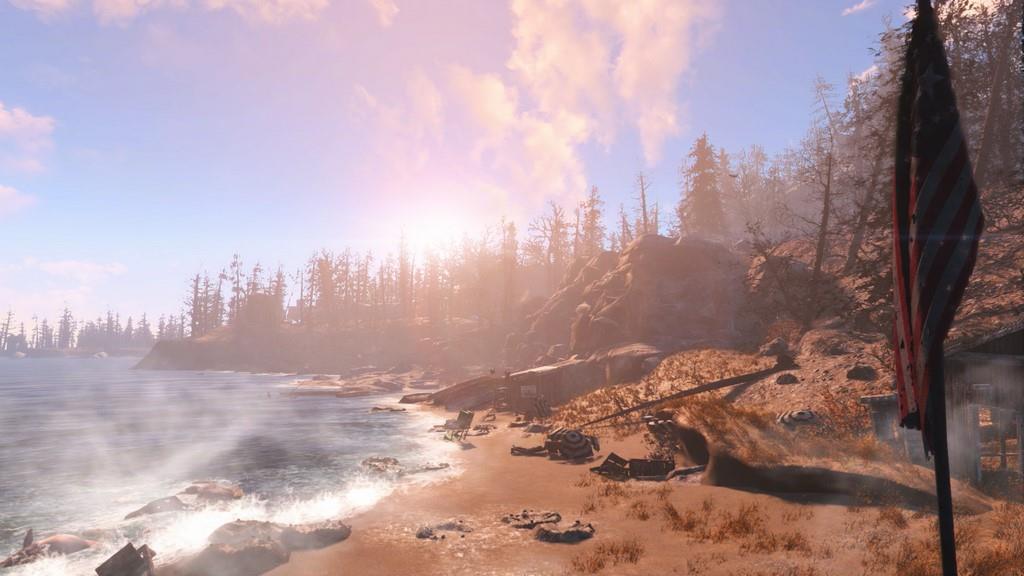 There are myriad scenarios to jump into, and it wouldn’t be Fallout if there weren’t multiple contentious factions to deal with. You’ve got the citizens of Far Harbor proper, a hardy folk that subsist through fishing and work to keep the toxic fog at bay. You’ve got the Children of Atom who, naturally, worship the rad-ridden fog and want to let it rule the island. And there’s a clutch of synths living out here that’ve seemingly renounced their past and don’t want to harm anybody. Aside from the usual (or unusual) faction shenanigans, there are a ton of side quest antics to get into. There’s a dinner theater murder mystery, sort of; a Hatfields & McCoys blood feud, sort of; even some kind of opportunity to act as a holy messenger. It’s always surprising which directions Fallout 4 tugs you in.

Some of those directions introduce you to new creatures. Some of them scared me to death. Whereas some other new creatures appeared to be nothing more than a new shade of ghoul.

Charmingly in Far Harbor, garden gnomes have taken the place of the Commonwealth’s teddy bears. It’s those pointy-red-hat-wearing little gnomes that you’ll find around Far Harbor, motionless, fishing at a small pool in the middle of nowhere. Or meeting you face to face on a remote floating dock. Or standing next to a skeleton with a kitchen knife in its back. It’s the garden gnomes telling the weird little stories around Far Harbor. They’re one-panel comic strips, and it’s always great to run into them. You can tell that those garden gnomes are up to no good, but they just stand there, of course, doing nothing, except making you look at them twice, wondering if they’re only freezing in place when you see them, but handling their mischievous business once you move on. 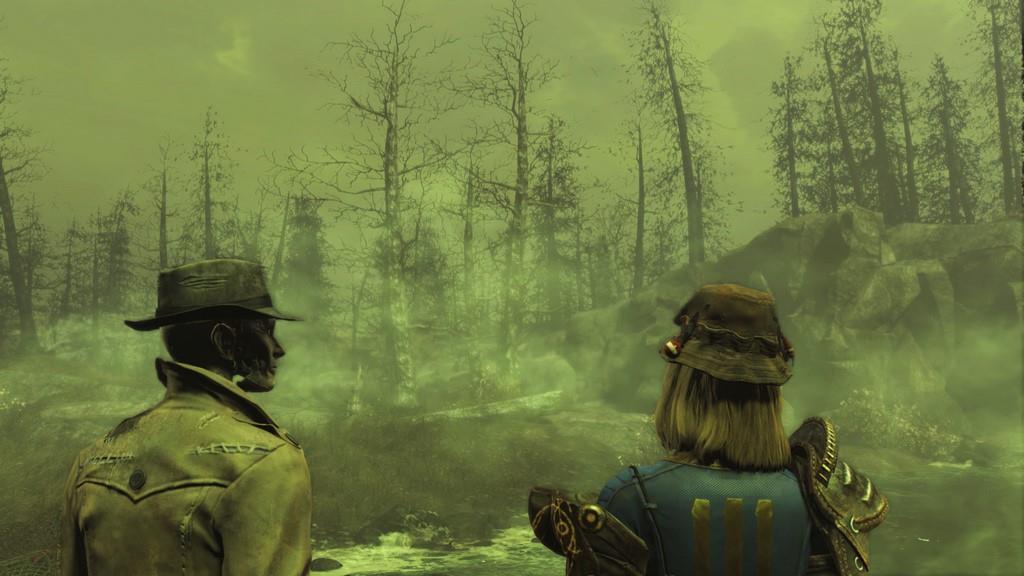 I stopped taking the garden gnomes from these little vignettes. It started to feel like bad luck to move them. Never knew if I’d wake up surrounded by them one day.

The entirety of the Far Harbor DLC is a big pie slice of Fallout, and it does a lot of good things. But there are missteps, especially when it comes to an experimental set of 3D block puzzles.

One mission introduces a series of block puzzles. Figuring out these block puzzles is more like playing Defrag My PC: The Video Game. It’s not in keeping with the mood, setting, or aesthetic of Fallout 4. That wouldn’t be a crime in and of itself—I don’t mind a change of pace—but the puzzles are tedious with the running back and forth, the falling off ledges, and the intentionally bland components. And the last puzzle is a doozy, considering the fact that this isn’t Jonathan Blow’s The Witness (meaning, Fallout 4 isn’t a puzzle game, by any means), and Far Harbor doesn’t prepare you well for its final brain teaser. I feel like it should’ve ramped up slower. At the same time, I’m glad it didn’t last a minute longer than it already did.

Barring that, however, Fallout 4: Far Harbor does good things for an already great game. It’s got a full range of new weapons, from melee fish hooks to bowling ball Fat Man launchers. New armor sets come in both chunky and slick varieties. Chefs get to cook up creatures with effects that do more than just recuperate hit points. Chemists have new plants to pick out in the wild so they can get back to their alembics and Bunsen burners in order to “do a science.” And settlement-building junkies get to play with new barn pieces which let you build walls as tall as you want without having to put in floors. Far Harbor is, ultimately, a microcosm of Fallout 4 that manages to build and maintain its own character. If you’re only buying one piece of Fallout 4 DLC, then make this the 10–20 hours of content you buy.

Far Harbor sits somewhere between a San Francisco noir and a Stephen King thriller. There are things lurking in the fog that you've never seen before. And warring factions fight for both the fog's preservation and eradication. And see if you can stay on task long enough to find the missing girl, too. Far Harbor is a neat collection of short stories in the Fallout 4 novel.