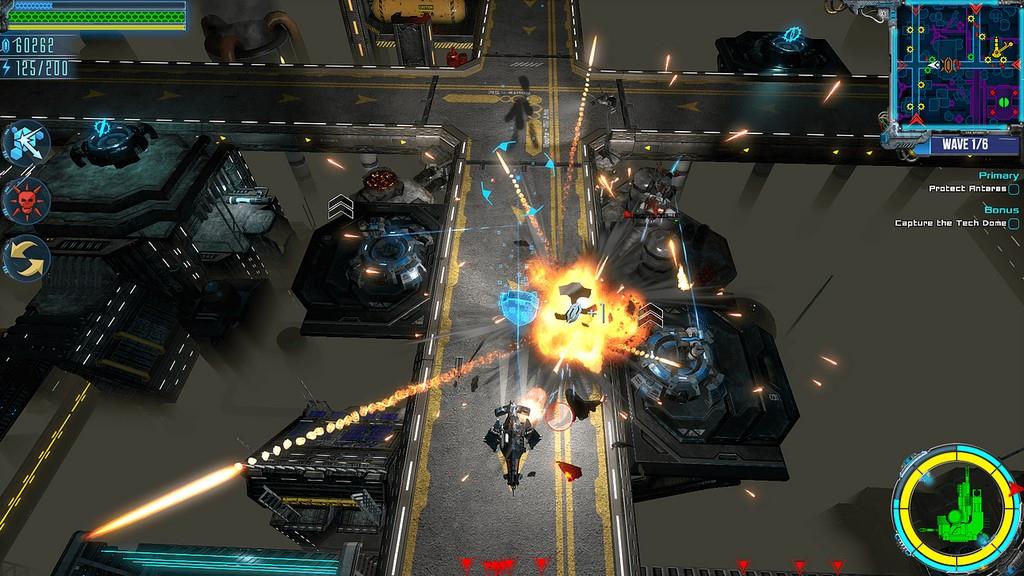 I’ve reviewed a couple of tower defense games here, so I’m not new to the genre, by any means. However, they’ve had a common theme of setting up your towers and watching the magic happen. Granted that’s how tower defense games are played, in general. But what if there was one where you set up your towers but still play an active role by taking down enemy ships yourself? If that sounds up your alley, then you might be interested in Excubitor.

In the 22nd century, a wormhole has appears that allows interstellar travel and creates a bridge to a remote system on which the greatest mineral is found. By 2182, several planets are colonized with the sole purpose of harvesting this mineral, known as the "voidshard," which provides mankind with all of the energy it will ever need. Around this time, a ship called the GRB Anteres is stationed on the planet Farris with the intent to research new deposits of the voidshard, but receive a distress signal from a nearby base on the planet’s surface. This is where the game begins.

The game is generous enough to give you the option of playing the tutorial. If you’ve never played Excubitor before, I highly recommend playing the tutorial to get the hang of it. Similar to other tower defense games, you have a limited number of resources with which you can use to build towers at designated locations on the map. However, instead of just moving a cursor around the map, you actually fly your ship, the Hammerhead, around the map to not only place turrets and such on the map, but also take part in the battles yourself. As you’re flying around, placing turrets and taking down enemies, you’re doing all of this while guarding the Anteres. You can see its health and shields, so you have an idea of how much damage it can take before you really need to take out the enemies surrounding it. The Anteres can sustain a decent amount of damage as long as it’s not completely swarmed with enemies. But you still need to keep an eye on it as once it does get swarmed. It’ll go down rather quickly. The main goal is to protect the ship until you clear out each wave of enemies, simple as that.

The Hammerhead starts out equipped with two machine guns that are fired with the mouse buttons. As you fly around the map, you’ll use the mouse to hover your aiming reticule over an enemy; when it turns red, you can fire your weapons at it. This can seem a little strange at first since if you’re not aiming at an enemy as you’re firing—your shots won’t hit it even if the shots are going in the same direction that the enemy is in. However, it doesn’t take long to get the hang of this mechanic. Plus the tutorial also helps as you can somewhat play it as much as you want, which comes in handy for the next thing to discuss: upgrading the Hammerhead.

After each mission you can upgrade the Hammerhead in two ways: increase the abilities of the ship itself, and buy and upgrade weapons. After each stage you get a module or two that you can use to upgrade the ship’s shields, weapons, armor, and maneuverability. While your decision is final once you confirm it, you can spend some voidshards to reallocate your points. As for your weapons, you start out with two machine guns but you can unlock and purchase new weapons along the way, such as a pulse cannon and proximity mines called Warthogs. (I really don’t see the correlation of a mine being called a Warthog, but I digress.) Each of these weapons can also be upgraded to improve stats such as their damage output, damage type, and reduce their cooldown time. Unlike upgrading the stats of the ship, you can change your upgrades and get any voidshards refunded to you from them. For instance, if you decide you no longer want two machine guns and want to swap out to pulse cannons, but you used a lot of voidshards to upgrade those machine guns, you can remove all of the upgrades, get those resources back, and use them on the pulse cannons. Normally I’d be against free point reallocation, but here I don’t mind it. Why is that? 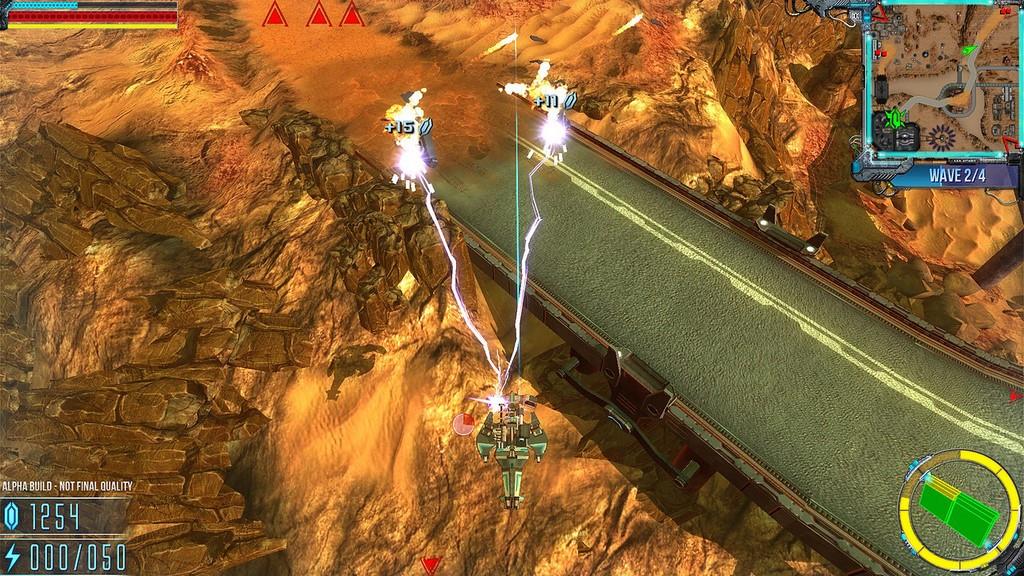 Because while I enjoy the game, the difficulty ramps up early. The first stage (not counting the tutorial) is pretty simple. Just follow the instructions that the AI voice gives you and you should clear it without issue. The second and third stages begin to give you some more difficult situations where you have multiple fleets of ships coming at you at the same time during each wave. You have to start strategically placing your turrets to make sure you don’t get bombarded by ships coming from one direction while you’re busy taking down ships in another. All that said, it’s still quite managable. With the right skill point allocation, it’s not all that bad. Then there’s the fourth stage.

This is where you really get put to the test. A giant ship has a huge weapon that’s capable to wiping out entire civilizations. Your goal is to take out this weapon, which sounds like a reasonable task. The problem lies in that not only do you have your standard swarms of ships to take out, but the giant ship itself has two machine gun turrets which respawn a couple of minutes after they’re taken down, two giant missile launchers which can fire off a ton of missiles at once, and the giant laser will decimate you unless you take cover behind one of the limited number of meteors whenever it fires—and it’ll fire twice each round and each time it’ll destroy a meteor. This is where the difficulty jumps up, as I had a multitude of problems with this stage. If you get anywhere near the ship you just get bombarded with machine gun fire and missiles, plus you still have to place turrets to protect the main ship. This stage is all about putting your modules in the right places and making sure you have the voidshards left to upgrade your turrets during the stage as well as possibly selling and re-building the turrets when the giant enemy ship moves every few minutes. It’s not impossible, but I wasn’t expecting things to ramp up like that so quickly.

In a way, I’m not really against that. I’ve stated many times before that I love a good challenge, so long as it’s a fair challenge, and this mostly is. I say "mostly" because there is one thing about games with skillpoint/money allocation that tends to rub me the wrong way, and that’s when you allocate them incorrectly. I enjoy games like Diablo II, Borderlands, and the like because there’s no "wrong way" to build a character (though my very first Diablo II Necromancer says otherwise), meaning that while some builds work better than others, there are multiple ways to clear various areas and challenges. Here though, it felt like unless my voidshards and weapons were spent and allocated in just the right way, I wasn’t going to get past that giant ship with its massive weapon. In the end, it took two modules for my shields, which allowed them to regenerate when I’m not in battle, and one to my weapons, plus two fully maxed-out machine guns, and my going all kamikaze on it to take it down. And even then, it was a somewhat close call and I died two or three times. Thankfully you respawn once you die, and I’m guessing it’s unlimited respawns until the Anteres bites the dust. I’m not saying it’s unfair, just that I’m surprised it was that difficult after the three previous stages that were much easier. 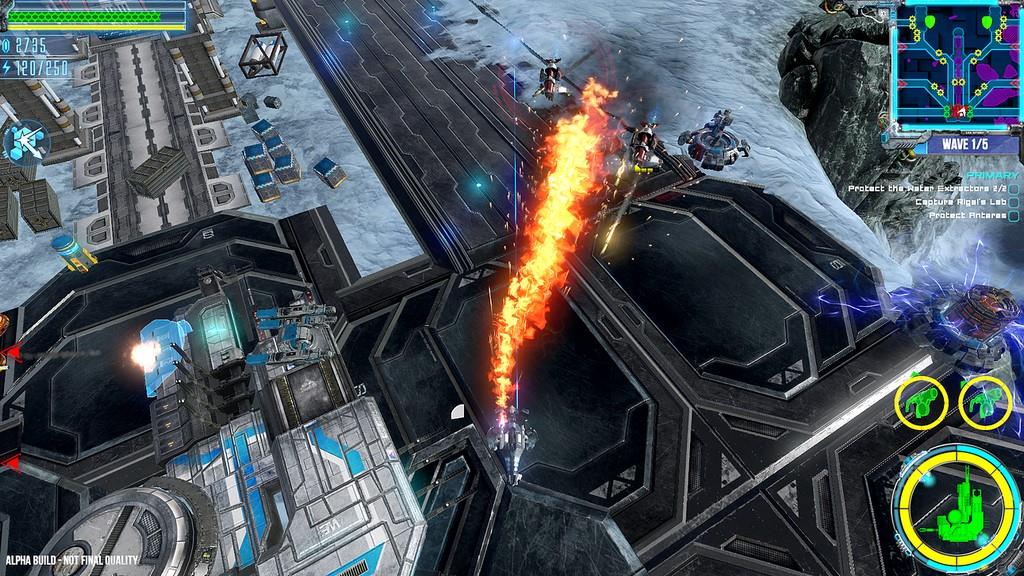 In terms of looks and sound, Excubitor excels pretty well. My only real complaint there is that due to the camera's perspective, it can be hard to take down enemies in a timely manner before they reach the Anteres. This is because you can’t fire at a target until it’s somewhat close to you, though if you’re near the Anteres an enemy ship will usually direct its attention at you instead and take its fire off the Anteres. The game also provides a mini-map that not only shows where enemies will enter and the paths they will take, but also the locations of where you can place turrets, and if the Anteres is under attack. You also have a gauge that shows how much health and shields the Anteres has left. So if you see either start to plummet, you know to quickly turn around and defend the ship.

Excubitor is a pretty fun game, but not without its challenges. If you find the normal difficulty to easy, you can play the game on hard or insane difficulties to up the challenge, or you can unlock New Game+ which is considered the hardest difficulty of the game. I didn’t quite get that far. Given that you can also replay any stage to better your score and gain more voidshards, there’s quite a bit of replayability here. I also enjoy that instead of just building your towers and sitting back to watch the action, you take on an active role. If you like tower defense games and are looking for a challenge, Excubitor might just be your game.

The Steam community greenlit Excubitor—and it's apparent why. It's a fun and challenging tower defense game with a twist, steeping you in the action instead of having you just sit back and watching everything unfold.