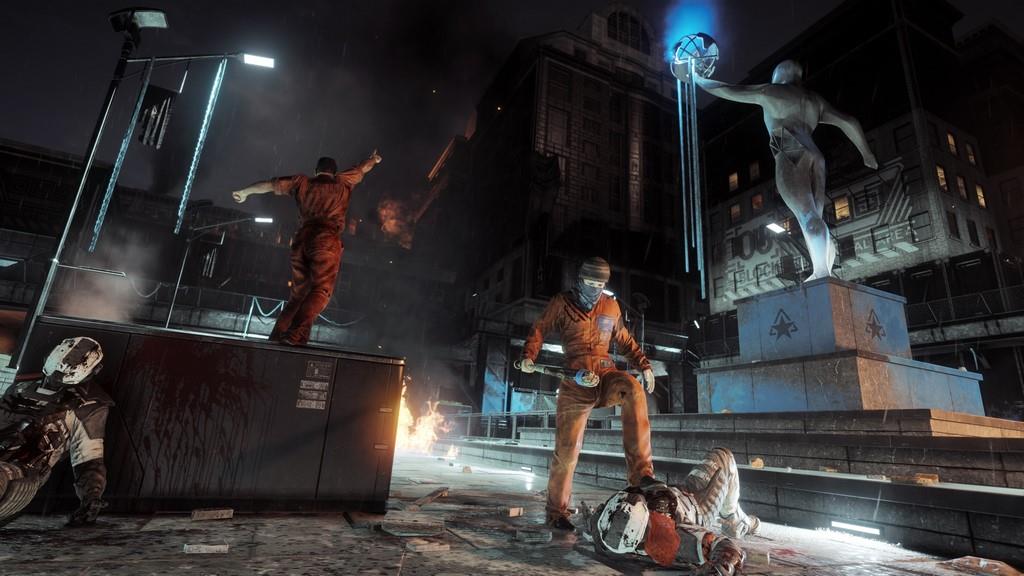 Written by Nathan Carter on 6/3/2016 for PS4
More On: Homefront: The Revolution

Homefront: The Revolution is one of the most heartbreaking games I have ever played in my life. Not because of the story but because I know that this could have been a great game but sadly, there are so many issues with this game that completely ruin the entire experience. The first game was a decent shooter with a cool story about the United States being taken over by North Korea and as the name would imply, you join a resistance and try to fight back against your new overlords. Homefront: The Revolution is a soft reboot of the series with the idea of the US being occupied still there but the story and the gameplay is different this time around. I wanted to like this game, I wanted to love it, there are so many great idea here, and there is fun in some places, but sadly, the game's issues completely destroy what could have been.

Homefront: The Revolution is more of a reboot with a new story and an open world setting. This time around, the game takes place in an alternate timeline where North Korea was the one behind the huge technological boom and within time, the Korean company APEX is at the forefront of all of the worlds technology including smart phones and tablets. Then they eventually decide to get into the weapons and military manufacturing business. The United States's entire military is all APEX equipment and after years of the national debt growing out of the control, North Korea decides it's time to collect. They use a backdoor program to shut down all of the USA's defenses and we are pretty much sitting ducks for an attack. The KPA comes in and takes over. Now it's your job to take over the city, push back the KPA and start the "revolution" The story at first has promise but then the issues begin. It's so hard to care about anything going on when all the acting from the characters is just so cliche and the character you control, Ethan Brady, is a completely silent protagonist so it's incredibly difficult to care about anything you do in the game. Every story beat feels like they are just checking off a list of the same lines and plot devices you have seen a thousand times before.

The most enjoyable parts of the game come in the form of it's missions and side quests. I will say this that the parts of the game when you aren't on missions and you are going around the city trying to sabotage the KPA are incredibly fun and do make you feel like you are part of a resistance. Sabotage ranges from taking cutting the power from generators so the KPA can't spread their propaganda messages, destroying KPA vehicles, and taking out high value KPA targets. Let me tell you, sniping a KPA general marching through the streets and then watching his soldiers scatter around trying to find the perpetrator is so satisfying. All of this sabotage will boost the morale of the district you are in and when it reaches 100%, the citizens will rise up and rebel against the KPA. 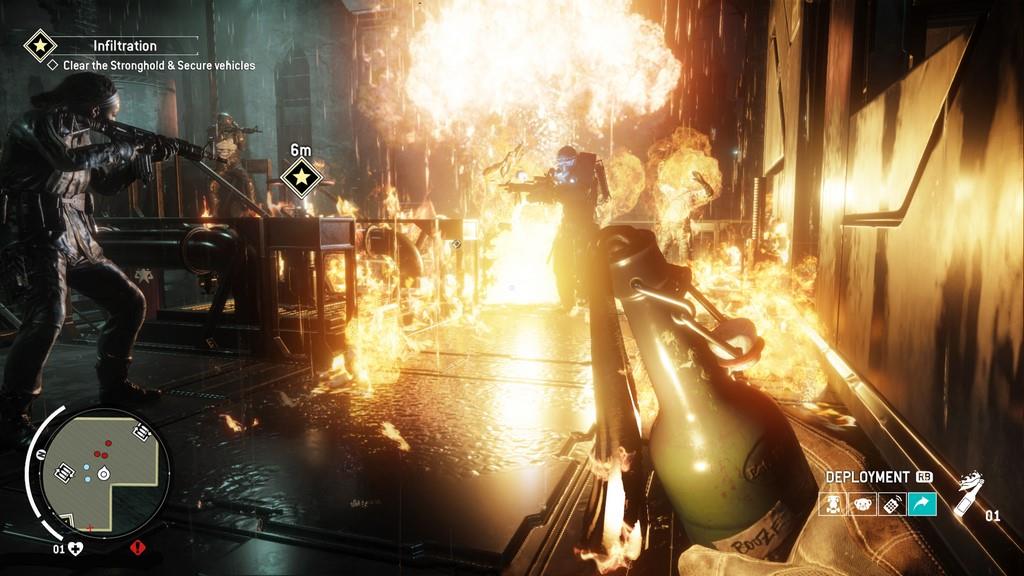 The first time this happened, I was hyped and It actually felt like what I was doing mattered. I reached 100%, and I watched a cut scene of the people rising up, taking on the KPA. I then sat there in the safe house, I could hear a ruckus outside, gun fire, people cheering, people shouting. This was it! They were fighting back! I ran to the top of the safe house, expecting to see the city in an absolute uproar, this is America damnit, we aren't just gonna let you take our home! I walked out into the street to see a massive crowd of....... no one. I stood there and looked around and everything looked as if it did before. I saw a feel people walking around but that was pretty much it. Meanwhile I can hear a huge crowd in an uproar and loud gunfire, but these people were nowhere to be found. This is the biggest problem with this game is it feels like the game would rather tell me that these things are happening rather than show them or have you participate in them. At the very least, there is a decent amount if variety in this game as story missions all feel different and there is a variety of other things to do to keep you occupied. The other positive I can give this game is in the gun modification system. Usually with other games, when you upgrade your weapons, you are locked into said modification. With Homefront, you can change your gun on the fly. You can take an assault rifle, equip a scope, silencer, and a grip all at once while you are out in the field.

What brings the whole game down is the abundance of technical issues. From horrific frame rate, atrocious enemy and companion AI and stiff controls, these issues ruin what should have been a great game. I even thought I had encountered a game breaking bug at one point where someone I was supposed to follow on a mission was frozen in place and wouldn't move. The mission wouldn't progress until this character go to his destination so I had no idea what to do. I couldn't cancel the mission, or proceed and every time I died, it would just load me back up at the checkpoint which said character still frozen in place. It wasn't until I exited out of the game and restarted it that the problem fixed itself. The other huge problem with the game is the absolutely atrocious frame rate. Some games these days struggle to hit 60 FPS and kinda bounce in between 30 and 60. Homefront can barely hit 30 FPS, which makes the entire game a gigantic stuttering mess. Aiming is incredibly difficult because the controls feel so stiff and the frame rate doesn't help things at all. Not that it really matters though since the AI is pretty terrible and sometimes enemies will just stand in place while their buddies all run around trying to kill you. Sometimes the AI is just plain unfair. You will be sneaking around and then all of a sudden you will notice gunfire coming your way. Somehow, a guy with only a pistol was able to see me a mile away and started shooting. 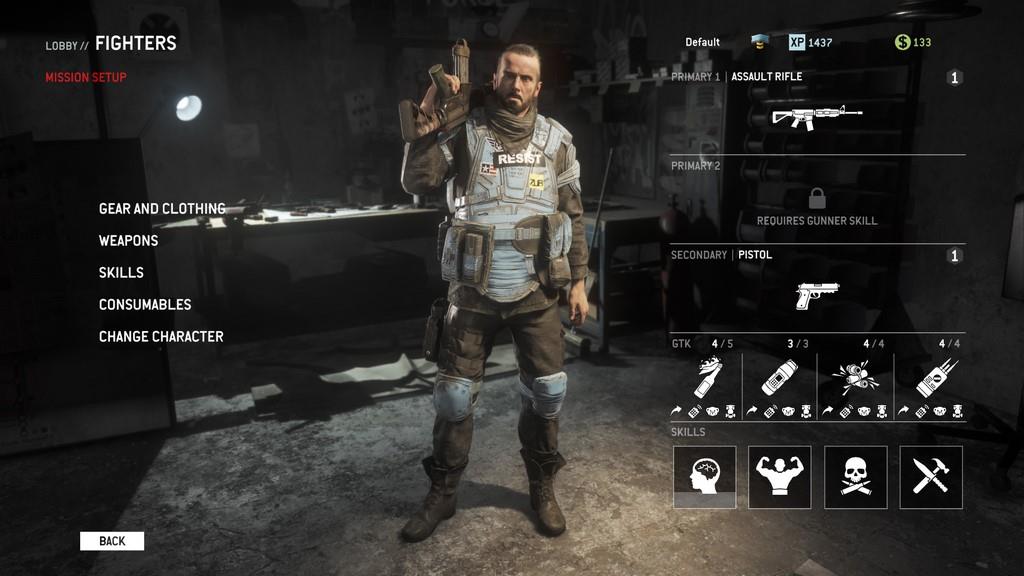 There is one cool feature where you can bring other members of the resistance with you on missions but you have no way of controlling their actions. The game says that when it's probably best to sneak past enemies when you are in red zones. Well if you have teammates with you, you better be ready to fight because they do not sneak around at all. Usually they just run right into the middle of gun fights and get killed instantly. Actually, I found them quite useful just to use them as distractions while I ran to my destination. Last but not least, there is the fact that the game freezes every time you hit an auto save. Yes, whenever an autosave occurs, the game will literally freeze for about five seconds or so before letting you take control again. Get used to this happening because there are a ton of auto saves. You will be in the middle of a battle and the game will just freeze. This game was really depressing to play because I actually enjoyed the first game and was looking forward to this. There are so many great ideas and elements here to make a great game but they are all just completely drowning in a sea of severe technical issues

This was probably the most heartbreaking game I ever had to review because I know this game went through so much developmental hell to get released and it really does feel like they tried, but sadly, the end product is just too broken to recommend