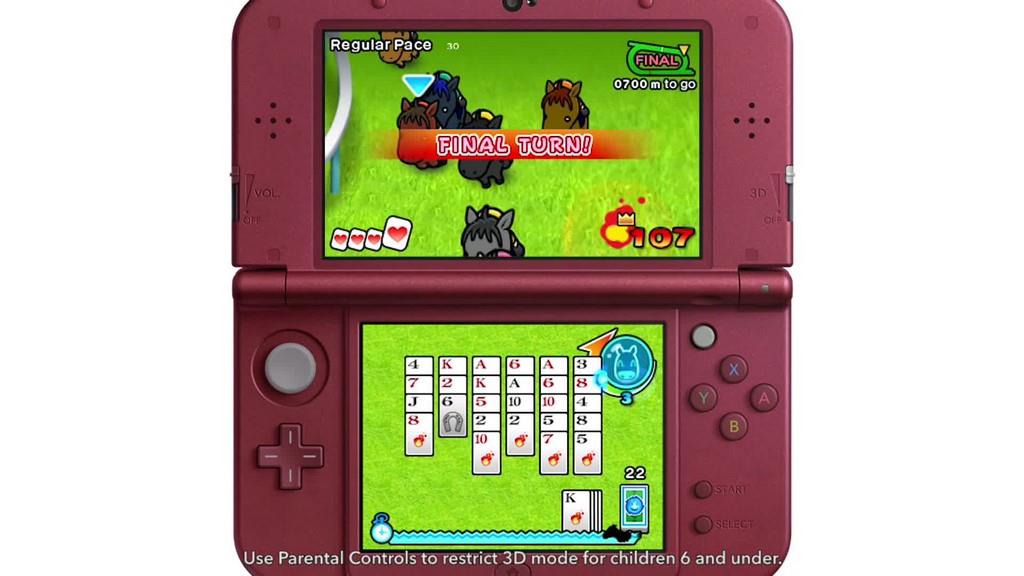 There are a lot of things in the world that just go perfectly together: peanut butter and jelly, spaghetti and meatballs, ranch dressing and just about anything else.  Then there are pairings that you kind of have to tilt your head and wonder how they make any sense, such as horse racing and solitaire.  Believe it or not, that’s the basis for Game Freak’s Pocket Card Jockey for the Nintendo 3DS.  I don’t know much about horse racing, but I do like a good game of solitaire now and then, so let’s see how these two go together and whether or not they work.

In Pocket Card Jockey you play as an aspiring horse jockey whose goal is to win some of the racing world’s biggest horse races.  Problem is your jockey is a complete dimwit who doesn’t know the first thing about horse racing.  He does like a good game of solitaire though and…well, that’s how this mash up comes to be.  In the simplest of explanations, the goal of the game is to raise horses, win races, breed future champions, and all while playing solitaire.  Sounds like the perfect combination, right?  Yeah, my first reaction when offered this game to review was that “it sounds…interesting”.  It’s time to see just how interesting it is.

To start off with it’s kind of a good thing that your jockey doesn’t know much about horse racing as the game gives you a lot of info about the various types of races and terminology.  Once that’s done you’ll get an intro as to how the solitaire portions will work.  There are several variations of solitaire that you can play in real life and the version the game uses is a variation of Golf Solitaire.  You’ll have several columns of cards with a few cards in each and the rest of the cards are set aside as your deck.  You begin by taking the bottom-most card from any of the columns and discarding it.  After that, each card you discard must be one value higher or lower than the top card on the discard pile with aces being both high and low.  If you can’t discard any more from the columns, you take the top card from the deck and put it in the discard pile, then start discarding from the piles again if you can.  Repeat the process until either the piles are all gone or you run out of cards in the deck and can’t discard any more.

So how in the world does that translate into a horse race?  Well it all starts at the beginning of the race as you have to play a small game to get out of the gate.  It’s worth noting that your games of solitaire will be timed but most of the time you have a very generous time limit.  That’s not the case here as you have roughly ten to fifteen seconds to uncover and take one of five cards that spell START.  Each of these cards will have one to five orbs on it and the more orbs on the card you take, the more unity power your horse will have, but the longer you take to pick a card, the farther back your horse will start in the race.

Once the race begins you usually have about two to three games of Solitaire to play that influences how you do in the race.  Clearing cards will earn unity power and clearing the entire table will earn you bonus power.  That power is then used to move your horse around the pack between games to put you in position to earn more energy, plus any unused power can be converted into energy.  As you position yourself on the track you can collect bonus cards that you come across to help level up your horse and increase your stats. 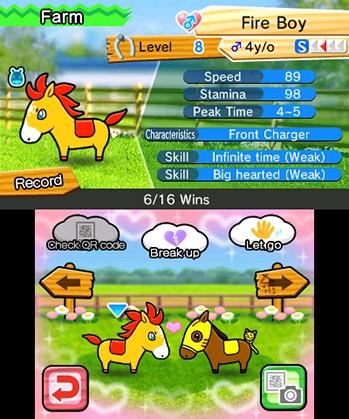 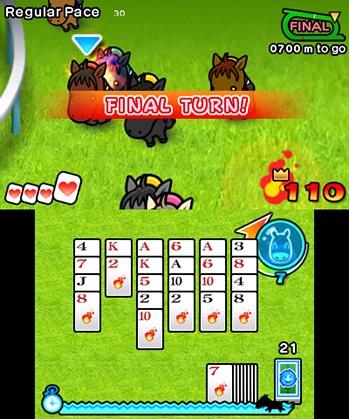 Once you get to the homestretch, the amount of energy you have will determine how you initially do in the final leg of the race and this is both a nice mechanic, but also a minor issue which I’ll touch upon in a bit.  You will then have a chance to move your horse up and down on the track and give it a small speed boost if you have any remaining.  After each race you’ll see a screen where you’ll see how much experience your horse gains and after a certain amount of experience they’ll level up and possibly gain better stats and skills.  You can also purchase items in a shop such as temporary stat increases as well as puzzle pieces that, when they make a full puzzle, can increase your stats even more.

However, a horse can’t race forever.  Once a horse becomes four years old, a new option opens up known as Mature Mode.  While you can’t level up a horse that’s matured this far, you can still race them until you think they’re ready to retire from the track.  After retirement you can also breed horses and in turn they can produce offspring that can eventually be used for racing.  The stats and skills of the offspring all depend on the parents, so breeding two champion horses can result in an offspring that will do remarkably well once it’s old enough to race.

Pocket Card Jockey is one of those games that just hearing the concept made me scratch my head, but surprisingly it works rather well…for the most part.  There aren’t that many horse racing games available that I’m aware of and I’m personally not into horse racing, but I keep finding myself going back to this because I am a fan of Solitaire.  While it may just seem like you’re playing a game of Solitaire and letting the horse do its thing, there is a decent amount of strategy involved with what you do between games.  Since you can move around between each round of Solitaire leading up to the homestretch, you have to consider what your horse’s strengths and weaknesses are.

For instance, does your horse do better trailing the lead horse for most of the race, or is he better off taking a stance little further back?  Should you stick to the inside of the track to conserve energy during turns or lean a bit more outside to avoid the rest of the pack and get a clear path in front of you.  Where you move your horse between rounds of Solitaire can make a lot of difference as to whether you will sprint ahead in the homestretch or end of lagging behind and place rather poorly.  With all of that said, there’s one time in which strategy seems to get thrown out the window, and that’s the very start of the race. 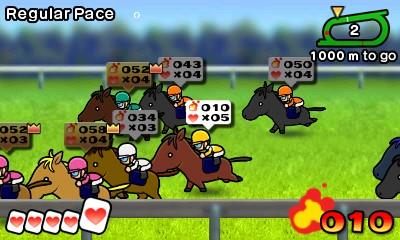 Here’s what I was referring to early when I said I would get back to this.  I mentioned how starting a race works and how little time you have to get a START card.  Naturally you’d want to find a five-orb card before time runs out, but I’ve found the best option is to just take the first card you find as the longer you take to pick a card, the worse you do at the start of the race.  In other words, when starting the race it’s better to be fast than to find the best card as waiting until the last moment to select a card might just doom the entire race from the start, no matter how you do during the rest of it (I’ve lost races where I had perfect Solitaire rounds throughout due to how bad I started off).

Graphically the game isn’t all that bad but the animation is minimal outside of the homestretch.  The period of time where you shift your position on the track between games of Solitaire is basically represented by a bunch of numbered circles, but the animation for the homestretch portion is nicely done.  Then again this is a seven dollar 3DS title so I’m not expecting the greatest graphics of all time, but the game doesn’t really need them.  The game mechanics are pretty solid, starting of a race notwithstanding, and the races only take a few minutes to complete, meaning you can get in a race or two in a short amount of time if you don’t have a lot of it to spare.

Pocket Card Jockey is a game that anyone can get into, even if you don’t completely understand everything about horse racing.  I went into this with hardly any knowledge of the sport and still enjoyed it.  Whether you want a game to pass the time that you can play in short bursts or you think the pairing of horse racing and Solitaire is the best thing since sliced bread, Pocket Card Jockey is definitely worth a look, but if you’re still not quite sure about it, you can check out a demo on the 3DS eShop.  Either way, I recommend checking this one out.

Pocket Card Jockey is somewhat addicting and is fun to play and can be done in short bursts.  Even if you don’t know anything about horse racing, most people are likely familiar with Solitaire in some form and the game does a nice job of teaching you about the mechanics of both.  As a low-cost title and with a demo on the eShop, Pocket Card Jockey is a fun way to pass the time.