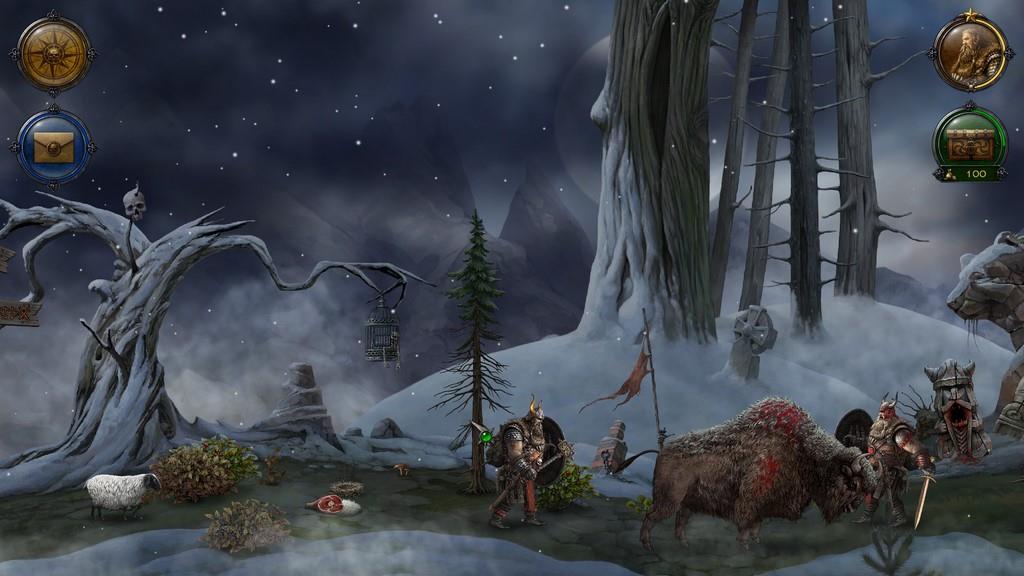 Simulation survival games were never my forte.  When I tried my hand at The Sims, my Sim ended up getting killed off by a swarm of bees.  My Sim City…city never had a single citizen in the twelve game years it was around (though that was purely my fault).  As for Minecraft, my elaborate shelter is basically a hole in the ground.  It’s not that I don’t like them, it’s just that I’m not that good at them.  So what happens when I play a sim/exploration-style game where I basically start from scratch?

Welcome to Niffelheim, a 2D exploration game with a Nordic setting.  Your initial goal is to basically survive by wandering around mines, gathering materials, building workstations that let you build and make things to help you survive, and eliminating any threats that you encounter.  I say that’s the initial goal as there is more to the game, but as this is Early Access I’m not sure how much is actually playable as I found a couple of areas that stated they were still in development.  I also spent most of my time wandering around various mines or dungeons or whatever you wish to call them, though the game description states you can “enslave an ancient force to conquer enemy lands”, so there’s a lot more to the game that I haven’t experienced yet.

The game starts out at your castle which starts out as nothing more than a small shack.  In terms of gear you begin with an axe, a bow, and a sword and you can wander around outside your shack and gather materials you’ll need to improve it.  This is incredibly tedious.  Outside you can gather stuff such as timber, twigs, and animal fur, but that’s not going to get you very far.  In fact, it’s not going to get you anywhere.  To build just about anything you’ll need more materials which means it’s time to travel down into the mines, and the best place to start is the one your shack is sitting on.  From time to time you’ll also get notices that your castle is under attack.  Thankfully you can warp back to your castle for a little gold to take care of matters and once you begin to improve your castle it’ll also help with keeping it safe, but it might take some time to get to this point.

Going through the mines is probably the most tedious task I’ve encountered.  Aside from the somewhat slow movement of your character you have to move about the mine while picking up anything you find that might be useful and using your pick axe (which you find rather quickly) to mine various walls and floors.  Thankfully it’s not all slow and tedious as, somehow, there are enemies to fight in the mines, but the combat is probably my least favorite thing about the game so far.  First off you have two weapons to start with that are “suitable” for combat: the bow and the sword.  I’ll say it right now, don’t bother with the bow at the start.  Even though the bow I started with said it had a range of 500.  That must have meant 500 centimeters as by the time you get in range to shoot the enemy with an arrow, you’re better off pulling out the sword. 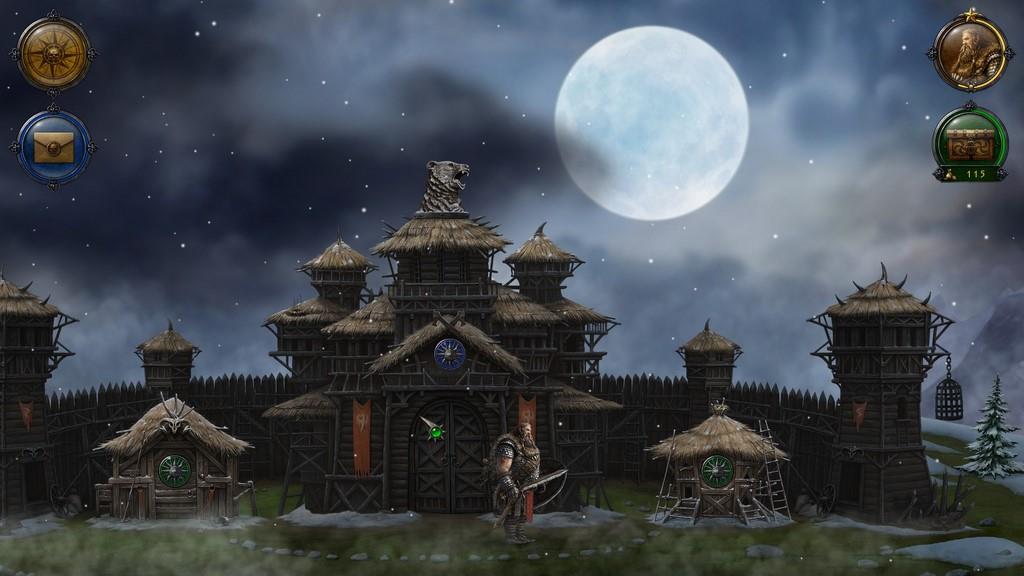 It gets even worse when multiple enemies are attacking you as they overlap each other on screen.  This is bad because you only attack the enemy that you have your mouse cursor hovered over, so when you have something like four skeletons stacked on top of each other it can be hard to actually kill one of them at a time.  You end up just randomly attacking a skeleton and before you know it, you’ve taken a ton of damage and killed nothing because you can’t focus on just one enemy.  What’s worse is that since it takes a long time to gather materials to even build your work stations, it’ll be a while before you can upgrade any of your weapons, though thankfully you can craft some armor to help a little.

Somewhere in each mine you’ll come across a powerful enemy (at least in the three or four mines I was able to explore), but sadly I was never able to defeat any of them, even the one in the mine under my castle which I would have figured would be a little on the easy side since it is the first “dungeon” of the game.  These are a lot more powerful than a standard enemy.  As you perform various tasks you will level up your abilities, though that takes a while.  Even after getting my Warrior level up a bit I still couldn’t hardly make a dent in the more powerful enemies before getting killed off, while normal enemies I can take out rather easily provided I only have one or two to deal with and they don’t stack up on me.

If I could sum up my thoughts about the game in a single word, it would be “slow”, or at least what I played of it.  From gathering a lot of materials to build your workstations to trying to kill whatever enemies stand in your way, to even when you’re on the verge of dying, it just feels slow.  When your health is around ten percent remaining, you begin to walk really slowly.  I get that in real life if you’re mortally wounded and on your last breath you won’t move as quickly as you did when you were at the peak of healthiness.  However, if you don’t have any food to eat and are nowhere near a place to cook any…let alone have the materials to do so…it’s a chore to watch your character slowly plod his way around. 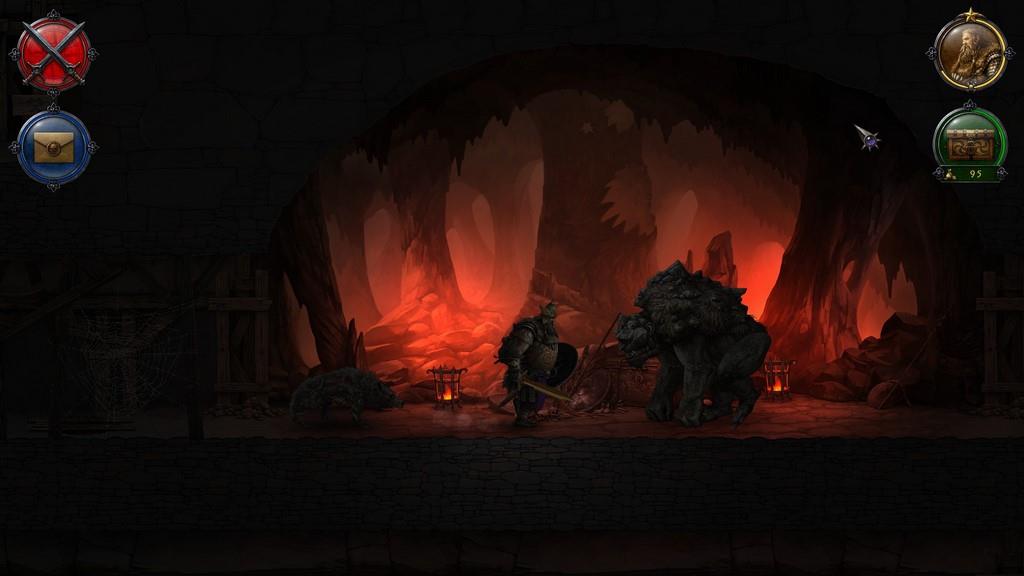 Granted as stated earlier you can spend a little gold to go back to your castle, which doesn’t refill your health, but I end up just eating a mushroom since all of the ones I found actually take away health and that way I can respawn with full health, but even that has a catch.  You’ll spawn back at your castle and if you died out in the open world you’ll have to walk all the way back to your body and hope that whatever killed you isn’t nearby to get a second helping of Viking kebab.  If you died in a dungeon though, you’ll still respawn outside of your castle but your body will be lying on the ground right outside so a few simple steps puts you back into the mortal world.

After playing Niffelheim for a while I can definitely say the game has potential, but the main thing that’s holding it back in my opinion is how slow it can feel.  Everything else is pretty good such as the music and art style.  By the time I started writing this article I hadn’t cleared any dungeon, and trying to walk past them on the surface usually met with a grim fate from something that overpowered me.  To me that means I have to grind on enemies and materials for a long time just to prepare myself to finish off the mine under my own castle and improve its standing, let alone whatever comes up next.  If the materialistic requirements were brought down a bit, the combat improved, and take away the slow moving when you’re on your death bed, Niffelheim can become a really enjoyable game.  As it stands now though, it just feels a bit slow and almost to the point of being boring.  The potential is there, it just needs some improvements.