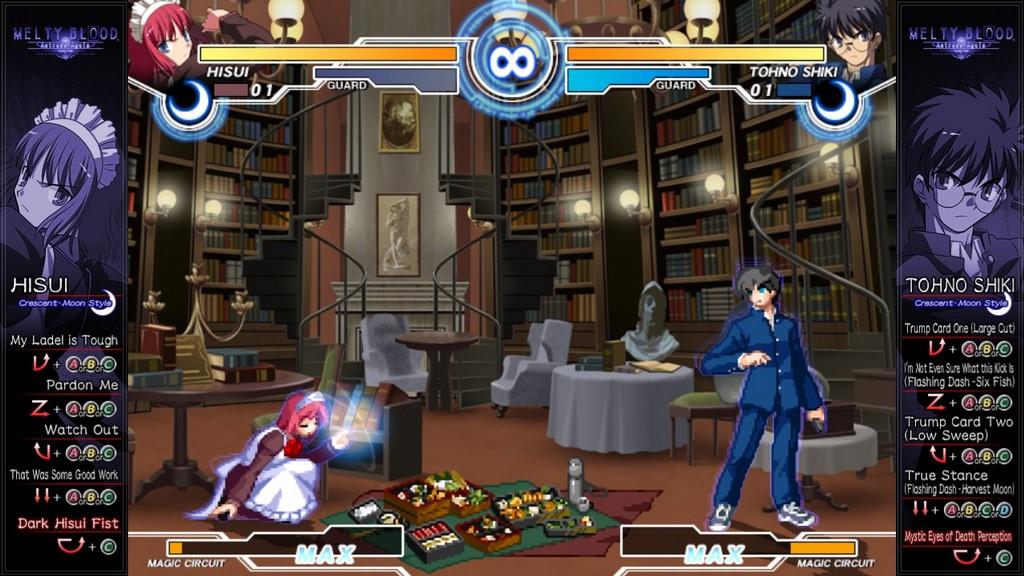 You could be forgiven for having never heard of the Melty Blood series until recently. The franchise has remained largely in Japan since its initial release in 2002, as a spin-off of the Type-Moon series, Lunar Legend Tsukihime. Originally a mini-game of sorts for the visual novel, the fighting game slowly gained an underground following amongst fighting game fans in the US, it would occasionally show up at fighting game tournaments, or on an arcade cabinet running a Sega NAOMI board, but gamers in the US have never had a chance to own this game without paying exorbitant import costs, until now, thanks to Arc System Works. The Steam release of Melty Blood Actress Again Current Code brings us the latest and greatest version of the long running fighting game, along with net-code for online play, in a very lean package.

To try and explain the story… is kind of a history lesson. The arcade mode features story segments for each character, but it doesn’t even begin to cover the hows and whys of this series, or even when it began. The story as it’s translated doesn’t help matters either, it’s a bit discombobulated, and features some quick cuts of translation, making all the characters seem aloof and flighty, like they’ve been doing this dance forever and they’ve forgot why they even started. Still, it’s a rare glimpse into this bizarre world of vampires, doomsday prophecies, and magi. There’s thirty-one characters to choose from in total, each with thirty-six color palettes available (not sold as DLC, shocking, I know). And while some are little more than variations of the same character, there’s still plenty of unique characters to choose from that will play to your own personal style.

The simplistic looking four button system belies a much deeper gameplay than this game initially lets on. Three attack buttons, light, medium, and strong, along with a special guard button make up the bulk of your controls. Moves are your typical quarter circle motions, but they change depending on one of the three styles you choose. Full Moon lets you charge up your Magic Circuit  (super moves) meter, and has shield counters, Half Moon gives you simpler controls, and automatically activates special modes for your character, Crescent Moon style is built around combos, and gives you longer shields. These modes also change the actual properties of special moves for each character, so each style will have an effect on how you play them. There’s also wave-dashing (done by a quick directional tap and the A+B button), double jumps, and plenty of other little details. Movement is key in this game, and there are plenty of tools to get around.

This game hasn’t changed much since it came out in terms of visuals. The animation has gotten better over the years, as this is one of the most fluid 2D games out there, with impressive spritework that the ECOLE, and French-Bread teams are known for. The backgrounds are a little static in some stages, but then there are some that are full of life and provide a trippy backdrop for battle, and there’s fifty-two to choose from, so, good luck finding one you enjoy. As a game that’s meant to be run on older hardware, there’s plenty of resolutions to run the game at, along with plenty of filters to try and clean up the game, but honestly, this game looks its best in all its blocky-pixely glory. Although there is some screen tearing when running this game at full screen on the highest resolution, which is disappointing. The music is also a stellar mix of sounds that has evolved over the years, but is easily on par with something like Michiru Yamane’s tracks from Skullgirls. You’ve also got fully-voice story segments, with some top notch talent, including Maaya Sakamoto as one of my favorite characters, Ryougi Shiki, reprising her role from Kara No Kyoukai. 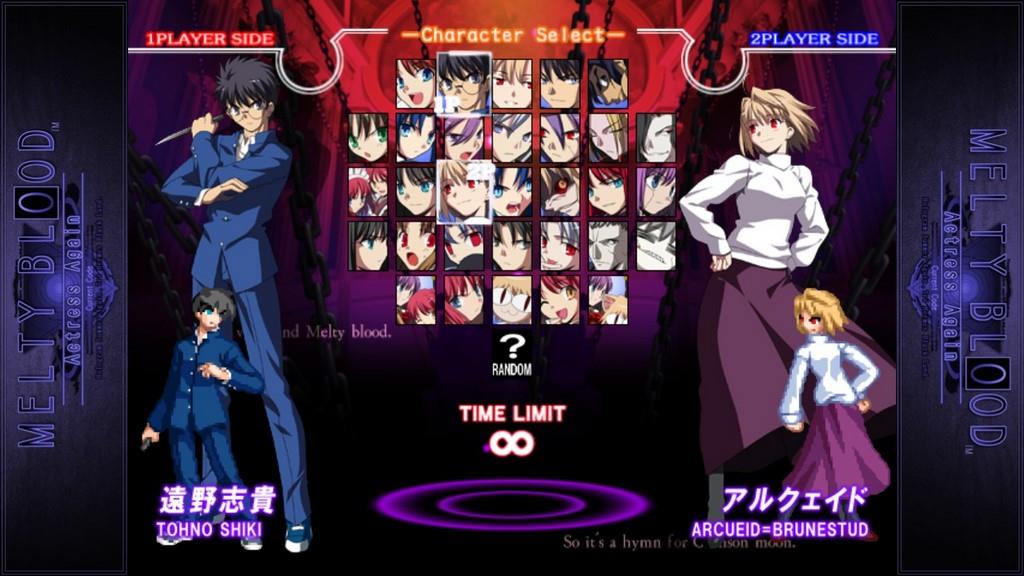 Online play is also present, making this the first game with networking available, there are ranked matches, player matches, and a ranking board. It’s kind of bare bones and the people who are playing online are merciless killers, simply put I don’t have the chops to compete. The game still rewards you for playing in ranked matches, so it seems like just participating and losing will still advance you. However the matchmaking itself makes little sense. I’ve got no ranking points, yet I’m being matched with players that have got points upon points, and the matches are quickly over before I have a chance to get my footing. It’s going to be a slog for newbie players to even bother with ranked matches, so stick with player matches if you want something a little less punishing. For when you feel the need to improve your skills with any particular character there is also a training mode, though it’s really bare bones, and this game doesn’t do very much to teach you about the underlying mechanics, like OTGs (off the ground), air combos, and the properties of reverse beats. So you’ll probably be consulting youtube or other guides to help you figure out the ins and out of your character.

So nearly fourteen years later, we finally have a legitimate means to get Melty Blood here in America. On one hand I’m really stoked that we finally have it, and it’s at a pretty damn fair price point, and comes with a ton of content. The other, less forgiving hand, is that the level of entry required to be competent at this game is actually rather steep, and the quality of players out there now are going to discourage some fledgling players. The networking match-making doesn’t make a whole lot of sense, and the training mode is rather light on teaching players how to enjoy this game. If you want to find a game that rewards patience and experimentation then look no further. If you need something that takes advantage of your bleeding edge graphics card, Street Fighter 5 is right over there, but you’re paying more for a lot less.

The release and quick subsequent patches show that ECOLE and French-Bread are intent on seeing Melty Blood Actress Again Current Code has a long lasting presence in the minds of American fighting game fans. To finally see this game available in the US feels like some sort of dream come true.