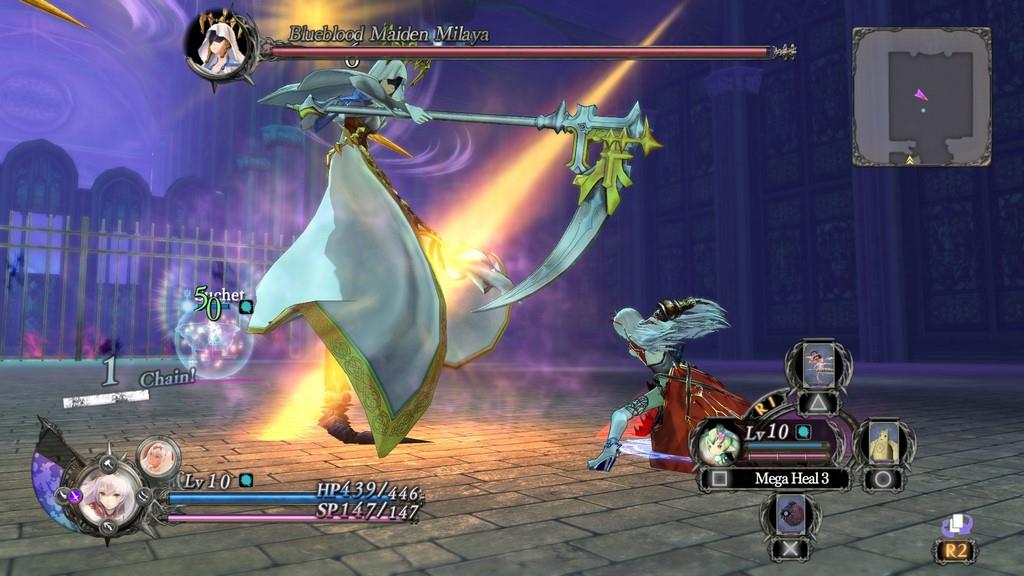 If you had bet me that Gust, developers of pretty much Atelier games, and only Atelier games, was going to try and make something outside of their wheelhouse, which has been the JRPG for many years now, I’d… have lost a fair amount of money to you. Nights of Azure, an ACTION RPG, from Gust, is a bit of a shake-up for the developer, and it kind of shows that their JRPG roots are present in everything they do, which unfortunately leads to some design decisions that don’t quite work for an action RPG, but would be right at home in your standard turn-based battle RPG. Nights of Azure as it stands is not a bad jumping off point for Gust, but let’s see if we can make sense of some of their ideas, shall we?

The world is covered in perpetual night, the Nightlord will once again ravage the world, that is unless a Knight of The Curia, Arnice, and her friend Lilysse are able to stop him. This demon hunting romp comes chock full of anime tropes, some light comedy, and a romance story that leaves or heroine choosing between saving the world, and saving her best friend, who most become a sacrifice to stop the Nightlord. Nothing in particular stands out in this story, and the tropes are all over this game, Lilysse is a klutz, which translates into pratfalls all over the place while she tends to her duties as a maid at the hotel where she and Arnice stay. Meanwhile Arnice is out galavanting around the city, hunting demons and absorbing their blood so she can become strong enough to defeat the Nightlord with her Servans, demons and creatures that she can summon to fight with her.

The Servan system is pretty skimpy in terms of depth, you’ve got your support classes, which will heal and provide you with shields when necessary, and then there are the attack classes which will be doing a fair bit of fighting for you. What’s kind of a bummer is how slow the growth is for Servans, meaning you’ll be hanging with your starting party for quite a while, because their abilities are just that good, and leveling them up is just that much of a hassle. Picking up new Servans will also cost you blood, which is the primary currency that you need to level up Arnice herself, and while she’s capable through the first few chapters, you’ll need to start leveling her up eventually, and it can get to be a bit expensive. Honestly, it was more form over function that got me to switch out to new Servans eventually, I was just getting sick of the little dragon with a sword asking where the next ‘turd’ was for him to cut down.

Leveling up Arnice also entails getting skill points that can be used to unlock new abilities. You can also do ‘daytime activities’ to earn some skill points on the side, which are earned after going out at night to do some demon hunting, so it’s worth investing some effort into digging through the menus to set that up. If there’s one thing that an action RPG relies on, it’s action, and unfortunately there is a lot of downtime and menu navigation to get things set up, and a lot of those things can only be done when you’re in the hotel, and not out demon hunting. Find a new item that might upgrade a Servan’s capabilities? Better head back. Thankfully it’s a quick matter of hitting the options button, but then that means all your progress is reset back the most recent checkpoint. The world consists of a few major map points, with shortcuts interspersed throughout, which thankfully cuts down on a lot of pointless meandering, especially since enemies that you would vastly overpower like to pop-up and just slow you down. 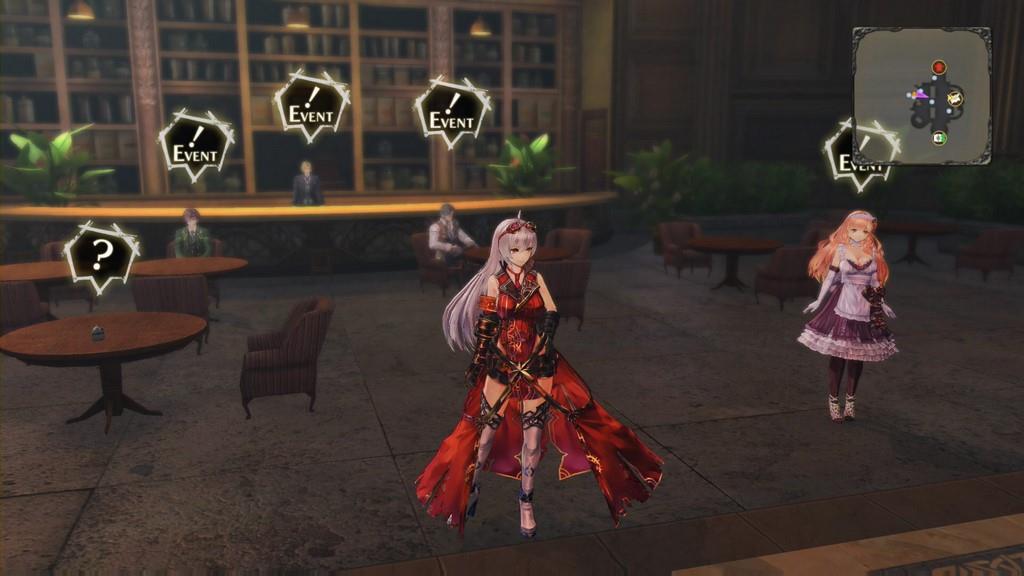 Combat is a pretty straightforward affair. Square is your normal attack, and Triangle is your strong attack, which is usually reserved for finishing off combos that are comprised of the repeated taps of the square button. Circle is your dodge and roll move, and the X button will unleash a special attack in exchange for your SP. Your Servans attack fairly autonomously, though you can give them slightly more direct commands, but for the most part, they are pretty good at dealing and avoiding damage. You also don’t really have to worry about restoring their health or special ability points, as there are plenty of drops from enemies and destructible items hidden throughout the maps that will restore your health, increase your attack power, or raise your defensive prowess, in addition to the myriad items and cash you’ll pick up along the way. You’ll also unlock a more powerful form for Arnice, and some additional weapons as you level her up, so keep that blood handy.

If there’s one thing Gust has always managed to be proficient at, it’s making characters that translate well from artwork to on-screen presence, and Nights of Azure continues that trend. The character models are fantastic, although a bit gratuitous in the skin displaying department. The sixty frames per second frame-rate starts to take a dip when enemies appear on screen, but when you’re just running around, this game is smooth. The areas themselves appear to be a bit too flat, and while they’re populated with stuff, they also feel a bit too clean and proper, meaning even the most colorful area, can feel a bit stale and boring. The music is pretty varied throughout the game, but initially there’s a bit too much of the same music going on, part of this is due to the music looping a little too frequently, which starts to grate after a while. But once you start unlocking new areas, new tracks are thankfully available. 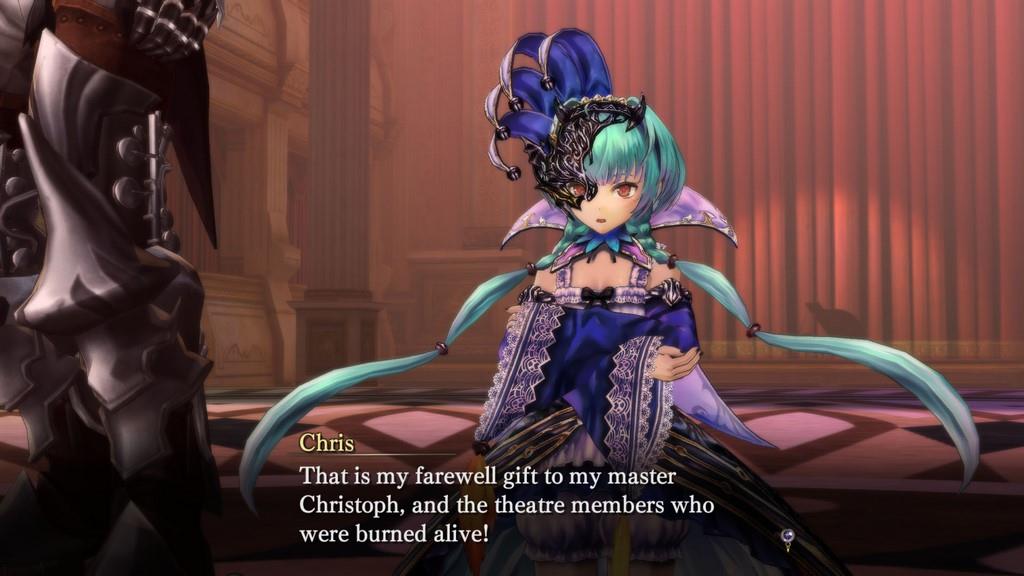 Ultimately what really keeps Nights of Azure from being great is the repetitive combat, and the amount of time you’re spending navigating menus and setting up your Servans, which ultimately doesn’t quite pay off for the amount of work you put into it. Just throw some items on each Servan and call it a day. There’s plenty of quests and side-tasks to complete that are worth doing that help break up the monotony of combat, especially the Arena, which tasks you with different objectives and rewards you more than handsomely for your efforts, so be sure to check that out. Nights of Azure is definitely a work in progress type of game, it’s got some good ideas, and the design is headed in the right direction, but a few glaring oversights keep it from being a hit. Gust has some promise if they ever decided to switch it up again and try this again, hopefully they’ll have more success next time. The combat could use some refinement, especially in the combo system, which grows stale rather quickly, and while you can switch weapons in the middle of combat, you can’t do it mid-combo, or even to extend combos.

Nights of Azure is something different for Gust, so I wasn’t expecting this game to be flawless, but it’s kind of surprising that they’ve ported some of their JRPG ideas over to an action RPG, but haven’t thought to refine them for the different gameplay styles. I actually would really hope that Gust tries again in the future with their current formula. They’ve got the basics down, the gameplay is pretty smooth when it’s working, it just needs to be tightened up, lower the time spent in menus, refine the tropes so that they aren’t so obvious, and they might have something that would definitely be worth playing. Nights of Azure is definitely rough around the edges, but I’d still say it’s worth giving a shot when you can pick it up on the cheap.

Gust has some pretty good ideas with the Servan system, and the gameplay is pretty smooth once you get yourself properly kitted out, but Nights of Azure has a few boring aspects that really make it a chore to play.