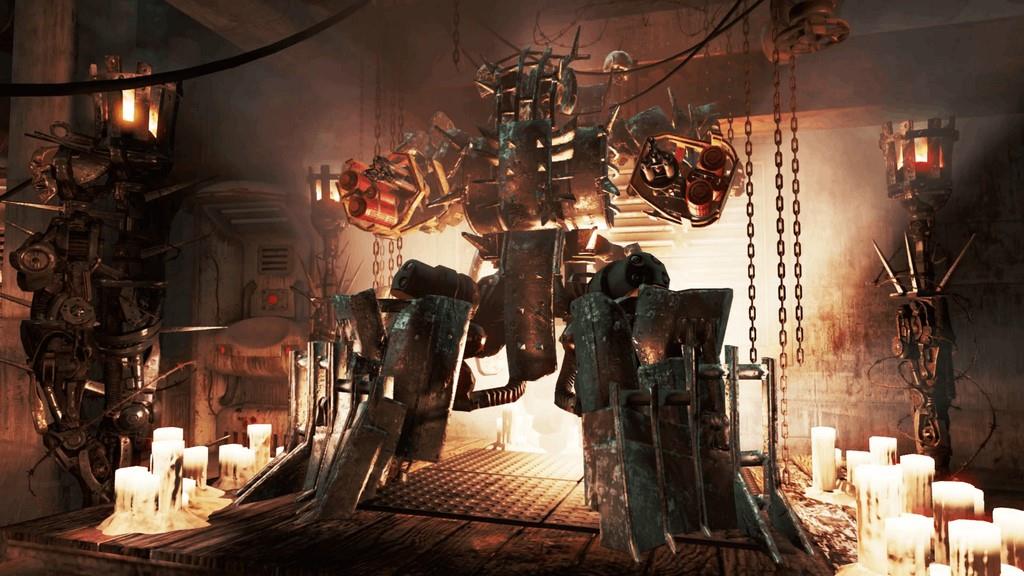 It’s possible that Fallout 4 has never been pulpier than it is in Automatron. The Fallout universe has always walked the line between its sci-fi-bonanza-magazine-cover lifestyle and its more sober, self-serious side. Automatron walks that line, too. It’s both goofy robots and gory dismemberment; it’s both blood-stained androids and childishly stitched-together robo-cosplay; it’s both brains floating in formaldehyde vats and the psychological breakdown of in-for-life prison inmates.

Automatron gets giddy, laughing at its own jokes—then gets darkly drunk, putting you through a meat grinder of misinformation and the best of intentions. All of this in the span of four or five hours. It’s the first of who-knows-how-many-pieces of downloadable content in the Fallout 4 Season Pass. It’s not the most heady stuff, but the loot drops certainly include some food for thought.

It starts off, as many Fallout 4 adventures do, with a distress signal. A caravan is under attack from robots. Not just some Mr. Gutsy that won’t abandon his post. Not just some leftover skin-job synth with a blank stare and an Institute rifle. These are organized robots on some kind of premeditated warpath.

I answer the distress call. I make a beeline for the marker on my map. I already know the caravan doesn’t stand a chance. These are some nasty robots; I’ve never seen these kind before. Laser beams everywhere. Robot pieces and parts flying. It’s bad news for a melee-heavy character like me, especially because these robots can go hand-to-hand with the best of them. I also find out that if they’re legendary enemies, they go up in a nuclear explosion. Again, that’s a bad situation for someone like me that has to get up close and personal to handle my wetwork.

But it’s nothing that a flaming Shishkebab and a couple syringes of PsychoJet can’t handle. I failed to finish off one last enemy eyebot, though. I run up to it, then it kites me along, flying a ways off, turning around to see if I’m following, then waits for me to catch up. Once I do catch up, it flies off again. I think this eyebot is leading me somewhere. So, like an idiot, I follow this eyebot around the map for a full 20 or 30 minutes before I realize this is going nowhere. I thought it would lead me to the Mechanist, the adversary in the Automatron DLC. But no. Not yet. So I take my extended ripper—my chainsaw turkey carver, I call it—and tear that eyebot a new one. 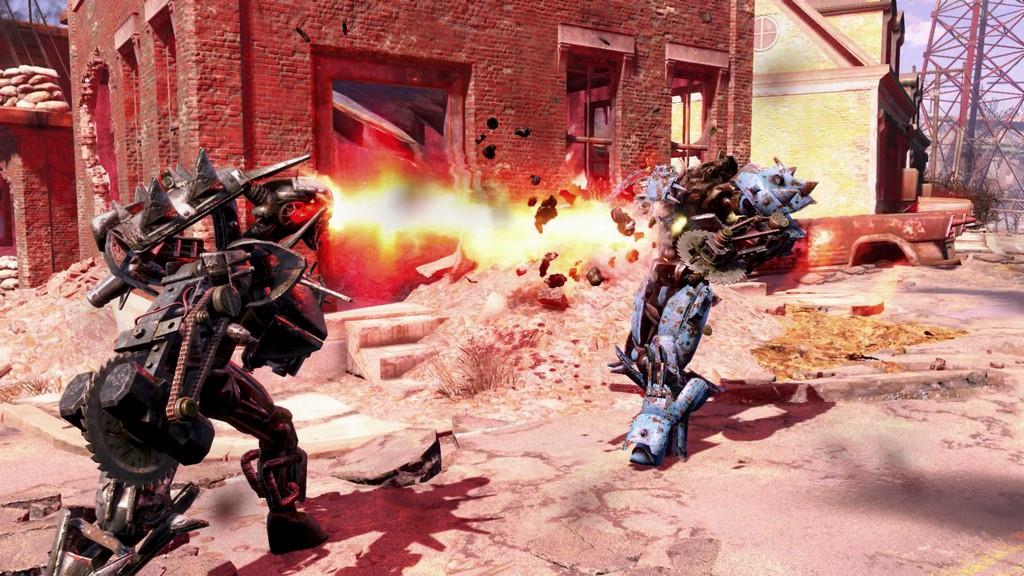 The next step is to find the surviving good-guy robot, the one accompanying the caravan that sent out the distress call in the first place. By this point, I’d left it a few miles back during my chase after the eyebot. So, things were going well already, I could tell. I often make fun of myself for taking too long to play video games. This wild goose chase just adds fodder to my self-deprecating sense of humor.

But Automatron progresses, and soon I’m swinging a Mr. Handy’s Circular Blade Weed Wacker, I think that’s the name, and I’m adding some kind of build-a-bot unit to one of my underutilized settlements. It can be entertaining looking at the junk that builds your automatron—your customizable robots. My first construct is made up of spatula rubber, telephone circuitry, TV dinner trays, and duct tape. I mean, the game doesn’t put up an applause sign, but that’s worth a chuckle or two, just knowing your creation is made up of so much recycled garbage. I slap on some ‘factory storage armor’ made up of straw pillows and cotton yarn. I smoosh together a military-grade circuit board, a dirty ashtray, and an alarm clock to make the hacking module (so my robot can deal with that nutty word-find hacking game instead of me). And just because it looks wrong without it, I throw on a Robotron head—made from an upcycled toy alien and a bonesaw. I love it. It looks like a legit robot when I’m done. It certainly looks like more than the sum of its parts.

I run out of adhesives and ceramics before I can put armor on the legs of “Automatron-282.” In other words, I needed to scrounge up more wonderglue and ashtrays in order to complete my robotic Frankenstein. 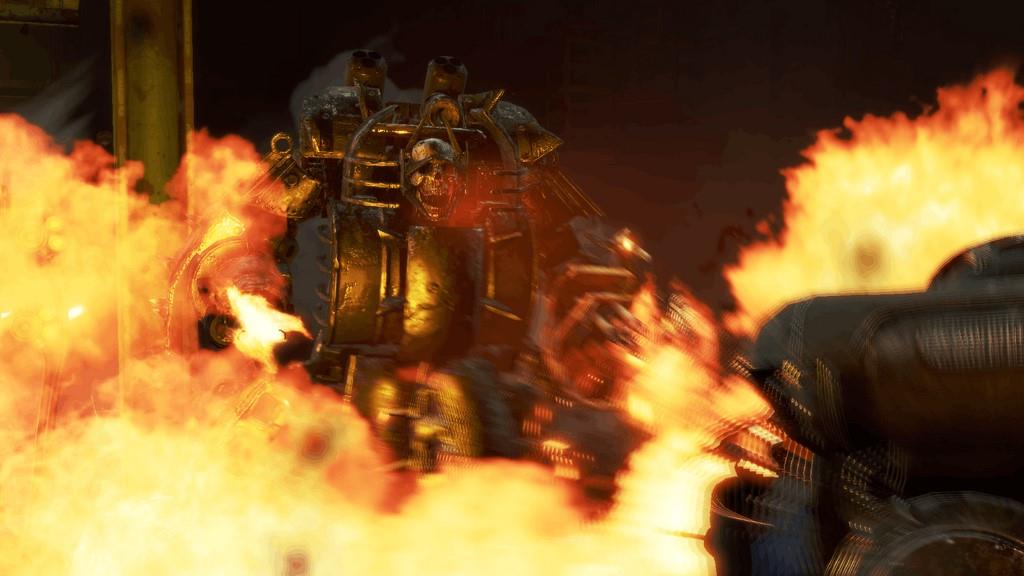 Of course, there are the endless distractions along the way; all the little things that, for me, turn four or five hours’ worth of DLC into twice that. I pick wild carrot flowers and mutfruit along my non-fast-traveling path. I check in on the Sunshine Tidings Co-op settlement, since I’m passing through the neighborhood. Turns out I should’ve switched off the recruiting tower. I have a dozen people huddling together like poorly dressed mannequins, wondering where the bedding material is. I watch yet another Brotherhood of Steel vertibird go down in a blaze of Synth laser beams. And the Mechanist’s roving robot armies skirmish with traders along the roads.

More new enemies, called Rust Devils, bridge the gap between human and robot—at least in appearance—by putting on robot-fashioned pieces of armor. Rust Devils are like some tribal society that wears the teeth and bones of its enemies into battle, except these folks bolt on circuit boards and hard wiring. Rust Devils do the dirty work of stripping robots of armor and useful innards, then make gruesome pylons of their remains, human skulls strapped over their skinned robot faces. Rust Devils hang up nets of scrap robot parts like super mutants hang up human body parts. The Mechanist’s robot army is straight up killing anyone and everyone across the Commonwealth, but the Rust Devils seem entirely too happy scalping their own humanity in order to fight this new enemy. I’m not sure what’s worse, really. 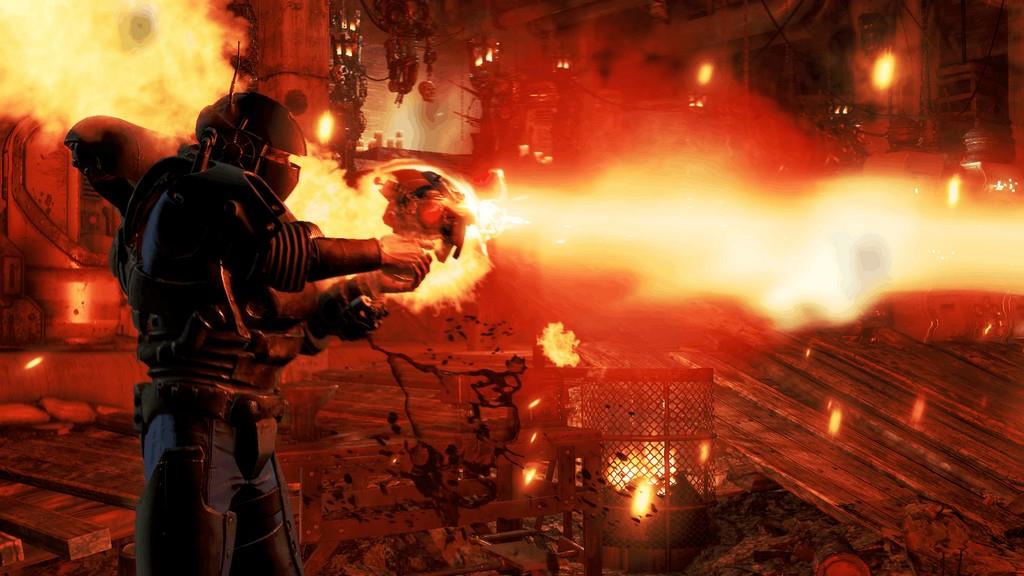 But Fallout is at its best when asking the tough questions about the relationship between humans and their robot creations. And Automatron examines that tug of war between man’s desire to create, and that creation being used for good or evil.

The Automatron DLC gives me a lot of gear to prepare for this final showdown with the Mechanist. And yet, I feel quite unprepared. I’m going in without robot armor (I’ve got my Vault 111 suit with some beefy leather mods), and I’m packing my “turkey carver” from before.

A few piqued events across the wasteland culminates in a showdown with the Mechanist, of course. The Mechanist’s lair is extensive. There are moments when I’m genuinely, jaw-droppingly stunned at how built up the operation is. I could’ve gone without the getting lost part, though. Ninety-five percent of the Mechanist’s Lair is sign posted well. But I still had a tendency to get turned completely around. Even after I’d completed the mission, I wandered around for 15 minutes, somehow missing the elevator taking me back up to daylight. 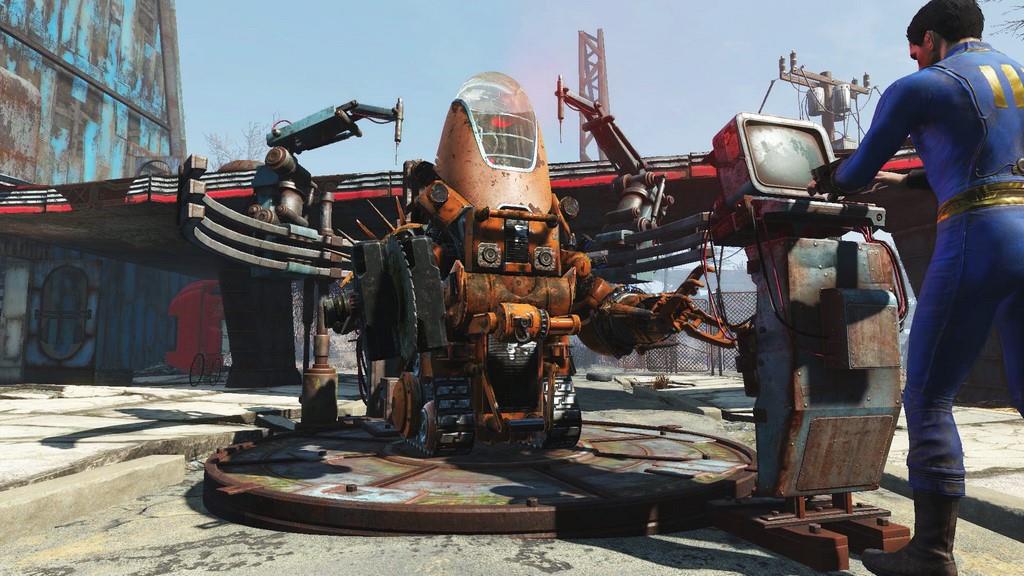 I’m going to be honest: I wasn’t sure I could stomach anymore Fallout 4. I’d done my time with the base campaign. I’d put in the work. Paid my dues. But Automatron pulled me right back into the game. I’m already looking around, licking my lips, ready for the next piece of DLC from the Season Pass.

Sure, while giving Automatron a fair shake, I still have to admit that things went limp in a few places. There’s the usual over-reliance on reading through bogged-down entries written in computer terminals. There’s a missed opportunity with a ticking time bomb of a brainbot that somehow comes under your care. The new weapons add some variety to the field, but aren’t win buttons by any means. There’s thankfully some choice in how to deal with the Mechanist, but there's a horde-mode slugfest in order to get to that point. And you’re given the ability to build an ingredients-gathering eyebot—which requires a decent amount of resources to build initially—but has yet to prove to me that it’ll give me any return on investment.

In the aftermath of Automatron, the Rust Devils continue to harass you, and the Mechanist still has rogue robots placed around the map with some Bethesda-bred algorithms. But I like what Automatron adds to my post-vanilla-campaign Fallout 4 world. Things had become just familiar enough around every corner to catch me nodding off. But now I’m bright eyed and optimistic for more of what’s out there in the Commonwealth.

Automatron pays off by taking advantage of Fallout 4's pulpy, ludicrous--yet still somehow slightly dry--sense of humor. Like any good sci-fi involving robots, it exposes people's humanity and inhumanity. And it adds new toys and settlement pieces to your toolbox. It's a well-rounded piece of DLC, and introduces you to the Mechanist, one of Fallout 4's more memorable villains.