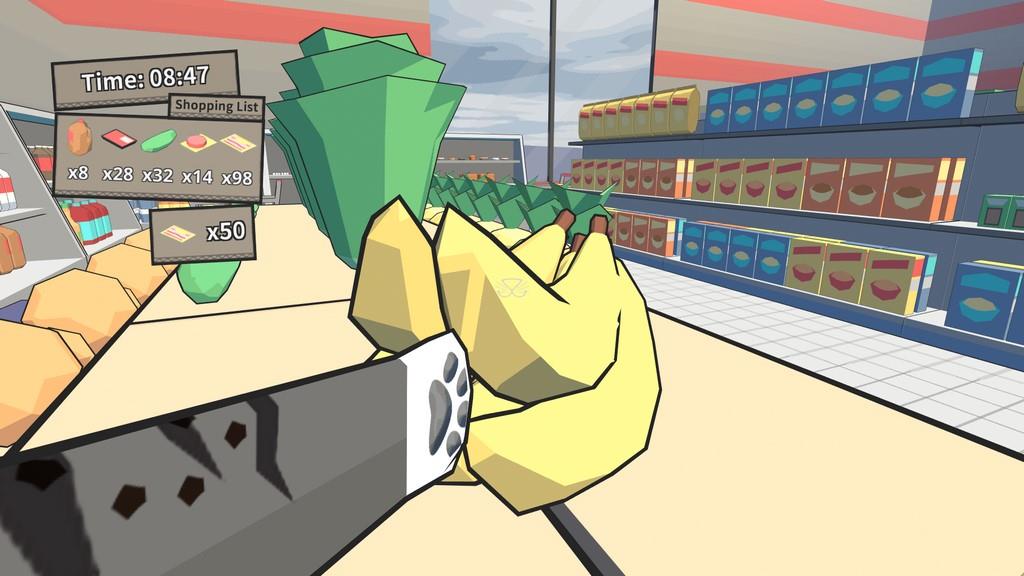 Catlateral Damage is the story of a cat. A cat whose only purpose is to wreck the place. It’s an endearing tale; a tale as old as time, really. I bet even the Ancient Egyptians were all like, “Look, kitty, we built you this nice temple and—oh great, now he’s destroying it.” Why do cats destroy things?

Because cats. That’s why. From experience, these are some other things I can tell you that cats do: meow when their food bowl is (anywhere near) half empty, turn your screen door into a Ginsu claw sharpener, run helter skelter from bedroom to living room at odd hours, and so on. I imagine my cats' excuses for doing cat things is simply, "Hey, I'm a cat."

I’ve personally never owned destructive cats, per se. I’ve been lucky. But I’ve heard stories. I’ve seen the evidence at friends’ houses. I’ve walked into their bathrooms with toilet paper unspooled and on the floor. I’ve seen the hairballs left in shoes and on pillows. I've seen the mangled bird carcasses left as doorstep offerings. That last one is sort of sweet, in a domestic-predator kind of way.

Catlateral Damage doesn’t go that deep into the feline psyche. You, the cat, are home, your masters are gone, and you’ve got one line of internal kitty dialogue to justify why you’re about to take everything on the shelves and swipe them onto the floor. The cat gets a thought bubble saying things like, “I’m hungry!” “My wet food is gross!” “My litterbox hasn’t been cleaned in hours!” And those are always followed up with an “It’s time to make a mess!” or “Those humans will pay!” And there you have it. That’s your motivation. Cat's gonna cat.

If you really stretch, there can be an odd, empty zen feeling to what you’re doing. Like you’re taking all these physical trappings, all these consumer objects we surround ourselves with, and intentionally devaluing them. You’re cleaning away the clutter. You’re putting blank space back into your decorative aesthetic. You’re wiping clean the horizontal surfaces of your life. You’ve heard the expression “A cluttered desk is a sign of a cluttered mind.” I’m not sure if throwing everything on the floor un-clutters minds, but Catlateral Damage is willing to give it a shot. 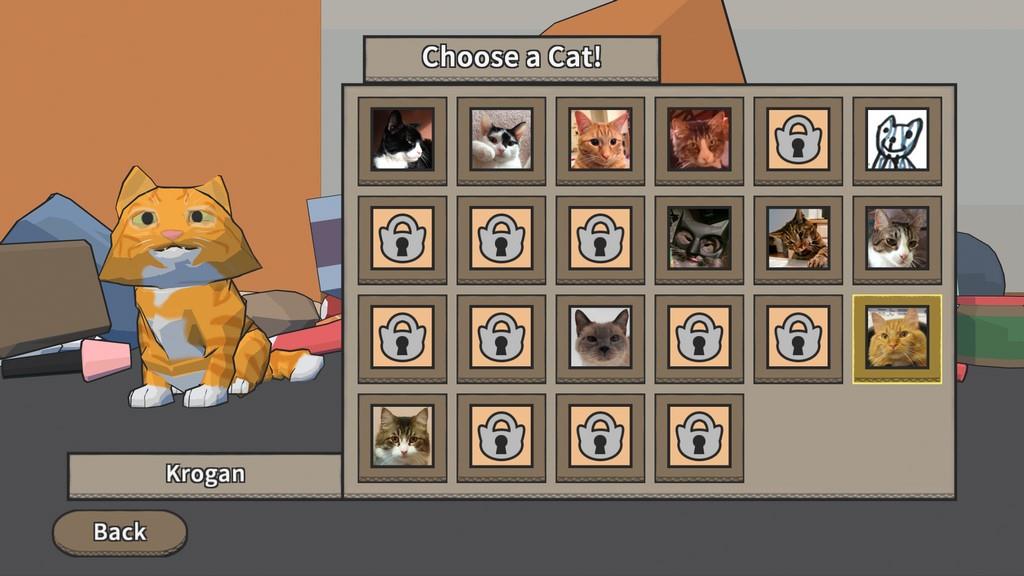 Nah, you’re just a cat wrecking shop. It’s a simple game. A timer ticks down and you’ve got X amount of time to knock Y amount of objects onto the floor. Flatly drawn, cel-shaded stages let you ruin a few different locations. There’s a log cabin. An older home. A modern home. Then you unlock locations with unique items to paw onto the floor. A “mew-seum” populated with valuable artifacts, model cities, and even a fully assembled T-Rex skeleton. A mad scientist’s lab with the floor already a smoking ruin, objects floating in sealed jars, and enough beakers and Bunsen burners to populate a junior high science fair. The only problem may be that things aren't destructive enough. Aside from dishes, hardly anything breaks. Everything just takes a tumble. Sure, it'd be hell to be an owner that comes back to such mayhem, but you're basically a heartless cat bulldozer.

Swipe left with your right paw. Swipe right with your left paw. Do some kind of stiff-armed kitty punch. Knock everything off the shelves, countertops, beds, refrigerators, cabinets, tables, sinks. Knock anything and everything off of anything and everything. I don’t mean to sound repetitive, but the gameplay itself only goes just so deep, too. Cute for an indie effort. I’ll give it that. Certainly worth a chuckle or two. But its schtick lasts only as long as it’s feeding you new locations or different objects to paw around. It's often tiring before the clock ticks down the four or five minutes you have to complete your objective. And the only objective is to knock stuff onto the ground.

A few fun things insert themselves into the action, too. Sometimes you’ll trigger a special event like moon gravity taking over, for instance. Suddenly you’re leaping higher and longer, and things soar down at a gentler angle toward the floor. Or there will be a power outage for no reason, and suddenly you’re doing things in very dim light. Cats have excellent night vision, but I don’t think that’s being taken into account here. The craziest one is when disco lights start popping off and the room is a spinning, swirling soup of circular dance hall lights. Can’t hardly land your jumps anymore. But these special events last only so long, then it’s back to vanilla-type destructo cat. 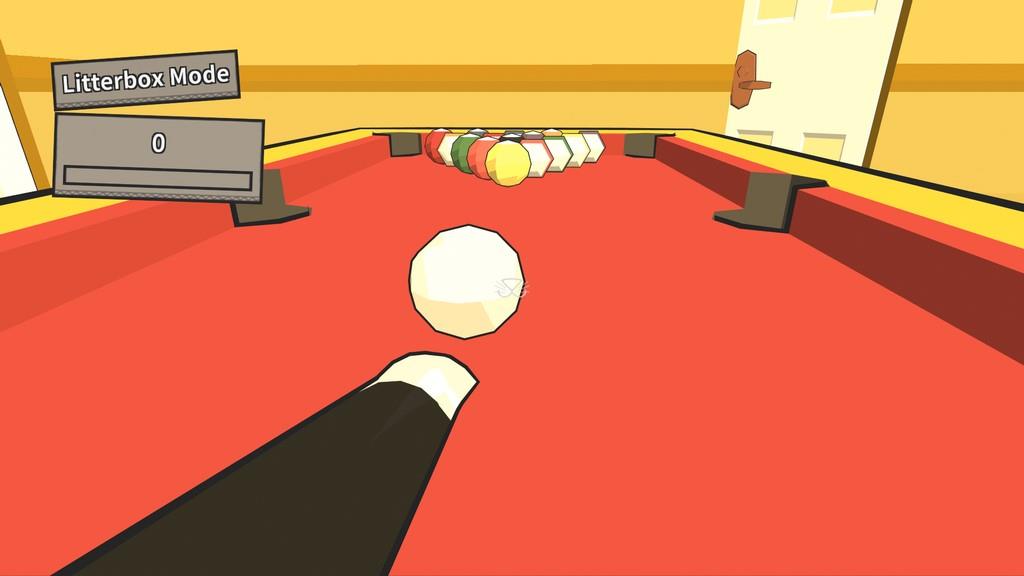 There are many cats to unlock. But this isn’t a Street Fighter roster of cats with different power moves. They all have names, but these cats all act the same. Their paws will just look a little different from your perspective, that’s all.

In Objective Mode, you’ve got the timer and the specified number of objects to topple before you can leap back into your cardboard box to advance to the next stage. Particular items, like potted plants and cat-scratching furniture, level up your skills. Skills like jumping, pawing, and speed. At first you feel like a kitty moving underwater. Get a few points into pawing, however, and you start feeling like a wrecking ball. A few points into jumping, and you’re reaching that upper shelf that was unreachable earlier. A few points into speed makes it less of a chore as you backtrack through each building’s floor plans. Again, it’s not a deep system, but deep enough for a small game with a singular objective.

Catlateral Damage has one fun idea. But that's about it. It's one idea stretched too thin. Knocking stuff off shelves sounds great on paper, and for a few minutes the concept is worth the laugh. But every cat's existence is the same as every other cat's. And every room you destroy pretty much feels like every other room. So, after a few minutes, you get the idea, and that's that. This cat stops landing on its feet.

Catlateral Damage isn't a cat simulator, really. It simply takes the shove-things-off-the-ledge aspect of a cat's personality and runs that concept into the ground. Different cats don't do anything different, and different rooms don't feel all that different either. Cute for a little while, and fun for a couple swings, but boredom set in before I'd even unlocked every cat or wrecked every room.