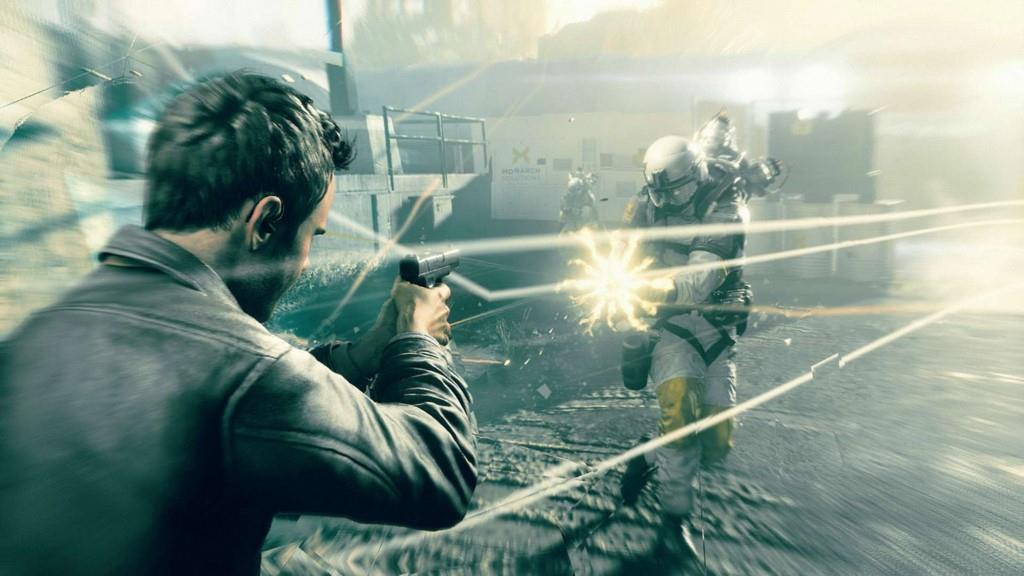 Written by Charles Husemann on 4/1/2016 for XBO
More On: Quantum Break
The moment I finished Quantum Break, I immediately wanted to start another playthrough. This is the first time that's ever happened in my career as a games writer. Why? The great gameplay is part of it, but it's mostly how good the writing is. After reaching one game ending I wanted to check out the decision paths that I didn't choose; I wanted to see the other branches of the game.
I went into Quantum Break blind. I saw the debut trailer at Microsoft's E3 2013 briefing, but largely ignored the game after that. I skipped all of the trailers, screenshots, interviews, and previews because it fell off my radar as I was drawn to other shiny things. As luck would have it, this approach suited me as I got to experience the game with fresh eyes and no expectations.
Jack Joyce has been invited to a peaceful college campus by Paul Serene. Paul is a friend of Jack's estranged brother, William, and is the founder of the nebulous Monarch Solutions. Jack’s invitation is to check out a project Paul has been working on. Jack and Paul go back a bit, too, so this isn't out of the ordinary. But things soon get interesting.
Paul has been working on a time machine and things go sideways the moment Jack and Paul turn the thing on. There was an issue in the construction of the machine and it on creates a fracture in time which, if not taken care of, will lead to the end of time. This is a very bad thing. Unfortunately, the warranty for the space-time continuum says, "If you break it, you fix it." So, it's now up to Jack and Paul to piece things back together.
The upside to triggering a rip in time is that Jack and Paul gain time-based powers. Paul can see into the future. And Jack gains a host of time-reversing and time-slowing powers. Through the approximately 10-hour campaign, you switch between both characters and use their separate powers.
Quantum Break is an interesting hybrid of video game and TV show. The game is broken into five acts and each act has three third person action/exploration gameplay "parts", followed by a "junction point" where you make a major decision. Junction points are then followed by a 20- to 30-minute TV episode revealing the impact of your decision made during the junction point. This sets up the next act of the game. This is a bit weird at first, but once you get past the first segment it all works together to form a cohesive narrative. The first segment is longer than the rest, which makes it difficult to acclimate to this unique format. But the lengthy first episode sets the table for the rest of the game. 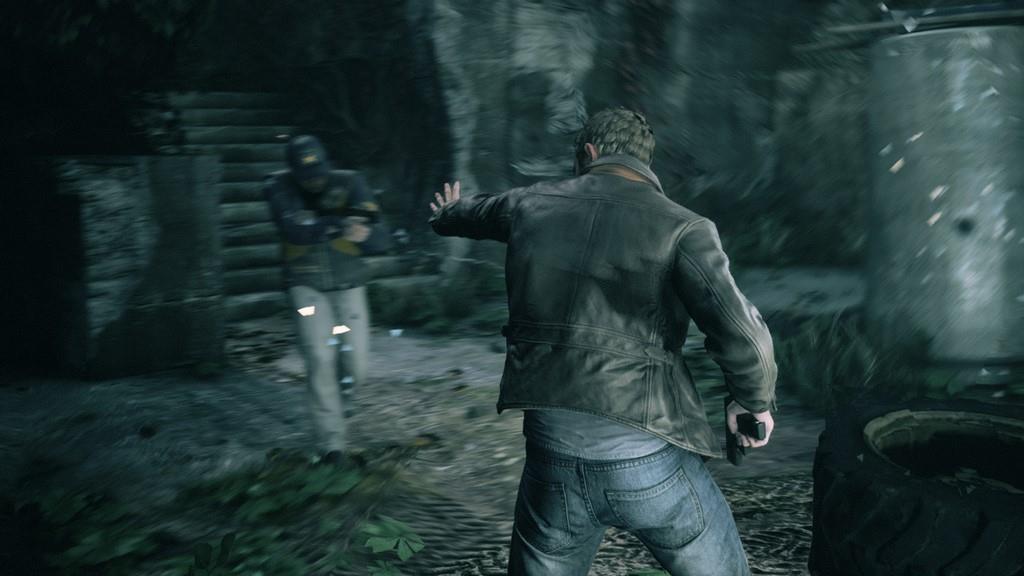 What makes it easier to take is the acting in these segments. While the cast isn't full of A-list talent, they are all strong actors delivering excellent performances. The cast is led by Shawn Ashmore (X-Men: Days of Future Past) who plays one of the dual main characters, Jack Joyce. His performance is solid as he brings a good sense of earnestness to his character. The powerhouse performances, however, come from the other main character, Aidan Gillen (Game of Thrones, The Wire), as Paul Serene; and Lance Reddick (Fringe, The Wire) as Martin Hatch. Lance Reddick steals every scene he is in and brings a menace to his role that I really enjoy. Dominic Monaghan (Lost, The Lord of the Rings) also delivers as William Joyce. The rest of the acting is solid—there isn't much of a drop off even after you get past the principle cast.  I was also impressed with Courtney Hope's Beth Wilder. I can't say much about her character, but her journey in the game is one of the best, and her grounded performance helps hold things together.
The production values of the TV show fall between a quality SyFy series and something on HBO. They aren't perfect but they don't distract much from the storytelling. There are a few glaring things if you go looking for them but they didn't bother me.
The cast was digitally scanned for the gameplay portion of Quantum Break. Switching between the digital video game characters and the real life footage is a bit jarring at first. But the quality of the scans is good enough that you aren’t struggling to figure out who’s who. 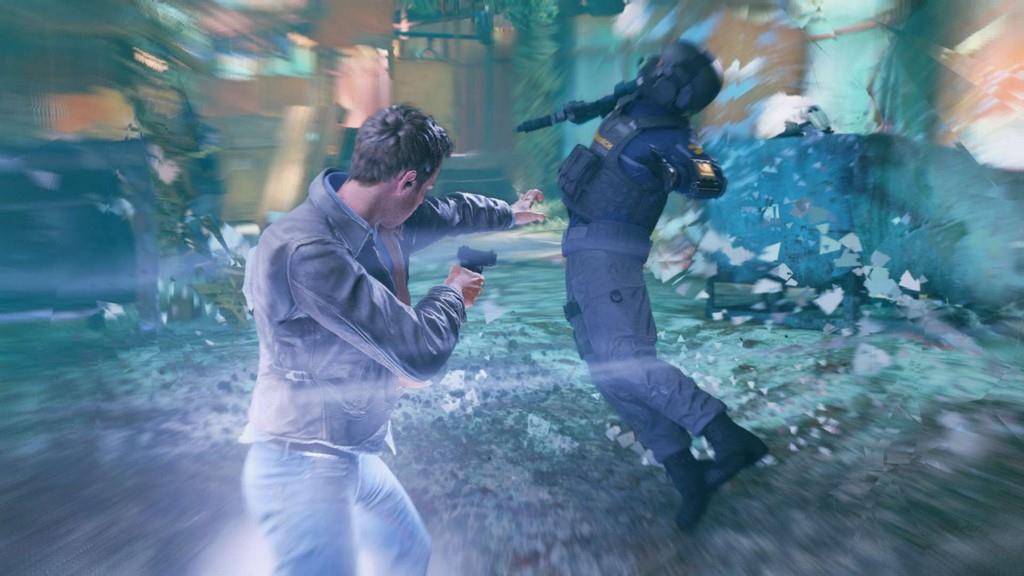 Having a great cast doesn't mean anything if they don't have a good script to work with. And it is here that developer Remedy delivers in spades. Remedy has a lineage of good writing (see Max Payne, Alan Wake) and Quantum Break might be their best yet. The plot isn't as black and white as it initially appears. You'll discover that everyone at Monarch Solutions has their own agenda. Having time travel as a central plot device is hard to do well without talking about time paradoxes and the butterfly effect, but Quantum Break delivers a fantastic story that makes sense. The game ventures into Dr. Who territory a few times but that's not a bad thing.
As good as the writing and acting are, Quantum Break is still a game and the game is rock solid. The actual gameplay is a mix of third-person shooting, exploration, and puzzle solving. The exploration and puzzle solving feels familiar to anyone who’s played Alan Wake. While sometimes tough, puzzle solutions always seem logical. The fracture in time creates stutters which freeze time for everyone who doesn't have time powers or a special suit. This leads to a few set pieces where Jack has to escape something that is in mid-destruction. 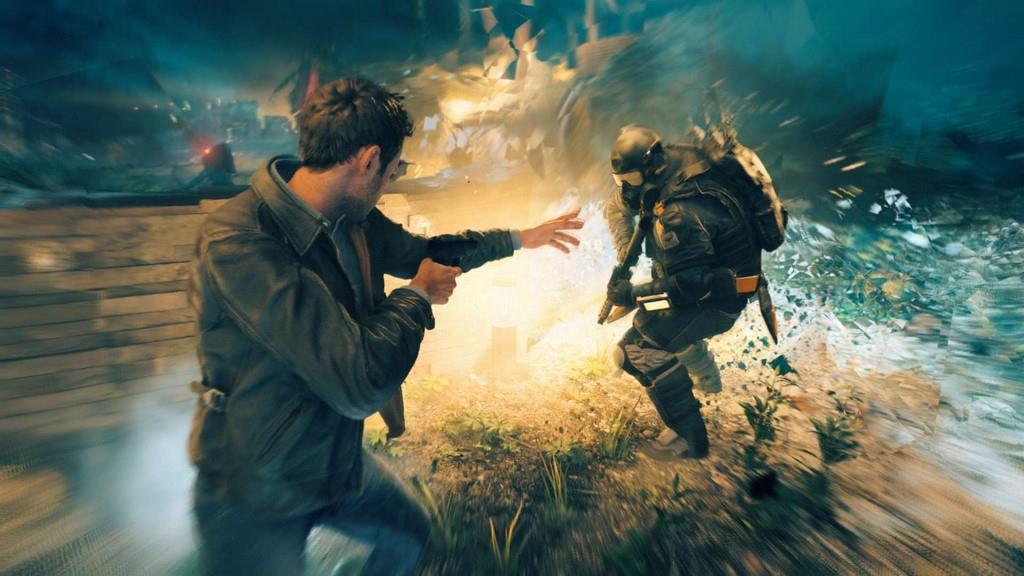 The TV Stuff is cool, but I'm happy to say that the shooting is just as good. The action is frantic and each gunplay sequence can be played multiple ways. Jack can carry one pistol, one sub-machine gun or assault rifle, and one heavy weapon at a time. There is some variety in the weapons and you'll eventually find guns to match your playstyle. The weapons are secondary, however, to the host of powers you control. There is also a cover system where you automatically snap to cover when you are close to something you can hide behind. You could play Quantum Break as a stop-and-pop game, but cover is only meant to be a quick respite while your powers recharge. You're meant to be out there, getting into the thick of it, using your powers.
Jack has five main powers. Time Vision spots enemies, weapons, and interactive objects. Shield temporarily shields him from incoming fire. Time Stop freezes an enemy in time. Time Blast does a concentrated burst of damage to one or more enemies. And Time Rush stops time but allows Jack to run around. My personal favorite is Time Rush: You can use it as an offensive weapon to run up on enemies and dispatch them quickly, or as a defensive measure to escape when you get in over your head.
The combat and everything else runs at a silky smooth 60 frames per second. Quantum Break sometimes scales the resolution down to 720p in places but I was too busy dodging and shooting to notice the loss in resolution. I know that those who get off on technical specifications will find a 720p first-party game in 2016 abhorrent. But if you're counting pixels in a game like this, that's on you. The game is constantly busy with various effects, including a world-trembling wobble every time you use your time vision. 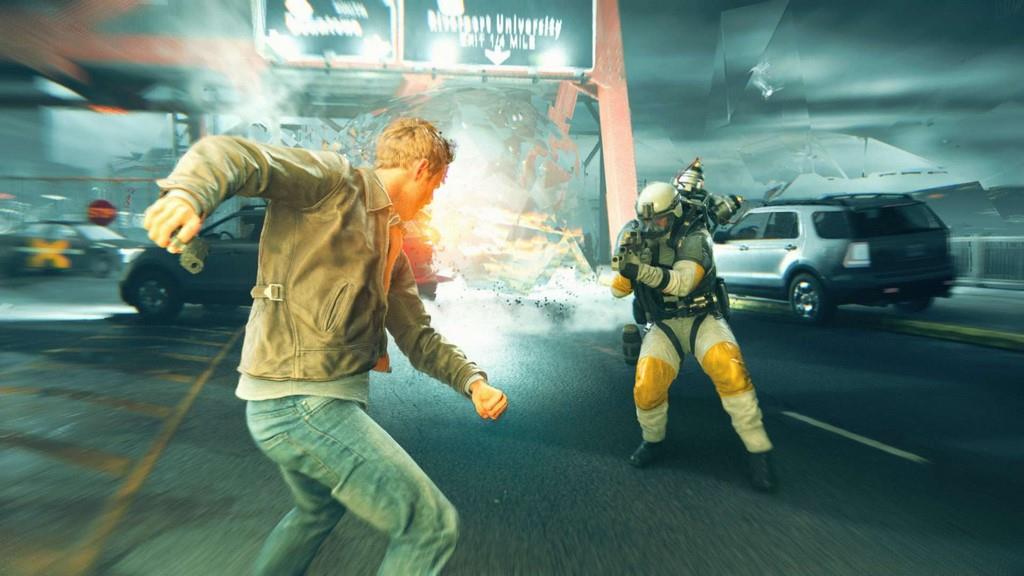 I'm impressed that at no point are all of your time powers removed. "We're taking your powers away at a key moment" is a thing that a lot of games tend to do. There are enemies that sap your powers if you get too close but if you are smart you can mitigate them using your powers.  Rather, the difficulty in Quantum Break comes from enemy variety and how they are deployed. The game makes you think about how you approach encounters but the challenge is never too much. The only gripe I have about the combat is that they are all-or-nothing affairs. If you happen to die in the middle of one, you start the sequence over again.
Quantum Break isn't without faults, though. A few more enemy types would've been appreciated. And there are only a few melee attack animations; they get old quickly. If you played Alan Wake then you won't be surprised to see blatant product placement. There are a lot of Microsoft product cameos in the game—and I'm pretty sure Remedy got some funding from Nissan to include the all new Rogue and Leaf in the game.
A lot of plot details are embedded in emails and videos. While Remedy nails the tone of corporate email, that does mean there is a lot of reading in order to get everything out of the game. You could skip them but these emails add a lot of character and flesh things out significantly.
The biggest problem with Quantum Break, though? It was over too fast. I'm not saying the game wasn't long enough. But rather that I wanted to keep exploring this great new world. The ending makes sense and it is certainly long enough, but I just wanted to keep playing. I'm hoping the game does well enough to merit a sequel.