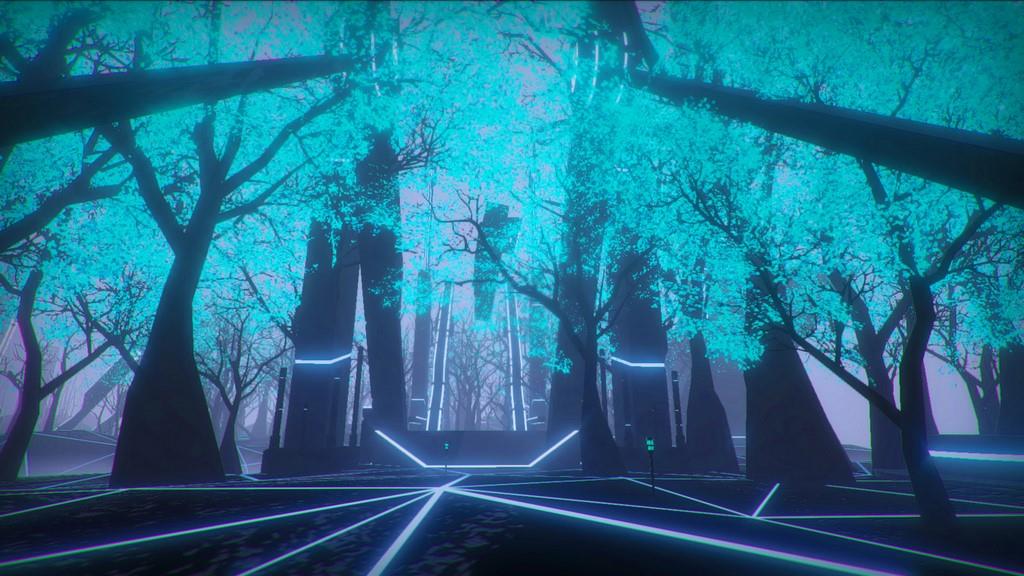 There are strong first impressions that immediately seem to define Soul Axiom. There is a feeling of isolation and minimalism that is impressed both in the visual style and through the interactions available with the world around you (there is actually relatively little to really interact with). The world grows around you, but those early impressions seem to linger, and are more often reinforced than countered, probably to the detriment of the overall experience.

Some other things also jump right out when you first pick up the controller, chiefly being: holy moly this look sensitivity is dialed up to 11! It's an easy fix in the controller options screen and a slider brings it back to something less jumpy (the screen claims the slider was at 1.0 and dialing back to about a 0.7 was a good starting point). But in an adventure that solely rests on a point and click mechanic whoever thought it was a good ides to dial up the default sensitivity to a level that would make an experienced MLG twitch shooter blush dropped the ball.

The very second point that jumped right out was my first encounter with an invisible wall. I wasn't two minutes into the prologue before I found a space that for no other reason than spite I was not allowed to access. There would be numerous future locations where I would run into similar invisible barriers or other small obstacles solely placed to create an artificial barrier to fence in the bounds of the game world. There is a throwaway jump mechanic in the game that pretty much never serves any real purpose and is never robust enough to hurdle the smallest of obstructions.

At the conclusion of the prologue I also ran into my first bug, as upon waking in the wreckage of my airship I fell right through the game world without even a single controller flicker of user input. But after a quick restart I was dropped in exactly where I left off, didn't fall through the floor this time, and for the most part was on my way through the Soul Axiom experience. And in many ways I feel that this game is just that, more of an experience than a game. From the jump you are immersed in this realm called Elysium. Elysium is a digital word created to house the souls of people in an attempt to replay their fondest memories in perpetuity, an electronic afterlife. There is an unmistakable Tron feel to this way-station of Elysium, a world of dark shapes edged by the outlines of bright and colorful lights. This feel is broken only when teleporting into specific memories. Those memories then take the shape of the location where they are set, but even that is more abstract than realist. There is a bit of a Borderlands feel to much of the art direction, but again in the most minimalist of design. Colors will define the objects not textures. A rock is a rock by it's shape and hue, not by the grain of the stone or weathering on its face, those textures have been largely omitted. 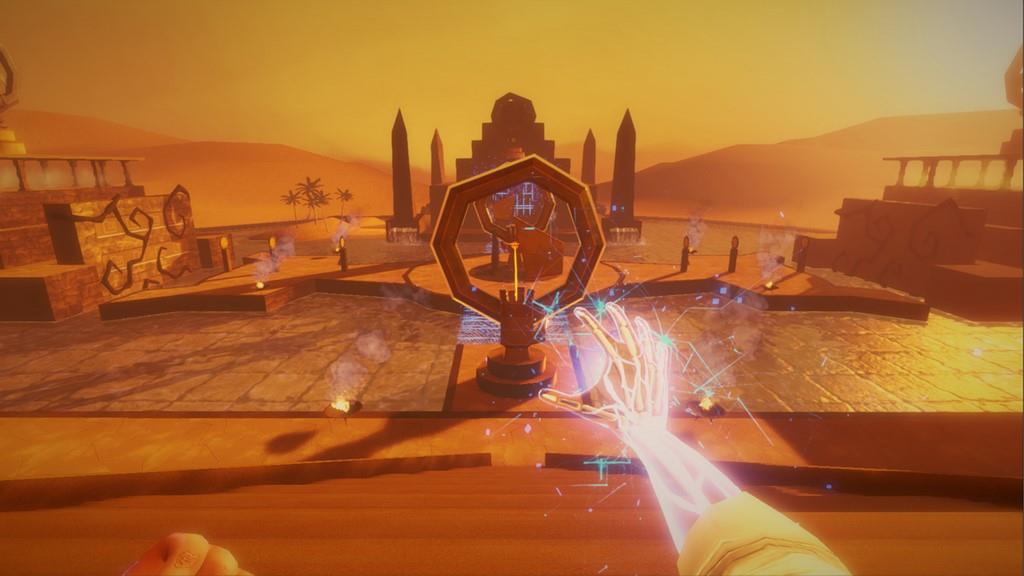 The world bounces then between fully and semi-abstract. I suppose the whole point to keep with this afterlife aethstetic, but where it falls flat is that it never really engages me in the story or the quest of the protagonist. It's a bit dreamy but it's also a bit un-involving. It's hard to fully invest emotionally in a game where every polygon is screaming at you to break the fourth wall by its inherent abstraction. And in the end all this game has going for it are three things: visual style, a narrative, and puzzles.

This is a first person puzzler through and through. Explore each location, solve the puzzles in each room, move on to the next. You are gifted with various powers that allow you manipulate the world around you but only in so far as it relates to solving more puzzles. You can make walls and objects appear and disappear with one set of powers, but not any objects, only those carefully placed and shrouded in blue light. Of course those are the ones that directly relate to some piece of one puzzle or another. Then you get get the power to move objects and pause them in place, but again, only those shrouded in green that relate to some other puzzle. The end result is a fairly straightforward puzzling experience. The objects highlighted in the colors associated to those various powers in an otherwise drab world take much of the ambiguity out of how to approach each puzzle, and the solutions themselves are mostly pretty straighford and simple. On the one hand, the game does a fantastic job of showing how a puzzler can deliver a variety of challenges and not bog down the player in endless dialog explaining the bounds of the each device. The text and instruction to each challenge is minimal to non-existent but the object highlighting makes the mechanics obvious enough to lead the player to the path of the solution. However, on the other hand, the puzzles themselves end up being mostly so unchallenging that the game boils down to less of a puzzler and more of a point and click adventure. And that lack of dialog, it threatens to further distance the player emotionally to everything else that's going on. 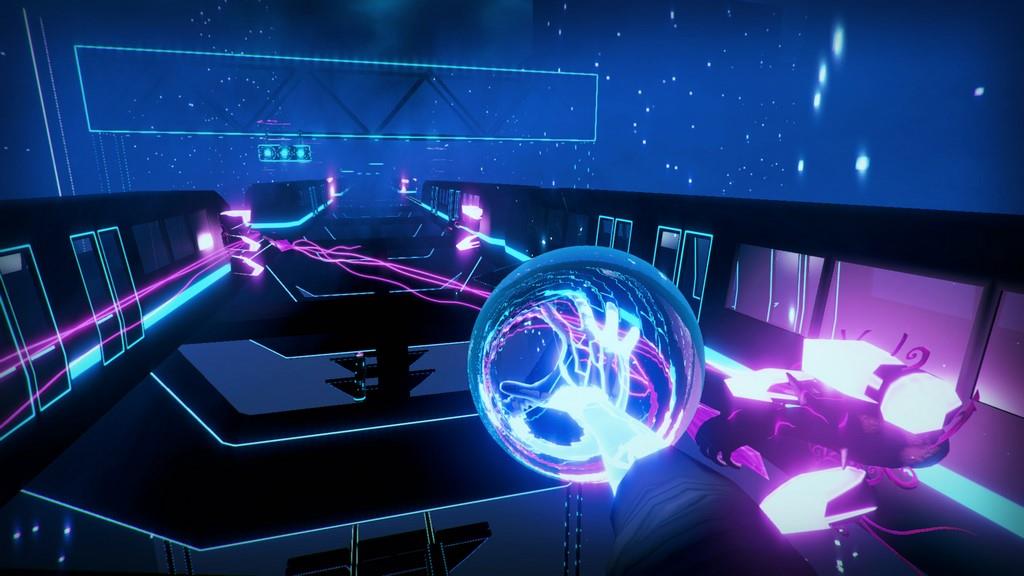 So we've got a minimalist world with a nice variety of puzzles but little challenge in them. All that we're really left with to drive the experience then is the narrative. There's a protagonist, an antagonist working always just beyond some pane of glass or on the other side of some grate on an air vent, and a lot of peripherally happenings and extras that all seem to channel a plot line from a Bioshock game, but I'm just not invested in any of it. I wasn't hooked by the initial impressions, nothing has been investing any lure to take the bait, and stacked against those factors I find my emotions divorced form this world. The narrative on its own just doesn't pack enough punch to reel me back in to characters that are mostly unexplained and undeveloped, and intentionally left "incomplete." There's a bit of a trick going on that in each stage we only get to see the first bit of the tale and have to later revisit every level to get the full story. But I wasn't that bothered the first time around and end up being forced to revisit scenes I'd really rather just move on from. It's like an Assassins Creed game where you remove all the good parts where you run, jump, fight and assassinate, and just get to watch incomplete memory cut scenes from the Animus without even getting to meet your main character or the rest of the team running the operation.

So what are we left with? Soul Axiom is a story driven narrative first person puzzler that doesn't flesh out its world or characters, doesn't really provide a challenge with its puzzles, and doesn't have the punch in the plot to make up for those deficiencies. And while that seems pretty damning, it's not an unenjoyable experience by any means. It's interesting enough to stroll through Elysium, each level does open up a completely different flavor of the dream world and this variety in level design is only exceeded by the variety in puzzle design that dot each of the levels. I wasn't challenged particularly or engaged but I also wasn't bored. I guess there is a sort of catharsis in pointing and clicking my way through Elysium. You're going to be fine, you're not going to get frustrated and throw any controllers at any of the challenges. You will get to experience the story and there is just enough to see and do along the way to keep you going. But once you've reached the end, there is also no reason to return. Despite being able to tackle many of the levels in any order, the game really is quite linear and once you've bested each of those puzzles that lacked challenge in the first place there isn't a compelling reason to try and tackle them again. There might be a few loose collectibles to try and hunt down, but why?

There's a lot going on around a game that doesn't really have a lot going on in it. At its core Soul Axiom is a first person puzzler with a minimalist look and feel and mostly underwhelming puzzles. While the game won't really draw you into its narrative or challenge your abilities, it does provide a pleasant stroll through an imaginary world. You don't have to play this game, but if you want to sit back and have someone walk you through a tale while having to pencil in a few puzzles along the way, then Wales Interactive have a story at the ready. It won't blow you away, but you should be entertained enough to appreciate the effort.