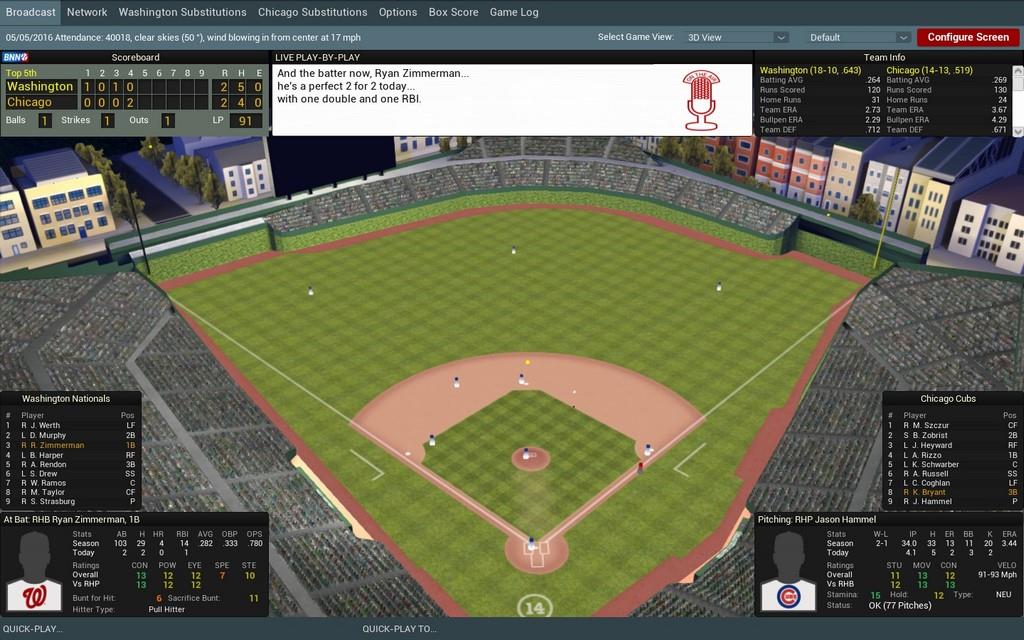 Out of the Park Baseball 17

You may not know it by the weather depending on where you live, such as in Ohio where it can’t make up its mind which season it is, but it’s once again that time of year where we dust off our gloves and take to the field…well, if you’re an athlete that is.  Me, I’m probably better suited to sit behind a desk and try to manage a team to victory, try being the key word.  For the past several years I’ve reviewed the Out of the Park baseball simulation series of games and each year the series has gotten better and better.  It’s once again time to pretend I know how to manage a baseball team as I take a look at Out of the Park Baseball ‘17.

When you first start up the game you have several options to choose from including to start a New Standard Game where you play with real 2016 MLB and/or international rosters, a New Historical Game in which you can play any historical season from 1871 to 2015, a New Custom Game where you creat your own baseball world, a Historical Exhibition where you can play a game or a series of games between two historical teams, import your Out of the Park 16 game, or just play a pre-configured game.  Choosing to start a New Standard Game begins with you choosing from several leagues to include including the MLB, US Independent Leagues, Japanese Baseball League, and several others.

Once you have that done you’ll go through setting up your manager profile which includes choosing your team, your role (Manager, GM, or both), playing in Commissioner Mode (you control the entire league), and the option to never be fired.  Once the game begins you’re taken to the Manager’s Office screen which looks similar to that in previous games.  It lets you see any notes and tasks that are upcoming, info for your next game, upcoming events, team finances, and even the team owner’s expectations for the season.  Once you go through your settings to make sure they’re to your liking, it’s time to head out to the ball park.  Prior to the game beginning you’ll make sure your roster is set to your liking.  The game will have the opening day rosters for the 2016 season so if there’s a player you really liked from Spring Training that’s not on the current lineup, feel free to throw him in.

As a game begins you get a nice view of the ballpark and are presented with several options you can fiddle with such as field view and the option to simulate any number of innings, including the full game.  If you choose to go through the game yourself you can take things either pitch by pitch, or simulate the last pitch of the at bat.  When on defense you can choose where to pitch the ball such as straight ahead, go around the pitcher, or even intentionally hit the batter.  Hopefully you’re not playing in New York or Boston in that scenario.  As for batting you can choose to swing away, take the pitch (ie. don’t swing), steal a base, bunt, and a few other options depending on how you want your batter and runners to react to the pitch. 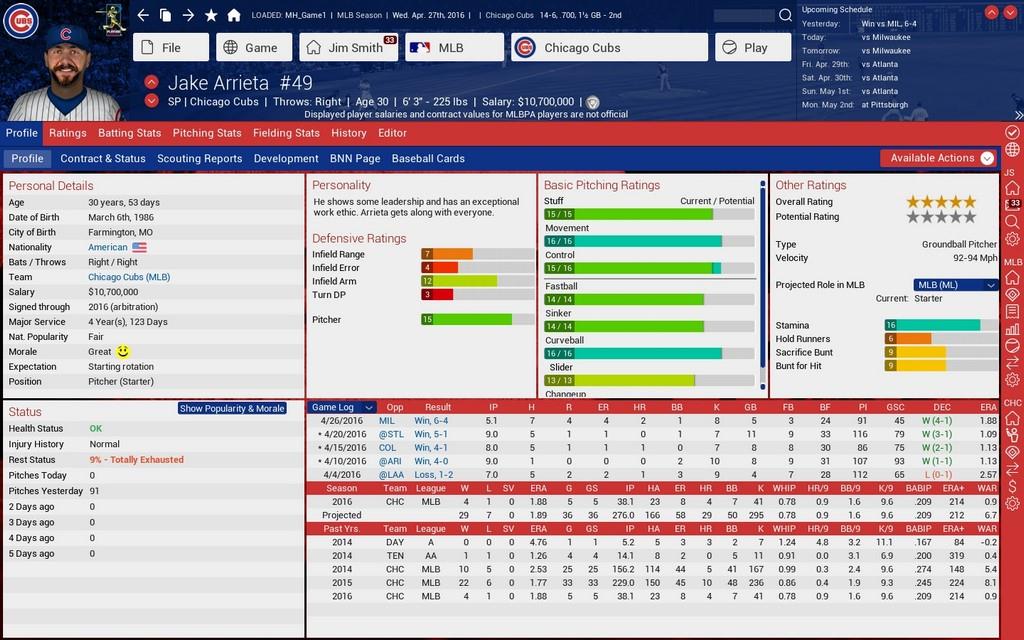 While the game progresses you’ll notice a new addition from last year; player icons that show the action on the field.  Granted they don’t look like real people and more resemble chess pawns which is fine with me.  This is a baseball management simulation so I’m not expecting state of the art player models on the field and this works out pretty well.  Whenever you choose an action whether pitching or batting, the “players” will act out the scenario whether it’s fielding the ball or just watching a strike go by.  The only real downside to this is that if the ball is hit, the play-by-play text  doesn’t come up until the play is underway.  I understand that it lets you see the play, then see the play-by-play text of the play.  A more real-time option would be nice, but then again that’s an incredibly minor nitpick.

If it turns out you don’t have a lot of time and are already in the middle of a game, you have a few options you can choose from beyond turning play-by-play on and off.  You can simulate to just about any point in the game be it the current at bat, half or whole inning, up to a certain inning, or even the whole game or until runners are in scoring position.  Outside of simulating the current at bat, you won’t see any action on the field and it’ll just jump to where you decided to simulate up to.  If you need to leave the game but don’t want to just simulate it, you can save and exit the game and come back to it later.  When you continue your game with an actual on-field game in progress, it’s a little difficult to figure out how to resume it because you actually just go to the manager’s home screen and have to choose in the Play menu to continue simulating the game, but it’s not overly difficult. 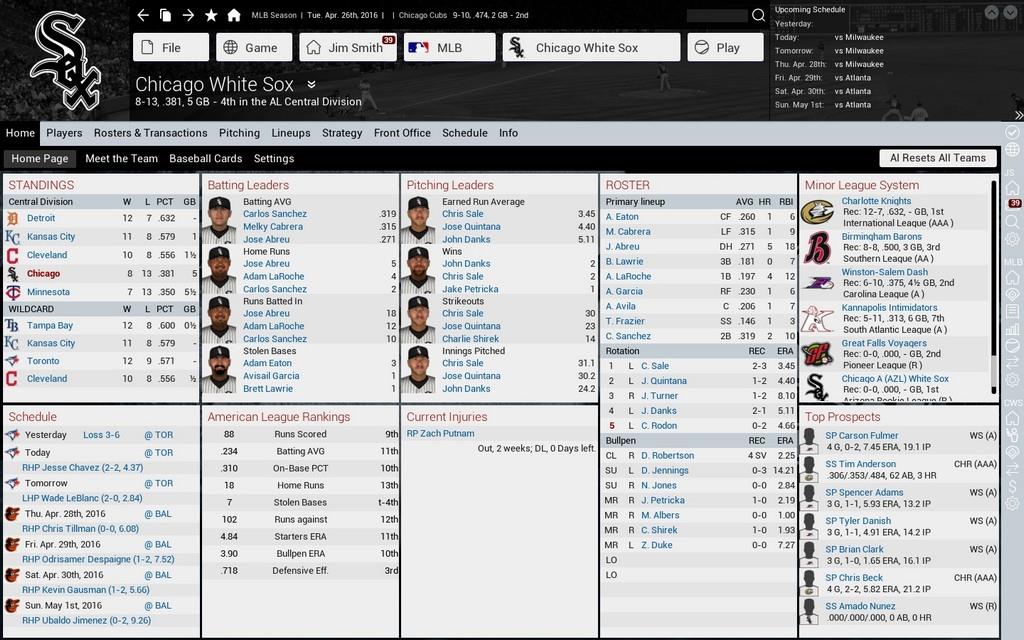 Once the game is over you’ll be taken to the game’s recap screen where you can see a recap of the game as well as the stats of the teams and players.  If you’re not fond of the auto-generated recap you can even edit that to however you wish.  Leaving the recap screen will take you back to the manager home screen where you can prepare for your next game.  You can also check out what’s going on in other games and even leagues, plus you can check out a “webcast” of any games still on-going.  You can also watch some games still in progress, but my complaint here is that you still have to click on the play-by-play text to continue after each play, plus you have to hit a blue “Continue” button to execute each play.  I’m not exactly sure why that is and you can’t just have the play-by-play text disappear after a few seconds and proceed to the next play as it doesn’t really let you just kick back and enjoy the game, but again it’s a minor nitpick.  That idea would have also been nice when you want to simulate your own games.

The other game modes operate relatively the same once you get into them.  Choosing to start a New Historical Game will let you choose an era in baseball’s history such as the Early Years and Baseball Boom eras, then choose your season to play.  After choosing a couple more options and checking out an official season recap, you can then choose to use the real lineups and transactions from that season (or if not, choose which minor leagues to add), go through a few more options, and the game begins.  From there it’s the same thing as a standard season.  A Historical Exhibition season or series lets you choose any two teams from baseball’s history and set your own series settings such as how many games and the format of those games (two home, two away, one home, and so on).  You can also create your own baseball world and set up a league however you want it.

That’s about all there is to it.  As with past years I have very little complaints with Out of the Park 17 and those that I do have are minor nitpicks.  In terms of changes from previous years the biggest are the player markers seen when playing the game that act out each play.  While the main aspect of the game is managing your team, it’s nice to see a visual representation of what’s going on during the game.  The ability to have the game auto-generate game recaps and summaries plus letting you edit them is a nice way to personalize your experience.  It’s also a nice addition to let you take any two teams in history and see how they would face off against each other as opposed to just doing a season for a particular year.  Several other visual aspects have also been improved for a better overall experience.  Once again it’s not too hard to see why the Out of the Park series is the go-to series for baseball management simulation.

Out of the Park 17 continues to add improvements to each new version and while some of the changes this year may seem small, they’re still quite noticeable, especially the player markers showing the action during a game and the ability to have any two teams in history square off against one another.  As it’s done in the past, Out of the Park 17 shows why it’s the go-to simulation series for someone wanting to manage a baseball team, historical or present day.