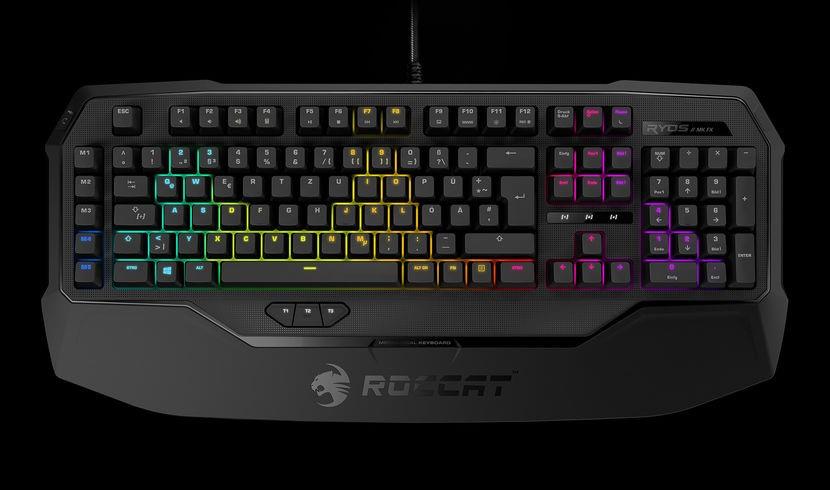 We're no stranger to ROCCAT's line of products here at Gaming Nexus. Back in 2012, we met with the German company when they made their North American launch. Since then, we've watched the company grow both in size and popularity, expanding on their debut lines while also adding in new products to give gamers a wide variety of features and options that work for any budget. While ROCCAT started their keyboard line with the Isku series, the ROCCAT Ryos series has moved front and center as the most dynamic keyboard line the company has. While there are five keyboards in the Ryos line, our focus for this is on the RYOS MK FX. 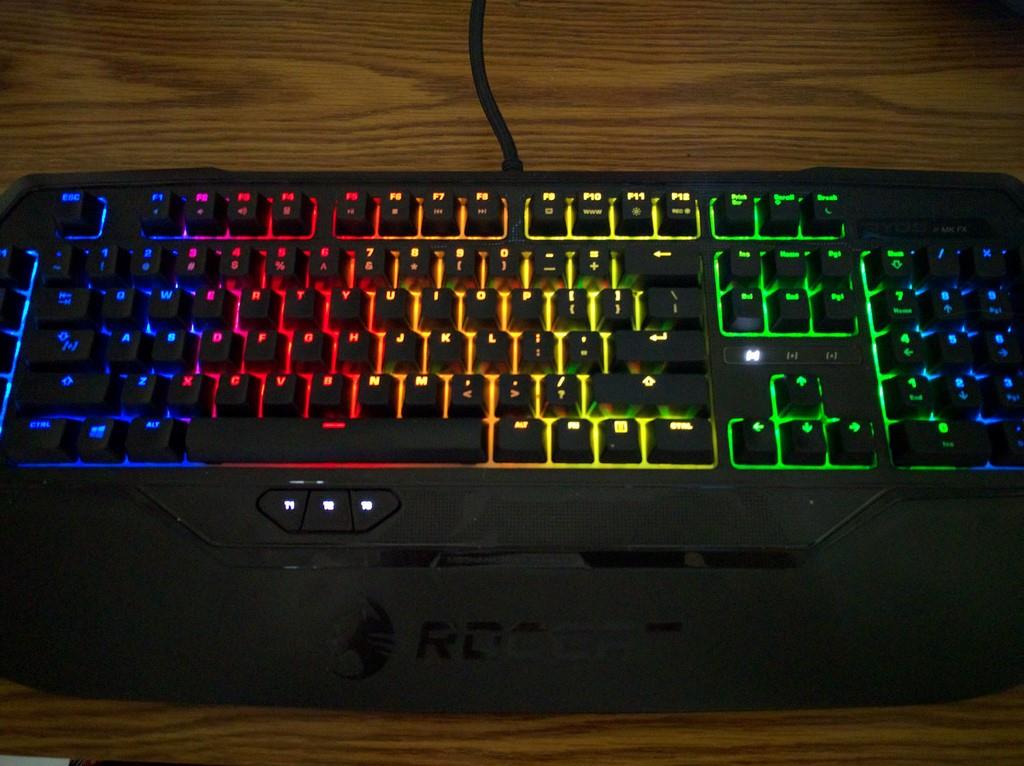 Technical Specifications
As is standard with our accessory reviews, here is the official list of specifications from ROCCAT's website:

The Ryos series layout is your standard gaming keyboard. The five macro keys are off to the left side for easy access with your pinky and are programmed in the Swarm software, which we'll cover later. The keys themselves give a great release and aren't quite as noisy as your normal mechanical keyboard. Typing still feels quite comfortable and won't make you feel like you're waking up anyone in the house when you're enjoying that late night gaming session. The 113 keys all have illumination that is fully programmable based upon what you want to see, everything from solid white to rainbow flashing, pulsing, or wave-like animations. The thumbster keys, which have become a staple of ROCCAT's design, only illuminate white but are still quite easy to see even in complete darkness. The USB cable, which has a split for powering the illumination and for simple connection, will need two ports that are close to one another. It's recommended to use USB 3.0, but a test on my system showed that it didn't matter what ports were used: The keyboard had full functionality.

Swarm Programming Software
The Swarm software can be downloaded from ROCCAT's website and provides the user with the ability to customize about everything you can imagine. There are ten preset animations that include the simple fully lit illumination and runs the gamut by offering blinking, breathing, and the quite fun "wave" animation. While most of the animations are enjoyable to show off with, I found that some of the animations can get a bit distracting. However a user wants to have the keyboard illuminate is completely up to them as the custom mode not only allows simply choices for all the keys at once, but can be used to illuminate the most important keys in a game almost as if it were a legend or a reminder for the user. 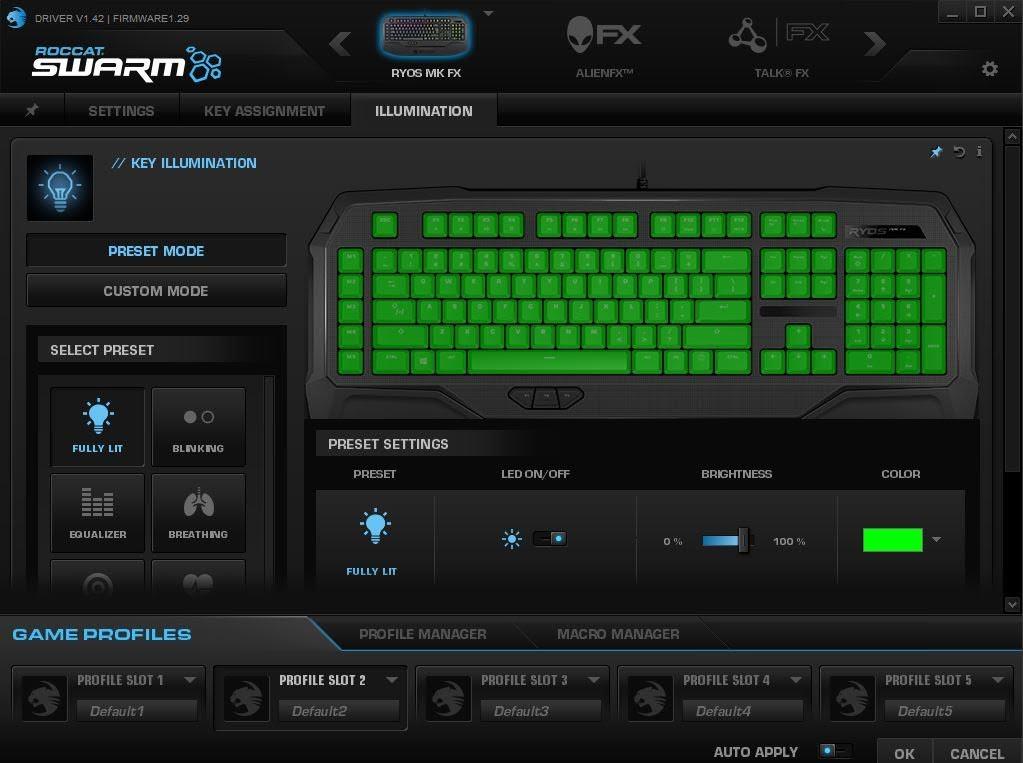 The macro programming hasn't changed much since day one for ROCCAT. What is new is the ability to switch between a layout of the keyboard and being able to simply click on each one for a command or to put on a list form and assign in that manner. The map is a perfect overhead shot and is as simple as it gets. This isn't just for gaming, though, as there are sections for System/OS functions that can turn the gaming keyboard into an office assistant in one click.

If I have a single complaint that sticks out from the Swarm software is that it can be a bit confusing as to what you're downloading, given that this is supposed to pair up with Alienware's AlienFX. Once it becomes clear that it's the correct software, it's quick and easy to load up and uses up almost no memory on the taskbar or in the quick access tray.

An enjoyable experience
I've been using the RYOS MK FX for some time now, and I have almost no complaints, though there isn't much new here given that there's only so much a company can add in order to truly make an accessory innovative. The give on the keys feels fantastic, as I alluded to earlier. The Cherry MX keys are durable but won't wear out your hands in long sessions, whether it's being used for work, general usage, or gaming. The build in wrist rest feels fine though I do wish there was an option for a little padding on the rest. Also, the rest is not adjustable as the thumbster keys more than likely prevent this from being an option. Personally, I wouldn't trade the thumbsters out for the padding if I had to make a choice.

The Easy Shift key, which is a duo-button with the Caps Lock, allows for on-the-fly macro programming. If you haven't used a ROCCAT keyboard before, the Easy Shift technology is basically your one stop shop for programming commands without having to open up the Swarm console. It takes some time to get used to it as you have to hold it down and then select the key to command. It can be confusing because, as I said, it pairs up with the Caps Lock. Changing the programming in the Swarm software causes some issues with this because, if Caps Lock is turned on as the primary function, it can cause programming problems and a user may not be able to program or even use macros unless the software is adjusted back. 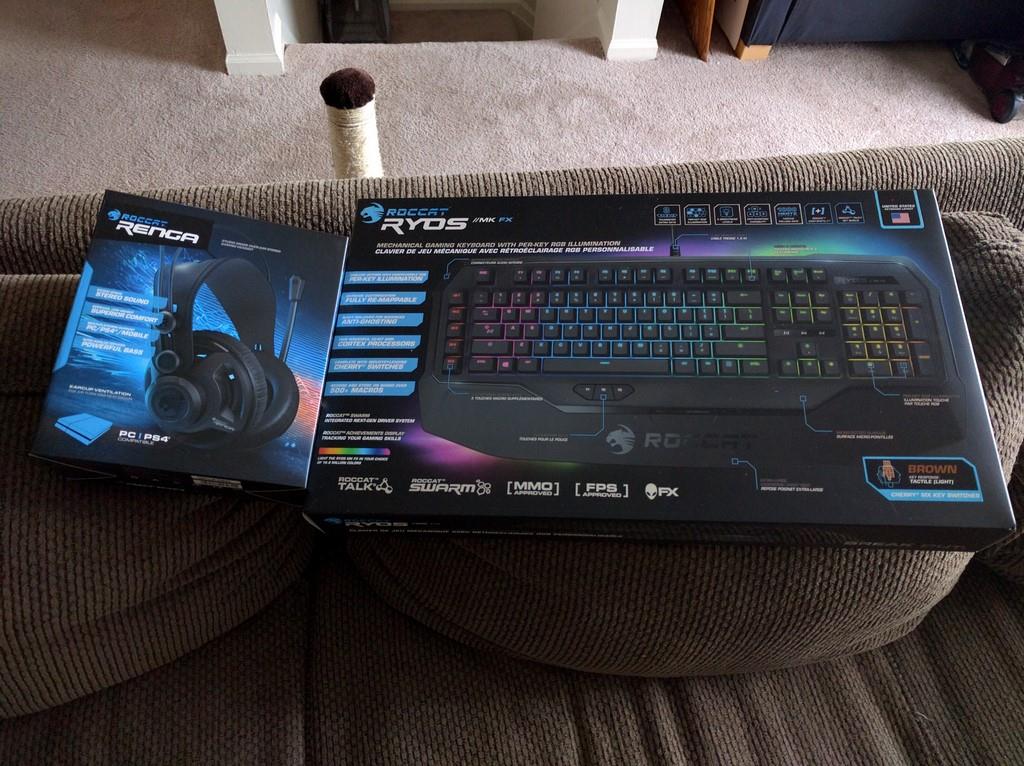 The USB cable is braided to give extra durability. I wish the cable was longer than 1.8 meters, though. My system sits away from my desk and it's almost a challenge to stretch it out given the proximity of my desk in relation to the PC. This is a minor gripe, but hopefully we see a bit longer cables, maybe up to three meters in order to give that little bit of slack needed. No complaints on compatibility, though: USB 2.0 and 3.0 are both able to be used and, while 3.0 is suggested nowadays, I didn't have any programming issues having the MK FX plugged into 2.0 and using the Swarm software.

Final Thoughts
There isn't much else ROCCAT can do to improve their keyboards, but I do hope they prove me wrong. The RYOS MK FX is everything I want out of my keyboard for overall usage. The keys are comfortable and aren't taxing when I'm typing an article or playing a game and the Swarm software, while it can take some time to get used to programming and changing on the fly, is intuitive and easy to pick up after a quick study. I'm still hoping for wrist rests that have a bit more padding in the future as I have a tendency personally to put the base of my hands right on the rest. After some time, it does start to cause my hands to get sore, but that isn't entirely ROCCAT's fault and I can shoulder some of the blame for bad typing habits. The illumination is very fun to play with and fully customizable in order to create any theme one can think of. I'm sure somewhere out there someone is designing country flag designs just to show off, but for those of us who wants a more plain illumination, every color on the spectrum is available. Simply put, this keyboard is everything you want, need, and then some.

The ROCCAT Ryos MK FX currently retails for $169.99 and can be found at most technology and online gaming/PC outlets.

A solid design with keys that can be set to any macro, color, or programmable command, the ROCCAT Ryos MK FX is all one could ever need for a gaming keyboard. A minor issue comes in the wrist rest that still isn't adjustable, but if that's all we can find to complain about the keyboard, then ROCCAT is doing something right.