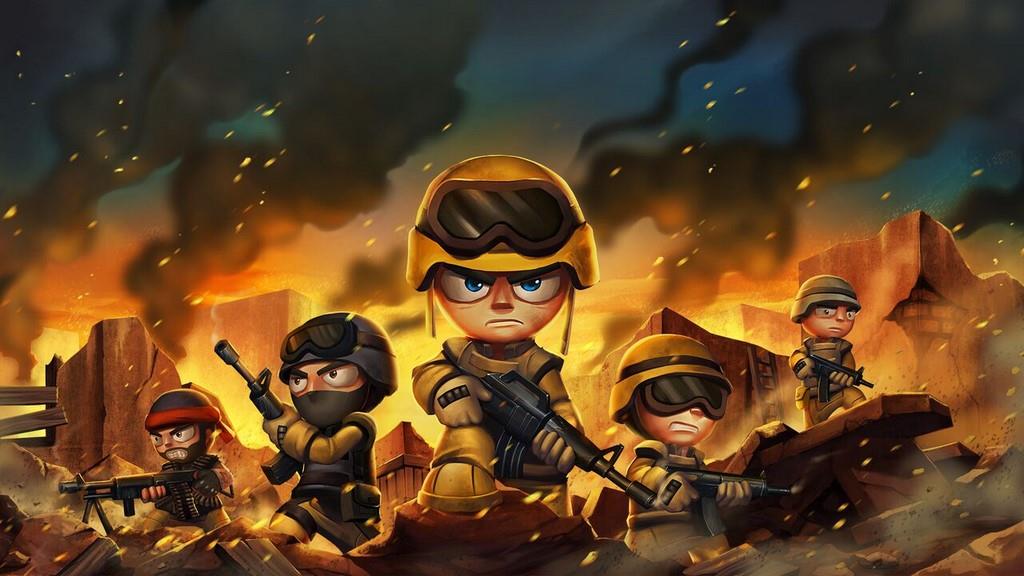 Written by Chapel Collins on 3/18/2016 for XBO
More On: Tiny Troopers Joint Ops

Yet another game has made the questionable leap from mobile game to console game, and yet another time, it hasn't worked. Tiny Troopers fails on almost every level it could have, from its console port to nearly every facet of its gameplay. Basically (and I do mean basic), Tiny Troopers is a twin stick shooter, which has made the way from the mobile world to the console one.  If you've ever played a mobile game before, you already know exactly how this game feels; in fact, I didn't know it was a mobile game when I started playing, but I was immediately able to tell as soon as the first mission began. It's a shame the port is so uninspired, because it's not impossible for mobile games to make for good console games--look at Leo's Fortune, for example, which graced the Xbox One as a beautiful, challenging platformer. Tiny Troopers suffers the extra burden of not even being a good mobile game, however, and I suppose that's where the problems start.

It's always good to try and begin by discussing the positives of something, but I honestly can't think of any positives for Tiny Troopers. The closest I can get to complimenting something is to say that some things aren't as bad as they could have been. For example, the game's sense of humor. It works a few times. But for the most part, it's dull and uninteresting, and when that's the best thing I can say about it, there's a problem. So rather than try to scrape up some positives, I'm going to accept that they are drops in the bucket of why this game is not worth your time, and discuss some of the things that bothered me the most.

The worst offense is the endlessly repetitive, grindy nature of the game. About 10 levels into the first campaign, I distinctly remember being surprised that the game doesn't have microtransactions. Everything about it is set up to require grinding and repetition. The way your squad gets more powerful is partially by surviving missions and ranking up, but mostly by unlocking upgrades for your rifle. These upgrades cost coins, which are basically just points that you get by killing enemies and destroying enemy property. This is something that Tiny Troopers almost did right; the upgrades do make you feel more powerful as you get them. Unfortunately, that's mostly due to the fact that until you unlock them, everything is tortuously slow and weak. The game absolutely crawls for the first dozen or so missions, and the only thing that can change that is your upgrades. The game itself never really changes pace or throws anything interesting at you, even up to the last few missions.

For a game that depends almost entirely on its gameplay to provide the fun, the gameplay is a mess. Twin stick shooting should be one of the easiest gameplay types to get right, yet two important things keep it from working like it should in Tiny Troopers. The first is a terrible, terrible auto-aim system that seems to always manage to lock on to the wrong thing. The second is the snail-like speed at which your projectiles move when you fire them. These two things combine into a deadly duo in which the bullets are too slow to hit moving targets, and the auto aim keeps you from leading your targets to compensate for the (lack of) speed. The option to disable auto aim would have gone a long way to help the game, but that option unfortunately doesn't exist. But even when the shooting does what you tell it to do, it's still slow and doesn't feel like it has any weight behind it. 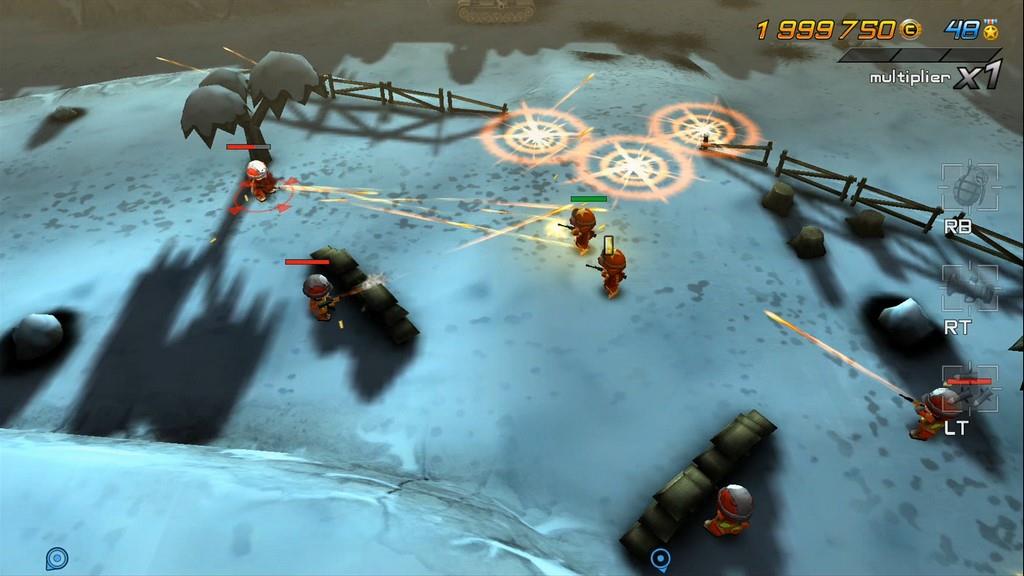 The shooting isn't the only bad aspect of the controls, either. You control a small squad, usually of two or three troopers. They all move and shoot at once as a unit, but it's never clear which trooper is the one you're actually moving, and which troopers are the ones following. This leads to all sorts of stupid encounters with environmental obstacles, where some of the troopers will get stuck on fence posts and the like. Worst of all is when a trooper gets stuck, and the pathfinding system that leads him back to the group sends him barreling into the most obvious minefield this side of the Korean DMZ, and forcing you to either eat the loss or spend your hard-earned medals to revive him.

The medals are what made me surprised there are no microtransactions. There are a few medals per level, hidden in the map, and they function as both collectibles and unlockable currency. They are used to unlock specialists which you can then recruit, or to revive your dead troopers at the end of each level. Even though there isn't, I was just waiting for a menu to pop up after every mission advertising packs of 20 medals for $4.99. The collectible system in Tiny Troopers is so tedious that it feels like it was made that way on purpose to encourage people to spend real money, just so they don't have to deal with it.

The maps themselves are as dull as everything else. They take you through very generic warzone stereotypes: desert canyons with small sandstone buildings, wintery mountaintops with narrow bridges and deep ravines, you know the type. There's nothing offensive about them, but they're just so bland that you barely even notice where you are. The troopers aren't much prettier, either. They hobble around awkwardly in what was probably an attempt to be cute, but ended up looking poorly animated. The enemies are all generic Vietcong-looking, AK-47 toting green-clad cannon fodder, with very little variety between the enemy types, in both looks and function. They don't need to be an assorted rainbow of baddies, but they should at least be interesting if they're all going to look the same. 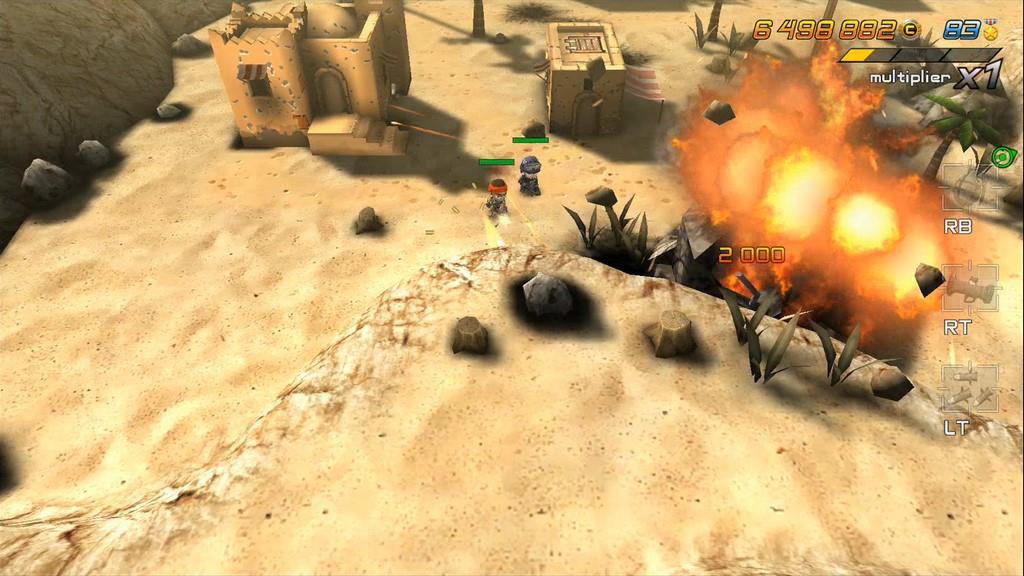 The thing that you might find grates on your nerves the most is the awful sound. The music should be turned off immediately; if I said to you, "imagine generic military music," you've already heard the entire soundtrack in your mind. The gunshots from your troopers rifles are the absolute worst, though. Each shot sounds like someone slapping an empty metal barrel, and there is literally only one sound bite for every gunshot in the game, which begins to trip over itself in the worst kind of way when you have multiple troopers all shooting at once. As ridiculous as it is to say, I actually did enjoy the game more without the volume. If you've been looking for an opportunity to catch up on podcasts or audiobooks, this game is a good opportunity.

Through everything I've said about Tiny Troopers Joint Ops, the word I seem to be finding myself coming back to the most is dull. The game is dull. Even the generic wave survival zombie mode, touted as one of the game's more interesting features, has been done to death. Other than the sound and the shooting mechanics (which is a hefty portion), there's nothing explicitly bad about Tiny Troopers, but everything is just so blasted uninteresting that there's no way I could recommend playing it, and no way it's really all that enjoyable. If for whatever reason you enjoy a mindless grind through repetitive mission after repetitive mission, then Tiny Troopers just may be the game for you. If you enjoy games that are interesting and have ideas, look elsewhere.

Tiny Troopers takes a simple concept of twin stick shooting and does absolutely nothing new with it at all. If you're looking for a game with something worthwhile to offer, you've come to the wrong place.