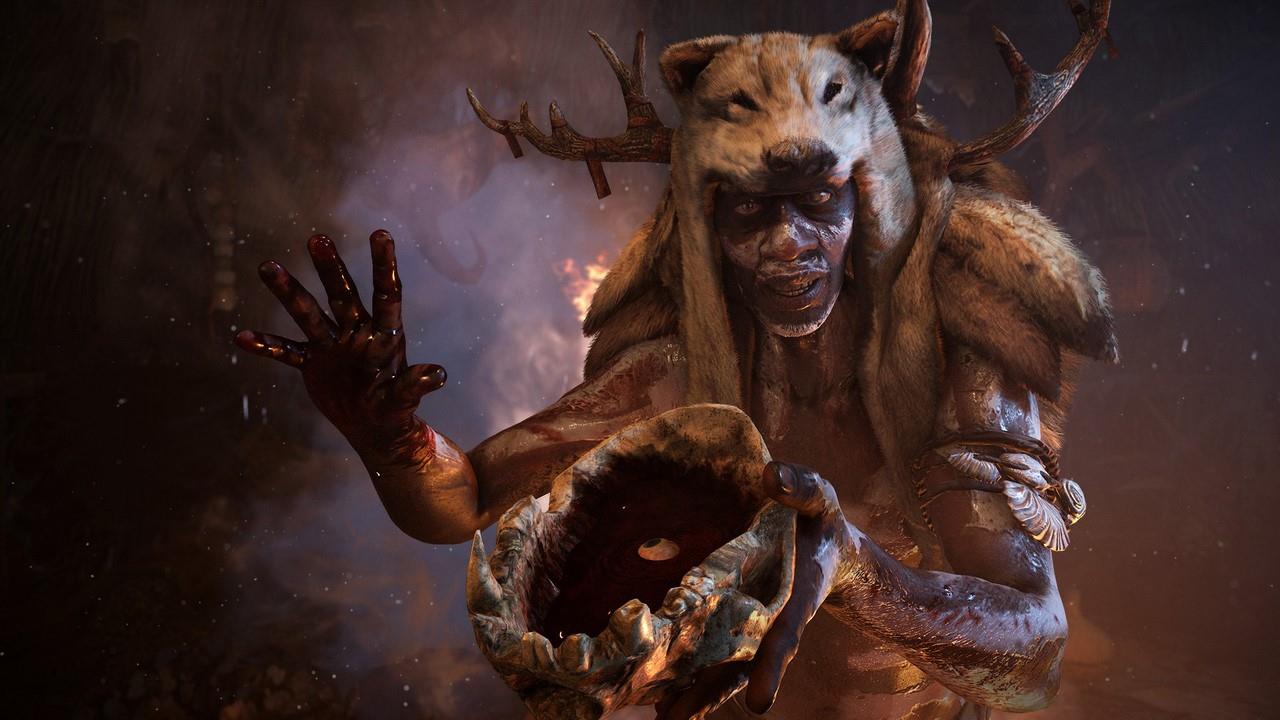 It is now 2016 and, let’s be honest, it takes a lot more than fancy guns and insane action to make a good first-person shooter game. Gamers want more than to run from point A to point B, shooting and blowing up everything in between. We want substance. We want depth. The Far Cry series has always been an industry staples that has been answering the call for more complete experiences. The worlds in these games have gotten bigger and more detailed with each and every entry.

The latest, Far Cry Primal, continues running with the same concept and builds what could be the biggest world the franchise has seen yet. The manner in which it does so shocked people when it was revealed. This franchise, known in the past for fantastic gunplay and huge explosions, strips all of them out. You won’t find any guns or bombs here; instead, Primal takes things back to the Stone Age. Literally.

You assume the role of Takkar, a "chosen" member of the Wenja tribe. Separated from your hunting party, many of which are killed by a Saber-Toothed Tiger, you find yourself on your own and near death. Starving and alone, fate reveals its plans for you. Your people were already close to extinction as stronger tribes have moved into your lands and started pushing the Wenja out. It's up to you to gather the remaining members of your scattered tribe, and build a new village, reclaiming your tribe’s place in the world.

The Wenja have a great respect for the world and its creatures. They look to the land to provide everything they need to survive.  The world of Oros will feed you, arm you, and even defend you. Everything that you need must be found, though. You hunt and scavenge constantly to build tools, expand your village, and feed your people. It is as much of a natural part of the gameplay experience as it was to the lives of the ancient people of the era. 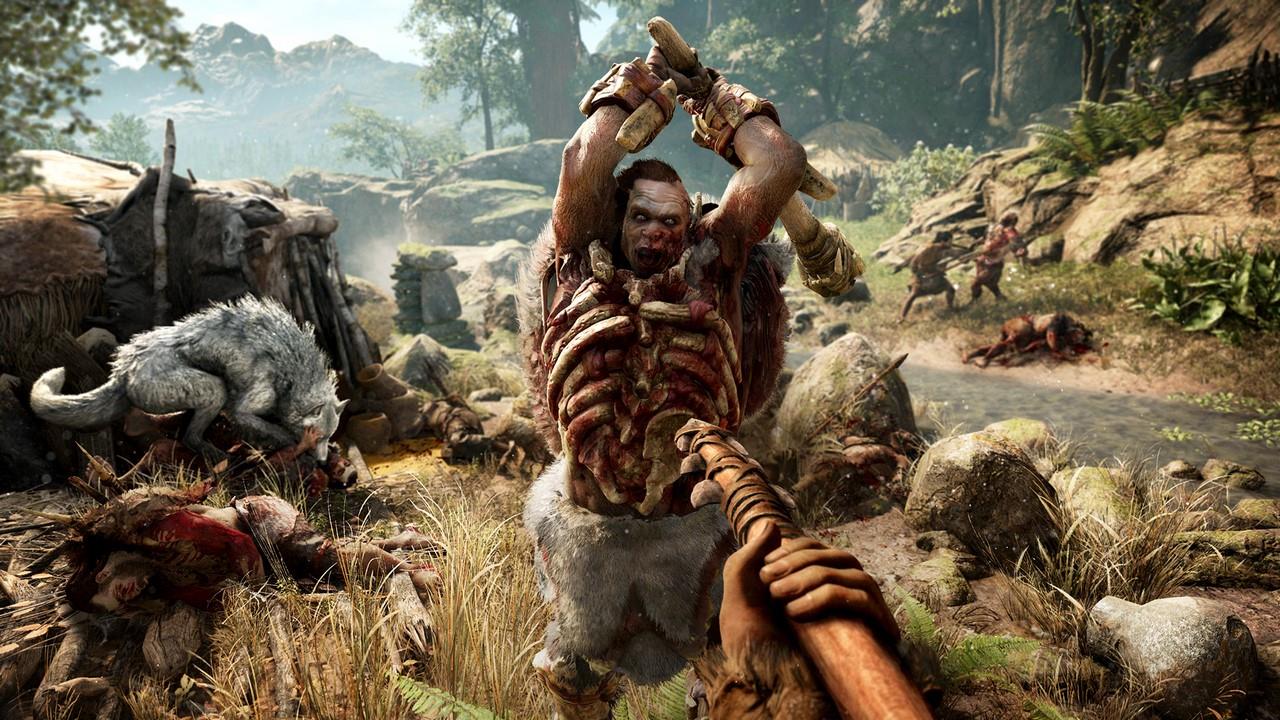 Despite the new setting, this is Far Cry from beginning to end. Tons of things to do are marked all over your map, be it story missions, side missions, cave exploration, hunting to feed your people and yourself, and "Great Beast Hunts," which are spectacles in themselves. The traditional missions feel monotonous after awhile. They all have the same basic goal: usually to take out all of the enemies or creatures in an area, or killing a certain target to obtain a special item. Thankfully, things remain fresh, thanks to the world building. The game world is far more engaging than it has ever been, plus there are tons of things to do.

The amount of tasks in the game is a little overwhelming, and that is only counting the things that officially occupy you. New things are always being added to your map, whether it's new caves to explore, beasts to hunt, or enemy camps and strongholds to overthrow. I am continuously blown away by just how alive this world is. I found myself constantly getting lost in the spectacle that is the natural flow of life and death in 10,000 BCE. The wildlife is amazing to sit back and watch as elk and deer graze in the fields, all while predators such as cave lions and bears stalk them from the trees on the edges. This world is truly functional on its own and it engulfs you completely, right from the start, both day and night. 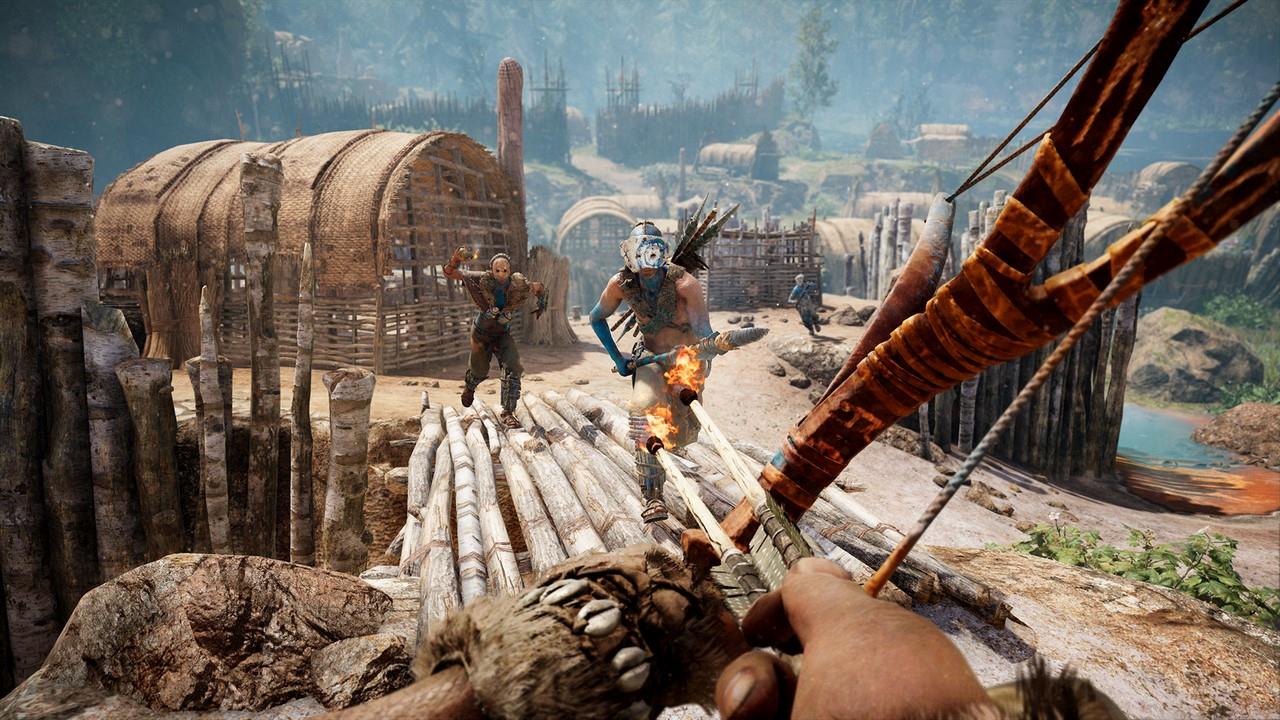 This new chapter of Far Cry is not only Primal in name, but in the imagery and world that it portrays. This is a violent game, but not in a manner that gamers are used to seeing. This is a more realistic, human violence that suits the setting very well. With weapons that range from bone clubs to spears—and even vicious wild animals—death isn't pretty. But it never goes overboard or feels glorified. Instead, it's challenging and engaging; every step and action feels like life and death is at stake.

The wildlife goes a long way in adding to this. There is just something about watching a lion or wolf run down a herd of elk and tearing them to sheds; it’s even more engaging when you personally set the whole thing in motion. You aren’t always fighting; you are encouraged to take the time to make friends with some animals, too. Taming some of the more vicious and wild beasts of Oros is a huge part of the experience. These tamed creatures become your companions on your adventure, and you build up a large stable of them to call to your aid. It's simple and fun. Once you get to the point where you can begin amassing your animal army, the thrill of crouching in the brush with a rare black jaguar at your side never ends. 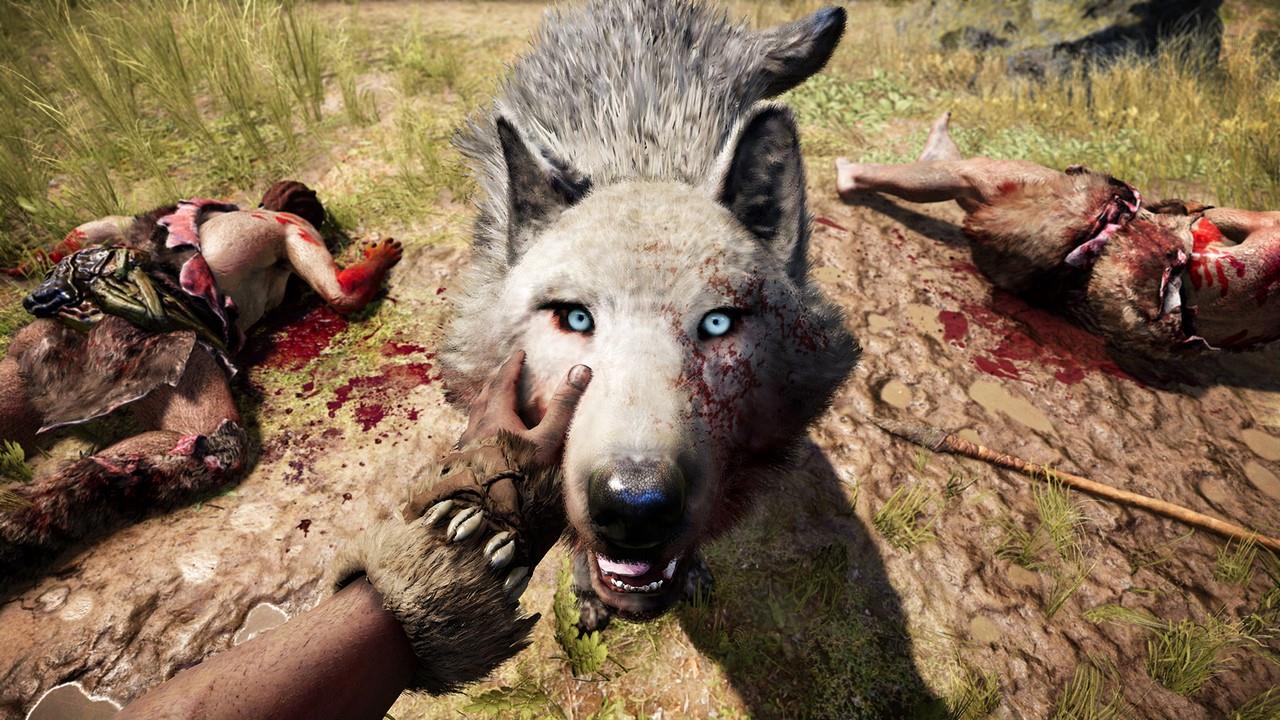 As I mentioned earlier, your arsenal is different than you are used to in other Far Cry games. As a result, there are some gameplay elements that have been added that are refreshing and fun for a first-person shooter. On top of the aforementioned animal taming, the crafting and tracking abilities of your native people make for an incredibly new experience. Crafting is key to replenishing your "ammunition"; it is very thrilling to be in the midst of an all-out battle and have to make a mad-dash for a treeline to find wood and sticks to make new arrows and spears. This adds a good level of thrilling strategy, especially when you need to do it with a massive woolly mammoth charging behind you.

Tracking relies on triggering a special Hunters Mode that highlights areas in the world that your hunting instincts should draw your attention towards. This can be foot or paw prints, or blood spattered on grass or rocks. While this makes sense, the game does rely on it a little too much, as I find myself spending a large part of my play time in the mode. You almost wonder if it should be active all of the time rather than requiring the player to trigger it as needed. 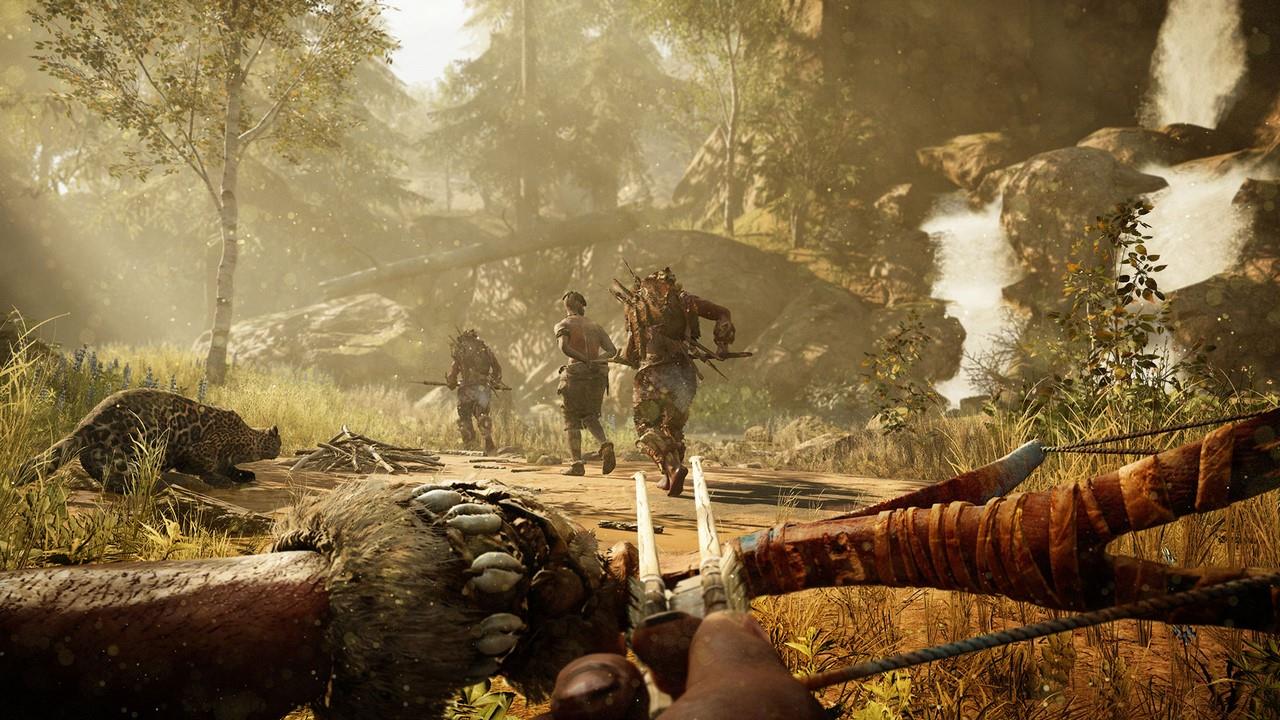 For such a massive and action-filled world, Far Crime Primal runs like a dream, at least it does on the PlayStation 4. The world looks absolutely amazing, from the luscious forestry to the expansive skies and clouds around the mountain tops. There was never an issue of slow down or clipping textures. Nothing ever just popped up on the screen either. The only technical hiccup that I experienced is when interacting with objects in the environment. The game is picky in terms of you being in the precise position to trigger the "interact" function, be it triggering the start of a conversation, or missions with an NPC, or grabbing onto a ledge to pull yourself up. It is pretty impressive how this ends up being my only real complaint.

Far Cry Primal is truly a breath of fresh air for the FPS genre. The setting is original and the gameplay elements that go along with it work perfectly. The world of Oros is truly a thing of beauty and it is so easy to get lost just living within its confines. From hunting, to exploring, to actually pursuing mission objectives, there is so much to do that it almost feels like you're living a second life. If you’re looking for the shooter that does more than just shooting, Far Cry continues to be one of your best options.

Far Cry Primal is a fantastic departure from the usual FPS adventure. While it is formulaic, in a Far Cry sense, a rich and detailed world, as well as tons to see and do, make this an adventure worth taking.