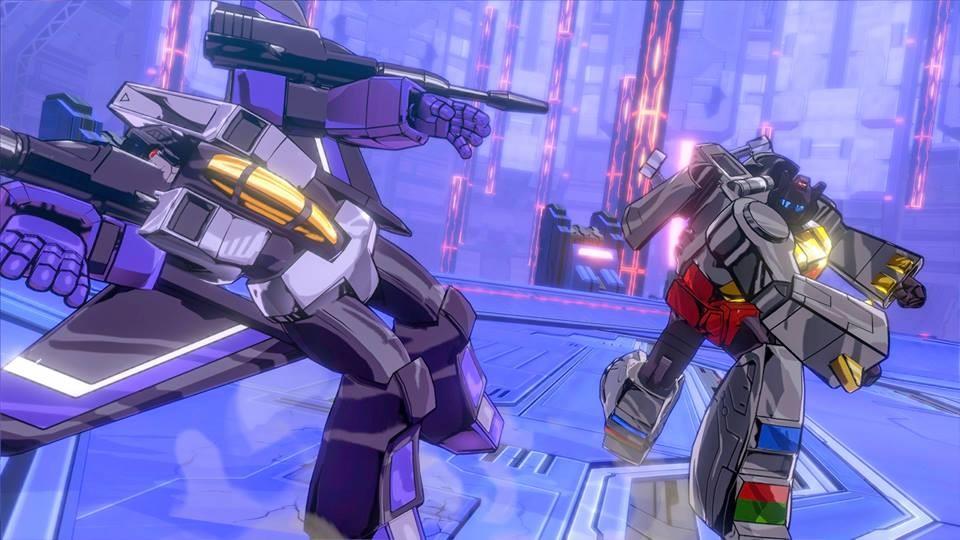 Written by Jeremy Duff on 3/14/2016 for PS4
More On: Transformers Devastation

Over the past decade, Platinum Games has made quite a name for itself. With games such as Mad World, the Bayonetta series, and Metal Gear Rising, it's pretty much become the master of the action-game genre. Bayonetta in particular is a standard to which all other action games are measured. The combat system is perfect for the genre and they have it bottled into a perfect formula, with no hesitation to simply license different intellectual properties and apply as needed.

Most recently, Platinum has applied its magic formula to the Transformers universe. I’m not talking about the bastardized take on the classic cartoon that is known today—thanks to Michael Bay—but the original, 1980's Generation 1 Transformers. We have seen plenty of Transformers games over the past 30 years, but Transformers: Devastation is the one that children of the '80s have been waiting for all their lives. It embodies the spirit of the original show in every way, which will surely put a smile on the face of anyone familiar with the source material.

Just like the classic show, Transformers: Devastation’s story is simple and predictably campy (and I mean this in a good way). Megatron has come to Earth with the intention of turning it into a new Cybertron. Optimus Prime and a team of four other Autobots are going to do everything that they can to make sure that doesn’t happen. This is a battle of the Autobots and the Decepticons in its purest form; this is the first generation of Transformers coming to life right inside of my PlayStation 4.

The isn’t just set in the G1 universe, it looks and sounds just like the original G1 cartoon as well. Platinum uses a gorgeous cel-shaded visual style that mimics the 1980's show. The characters are colorful, detailed, and well animated  The backgrounds, while good looking, are more simple in nature. Some people would knock such a detail. The fact is, that is how I remember the cartoon, so it makes perfect sense to see such a dichotomy in the game. All of the "character" is in the actual Transformers. Many of the original voice actors from the show are used for the game too, which truly makes it feel like the cartoon has come to life. 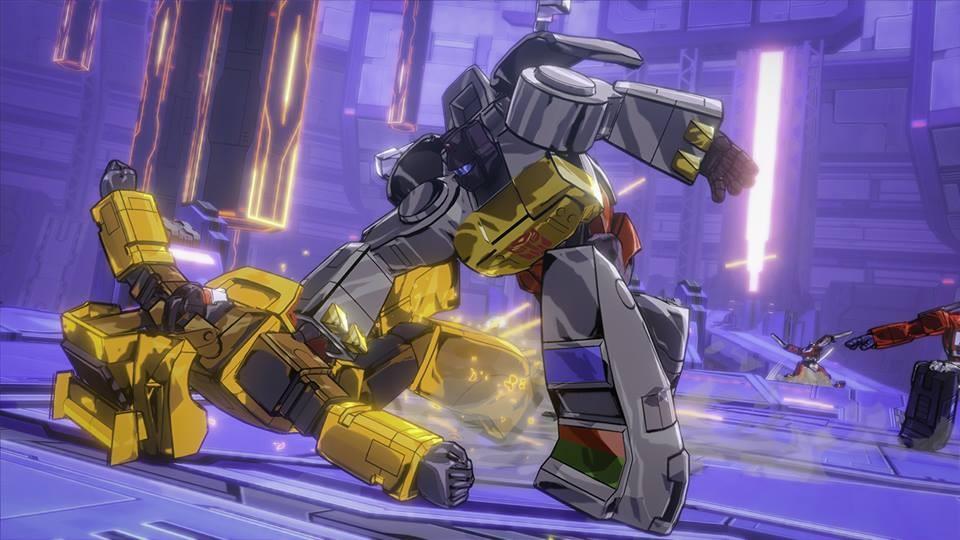 The Devastation experience is the definition of fan service. It has the sights and sounds that will excite the inner child of most 30-somethings, which is combined with that magical Platinum Games formula. The game plays exactly like Bayonetta, complete with a time-slowing mechanic to help you out of tight spots. The combat and combo system is free-flowing, allowing you to pretty much craft endless strings of attacks both on the ground and in the air. The trademark Tranformer transformations are even included, allowing you to flip back and forth between robot and vehicle forms for special attacks.

Each of the game’s five characters has a slightly different feel, based on the weapon class that they use by default. Optimus utilizes axes, which are both quick and powerful, while Bumblebee’s gauntlets give up overall strength for a major increase in speed. Grimlock is the only one who feels drastically different due to his grapple-based fighting style. You can mix and match the styles a little bit as you collect weapons. Each character has four weapon slots, two for melee and two for guns, which allow you to swap your primary weapons on the fly.

Unfortunately, the guns aren’t given nearly the same priority in the game as the hand-to-hand combat. Gunplay really just feels like it was tacked on. There are a few specific moments in the campaign where you will need to utilize your firearms, but outside of those moments you’re likely to forget that you even have them. If it weren’t for having to snipe an occasional enemy off of the top of a building, I might have never used the guns a single time. 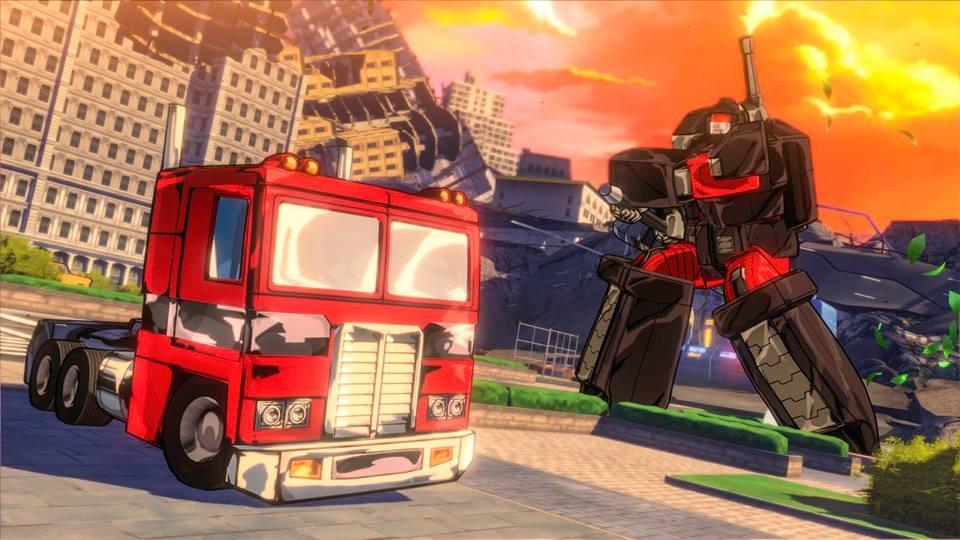 While this game is primarily a straightforward brawler, the development team does make an effort to add depth by allowing you to enhance your weapons and forge T.E.C.H., which you can equip onto your characters to alter their stats and abilities. Sadly, neither of these systems is every fully explained; there appears to be no rhyme or reason to how the process actually works. It just becomes a matter of pouring extra parts and weapons you find into your favorite in order to strengthen them. You never know what the outcome is going to be. The T.E.C.H. process is more of a gamble as you have no idea what you’ll create with each forging session. Once again, you just pour in all of your extra junk and hope for the best.

Like most of Platinum's other titles, Transformers: Devastation is meant to be played numerous times. Each chapter of the campaign gives you an opportunity to earn a grade, as does each level of the secondary challenge mode. The chapters are relatively short, usually consisting of two to three big battles and a boss fight. The boss fights have you facing off against the big names from the Decepticon lineup, such as Starscream and Devastator. Fans of this type of experience will undoubtedly spend hours improving their rankings and striving for perfect "SS" scores across the board. If you don’t appreciate that type of score chase, anything after the six- to eight-hour campaign might feel monotonous. If that is up your alley, though, the game keeps you coming back constantly. 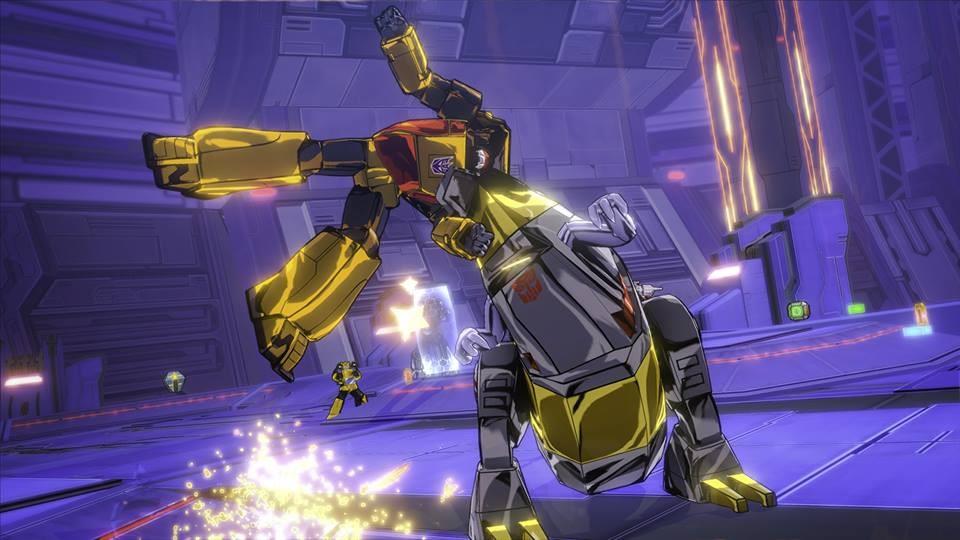 The game does have some issues. First, the incredibly tricky camera can be very annoying to adjust. Things move incredibly fast in Devastation, and the camera doesn’t always do a good job of following the action when you are fighting multiple enemies. The game is also, for the most part, a shallow experience, depending on your opinion of arcade-style brawlers. The focus is solely on the action here; the story is thinly written and the gameplay will surely feel monotonous to some. This type of game is definitely an acquired taste. Thankfully, it matches my tastes wonderfully.

Depending on your perspective, Devastation can range from being either a solid action game to what is practically a religious experience. Fans of the genre will appreciate its solid gameplay mechanics and engaging combat. Fans of the original Transformers will find it to be the game they’ve always wanted and a portal to their youth. The game just puts a smile on your face when you see it come to life and realize that you are taking full control of the G1 cartoon. Either way, it’s an enjoyable experience for all, and one you should definitely check out.

Transformers Devastation is the definition of a fan-service game. An excellent combat system layered over sights and sounds that take children of the '80s back to their youth creates a memorable experience for Transformers fans. The only sad thing is that it never really goes deeper than that.