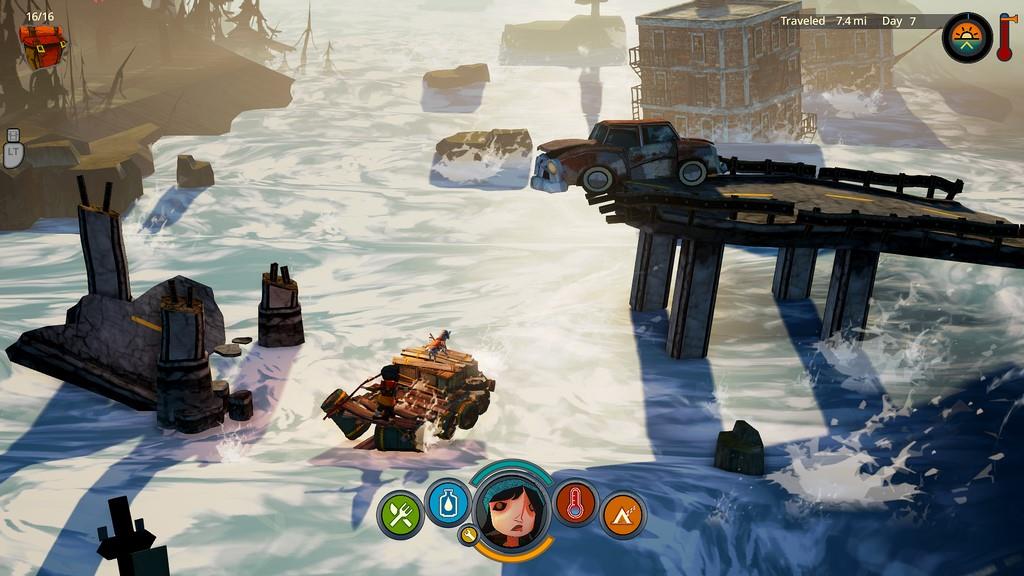 The Flame in the Flood

The Flame and the Flood is not a game for hoarders. At times it will seem like your greatest enemy isn't the weather or the wolves, but the number of things you can carry. The gist of The Flame in the Flood is that you are a lonely survivor of a post-flood America that has left only sparse camps and settlements scattered along a rushing river. At the onset, you are paired with a canine companion who helps you scrounge and scavenge as you barge against the currents, trying to stay alive.

The challenge comes not so much in the scarcity of resources, but in often not having the right tool for the job when you need it. You have 12 inventory slots on your person, six on your dog, and 12 more on your raft. Each slot can be stacked with items of the same variety, to a given limit, depending on the item. So, you can hold 10 dandelions on one slot, or six pieces of lumber, etc. What you're really doing is using that inventory to manage and balance you own hunger, thirst, warmth, and sleep, while avoiding other ailments that will wreak havoc on those key ingredients. Most often, the reason you die is not for lack of resources but lack of the right resource. Carry a wound too long without treating it properly, starvation when you've enough water to cross the Sahara, or running into a pack of wolves without a torch, are all recipes for death (or a certain Alanis Morissette song). You might have a full pack, but you must manage your levels across all of those disciplines of survival. And the biggest barrier to not having the right resource is often because you are overwhelmed with so many others that you run out of space to store more.

This is especially true of the early playthroughs, and to get anywhere there will be a lot of playthroughs, as the game doesn't hold your hand. There is a lot of trial and error in learning what's important and what's not. The earliest stage of the game might as well be called "The Search for Flint," as without crafting a flint knife quickly (which is a needed component for many of the mid-level crafting recipes), you won't get far.

After that usually comes the search for food, because mulberries don't satisfy a mighty hunger. But, quickly, you find that your slots are full, and then it comes time to make some tough choices about what to do with your horde of supplies. Thing is, you never really know what will be at the next camp. You can get a good idea, though, by learning the environments, but the river itself is procedurally generated, so every playthrough is unique.

After each river navigation section, there are usually pockets of three camps or settlements. Each has their own advantages. Some always have a campfire for quick warmth or getting your wet clothes dry. Churches, for example, provide better shelter, while wilderness areas have a much greater chance to yield some food or foes. But the river is fickle and hard to fight. Many times you can't visit all of the locations at a given stop, so, knowing what you need and which location gives you the best chance at scoring it becomes vital.

As for navigating the river itself, I feel that is one area the developers, The Molasses Flood, were really on point with the control scheme—as steering your raft is a giant messy pain. The current always seems to have a much greater control over your destiny than that flimsy oar ever does. It's a chore to push that boat around, but that's exactly how ferrying a raft down a river should be. It illustrates how little control you really have in this environment and how fighting the tide can often be a disastrous course of action.

The Flame in the Flood offers two basic game modes: Campaign and Endless. Campaign is much more forgiving, with checkpoints to save your progress and return to after you die, and a little more story surrounding the experience. Endless I found much harder, brutally so at times. However, maybe that's because by the time the game left Early Access, and I was finally able to try Campaign, I was already well familiar with all the mechanics from all the Endless play. In any case, both modes follow the same mechanics and similar procedurally generated environments, It's jus that on one of those modes the credits will roll when you hit a certain point, while the other will just wait patiently for death to eventually do its duty. 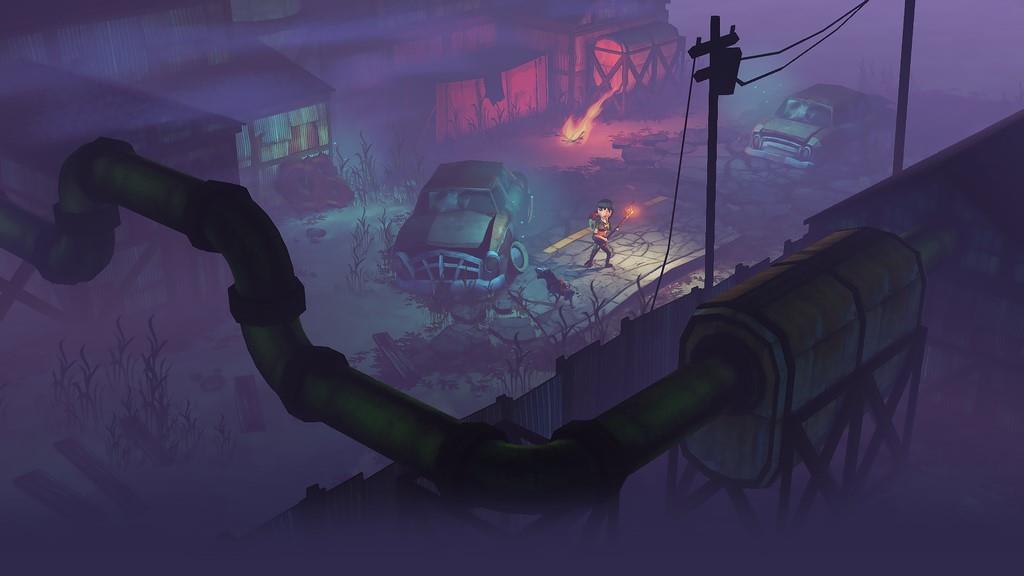 The early press about the game was always quick to point out how Chuck Ragan provides the soundtrack. He composes a very pleasant, down-home ramble to the background, and I was digging it. The game works with mouse and keyboard, but does have controller support if you want to go that route. I played almost exclusively on controller because the already-hard-to-manage rafting was that much harder without it. The art direction and visual style can be a little creepy up close, but, for the most part, it works very well.

The biggest frustration came in the micromanaging of that limited inventory. Not so much making the tough choices, but rather the simple act of moving items in and out of the player, dog, and raft. I get that you can't access raft materials unless you're standing on the docks, but there were so many times I had to go through the extra tedium of moving items in and out from my dog's pack just to use them, even when the canine is right there at my heels. I would rather the dog not even have a pack and just give me those six extra slots, but that would break a key gameplay mechanic in that when you die, items in your dog's inventory can carry over to give you a leg up on your next attempt. To me, that just feels like cheating, but surely it isn't because it was programmed in as a gameplay mechanic. However, the end result is more tedium because, to hedge your bets on this route, you need to keep those most important bits and pieces in your pooch's inventory at all times to help in the next life. But then, when you actually need the thing, you have to drag it out of that spot into a free one of your own, then move it back. Also, there's no drag and drop on items. So, even with mouse and keyboard, you having to click away furiously to push those products back and forth. It's a chore. And while there is an attempt to make different items have different values per plot (as mentioned, you can carry 10 dandelions in a single slot, or six lumber) the ratios are pretty far off from any logical basis. Because on what planet do 10 flowers take up the same space or weight as a single 2x4, let alone six? 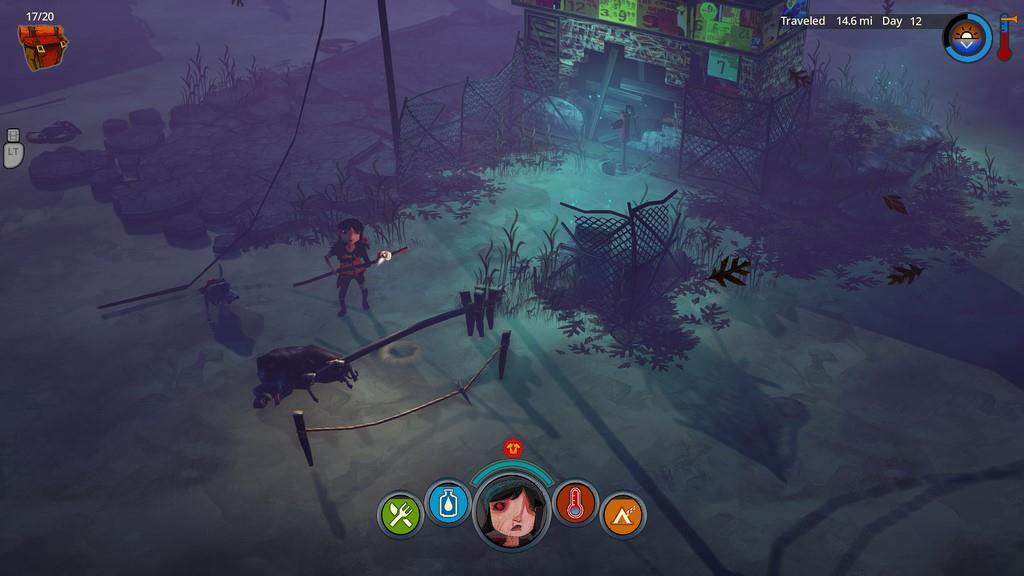 I also discovered a few bugs, even after the game left Early Access, like standing next to a campfire or stack of boxes but being unable to interact with them. Only once was it ever a game breaker, and that was before the full release. The bigger gripe just comes in the general repetition of the experience. The environments ramp up from what you'll find in the early stages, introducing snakes and wolves and bears, but once that novelty wears thin, the game is pretty much as the play mode advertises: Endless. There aren't any grand set pieces, it's just a slog to stay living. You can't really amass anything in the limited inventory to carry as a trophy of past exploits; it's just that grind of making it from one camp to the next. In the early days, that's all you need, and it's a lot of fun.

The Flame in the Flood really prevents me from putting it down. I have to explore one more camp first, or see what's around that next bend in the river. But, eventually, that same-same trial over and again wears itself thin. Ultimately it's a cute game. It sounds nice and plays well enough, but it's far from epic. The playthroughs end up mushing into one another and nothing really stands out. It is initially very frustrating and you die a lot. Then it does get very fun. But at the end of the day, it only offers so much. What is on offer is far from poor, but also somewhat fleeting.

The Flame in the Flood is a good game, and offers a bit of fun getting the hang of the crafting, the environment, and figuring out what really is important to keep and what else you'll need to consume or discard to make room for the former. It's not without it's bugs and frustrations, but in the thick of it, it really does drive you to push for one more camp, to explore one more section of river before putting it down. But once you've had your fill and finally do put it down, I'm not convinced you'll go running back to it. There is a bit too much repetition in the experience. It's a good game, but lacks staying power.