I’m a bit stubborn when it comes to Fire Emblem games and it all started with the first game that was released in America, all the way back on the GBA. I managed to get caught in a loop where I saved right before I made a move, and unfortunately at the time, the move always had the same result. This meant that I was losing a unit I cherished, and ever since then I’ve been real hard pressed to finish a Fire Emblem game. When Fire Emblem: Awakening was released a few years ago, I finally got a better taste of what the series had to offer, even though I had to turn off the perma-death mechanic to do it. The result was a much more enjoyable experience for me. It’s been three years now, and Intelligent Systems has finally followed up the excellent Awakening with a new entry in the Fire Emblem series. Though it breaks convention compared to the previous titles, it also offers a fresher experience by effectively splitting the campaign into two different stories, titled ‘Birthright,’ and ‘Conquest.’ While the distribution method for these two games is a bit confusing to someone who just wants to play a new Fire Emblem, the overall package is one that lives up to the quality that we’ve come to expect from Intelligent Systems, especially after the slight disaster that was Codename S.T.E.A.M.

The kingdoms of Hoshido and Nohr stand at the brink of war, and you stand in the middle as Corrin, who must make a choice, stand with the family that raised you, or the bloodline you are still a part of, despite your past. This is where Fire Emblem Fates branches off. The Birthright package will place you on the side of the Hoshido, who hope to fend off the imperial Nohr army. Choosing Conquest will keep you with the family who raised you, serving the King of Nohr in an effort to lay claim to the surrounding lands. Neither story paints a perfect picture of events, and each game has their own conclusion after twenty seven chapters. If you were unable to secure the limited edition of the game which comes packed with Birthright, Conquest, and an extra chapter, Revelations (which we will be reviewing separately), then I recommend the DLC purchase, as the whole game starts to deviate down the different paths after the sixth chapter. Thankfully if you don’t want to play through the opening chapters again, you can actually start from where the branch takes place. 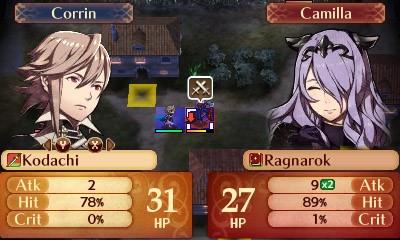 Choosing to side with Hoshido will give you a slightly more friendly experience. You can grind out levels in exchange for easily obtainable gold, your missions are typically a simple affair of routing your enemies, and the overall difficulty seems to be on the lighter side. Siding with Nohr will give you a much more varied experience, your missions will contain more specific goals, you won’t be able to grind to increase your character levels, and the overall difficulty is higher. Although if you’re like me and hate losing units, the game is actually a little bit more friendly in this regard. You can opt to not have the perma-death mechanic in play, should a character fall in battle, and if you’re really struggling, you can use the new ‘Phoenix’ mode which brings characters back into battle on the next turn. The mission variety of the Nohr side is definitely a much more rewarding experience but the Hoshido path feels a little more forgiving, which I would recommend for beginners.

One of the biggest additions in Fire Emblem Fates is the ‘My Castle’ mode, which serves as a hub between battles. As you complete maps and missions you’ll earn Dragon Points which in turn can be used to build stores, decorations, event spaces, and even defenses for when other players invade your castle thanks to the Streetpass functionality. You can also upload your castle to allow people to visit via the Internet, and you can check out the castles of other players. I highly recommend taking advantage of this feature since it will net you materials which can be used to pick up some nifty accessories that will help out when you’re defending your castle, and they provide some aesthetic changes to your party members. I constantly found myself spending a lot of time between chapters here, mostly just browsing other people’s castles, hoping to pick up a few extra vegetables to feed my dragon guardian.

Each campaign is made up of twenty seven chapters, with one battle per chapter. The typical flow of battle starts with some story exposition, a little bit of fighting, and then some more story before closing out the chapter with some new revelation or party member throwing the story for a loop. This time around I felt a lot more attached to the characters, part of that is probably because of how much other people dote on your character. The excellent localization gives you a sense that the Nohr are truly your family, while the Hoshido are happy to have you back, but there are obvious detractors on both sides, so things start to get complicated for Corrin very quickly. 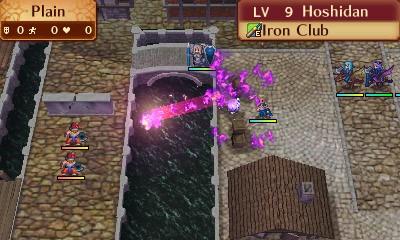 Combat still follows a rock-paper-scissors type of distinction. Swords beat Axes beat Spears, and then there are the outside elements like bows and flying units. In a very welcome change, weapons no longer have limited durability, except for healing items, so there’s no more needing to worry about stocking up on weapons for character. You can just focus on improving that character’s weapons as they rank up in skill, making them all the more invaluable on the battlefield. It’s definitely in your best interest to keep all of your allies alive for as long as possible, since they game does provide you with a finite number of units throughout the game, and losing just one archer, or magician can really affect your capabilities in future battles.

One thing I’m not too thrilled with is that for whatever reason, there’s no ‘restart battle’ option within the menus. If you want to restart, then you’ll need to use a soft-reset option that is available. I get that it’s expected that you really have to commit to every move, but sometimes it really sucks to reach the end of a map, with one enemy unit left, who somehow manages to one-shot the archer that you’ve been trying to level for quite a while so you can use a Master Stone and upgrade their cla… uh… sorry. Yeah, death sucks, but personally I’m torn between playing with the original intentions of the developer in place, and fighting the urge to chuck my 3DS when I lose a really important (to me) character. Another new addition to battles are Dragon Veins, these spots on the battlefield can call down various effects, depending on the situation in battle. Find yourself slogging through some sand? Turn the ground to plains. These Dragon Veins can also provide succor to restore the HP of your party members, or call down a heavy rain to lower your enemy’s capabilities, or deal damage. But take care, as these can be used by certain enemy units as well.

So, there’s been a big talk of censorship, localization efforts, whatever you want to call it. Personally I am of the mind that a game should be left as its creators intended, so while I’m bummed that some stuff has been cut from the Japanese version (the touch mechanics of character interactions, a Japanese voice track), this game doesn’t really suffer as a result of these changes. But in the future Nintendo, just give us the whole game. Stop telling me, a grown adult, what is okay for me to consume in my media. It’s a bit galling that you feel like I can’t handle the content that your team developed, just because of cultural differences. 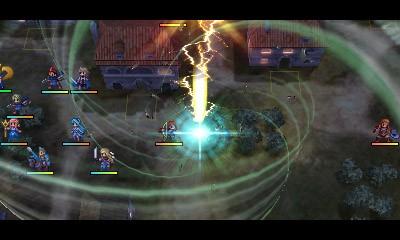 While I was disappointed in the lack of a Japanese vocal track (I can only stand hearing ‘You are the ocean’s grey waves…’ so many times, especially when it is just same the recording used throughout), the English cast still performs quite well. The soundtrack is quality work, worth owning a copy of for sure. This game also impresses from an aesthetic standpoint. The two storylines have their own distinct visual style, and huzzah, the characters no longer have stumps for legs! The frame-rate can start to drag and dip on some of the busier battles, even on a ‘New 3DS’ but it doesn’t detract too much from the overall quality of the visuals.

Fire Emblem Fates kind of lacks cohesion without being in a complete package, so I’m not exactly thrilled with how the game is essentially split into three different titles that requires users to pay quite a bit to acquire the entire experience. Setting that aside, Fire Emblem Fates is an excellent game, regardless of which side you choose. Personally, I enjoyed Birthright more than Conquest, but both offer an exceptional experience that any Fire Emblem fan would enjoy. If you’re new to the series, I suggest starting off with Birthright and use that as a test bed to gauge your interest in the other titles. Regardless of which game you choose, you’re getting an excellent experience from start to finish.

Fire Emblem Fates: Birthright and Fire Emblem Fates: Conquest are two great tastes that taste great together. Provided you're willing to put up with the high cost of entry. Even if you only settled on one title you'd be getting an awesome game with plenty of content that will keep you busy.