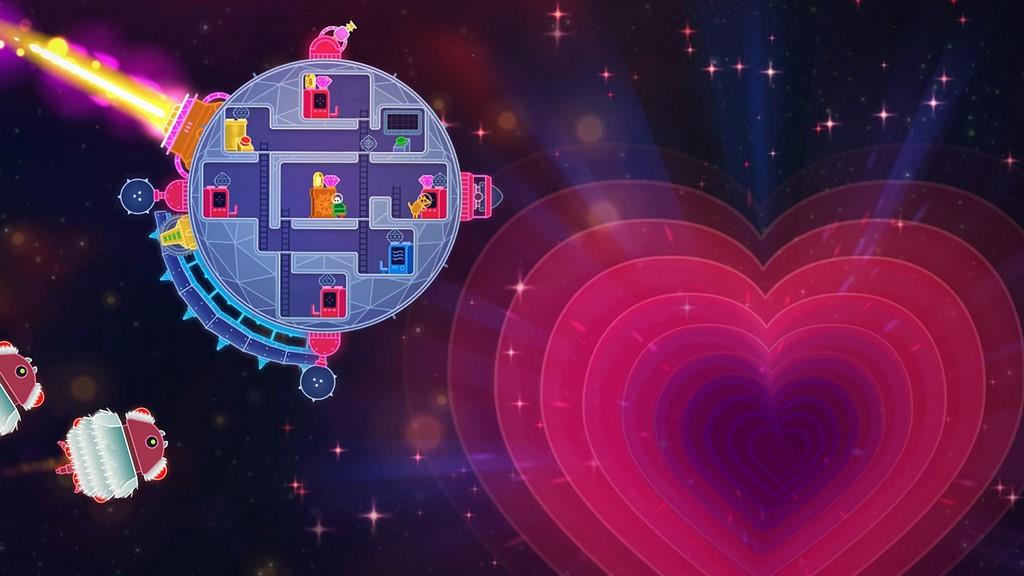 Written by Randy Kalista on 2/11/2016 for PS4
More On: Lovers in a Dangerous Spacetime

First of all, that title, right? Lovers in a Dangerous Spacetime. Like it was ripped from a 1940’s pulp digest called Famous Fantastic Mysteries or Thrilling Wonder Stories. Yet it's so apt a title, too. Lovers in a Dangerous Spacetime has co-op ready to go, right out of the box. And it’s not hard to imagine the two main characters as lovers. Whether they’re romantic lovers, platonic lovers, or animal lovers, the two are about to get real cozy in their gumball-shaped spacecraft, the also perfectly named Gumball Zero.

Some catastrophic event tears apart the universe’s Ardor Reactor. Love is wrecked, and you—you two lovebirds—have to restore love to this two-dimensional galaxy. So you hop into Gumball Zero, the first of six unlockable ships, and man your battle stations. You’re looking at a cross-section of the ship. Ladders and platforms run top to bottom, left to right, from the turrets to the steering, and from the shields to the map room and the constantly rotating BFG. The layout is practical enough, but you have to jump through some hoops when running from one station to the other; hopping over ledges or sliding down ladders; stuff is in the way, just to intentionally trip you up a little bit.

Gumball Zero is a spacecraft, but the stages take you through seemingly more than just outer space. Sometimes you dive through watery islands, topped with palm trees and sandy beaches, turning the ship into a submarine. Sometimes you course through asteroid-pocked caverns, like you’re in the movie Inner Space, coursing through blood-streaming veins. And sometimes you’re just out there in a mix of planets and suns and solar winds, like you’re stirred into some giant bowl of galactic soup.

The art style is neon and darkness, polygonal and minimalist, but drawn with the joy of a grade schooler scribbling on notebook paper. One level feels like the method to its madness is clear. Then another feels like a Frankenstein of all the designs that came before it. Either way, pushing back the fog of war and seeing what’s around every corner will  pleasant surprises in your face. 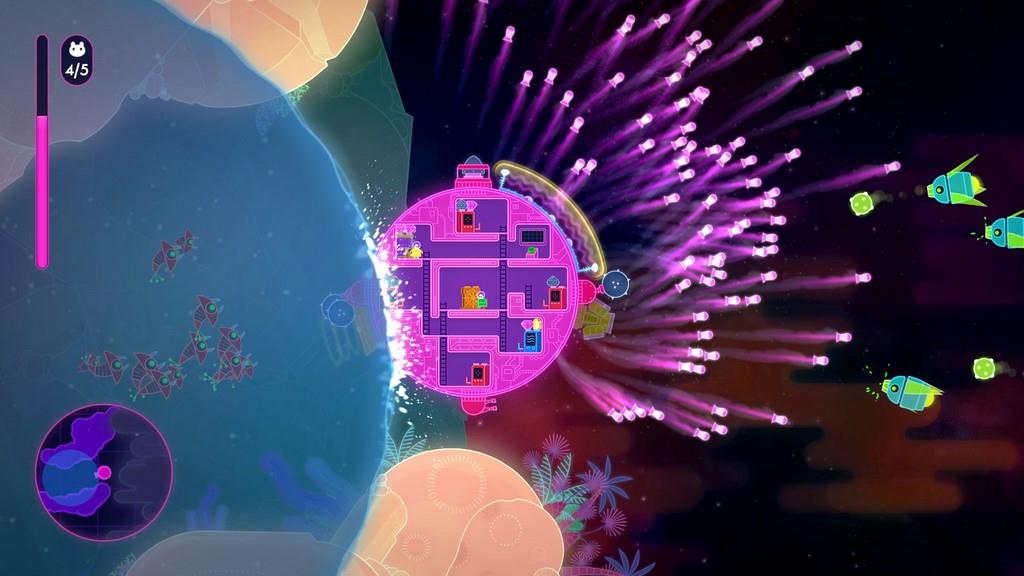 There are times when I don’t want to turn on Lovers. It sometimes tips the scales to too hard; it's sometimes too much work. The line-drawn style, the perky electro soundtrack, and the insistence on bright rainbows of color is, from time to time, more than I can digest. While staying on just this side of quirky, Lovers is like a sugary drink to a diabetic, deliciously dangerous to consume in large quantities.

Then I get into the groove. I’m moving the ship and sending my little cat buddy to the shield controls. Or I swing by the top turret for a quick kill and order cat buddy to the bottom turret to take on a wave of bad guys down there. Or I hop on the steering wheel to gun it out of some creature’s tractor beam while cat buddy swings the shield around in time to block an incoming meteor. The journey has leisurely moments, too. But a fire-breathing swarm of space bees or a hungry school of galactic piranhas is never far off. Shoot away at the cages holding the adorable little bunnies, frogs, foxes, etc. that you’re saving, listen for the enemy sirens to go off, then prepare for the onslaught. Save enough captured buddies and they band together, shooting rainbow beams from their chests, exploding locks keeping the heart-shaped exits shut. And with that bit of Care Bear Stare business handled, the door to the next level opens.

On a couple levels, though, I can’t trust my cat buddy. He gets trigger happy from time to time, and that can prove disastrous on occasion. To curb his enthusiasm, I sit him in the corner, staring at the map screen. But 99 percent of the time, cat buddy (or dog buddy, depending on who you roll with), is a stellar co-pilot. Well, the one thing he specifically can’t do is pilot the ship. But he can do everything else, and he’s good. Real good. Especially on shields. Cat buddy pulls off amazing stunts when I have a bullet hell coming at me from one direction, a hard surface coming at me from the other, and an angry boss fight coming at me from every other place. 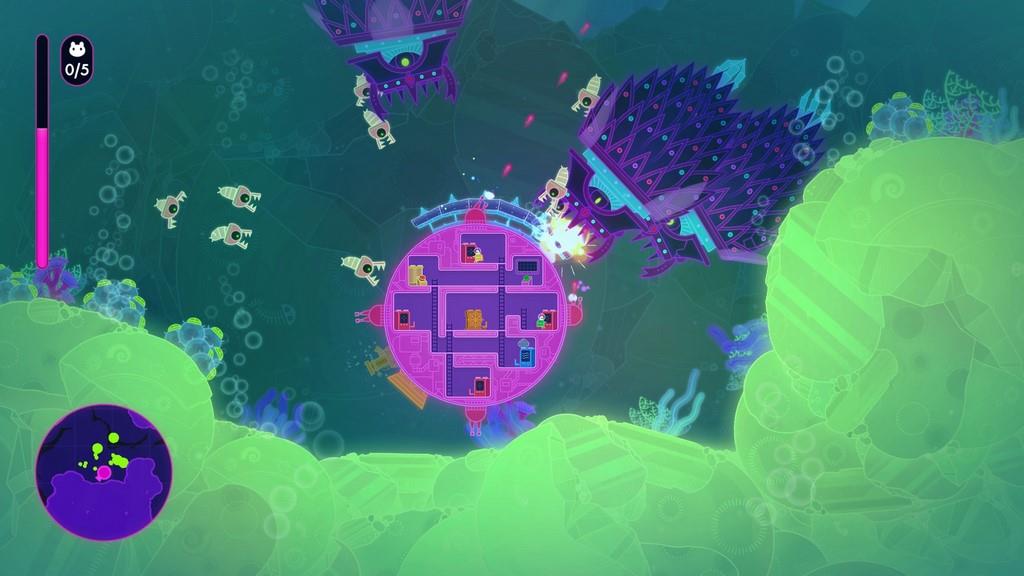 The stars make constellations, and the constellations make up the bosses. The big bosses. They even operate like metaphors of themselves, in a strange way. Take Orion, for instance. Orion is a constellation identified easiest by its belt. So, in Lovers, Orion splits at the waistline--at his belt--and attacks you from two angles. Or Ursa Major, a bear. He attacks with his arms. He has the right to bear arms! See? I could do this all day.

Even though the bosses act all mad, they look like they went through the same Candyland and Kool-Aid filter as everything else. They just hurt more when they reach out with giant weapons and thump Gumball Zero. Still, once you get into the swing of things, Lovers is fun. Like when you pull a Hunt for Red October maneuver and barrel Gumball Zero, full speed ahead, into missile-launching boats. Or wiping a screen full of enemies like a squeegee with your 360-degree spinning circular saw. While cleaning house is neat, so is making a great escape.

Some of my best escapes involved a giant bomb slowly exploding, its growing radius getting bigger and bigger while I stomped on the gas and pushed Gumball Zero up and out of some cavernous asteroid. Another great escape involved one of those megaton blasts going off, a blizzard throwing me sideways off course, two giant "honeycomb killers" (what else am I supposed to call these giant bee things?) firing enormous torpedoes at my 10-percent shields and somehow--somehow--me jetting for the exit and making it out by the skin of my teeth. 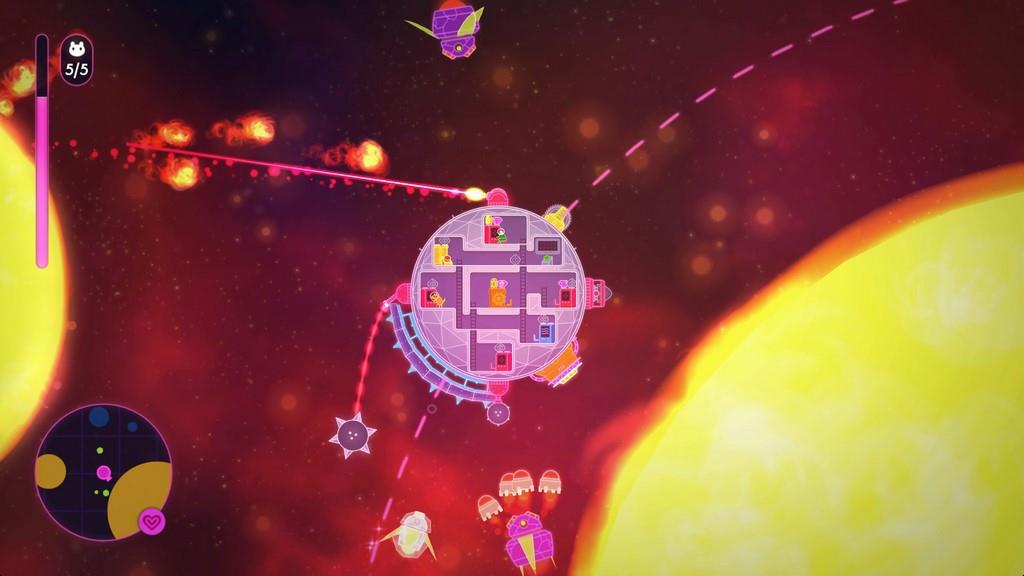 Many other threats, sometimes neutral in nature, fill up the screen. One minute you’re fighting the pull of a gravitationally intense white dwarf star. The next minute, you’re dropping in and out of that “where are we now?” feeling when getting blown around by solar winds or pulled under from tidal undertow. Stick around long enough, and you’ll even bob your way through a laser-light prison.

The whole time, you’re grabbing power ups and using them as ship upgrades. Throwing a metal upgrade onto a turret gets a much different effect than throwing it onto your shield or steering wheel. Every once in awhile I come up with a combo that I haven’t tried yet. Some are more practical than others, but each one of them is surprising. Likewise, each new ship design packs its own surprises.

The Banana Split ship has a divisive set of rules to fly by, while the Jelly Roll ship turns the entire thing around 360 degrees--and has a squishy layer protecting you from planetary impacts. I just unlocked Gumball M, which operates like Gumball Zero in every way, except each station comes equipped with metal gems, turning the guns into ball-and-chain morningstars. I have to learn several things over again.

But Lovers in a Dangerous Spacetime feels better and better every time you play it. I’m completely invincible when I take my newfound piloting skills and return to the first chapter. Then again, Orion is such a jerk that I kicked the difficulty down to casual and, after cat buddy and I finished him off, we never went back. I’ll have to do that sometime. This dangerous spacetime is worth saving again and again.

If My Little Ponies trampled a bouncy house and shot it toward Saturn, then you’d have an idea of what Lovers in a Dangerous Spacetime looks like. It’ll be tough to make an FTL-like more adorable than this one. The frantic one- or two-player co-op is mandatory and makes for a not-so-lonely outer space.