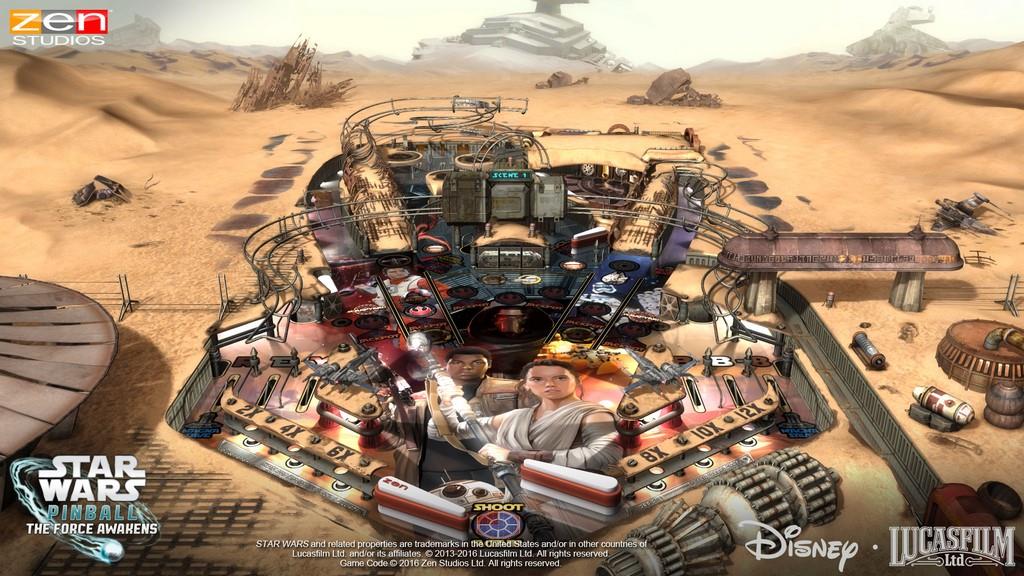 Written by Jeremy Duff on 2/3/2016 for PS4
More On: Star Wars Pinball: The Force Awakens Pack

With Episode 7 reigning over the film world, Zen Studios wasted no time getting another batch of Star Wars pinball tables out for their Pinball FX2 platform. We’ve seen tables for nearly all of the movies up to this point and some of the animated shows, so the trend had to continue. The Force Awakens Pack, which is now available, pays homage to the new movie with a pair of tables that celebrate the sights and sounds of J. J. Abrams’ film. While both of these tables are solid additions to the expansive Star Wars Pinball roster, neither one proves to be as memorable and entertaining as the actual film.

The first table is titled The Force Awakens and serves as a tribute to the entire film. Featuring a relatively short playfield, the design focuses on the scrapyards of Jakku. While there are small references to other locales from the movie, the overarching theme is the junkyard settlement in which Rey spends the early part of her life.

Winding rails and chutes make up a majority of the table and reaching them is the key to your success. The lack of open area on the field can make this difficult table at times. If you are not successful at hitting your ramps consistently, you will find yourself battling a fast moving ball as it ricochets off of the various scrap piles and you have very little time to react as it bounces back towards your flippers.

There are a wide variety of audio clips throughout your games on this table that appears to be a mix of both movie clips in custom sound bites crafted for this game. I have been very critical of the voice over work on the Marvel tables in the past but the work found here is incredibly solid. Finn’s voice is the only one that I would take issue with, but there is enough variety that his quotes don’t really stand out. The music is also top notch, drawing directly from John Williams’ incredible score, which is something that I could listen to endlessly.

Visually, there is a ton of detail found in The Force Awakens. Aside from the various remnants of crashed ships and detailed railways, there are a lot of things happening on screen. Rey and Finn are both bouncing around the field constantly and you will see frequent Tie Fighter / Millenium Falcon dogfights happening in the air above the rails.

There are 12 different scenes from the movie that are represented here that make up the missions that you can trigger. Obviously, some spoilers are included as these missions sort of give you the Cliff’s Notes version of the film, highlighting such pivotal moments as the Rathtar attack on the freighter and the ultimate showdown between Kylo Ren and the protagonists from the film. It is a little strange having so many scenes represented in the same setting (Jakku); I would have really liked to see a little more visual variation on the table, perhaps having different areas and multiple second-screen opportunities. 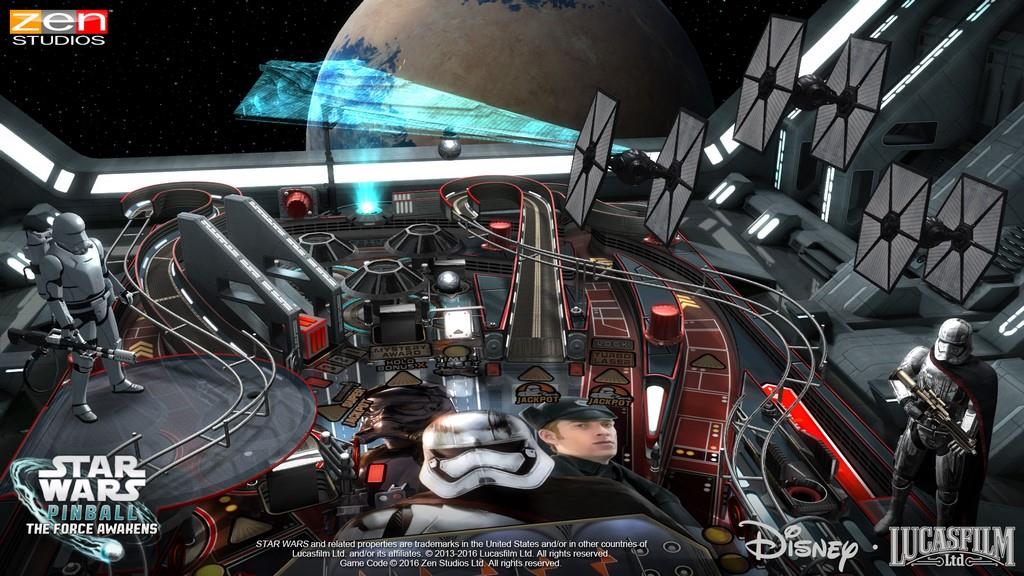 Despite that complaint, one aspect that I did enjoy a lot on this table is the sense of verticality that comes with the rails. There is really a sense that the playing field is a lot bigger than it looks as your ball(s) go up and through the tunnels and rails. It helps alleviate the claustrophobic feel of the cramped scrapyard.

The Force Awakens proves to be a solid offering for Star Wars Pinball. They do a good job of referencing all of the events of the film and squeezing in appearances by all of the major players. The shallow playing field does take some adjusting to your playstyle, at least for me. As a result, I find this to be much more challenging table then a lot of the previous Zen offerings. This doesn't make it bad by any means, it just that you should really put in the effort to learning the layout before you expect to begin posting high scores.

The second table in the pack is titled Might of the First Order and it is dedicated to the new face of the dark side. Overall, I absolutely love the design of this table although it does have one major flaw that really keeps it from being great. Visually, the playing field is set in the hangar of a Star Destroyer. You see a lot of Stormtroopers and droids running around, maintaining the various ships, supplies and equipment of the First Order. While it is a pretty wide open playing field, there is a lot of movement going on that can easily distract you. 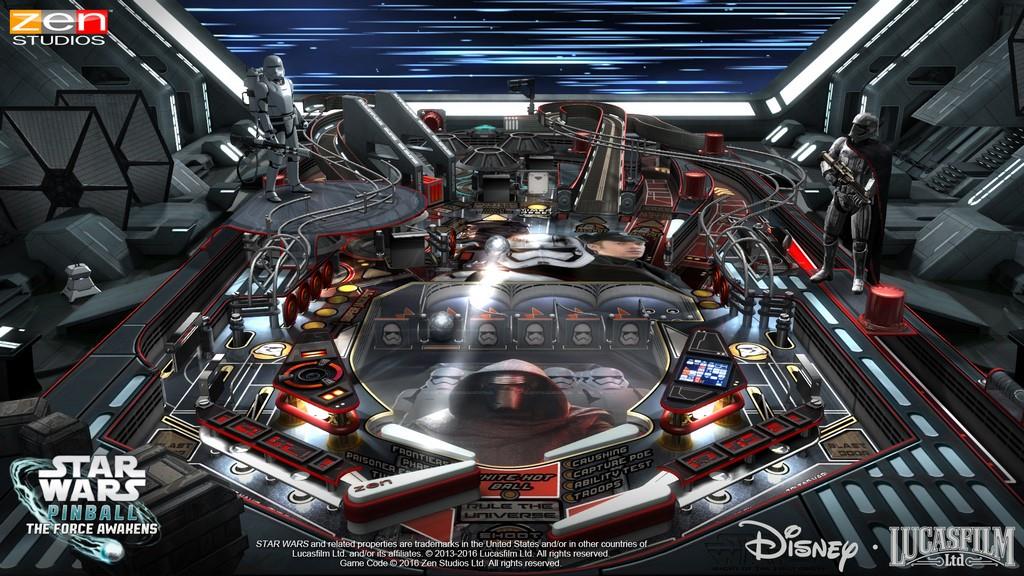 There are a few rails that wrap around the top of the screen, which proves to be the busiest area. This even includes a nice, 3D hologram of a Star Destroyer that appears and is used in a variety of missions. This looks really cool in action and adds a lot of personality to the table. All three of the main faces of the First Order are featured heavily: Captain Phasma, General Hux and Kylo Ren. Voice samples for each are used consistently during your gameplay and Ren’s, in particular, is really well done. The open playing area of this table leaves give you a lot more breathing room than The Force Awakens, so you aren’t struggling to react to quick bouncing pinballs. As a result, things play a little slower and perhaps a little easier here.

The big flaw in this table lies with the secondary playfield that exists under the primary field. In other tables, you usually see a screen transition to a secondary area, but that doesn’t happen here. Instead, there is transparent glass over the secondary area and the camera view doesn’t alter in any manner when you move into the new playing field. It is extremely difficult to tell when your ball shifts to this area which often causes you to miss the scoring opportunities that it offers. The flippers for this bonus are located slightly higher than the regular flippers, causing you to struggle to focus on the set that you need to use. As bad as it is dealing with this area with a single ball, once a multi-ball option gets triggered, it becomes nearly impossible to manage when you have balls on both fields.

Despite my complaints, these tables really are two excellent additions to the Star Wars Pinball lineup. They both nail the look and feel of the film and do great things with all of the characters from the film. A little more variety in the setting of The Force Awakens and an adjustment to the secondary play area of Might of the First Order would improve both of these tables dramatically.For a bundle that is only $5, you really can’t go wrong with this pack.

Once again, Zen nails the Star Wars look and feel with another set of tables. There are issues to be taken up with both, but overall they prove to be a lot of fun and great additions to the Star Wars Pinball line.