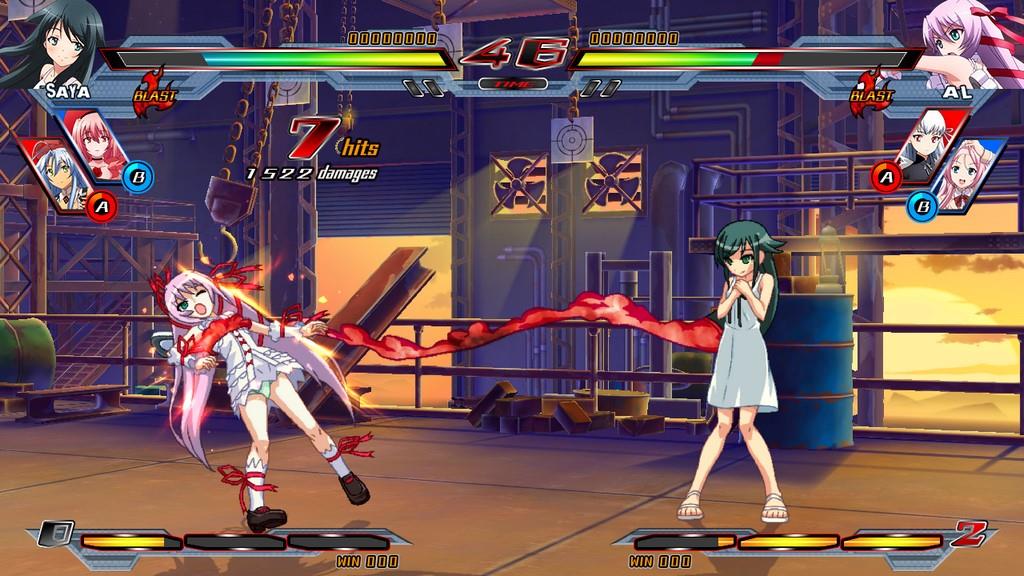 It’s been a while since I’ve checked out a game from EXAMU, the developers behind the Atlus/Aksys published Arcana Heart series. Now it looks like XSeed has decided to pick up the publishing rights to their games, and they’ve picked up a new all female fighter; Nitroplus Blasterz: Heroines Infinite Duel. This 2D animated fighter plays quite a bit like other EXAMU games, so people who are familiar with Arcana Heart are going to feel right at home, but casual fighting game fans might find this one flying under the radar, so hopefully this review brings this game to your attention, because it’s quite the enjoyable fighter, despite missing a lot of features that have become standard over the years.

Featuring characters from various Nitroplus franchises, and a variety of anime series, Nitroplus Blasterz is packed with characters, fourteen playable characters, and another eighteen support characters, giving you plenty of options in battle. Headlined by Nitroplus mascot, Super Sonico, players will find characters from Fate/Stay Night, Psycho Pass, Guilty Crown, and Gargantia on the Verdurous Planet just to name a few. The bulk of the cast comes from a few different Nitroplus visual novels, including Saya no Uta, Tokyo Necro, Phantom, and Full Metal Daemon: Muramasa. Two characters from other all-female franchies, Heart Aino from Arcana Heart, and Homura from Senran Kagura will be available as free DLC during the first month of the game’s launch, so make sure you pick them up to fill out the roster.

While you’re not likely to recognize a good chunk of the cast, you’ll find plenty of different any interesting fighting styles that play to your preferences. I eventually settled on the Lovecraftian horror, Saya, as my main through the game’s requisite story mode. Nitroplus Blasterz does have a flair for themes of Lovecraft, as is evidenced by the Another Story mode that unlocks after completing the base story. The ‘main’ character Al Azif is apparently a manifestation of the Necronomicon, and the story makes many references to the Old Ones and the end of the universe. This gets quite confusing with necromancers shifting between bodies, and characters participating as different entities referenced in the Lovecraftian stories, but it’s definitely a trip. Don’t expect to stream much of this game, pretty much all of the story is locked out from the PS4 version, so as to prevent spoilers, but seeing that notification that I’m entering and exiting a blocked scene got old rather fast, considering how frequently it was appearing. Completing the story mode is thankfully not as arduous as some fighting games like to be (looking at you Persona 4 Arena), which means you’ll be through it within about 2-3 hours.

Combat is pretty similar to Arcana Heart for those who are looking for a point of reference. Three attack buttons for a weak, medium, and strong attack, one button for what’s referred to as the Escape Action, and there’s a heavy action that allows for a charged attack that will result in a knockdown, or can be used as a sweep. I highly recommend playing this game with a stick if possible. While all buttons are easily accessible with a controller, it just feels a lot more natural to play this with a proper arcade styled stick. The actual mechanics of fighting are fairly free form, which is par for the EXAMU course. This means that there is a lot of experimenting that you’ll just need to do on your own, as there is no training mode to give you the basics of gameplay, which is a disappointment, so I recommend spending at least a little time in the Training mode just to get the hang of a character. Once you get the ground game down, then it comes time to learn to juggle, which is where you’ll find a great deal of the damage in this game is done, just check youtube to get some ideas. 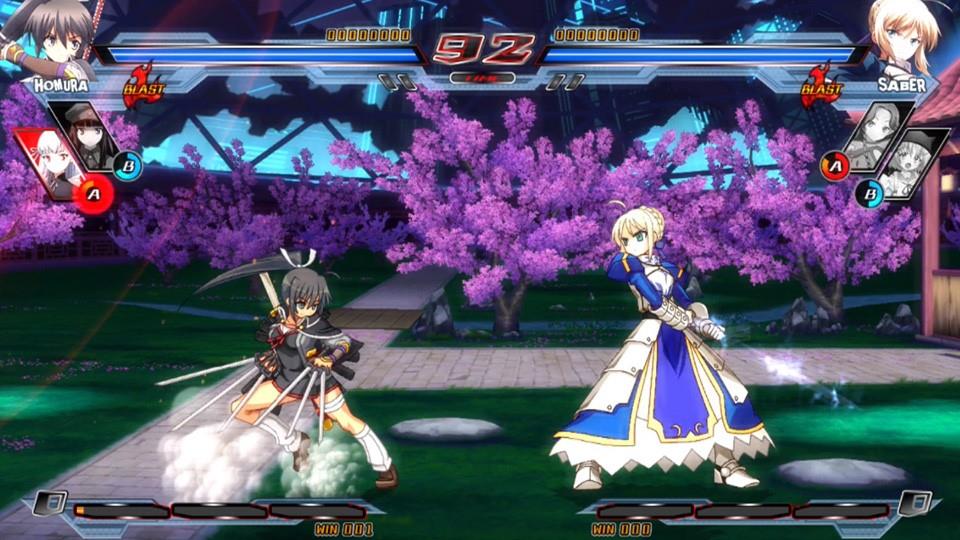 I’m a hard sell on visuals in fighting games these days, after Guilty Gear Xrd, traditional 2D visuals need to be at the top of their game, and while Nitroplus Blasterz runs really well, the sprite-work just isn’t that great. Not a bad looking game in the slightest, but in order to accommodate for so much chaos that can be on screen at once, you can see that character animation frames are kept pretty low.

Nitroplus Blasterz also features a score attack mode, and a network mode which includes the basic Ranked Match, Player Match setup. Unfortunately the Ranked Match setup is kind of terrible. Unless you know your Partner characters by name, you’re not going to have any chance to visit the character selection screen, so learn the names of your preferred Partners. The Ranked Match settings screen seems like more of a filter than a player search, and unfortunately during the course of this review I could never find another player available for a match, but it looks like the game shares leaderboards with the Japanese version of the game as they were already well populated. Even the non-ranked matches came back empty, which means that there weren’t any other players out there for me to battle during this pre-release period.

Nitroplus Blasterz: Heroines Infinite Duel has the unfortunate distinction of launching just two weeks before Street Fighter V. That means that fighting game fans might migrate off this game long before giving it a shot, so let this review serve as a notice, don’t sleep on this one. EXAMU gave this game a lot of love, and while it’s missing some things that have become standard fare for most of the big fighting game franchises, it still has plenty to offer in terms of raw gameplay and fanservice.

Nitroplus Blasterz: Heroine's Infinite Duel is definitely an above average title. It's a shame that cutting corners in a few key places (like the online play menus, and the lack of a good combo training mode) really cheapens the experience. The wacky story is worthy of a playthrough, and the character roster is filled with some of the most unassuming combatants you've ever seen. Except Saber, she's a bad-ass.