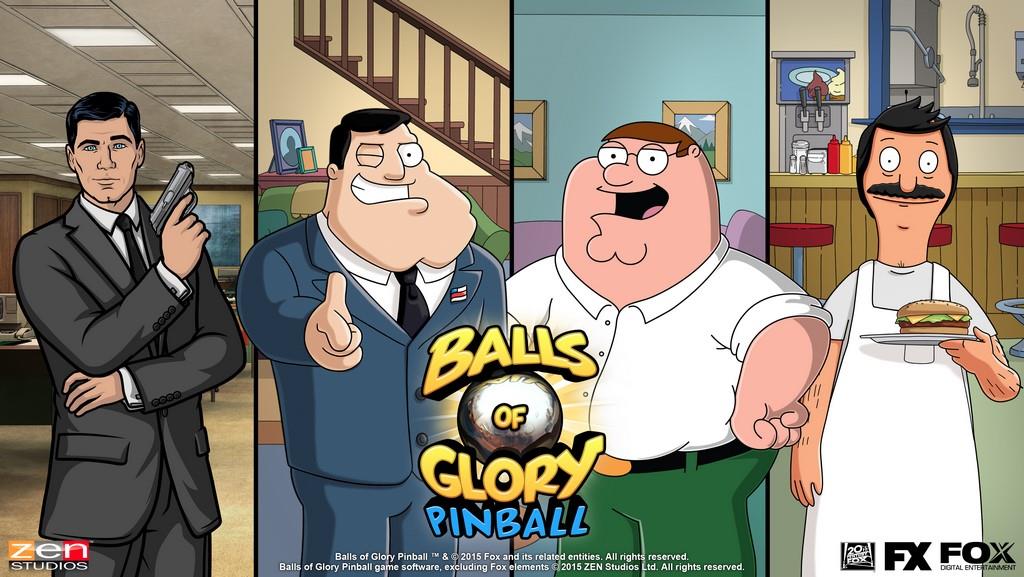 Zen Studios never ceases to amaze me. These guys can make a good pinball table out of anything. Thankfully, they don’t have to just choose “anything” for their inspiration as they continually line up great franchises to tie into their Zen Pinball 2 creations. One of their latest creations bundles four iconic animated shows into a new foursome of tables. While not all of the included tables are created equal, the pack as a whole is certainly worth the price of admission.

The Balls of Glory Pack brings the worlds of Family Guy, Archer, American Dad and Bob’s Burgers to Zen Pinball 2. Each cartoon is given their own custom table, complete with soundclips, decor, and characters from the show. While the Archer table looks like most of the other tables we have seen on the platform in the past, the other three have gone with a new, cell shaded style of visuals that makes the tables look more like a cartoon. Rather than a rendered playing field, the flippers, bumpers, and everything that you see from top to bottom looks like it was ripped directly out of the animated show. This creates a very unique look although I must say it took me a little why to get used to compared to the traditional visual style.

Let’s break it down by individual table:

The Archer table has you assuming the role of the world’s most dangerous spy, Sterling Archer. As the spy, all of your various missions throughout the game have a common goal: spell out the word “AWESOMENESS” and open up 4-ball multiball, Wizard mode. The playing field has a very wide-open design, with only a few ramps which are all located at the very top of the screen. This gives you a lot of area in the center for your ball to move around and for extra curricular activities such as the chase scenes with your cars and other, rendered character appearances. 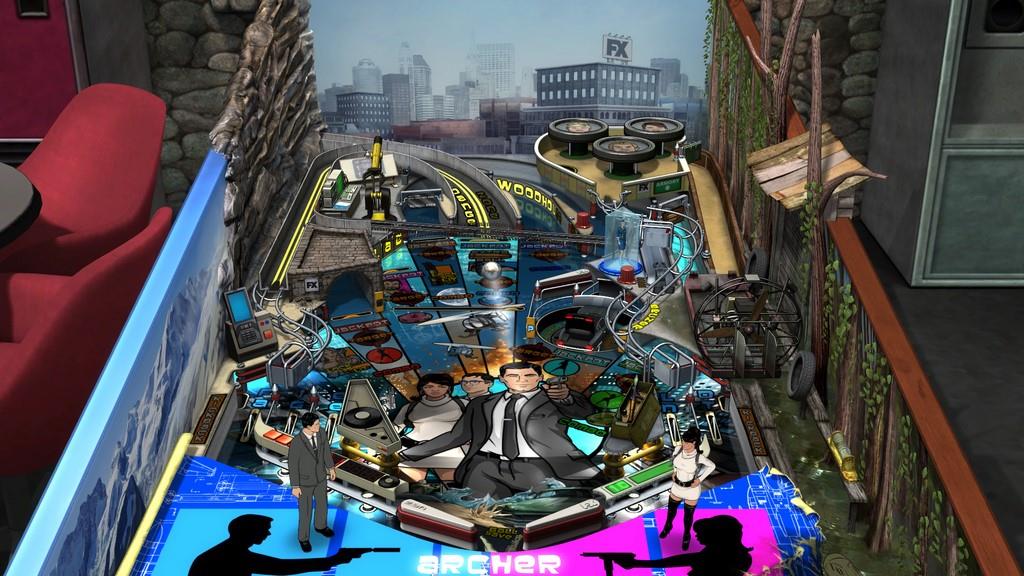 The word AWESOMENESS is spelled out by earning points on the other missions and modes of the table. As you hit certain milestones you will be awarded a letter towards your goal. One of the more unique features of the table is that you can earn credits which you can “expense" back to your agency. This allows you to purchase bonuses and features such as score multipliers, multiball options and jackpot increases. It’s a very unique concept and reminds me a bit of the Epic Quest table and its currency / equipment system.

While the table uses clips from the original show, just like all of the other tables, it did not feel as diverse to me. Perhaps it was just my personal luck during my time playing through it, but it became a little repetitive. It seems as though every other minute I was being reminded NOT to use the nerve gas or having to hear Archer answer his cell phone. Overall, this was a decent table, but arguably the weakest of this pack.

American Dad is perhaps the most colorful of all the tables and one of the most uniquely designed in this pack. This table employs a rail that flies under the bumpers on the bottom, which is a feature I always like.  You may be familiar with this if you played the Venom table from Marvel Pinball. Once again we're looking at a pretty wide open playing field with most of your targets in ramps being near the top of the field. 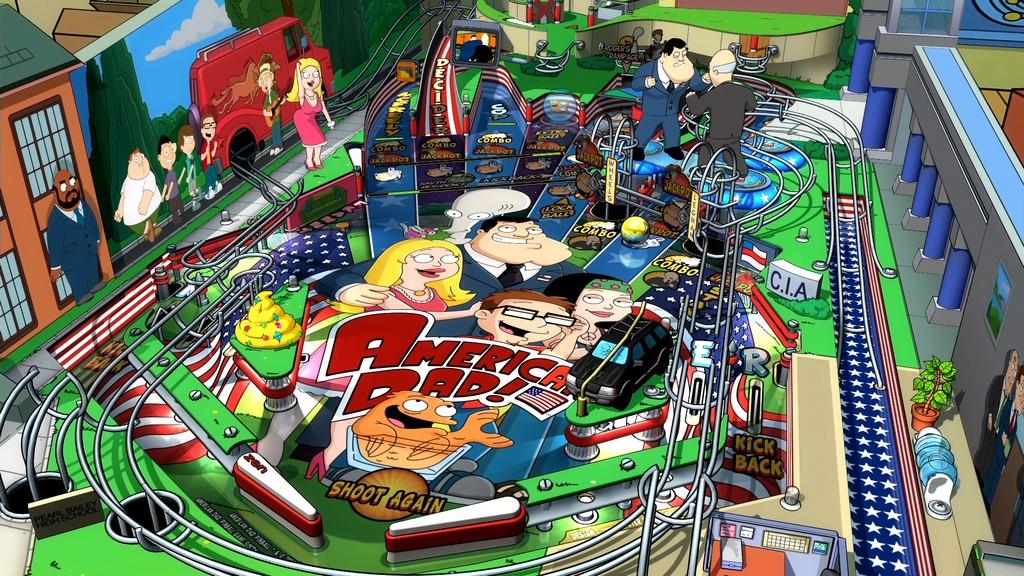 The unique feature for this table is the “threat level” that you have to deal with as President. There is a meter that represents the country's ongoing threat level and as you hit it, you will see it raise and lower. The higher the threat level goes, the less time that you will have to complete any missions. However, your scoring opportunities on those missions will be much higher. It becomes a risk and reward situation which can make things pretty interesting. Managing the threat level is definitely something that you'll need to master on this table.

This table makes the most use of the “video pinball” platform in terms of things that wouldn’t normally be doable on a real-life pinball machine. One mission, for example, has Francine and Stan ice skating across the playing field. You have to hit the ramps and targets without hitting and knocking down the skaters in order to earn your bonus score. There is also a "second screen” mission set in a shooting range where Stan gets to show off his skills with a gun. The table is a lot of fun but I think I might have enjoyed it more if I was more familiar with the show. This is one that I think American Dad fans will definitely appreciate.

Now we’re getting into a show that I love! Bob's Burger’s is also a very enjoyable table for both fans of the show and pinball in general. We’re looking at a relatively simple layout for the playing field as almost everything done on this table could be replicated in real life. The major gimmick here is that the table rotates between day and night. During the day, your restaurant is open for business in your missions and scoring opportunities all relate to serving customers food at the best burger joint in town. Once the sun sets and the moon rises, additional modes become available as Bob's Burgers closes the kids head out for trick or treating. Players can advance the time cycle by simply holding the plunger button for three seconds. While this is a relatively simple mechanic, it really adds variety to the table. 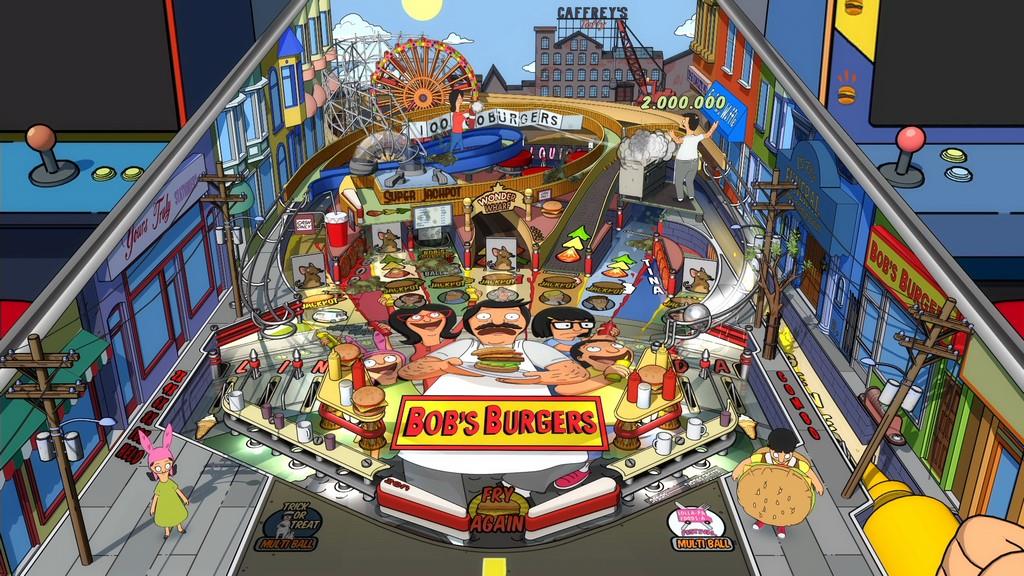 The playing field feels relatively short as a majority of it lies in winding ramps that take up most of the top half of the screen. You will spend most of your time trying to get your ball into this area and then anticipating where it will come out. One neat little feature that I like on this table is that while Bob's Burgers is open, if you become to frantic with your flippers and begin button mashing, Bob's grill will catch fire and inhibit your ability to serve orders, therefore slowing down your ability to score. Players have to hit specific ramps in order to put up the fire so that you may continue earning scores. This really pushes the player to be a little more methodical with their play compared to other tables. Thanks to these unique gameplay options and the fast pacing of the table, this quickly became one of my favorites.

Family Guy is the marquee title for this entire pack. It just so happens to be the best table of the bunch as well. This one has a nice open layout with a wide variety of ramps on the top half of the playing field. Each ramp represents a member of the Griffin family and every trip up one will award you a letter for their name. Spelling out a family member will launch the mission that is associated with that specific family member. Unlocking all of the family members modes in the same game will give you access to the table’s Wizard mode which is the secret to getting the highest score possible. 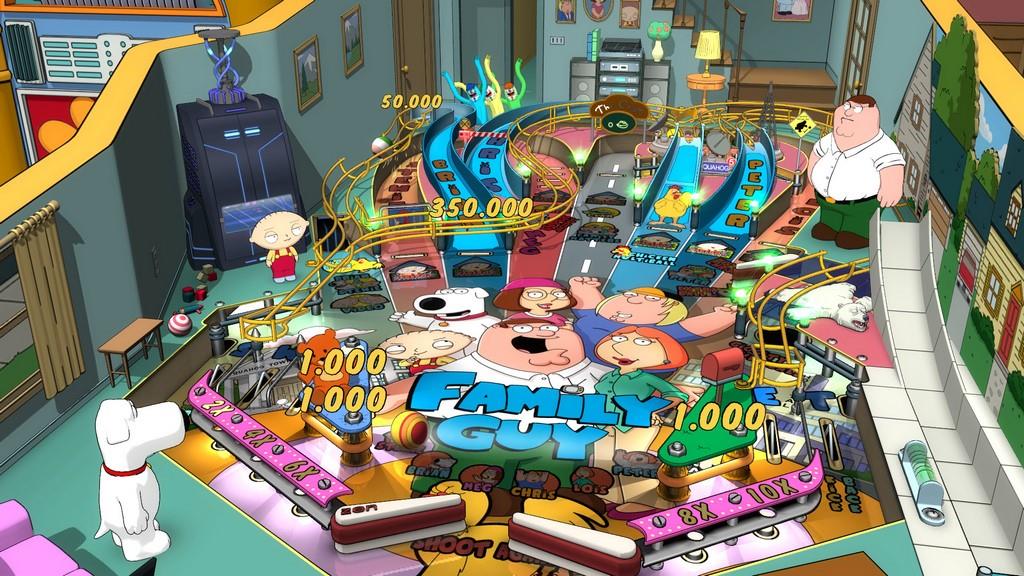 Accessing the Wizard mode also gives you a chance to take part in the new dual modes, which are special, themed missions based on popular pairings of characters from the show. Stewie & Brian have their own mission, as do Lois & Peter and Chris & Meg. The result is a ton of missions that are all relatively easy to trigger, which keeps the experience very fast paced and varied.

The thing that makes this table the most enjoyable of the bunch is its accessibility. There is very little explanation required for any of its modes and they are all easy to access. It's a fast moving table that has arguably the largest selection of sound bites of any Zen table I have seen. Fans will truly love hearing tons of references and inside jokes from the history of the show. This table alone is worth the price of admission for this entire pack.

As a whole, the Balls of Glory pack is extremely well put together. The three animated tables really embrace embrace the visual styles and sense of humor of their shows and bring them to life in a manner that suits both the source material and the pinball world. Unfortunately, the Archer table didn’t carry that same charm for me, but that could be because I wasn’t a huge fan of the show. The Family Guy table in particular seems to transcend the theme here of representing a show as it provides an excellent pinball experience for everyone, fan or not. This is definitely one you will want to add to your Pinball FX2 collection.

While the visual style of the cell-shaded tables took a little getting used to, the overall pinball experience proved to be fantastic. Fans of these shows will definitely enjoy seeing how Zen has adapted them to the pinball world, especially those who love Family Guy and Bob’s Burgers.