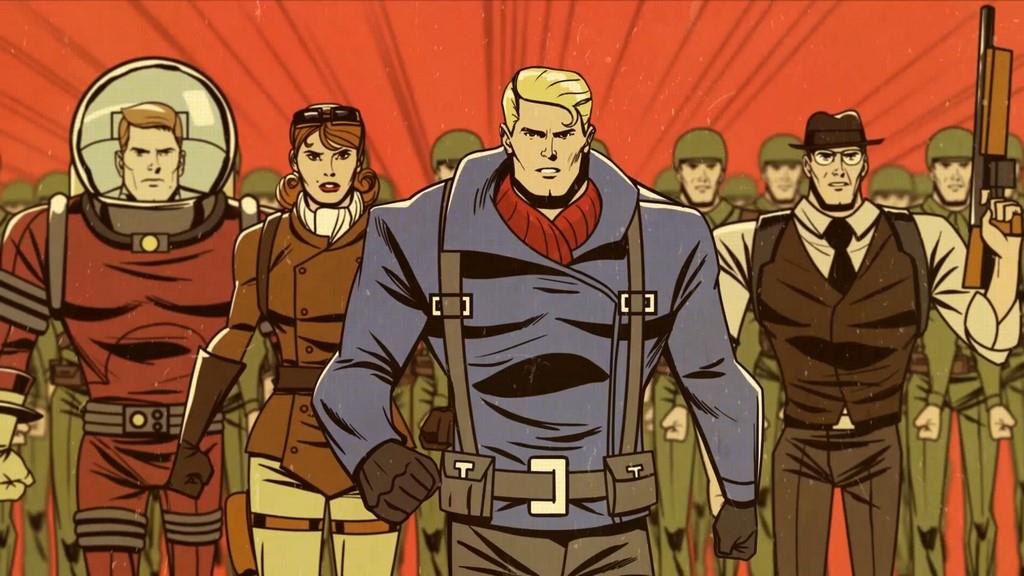 Written by Chapel Collins on 2/2/2016 for XBO
More On: Fortified

Sitting down to write this review, I racked my brain about the various pros and cons of Fortified. What I found was a notable lack of anything jumping out at me. After a while of not knowing exactly where to begin, I realized that there just isn't anything about Fortified that's noteworthy. It's difficult to say that without it coming across as a scathing insult, which isn't my intention. Nothing really bad stands out; Fortified isn't a bad game. But nothing great stands out either. I suppose if I'm going to follow my own pattern of thought, that means it isn't a great game either.

Fortified is a tower defense game with a pleasantly pulpy 1950's sci-fi coat of paint. You play as one of four appropriately archetypal sci-fi heroes who must protect rocket ships from green-and-steel Martian robots until they can escape after a set number of alien waves. To protect these ships, you build structures along enemy pathways, as well as engage in some third-person shooting with your character of choice. The third-person action is something I like about Fortified. It makes the game feel urgent and action packed, as you dart back and forth between different choke points, trying to keep enemies from getting through. Tower defense games have a tendency to get too comfortable; having the ability to fight enemies yourself keeps your head in the game. The characters don't have many differences between them, which is a shame, considering there are only four. I used the spaceman a lot, simply because he starts with a weapon I like.

Completing missions lets you upgrade and unlock new weapons, abilities, and structures. These structures vary slightly from character to character, although by the time the characters are maxed out, they more or less share the same armory. Some structures, like the automated machine gun turrets, are cheap and effective, designed for mass production to be plunked down at choke points. Others have specific effects against the enemies: they may freeze them, knock them down, or even set them on fire. Some are expensive and designed for a specific purpose, such as the anti-air flak cannons. It's up to you to figure out how you want to spend your resources, which increase each turn, in order to defend your ships from all potential threats. Standard tower defense stuff.

The problem is that a huge portion of the structures are seemingly useless. I played the entire game mainly using the same combination of three traps. This wasn't borne out of laziness or a lack of interest, either. I tried almost all of the available structures. I even respec'd a few times to sink upgrades into different items to try them out. The problem is that when I try other combos, the game gets too difficult. There's a weird balance struck by the systems at play in Fortified. It very rarely feels challenging; it's always too far one way or the other. Some strange gameplay decisions—like the ridiculously huge buffer zone around your rocket ships that don't allow you to place items close enough to defend them, or the incredibly long reload times for your weapons—that add what feels like a little bit of artificial difficulty. It's a pretty clunky game all around, even down to little things, like items you place sometimes facing the wrong direction. 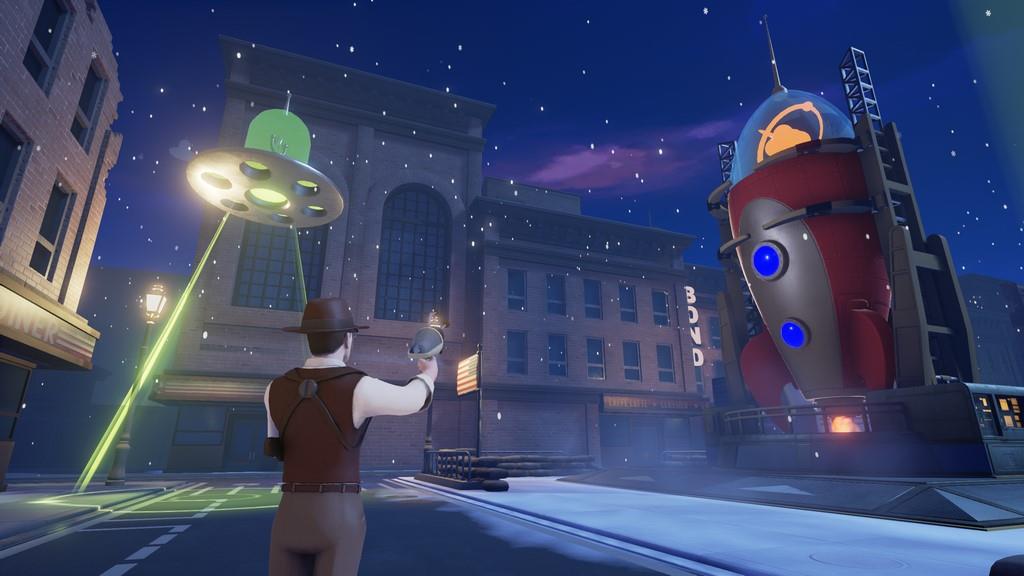 Something Fortified does well is its visuals and art design, even though the whole retro sci-fi thing is getting a bit tired. The art design is very fun, and all the Martian enemies look appropriately goofy and cliched. There is genuinely interesting design for some of the enemies, too. One in particular called the Annihilator stands out. It rolls into battle as a big, metallic sphere, and when it reaches your rocket, it unravels into a War of the Worlds-style tentacle robot. In its ball form, it can sometimes roll past defenses completely unharmed, providing one of the few situations when you actually have to switch up your tactics. The level designs, on the other hand, are pretty bland. They're almost all just a few streets on a city block, with some tiny variations in time of day and weather—none of which affects gameplay.

There is a multiplayer component to Fortified that lets you play through it with a team of four players. This is probably the ideal way to play it, although I was unable to find any multiplayer games when preparing this review. The way the game throws enemies down multiple pathways and gives each character (slightly) different abilities does seem to imply that it's more fun when you play with a team. Then again, most things are more fun with friends, so I don't know how much that really changes the issues I had with the game.

Fortified is fine. It's okay, for sure. None of the issues are game breaking, it's pleasant to look at, and it's got a nice sense of style. It just comes across as uninspired, even down to the retro sci-fi that's been done a million times. It does everything it sets out to do in a spectacularly okay fashion, but it doesn't do anything particularly well or try to innovate in any way. But if you really love tower defense, I don't see any reason why you wouldn't love Fortified.

A by-the-numbers tower defense game, Fortified is a campy fluff piece that will last you a few good, if a little mindless, hours. But you probably won't be driven to revisit it any time soon.