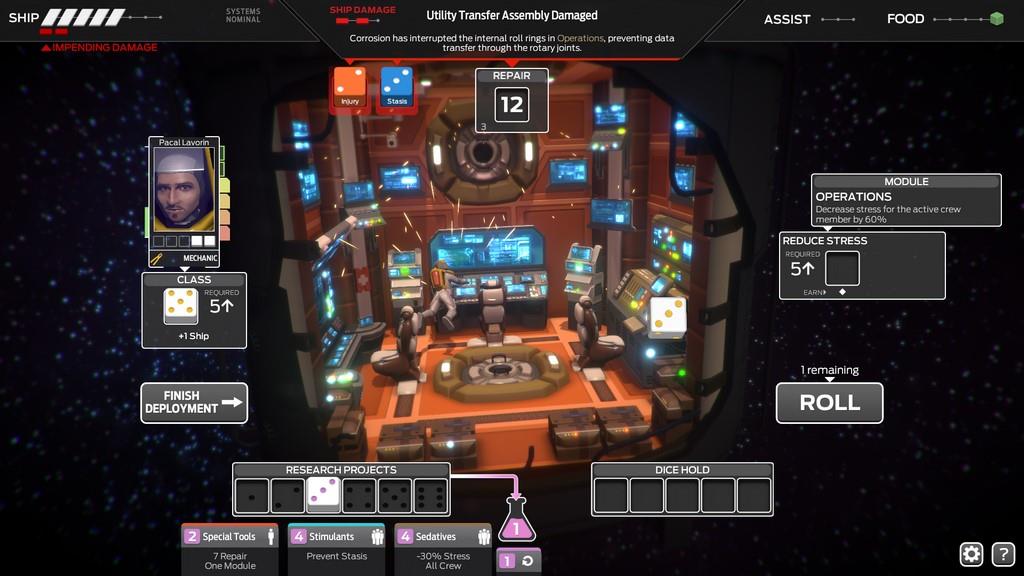 Tharsis is no joke. Are you laughing? Because Tharsis isn’t laughing.

Welcome aboard the Iktomi. The Iktomi is an international spacecraft on a strategic turn-based mission to Mars. The crew of the Iktomi was doing just fine. That is, until a cluster of micrometeoroids tore through the ship. When micrometeors travel 55,000 mph, they don’t have to be big to do a lot of damage. And so, one thing goes wrong onboard the Iktomi, and then another. A domino effect of problems begins to cascade. Now the crew is changing its mission parameters. Things have gone from "peachy keen" to "we’re all gonna die" in a matter of minutes. That may sound hopeless. It’s supposed to. You could survive, but you probably won’t. The odds aren’t looking good. And that’s actually the point.

Tharsis is a game predicated on failure. It wants you to lose. It needs you to. Time and time again, the dice prove they aren’t your friend. They’re just dice. As the random stack of problems come shuffling your way, one by one, it’ll often be too much to handle. As a player, you’ll embrace failure—or let it ruin you. I almost got myself fitted for a straight jacket, until one day I came to terms with Tharsis. Okay, Tharsis, I said: I’ll play your game. I’ll win by not letting the losses get to me. If I can do that, then I’ve already beat you, game.

At least that’s what I told myself. Things didn’t work out that way. But shifting gears, mentally, preserved my sanity. 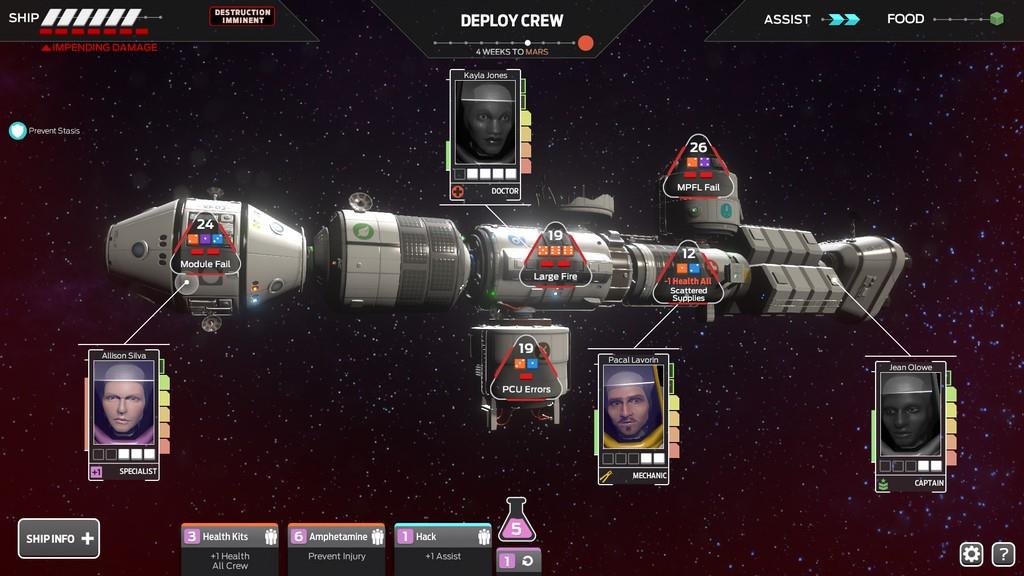 You start off every game with four surviving crewmembers. There’s also one dead crewmember in the Medical Bay. Randomly, and in varying degrees, the surviving crew is tired, injured, and stressed out. Your job is to distribute the crew throughout the Iktomi where they’ll do the most good. This is where the board game-like nature of Tharsis comes alive.

The ship looks like a big syringe traveling through black, starry space. There are seven still-intact modules: Flight Control, Greenhouse, Life Support, Operations, Medical Bay, Laboratory, and Maintenance. Seven sections—but only four crewmembers to keep the wheels from falling off the bus.

You’re still 10 weeks away from Mars. Each turn brings you one week closer. Closer to a mysterious signal emanating from the Tharsis region of Mars. What is sending the signal? Well, it doesn’t matter if you can’t keep this bucket of bolts from spilling out into dead space. One hundred percent of Tharsis puts you on the defensive and keeps you there. After a dozen games, my defensive posture looked like me curled up into a fetal position. After another dozen tries, I set my chin a little more defiantly, even if I was still sucking my thumb. But now, after 50-plus games, I’m like whatever, Tharsis: Come at me, bro. 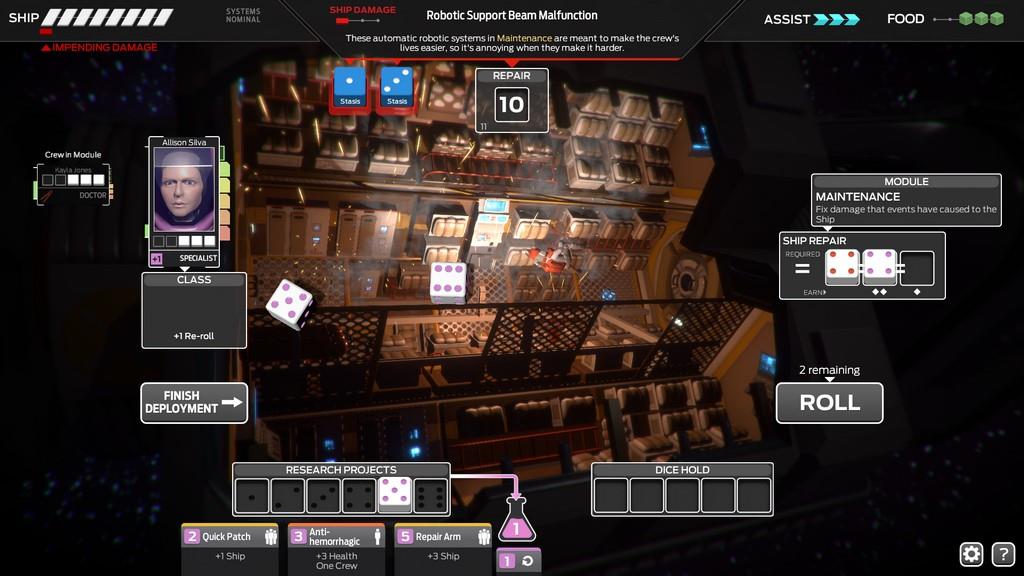 Depending on how well or poorly the cards are dealt to you, and depending on how the dice roll, a game of Tharsis lasts anywhere from five minutes to an hour. Again, it plays like a board game, and it’s not meant to take up more than a lunch break.

So, your first round, and each successive round, throws two or three new hazards your way. Right off the bat, one of them will be the meteoroid strike. It could hit anywhere (i.e. Operations or the Greenhouse) creating any type of hazard (i.e. -1 Health All or two points of damage to the Iktomi). It goes without saying that if your entire crew is killed off, or if the Iktomi runs out of hit points, the mission is a bust. No one’s coming back from the dead, and the Iktomi isn't getting to Mars. But here’s where it gets ugly.

You can eat dead crewmembers. 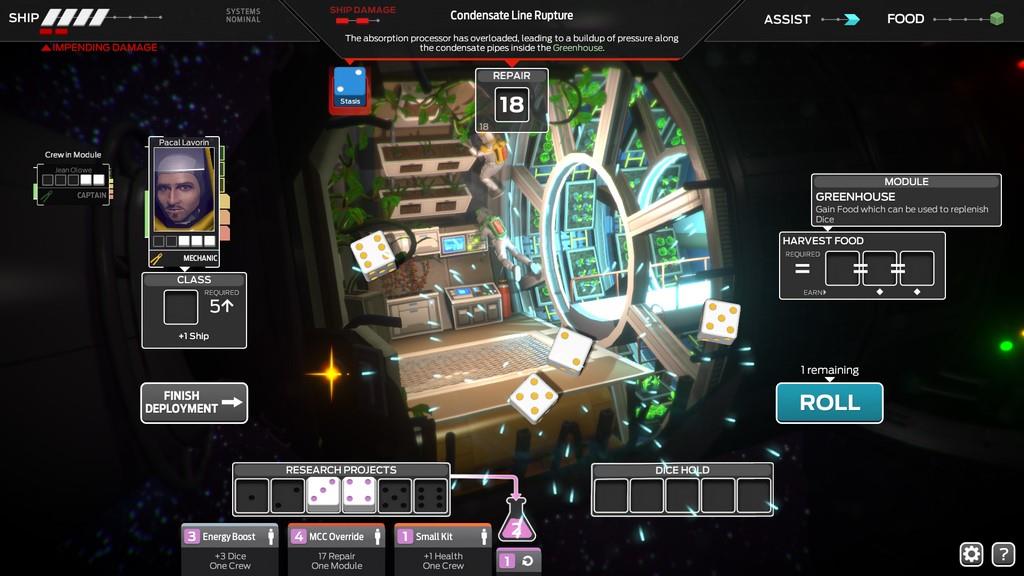 Cannibalism, folks. It just might be how you survive this whole trip. To explain, rolling dice reduces each crewmember’s total dice by one. To regain dice, you typically have to eat. So, you keep the Captain along for some sparse dice replenishment or hope a favorful side project comes along to give you some food. But otherwise, you're spending dice in the Greenhouse, or making steak tartare out of former comrades.

Apparently, eating people stresses out the crew, drops their max hit points, and turns their dice blood red. It’s a reminder of the humanity you’re sacrificing while trying to, well, save humanity. Thanks for the Catch-22, Tharsis. But hey: Whatever it takes, right? Daddy needs more dice. That biotube failure up in the Laboratory isn’t going to repair itself.

If having too few dice sounds dangerous, so can rolling too many dice, sometimes. I know. It’s crazy. The hazards slapped onto each module come with problems. Problems for your dice. One module might put all your 1’s and 2’s into stasis, freezing them, preventing you from rerolling for better numbers. Another hazard might make all 3’s void; as in, the 3’s you roll disappear from the board. That's the worst. Until you encounter a module that’s, say, got a big fire ripping through it, and any 4’s, 5’s, and 6’s you roll injure your crewmembers. These are only six-sided dice. The odds don’t look good. 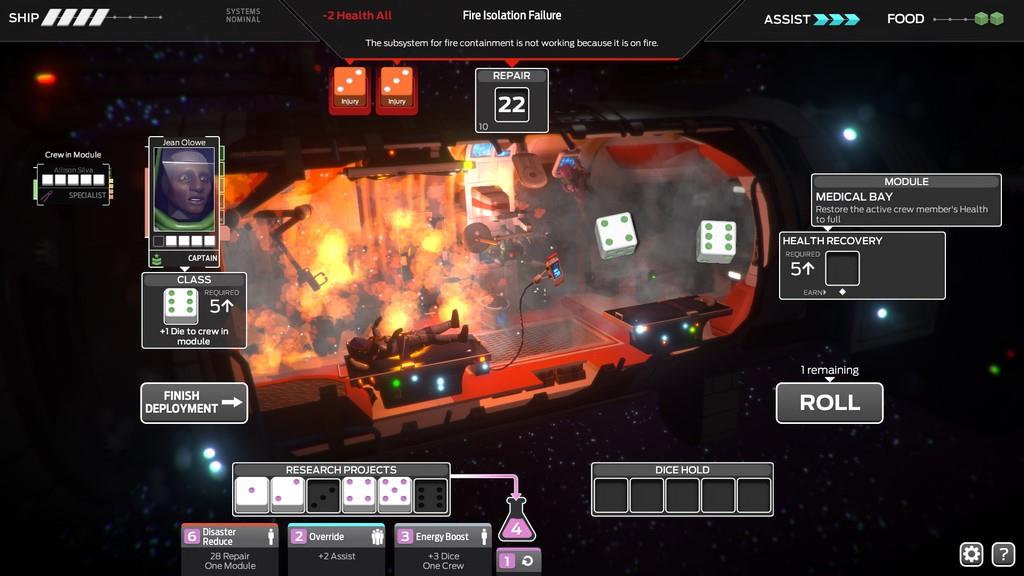 But that’s where your crewmembers come in. Each one has a specialty. The Mechanic, for instance, can apply a five or higher he’s rolled into giving +1 hit point to the ship. Or the doctor can apply a five or higher from what she’s rolled to give everyone in the module +1 health. Each crewmember is unique. You learn what works. Although the crew you assemble that finally makes it to Mars (yes, you too can make it to Mars one day) might not be the crack team you first imagined.

The crew can bump each other’s numbers up a bit, but each one of the ship’s modules also helps. Send someone down to Operations to take care of that hazard, then apply the leftover dice toward reducing their stress. Get someone to the Medical Bay ASAP so they can put out that fire, or put dice toward their own full health recovery. The risk/reward systems in Tharsis are manifold, and they’re omnipresent, and they’re as calloused as they are crucial. Every single die you roll is imbued with this risk/reward system. Do you put that fatty six you rolled toward repairs, bonuses, crewmember abilities, or research?

Ah, research. Here’s another set of random cards to invest dice in. Some research cards want two of your dice rolls in order to, say, call home and reduce the crew’s stress by 10 percent. Another card might want a six-die investment to instantly repair 28 points of damage to a single module. 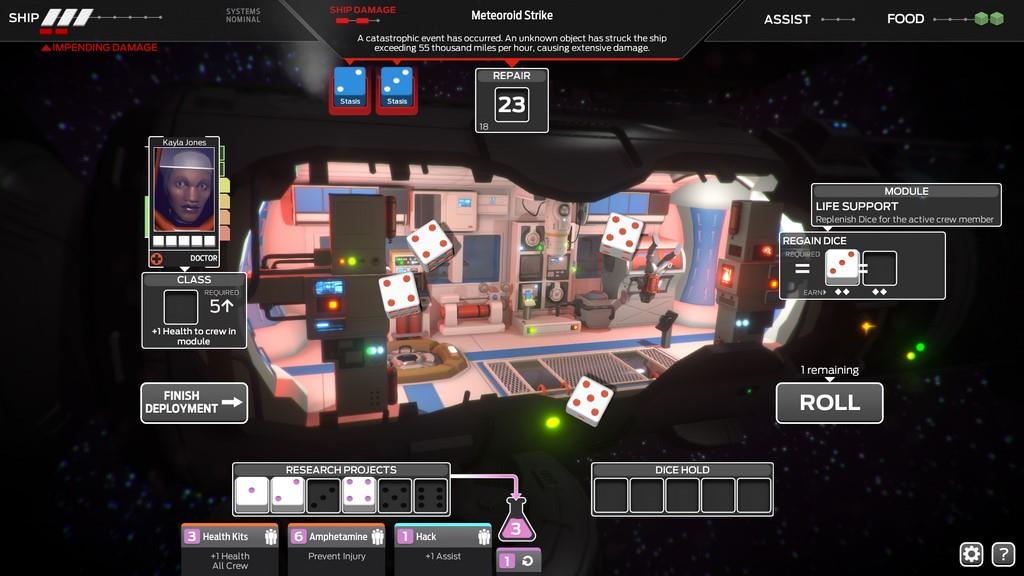 Tharsis is simple enough to suck you in quickly. It's also complex enough to give you a sense of discovery when you figure out where to put all your dice. It feels good when you bring a perfect pairing of last-minute research and Hail Mary dice rolls to pull off a nasty module repair. Feels like a much-needed win, small as it is. Like I mentioned, you’re not getting to Mars on most games. In fact, I’ve made it a few times, but my win percentage is sitting below 10 percent. I didn’t even make it to Mars my first 24 games. That’s when I was getting fitted for my white jacket and looking up white padded rooms on Airbnb.

Then that 25th game finally brought me Mars. But something in the story made me immediately try again. And again. Tharsis has multiple endings. Not that all of them make total sense. Each ending, though, takes into account how much of your crew survived the trip, and what, exactly, they did to survive that trip. That’s the meat and potatoes of Tharsis. Literally. Did you eat goods only grown in the Greenhouse? Did you eat nothing but succulent, delicious humans for breakfast? Did you eventually unlock the Cannibal character that’s suspiciously able to sacrifice one of their own hit points to provide a unit of non-human meat for the crew? How does the Cannibal even do that? I don’t want to know.

Learning the ins and out of the crew is rewarding. You have to replay Tharsis many, many times to unlock more than half the other crewmembers. The original four are great. But mixing and matching crewmembers is also a fun strategy. It's always so promising at the beginning of a game.

I have to mention the soundtrack, too. There’s a funky DJ behind all this death and dying. There are dance-worthy beats and head-bobbing disco rhythms as the Iktomi is destroyed. There are chill tracks, too. Tracks you wouldn’t find out of place on a Mass Effect map screen. It’s only an EP's worth of music, but each one is solid. I’ve never chair danced so much to my own ruin. It’s upbeat enough to be just a little bit ironic.

There are even tender moments you wouldn’t expect to find in the gameplay, all of your own making. Like when my Technician and Psychologist had to be left behind in Maintenance, making sure the Iktomi wouldn’t be destroyed while the Pilot and Commander launched for the Martian surface. Then the Psychologist spent his remaining dice letting them call home, and giving the Technician counseling before the end, lowering her stress levels. It was a nice, unscripted thing in a game full of horrifying random events.

Now, I’m not one to complain about minor bugs. I understand the nature of dice. But I swear. Rerolling dice is the most painful process in Tharsis. It felt like 50 percent of the time, rerolling dice simply brought up the exact same numbers again. I don’t need a one; so I reroll; and up comes one again. Okay, next chamber, I rolled two fives; I reroll; well whaddaya know, two fives. Amazing. The rest of the dice rolling felt good. But I’m suspicious of the random number generator on rerolls.

Tharsis gives out only small victories at first. Holding off death as long as possible becomes the goal. Not so much Mars. After dozens of straight losses, I accepted the fact that Mars wasn’t the mission. Fighting was the mission. Surviving in the face of imminent doom. Then I reached acceptance. Watching my little astronauts' radio images go black and white with static, then watching their bodies float limp and lifeless in the chamber…it was sometimes a relief. Like I thought to myself, You done good, little astronaut. You done good.

Then, one day, you'll reach Mars. You will. And you'll feel that elation. And you'll hear how it all ends. And then you'll immediately play again.

Tharsis, you hate me, but I like you. Your small and meticulous craftsmanship. Your board game sensibilities. Your dancefloor rhythms thumping out the soundtrack to my cyclical death. I couldn't stop myself from voyaging (and dying on the way) to Tharsis again and again.