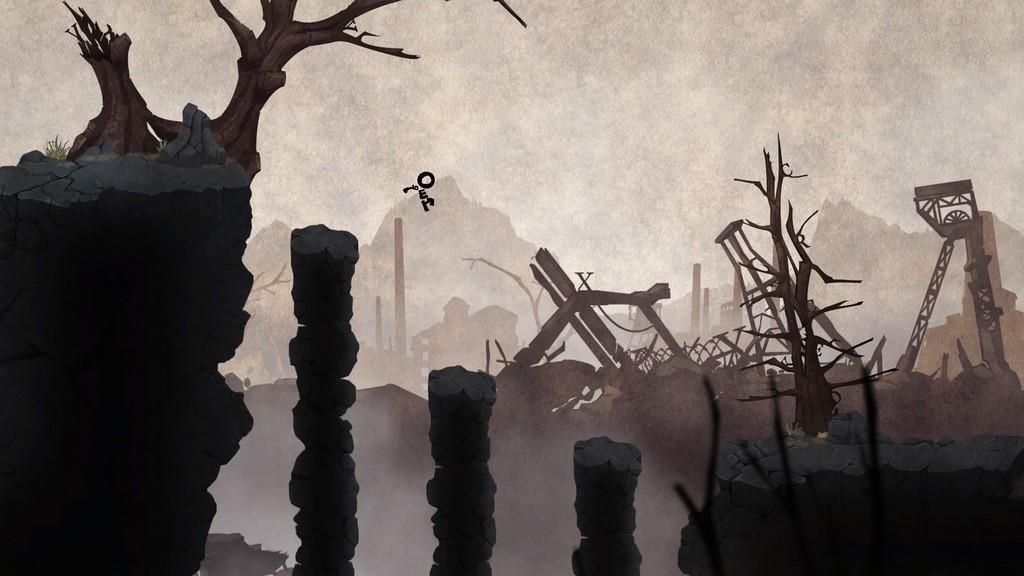 There’s sort of a glut of indie games these days, particularly 2D platformers. After indie game development got relatively cheap and fashionable, all sorts of little studios popped up to put their would-be masterpiece on various popular digital platforms. At best we’ve seen truly innovative concepts like The Swapper, or retro throwbacks like Not a Hero. But far more often we’ve had to slog through platformers based on gimmicks or worse, somebody’s poly-sci 101 hobbyhorse masquerading as a game. Steam is practically overflowing with those.

This is why it’s particularly interesting to play Typoman, and as a Wii U exclusive no less. This is a game with a genuinely brilliant core idea, something that works right at home in a 2D platformer, and with an evocative art style that is effective if not very original.

In Typoman, you play as a tiny creature comprised of the word HERO, morphed to take on an anthropomorphic shape. You start as a rolling letter “O” and pick up the rest of the pieces as you go along, in a very lonely and succinct tutorial. In fact everything important in the world of Typoman is made of letters. Machines, hazards, traps, creatures, structures, all of it “spelled” into the world, often in creative and deceptively simple shapes.

The rest of Typoman’s environment is a bombed-out ruin. Bleak, desolate and hostile in all sorts of expected and unexpected ways, it’s very reminiscent of This War of Mine and especially Limbo. One would be forgiven of thinking Typoman is just a bald-faced rip-off, but only a few minutes into the game it reveals its central mechanic and this is what sets it apart from its peers, aesthetic similarities notwithstanding. 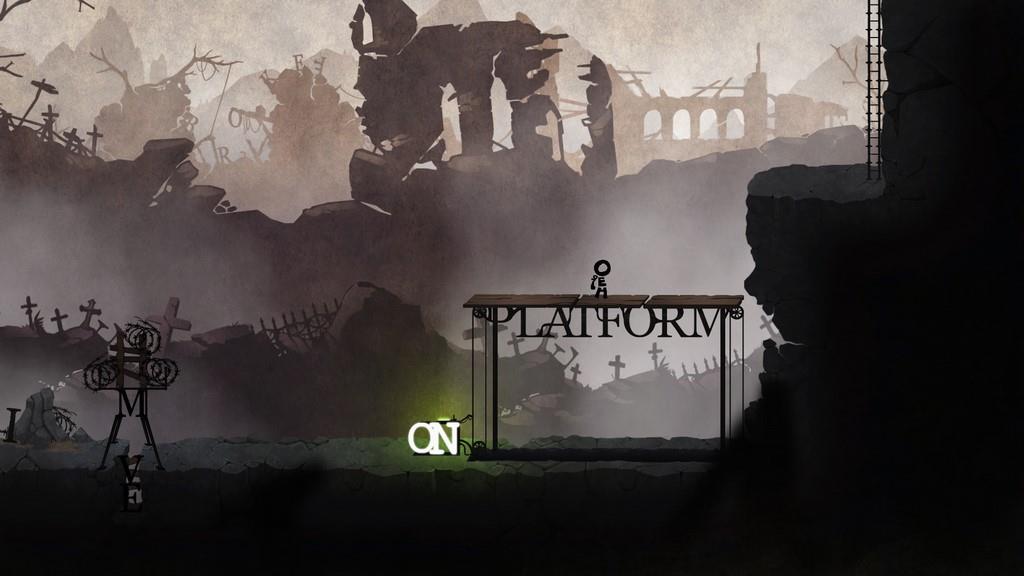 Those words and letters littering the environment aren’t just for show. You can re-arrange them to spell new words, and this is crucial to solving the game’s rather devious puzzles. The simplest example is putting an “O” and an “N” together to spell “ON,” which activates lifts, doors and other objects. You’ll often run into terrifying tentacles that suddenly rise up from pits and gobble you up; these creatures have the word “GORGE” written on them. Dropping a “D” into their mouth changes it to “GORGED,” and puts the monster into a food coma so you can pass unharmed.

These are relatively straightforward obstacles but Typoman gets much trickier within a level or two. By the second level I had to retrieve several letters from around the screen to spell “ESCAPE,” opening the path to freedom. All the while I had to avoid the ever-watching red eyes that zap away letters if you get too close; I noted that above these irritating enemies, the word “censor” is cleverly embossed.

Lest you think Typoman is just a series of clever puzzles, there are also some unforgiving platforming sections and action sequences that had me running for my life. At one point a monster created from the word “HATE” was chasing me through the bog-standard platformer crushy-ceilings. Naturally these traps were spelled from the word “CRUSH,” but when they lifted momentarily the letter “C” rose up and shortened the word to “RUSH,” indicating I should move my butt before I got squished. Sadly the first time I didn’t time it correctly. The HATE monster caught up and tore my little HERO’s head clean off in one shockingly brutal and abrupt move. Like Limbo, Typoman can be stark and merciless at times.

Unfortunately this means you’ll be dying quite a lot. Typoman’s difficulty doesn’t just come in timing or puzzles but in the classic platformer bane of trial and error. Maybe I’m just not that bright, but I’d usually get smashed, suffocated, electrified or dismembered multiple times before I figured out just what I was supposed to do. Luckily checkpoints are often and conveniently placed; I only ran into a couple that had me replaying an annoying sequence. Still, I can’t help but wonder if some more playtesting could have sharpened up a few puzzles. 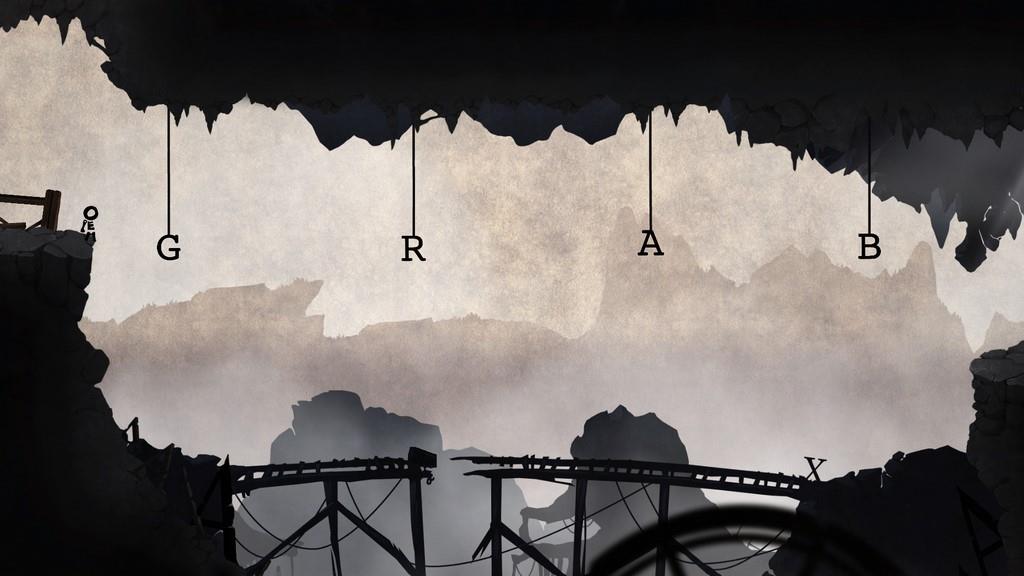 The controls are also a bit obstinate. It’s nowhere near as bad as Shiftlings, where I just never felt comfortable with the controls, but spelling out words in Typoman can be an arduous process. You can push, pick up and carry letters and also heave them short distances, but the physics make it difficult to do so with precision and your character is so small and weak to the point that it’s a detriment to efficient gameplay. Ironically this is one area where the GamePad touchscreen would have excelled, but it’s merely relegated to giving you puzzle hints. Don’t expect to be firing off vocabulary like it’s The Typing of the Dead in here.

Typoman can get a bit arduous, but don’t let that put you off of what is ultimately a very creative and rewarding puzzle-platformer. The cleverness and wordplay alone had me marveling; the way I could build positive words like “HOPE” and “FAITH” to generate a protective barrier, or how the standard platformer deadly pit spikes where actually a series of jagged letters “A”s spelling out a terrified “aaaaaAAAAA!” This game is as lovely as it is clever. It’s just a bit too clever for its own good at times and its puzzles can be frustrating.

That won’t diminish the sense of accomplishment you feel when you finally scrabble together the solution to a puzzle or make it past a harrowing gauntlet. I haven’t seen a game play with language and vocabulary like this before, and it might just give you a better appreciation for the malleability of the written English word. Given enough time and patience, Typoman will devil you, haunt you and lift you out of the dust. The Wii U has so few exclusive games, much less exclusive indie titles. Don’t let this one slip by.

Typoman is a challenging, if at times frustrating platformer with a great core concept. It relies too heavily on trial and error and the controls could be a bit tighter, but the puzzle design and stark, haunting aesthetic more than make up for any drawbacks.