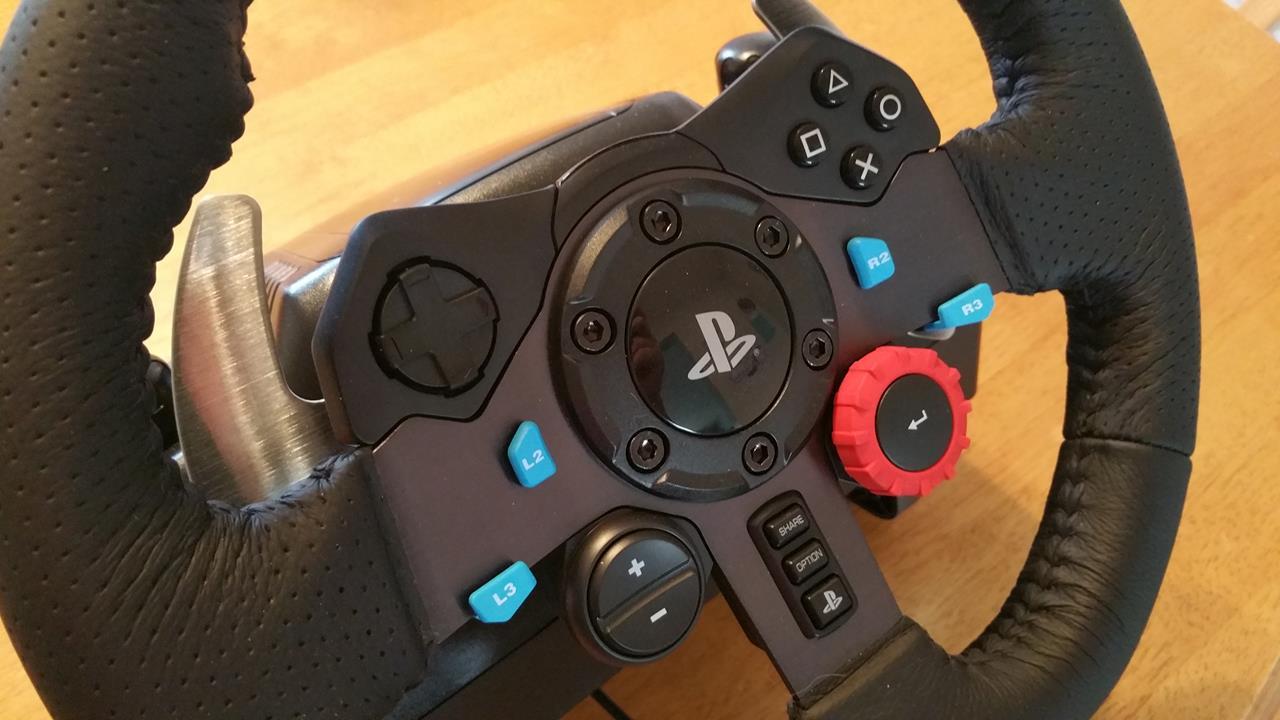 At E3 this year, I had my first glimpse at Logitech's latest racing wheel, the Logitech G29 Driving Force. The PlayStation/PC wheel was a follow up to their great G27, which I have used plenty of in various driving games on the PC. It’s a very solid wheel, which you can still pick up today. The problem for those with a console was you couldn’t use it. Now though, Logitech’s releasing a wheel for both the Xbox One and PlayStations with the G29 being a wheel that can work on the PlayStation 3, PlayStation 4, and PC.

The design of the G29 is pretty similar to the G27, with button placement changes. Since this is a PlayStation specific wheel, we have the PlayStation branded buttons along with the Share, Option, and PS button in the center bottom of the wheel. Compared to the G27, the G29 is a lot more busy on the wheel with a slew of buttons. That’s good and bad. I kind of liked the sparser configuration of the G27 for a PC wheel, but you can understand that Logitech had to put the buttons on the G29 since it’s a PlayStation branded peripheral.

Most of the buttons are easy to reach with the exceptions of the L2 and R2 buttons. The D-Pad and face buttons are easily accessible when driving. I did like the inclusion of the + and - button along with the big read dial. You can map those to media controls and they are a nice way to adjust the volume and switch musical tracks. All the buttons have a good response to them when pressed.

I don’t like how the share, option, and PlayStation button are really close together though. It’s pretty easy to mispress one when going for another, but the wheel face is pretty busy as it is so there’s probably not much room to place them anyways. Still, I think a better placement would be on the wheel housing itself. 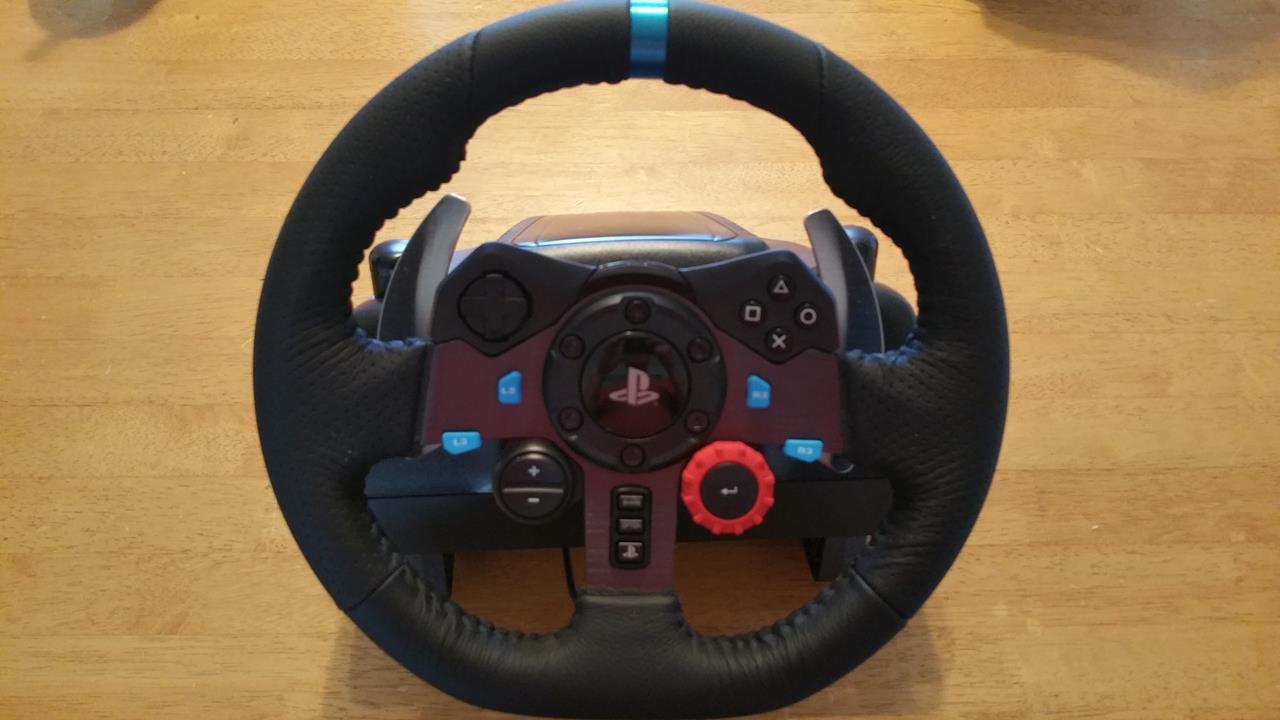 The overall physical design of the G29 hasn’t changed too much from the G27 and that wheel’s over four years old. It’s a solid design, but those with the G27 that want to see something a little different as far as aesthetics go will be a little disappointed.

I really like the feel of the pedals in the G29 and they are improved over the G27. The spring on the brake is stronger after a certain point giving you a more progressive feel rather than a linear feel when pushing. It’s more realistic and something that I really appreciate over the G27. The clutch and the gas pedal all feel solid. Like the G27, they are made of aluminum and respond well. Underneath the pedal base lies a carpet grip that can be extended. If you use the wheel on a carpeted surface, you can deploy this to keep the pedals from sliding. It works very well and it kept the base from moving when I used it on my carpet. The pedal facing positions can also be adjusted to the left or right just by changing some hex bolt positions. Serious racers will appreciate this level of adjustability. 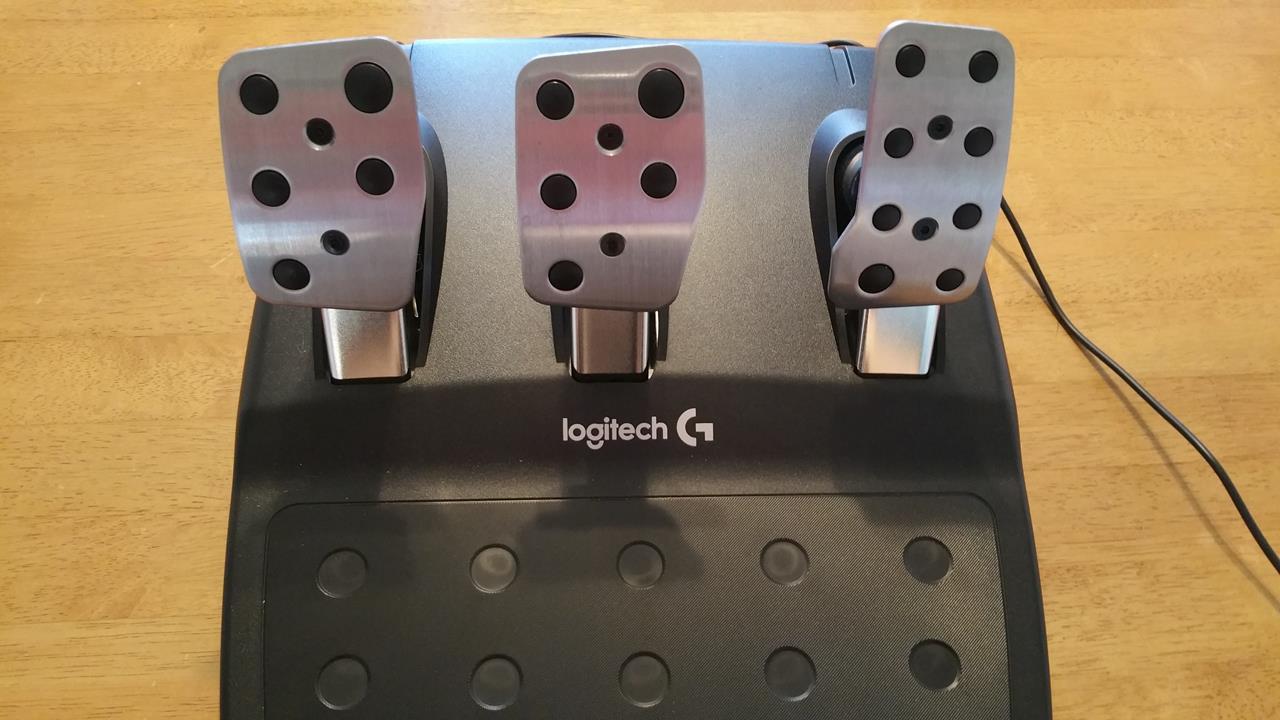 The shifter pedals are have a nice metal feel and a very satisfying click when pressed. They feel pretty much the same as the G27 to me, which felt pretty damn good already.

Above the center is a slew of lights known as shift lights. Only certain games support the LED’s but there is a third party program out there to make it compatible with more. Just like the G27, the lights on the G29 provide a nice visual indicator when supported.

Mounting the wheel to a table is the same as the G27. You have two clips underneath that get loosened or tightened by two knobs on the top. Once you have the clips grip the surface, you can push down the knobs to lock them in place. There are also holes if you want to do a permanent mount as well. 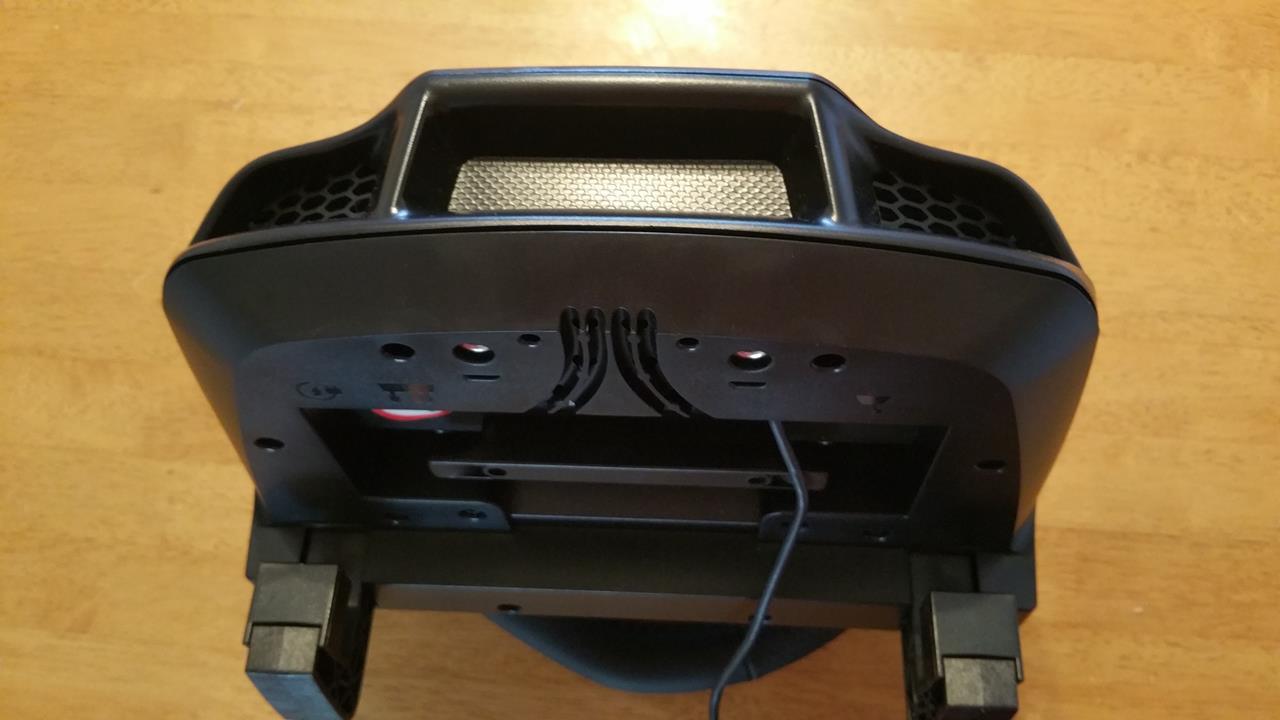 The Logitech G29 wheel has upgraded internals for handling force feedback over the G27. It’s suppose to be more accurate, and it might be. It’s hard to tell, but talking with a few other owners of the wheel, they seem to think so. I couldn’t tell, but not comparing to the G27, the wheel’s force feedback very nice. From the subtle bumps of a rocky road to the large reactions when crashing, the force feedback worked really, really well.

Missing from the G29 is the shifter module. With the G27, it was included but Logitech decided to sell this unit separately. If you have the G27, the shifter from that product will work with the G29 except for the buttons. It’ll cost you $60, but if you really want to go all out, it’s something you’ll definitely want to consider. It’s just too bad it’s not now included in the package. 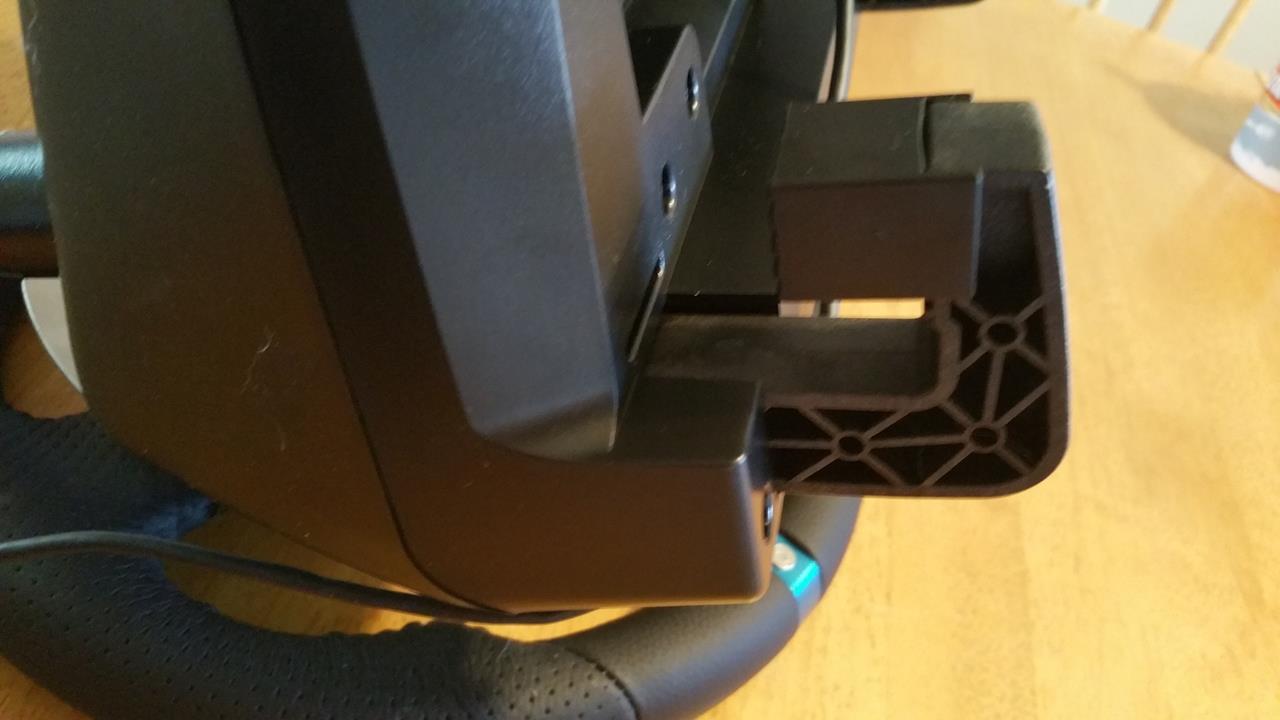 As mentioned earlier, the wheel will work on the Sony consoles or the PC. To play on the PlayStation 4 or the PlayStation 3, you just have to plug it into an available USB port and fire up a supported game. There’s a switch on the wheel if for PS3 and PS4/PC operation.

You’ll also need an extra step on the PC by installing the latest Logitech software. The software does a wonderful job in letting you remap any button on the G29. It’s intuitive and visually easy on the eyes. Setup for a particular game is easy with profiles.

On the PlayStation 4, I played Driveclub while on the PC, Project Cars and Euro Truck Simulator 2 were my testing programs. The Logitech G29 Driving Force allowed for an incredibly enjoyable experience on both the PlayStation 4 and PC in their respective games. On the PC especially, I played Project Cars and Euro Truck Simulator 2 with the Oculus Rift. Combining with the impressive performance of the G29 wheel, the combination really generated an immersive experience. It goes without saying that playing these games with the G29 over a gamepad offers up a lot better control as well as just being a lot more fun. The wheel performed admirably, and having used the G27 a lot, I can say the G29 matches and exceeds it in certain areas. 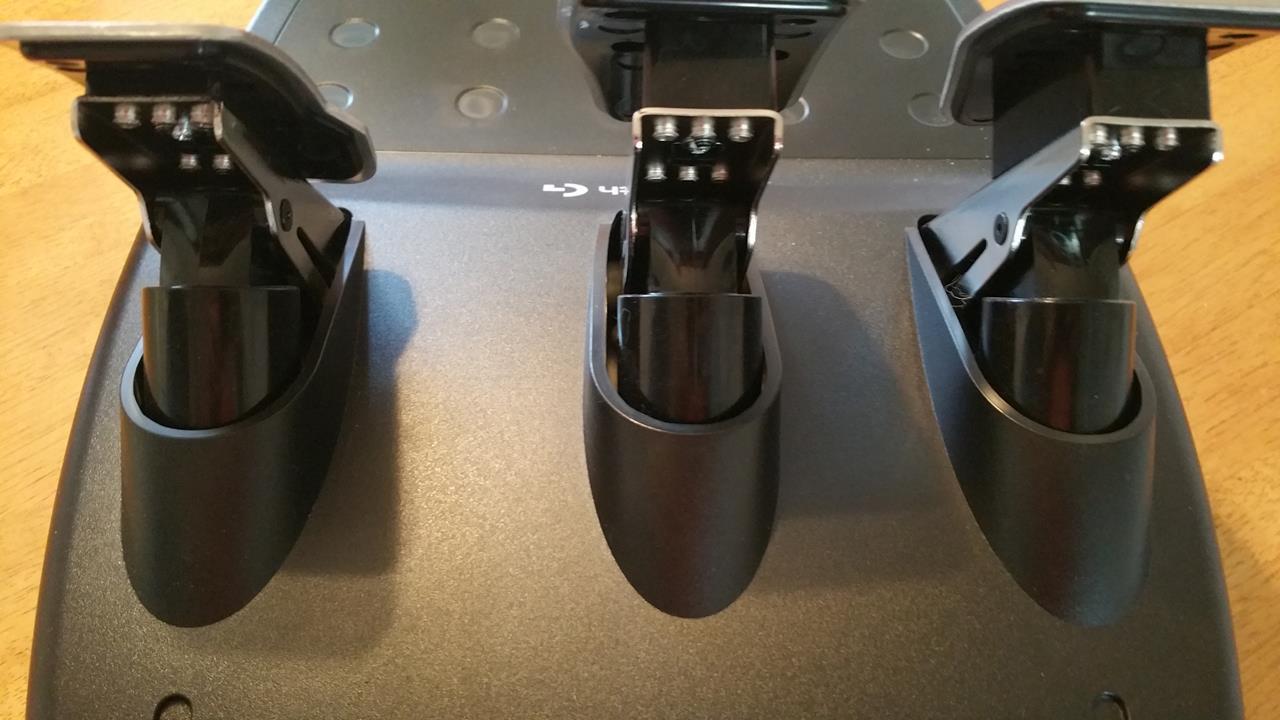 Now comes the bad news. The G29 Driving Force costs $399.99. That’s a pretty penny. Compared to a G27, which you can pick up $299 and that includes a shifter, it’s hard to recommend for those who want to use it for the PC. Now, if you need a wheel for the PlayStation 3 or PlayStation 4, then it’s a no brainer if you want one of the best wheels you can buy for the console. If you also have a PC, then this is the wheel to get. But if you are only using a wheel for the PC, the best bang for your buck is still the Logitech G27.

So it really comes down to what systems you want to get a driving wheel for. Overall though, the Logitech G29 Driving Force is an incredibly well built and solid racing wheel. The force feedback is strong and responsive, the leather stitched wheel feels great in your hand, and the pedals are a nice improvement. It’s pretty expensive, but if you’re a driving enthusiast, you’ll enjoy all the features it has. If you have the G27 that’s still working well for your PC, I say stick with that rather than upgrade, Otherwise, those that need a high class wheel and want it to work on a few different systems should definitely consider the G29.

If you already have the G27 for the PC, the update won't be worth it. For those looking for a new wheel and wanting to also use it with the PlayStation, this is the one to get. It's a solid built, great performing wheel.