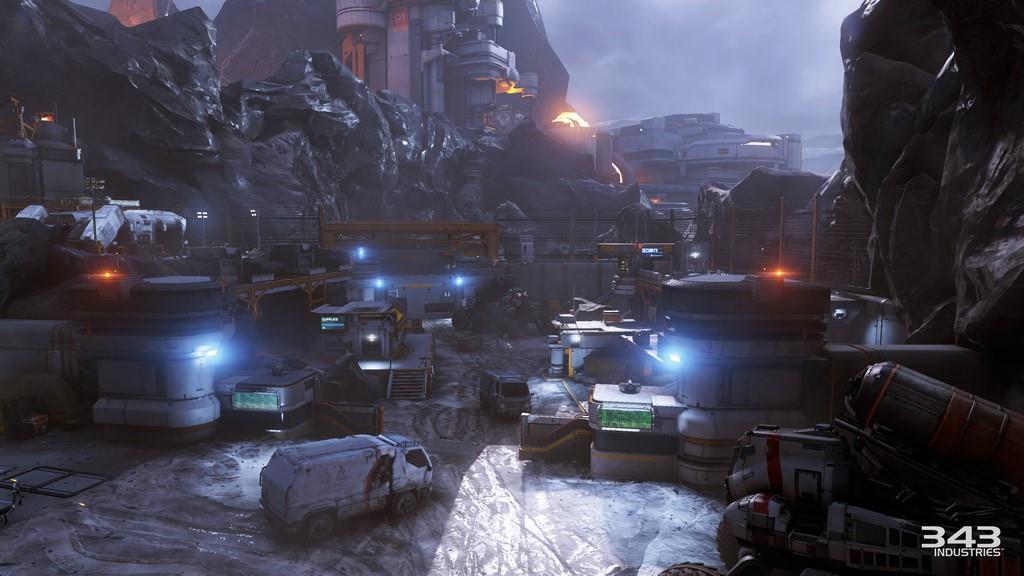 This review will contain some light spoilers, but there's nothing that ruins the ending of the game or any of the major plot points from the last two-thirds of the story.

Halo 5 is the third game with 343 Industries at the helm. You can tell the development team is finally getting its hands around the franchise. Halo 4 was a solid effort that introduced a few new things, but Halo 5 feels like a much different, and much better, game than its predecessor, both in terms of pacing and execution.

The game opens with Locke and Master Chief going about the business of fighting the Covenant. The Covenant are in an all-out civil war with the UNSC backing the Arbiter's forces as they try to wrest control from Jul 'Mdama. Halo 5 assumes you are familiar with what happened in previous games. There is no real introduction or background to give you context for these events. Something to recap people on events from previous games would have been appreciated, but then again, we live in a world with Google and videos and Wikis to get up to speed on all that has happened previously.

Locke is a former ONI spy who has was recently retconned into the Halo universe. Locke heads up Fireteam Osisris which is filled out by three other Spartans, including former ODST soldier Buck (voiced by Nathan Fillion). Locke is all business, and he's a character that I eventually warmed up to once his motivations and drive were made clear. He contrasts very well with Buck who is a bit more fun and games. To be honest, I called Buck "Mal" most of the game because this is clearly Nathan Fillion channeling his character from the Firefly TV series.

Master Chief is leading Blue Team, which is composed of himself and three other Spartans. I'm not sure who is in charge of naming Spartan teams, but Master Chief got the short end of the stick on this one, as Blue Team is not nearly as cool of a name as Fireteam Osiris. Naming schemes aside, Master Chief is starting to show some signs of strain. He has dealt with the loss of Cortana by burying himself in his work.

Between the loss of Cortana and the stress of constantly going on missions, this gives Master Chief a much different feel than in previous games. It's odd to take Master Chief out on a mission without Cortana there to guide him. That lack of companionship doesn't really manifest itself in the gameplay, but you can see it a bit during the cutscenes. This isn't the invulnerable Master Chief that saved the planet in Halo 3. This is someone who is just soldiering on, dealing with loss, and trying to just put one foot in front of the other. 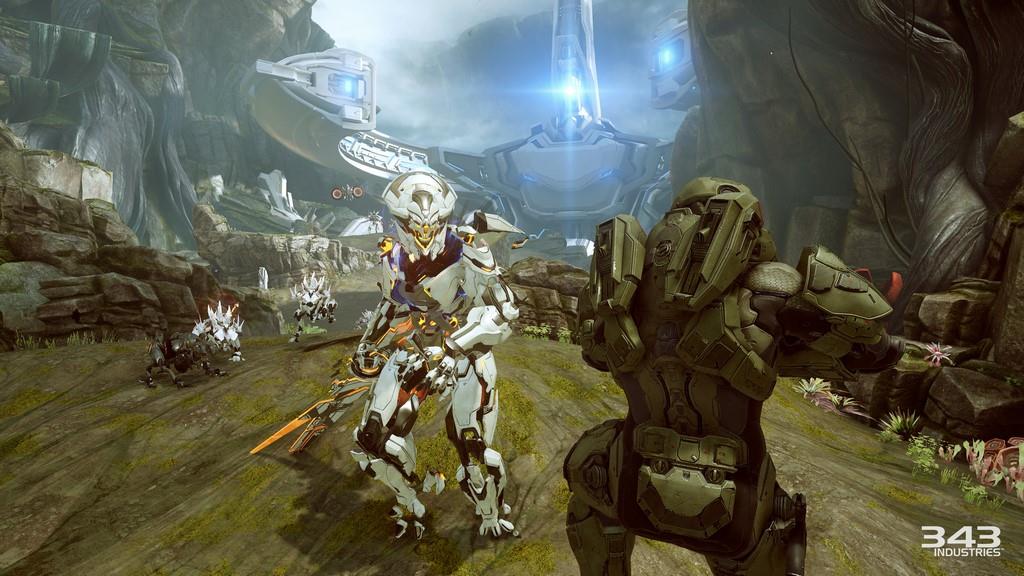 It turns out that Cortana didn't actually die at the end of Halo 4 (try to act surprised). Rather, she escaped using a backdoor she discovered while helping Chief defeat the Diadact. This backdoor allowed Cortana to discover a cure for the rampancy that was driving her insane, as well find a way to bring peace to the universe.

This peace will be created by Cortana assuming the Mantle of Responsibility, something that has been a part of Halo lore for a while. It's worth noting that this peace should really have quotation marks around it, as the mantle gives Cortana the ability to control giant Guardians which have been hidden in various planets around the universe, waiting to be activated.

The problem is that most of the Guardians have been buried on populated planets. Waking them up causes large amounts of death and destruction. The Guardians also emit electronic jamming pulses as they wake up, which doesn't help matters much. 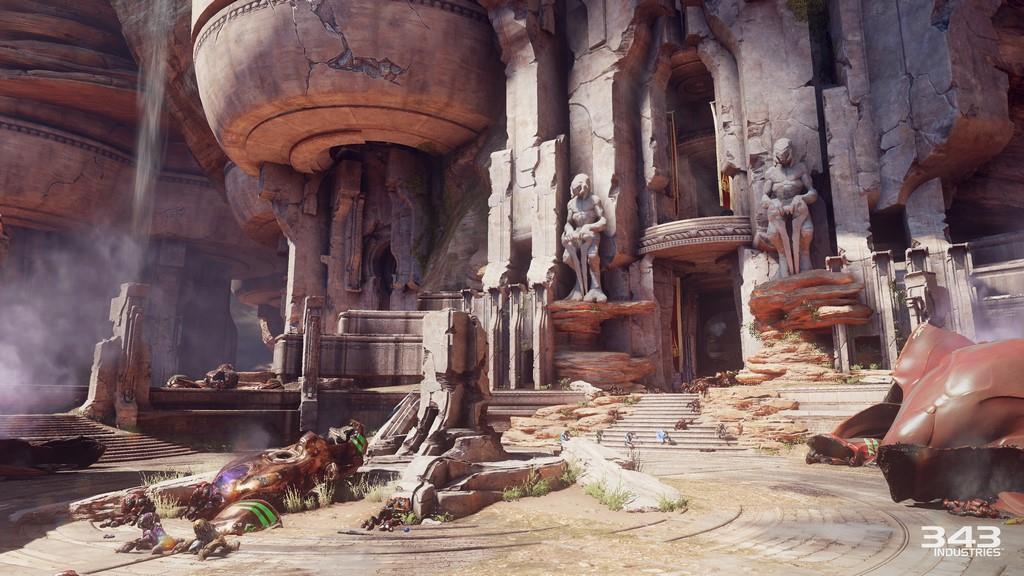 These Guardians can slipstream to any place in the universe almost instantly, and can snuff out any species that doesn't bend a knee to Cortana and how she thinks the universe should be run. It's in this context that Master Chief much try to reach Cortana and stop her. Since he doesn't have time to tell the USNC what's going on, they assume he's gone rogue. They send Locke and his team out to capture him.

The single-player campaign stretches out over 15 missions and took me around eight hours to complete on normal difficulty. If you spend time searching for everything and playing on a harder difficulty, I could see that number climbing by four to five hours. As you play through the game, you'll alternate between playing Locke and Master Chief, and you'll have your fire team with you as you go. 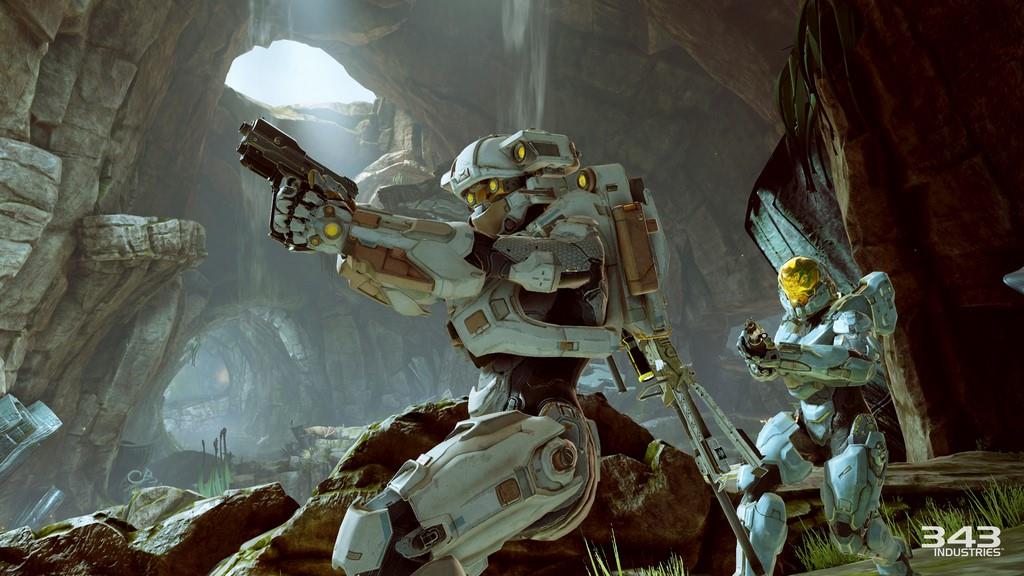 The team aspect is important, as members of your team can revive you in most cases if you're killed by enemy fire. If you're vaporized by an enemy, crushed by something, or if your team is wiped out, then you'll have to restart from your last save point. Save points are abundant and I never felt like dying set me back too far.

The AI teammates (which can be replaced by real humans when playing co-op) are mostly competent. They do listen to your orders when they make sense—and ignore them when they don’t. Having them attack a turret head on is a quick way to learn the limits of your team's loyalty. They do take cover, attack smartly, and will scavenge weapons and vehicles very well. However, they tend to have the occasional issue driving vehicles, which can lead to some frustrating/entertaining situations, like this one:

Your AI teammates are also susceptible to friendly fire, so you want to be careful with where you aim any heavy-duty weapons. They will re-spawn if they are killed. But you will lose the benefit of their services if you accidentally run over them with the Scorpion Tank or melt them with the incinerator cannon.

The pacing is solid throughout. It follows the standard Halo MO of mixing lots of ground combat with the occasional vehicle level. 343 even added some non-combat missions where you can walk around and just explore an area. There have been similar missions in previous games, but the ones in Halo 5 feel larger and really add more flavor. The plot is definitely a step up from Halo 4, and I enjoyed the game immensely, but the ending is going to polarize people a bit. Not like Mass Effect 3, but keep in mind that Halo 5 is the second part of a trilogy, so don't expect complete closure when the credits role.

I was also impressed that Halo 5 allows you to jump in from a mid-chapter starting point, so if you have to stop playing during a chapter, you aren't forced to play the entire thing over again. This might sounds like a small thing, but this was a huge benefit to players who have dogs, children, and other distractions that can interrupt a playing session. 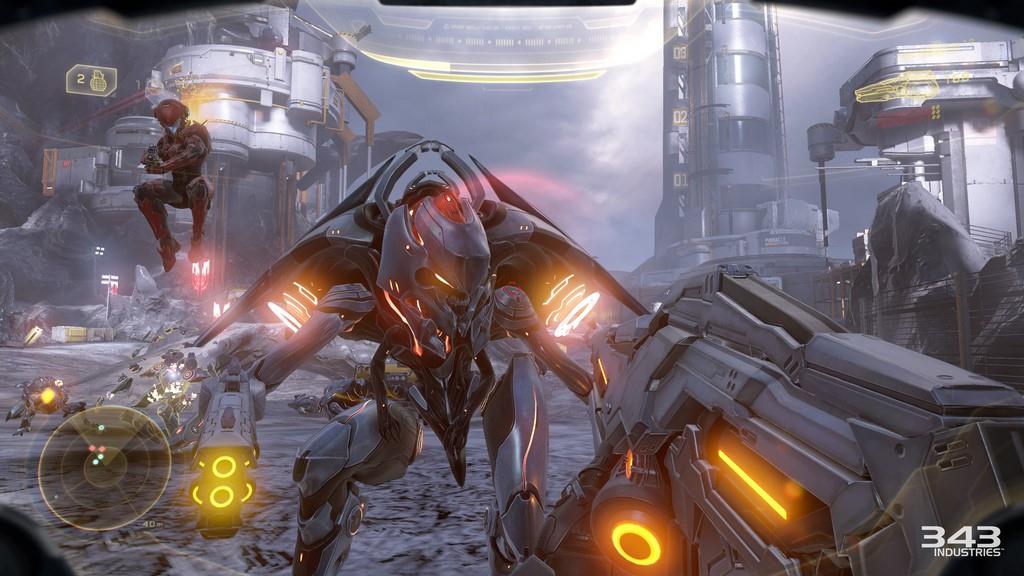 The most impressive thing about the Halo 5 campaign, though, is the silky smooth 60 frames-per-second that the game maintains for the entire campaign. The actual resolution might dip behind the scenes, but I never saw the frame rate drop even during heavy combat. I was constantly impressed at how good this felt. I think it might be something that ruins me for other FPS games going forward. There's solid pacing and action for the most part—with some minor hitches here and there, especially toward the end.

All of the familiar weapons from previous Halo games are present. All have received tweaks, both in terms of how they look and function, and all of them feel really good. Except for the USNC shotgun and the Covenant Carbine, which both feel a bit nerfed. 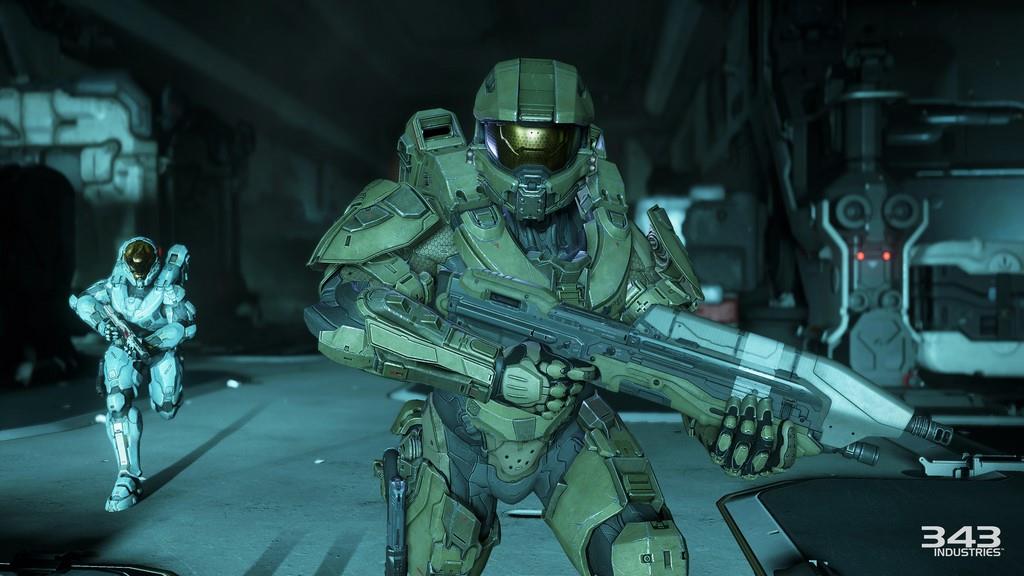 The Spartans also get a host of new abilities in Halo 5, including:

- Thrusters — A short thruster boost which can shoot you forward or side to side. Can be used in conjunction with sprinting and jumping to get to new areas.
- Ground Pound — When you jump from a high spot, you can hit the RB to charge a ground-pound attack that can strike multiple people below you.
- Sprint attack — A super powerful melee attack that can be unleashed when you are running at an opponent.

These new abilities take some getting used to, but once you remember to use them, they soon become indispensable. Another change is that every weapon in the game has a secondary zoom mode. The twist is that when you take damage, it pulls you out of zoom. This is a nice compromise that should help keep snipers from dominating multiplayer. 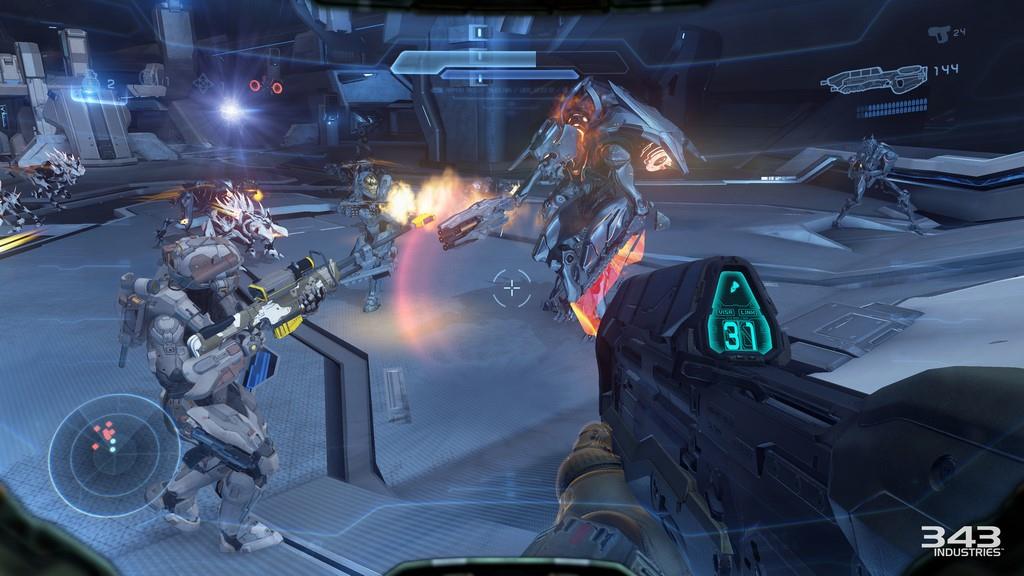 On the topic of multiplayer I did get a few matches of the Arena and Warzone in against some others with early access to the game. The two impressions I came away from in multiplayer were that 1) if you weren't any good at previous Halo multiplayer games, then you're not going to have much better luck with Halo 5; and 2) was that the Warzone mode has a lot of potential. In Warzone, two teams of nine to 12 people fight to control checkpoints on a map. If one team gains control of all three points, then they can defeat the other team by destroying the core of their base. What makes this mode interesting is that the game will randomly drop in Promethean and Covenant troops to mix things up a bit. I'll be diving more into the multiplayer mode after launch, so check back later for updated impressions of the multiplayer portion of the game.

With Halo 5, it really feels like 343 has taken the reins of the Halo franchise. Halo 5 is also a dazzling display of next-generation gaming, featuring silky-smooth framerate amongst some amazing environments. The story, while a smidge formulaic, is fairly solid and expands the Halo universe.

It's not perfect, but this might be the best single-player Halo campaign ever written.  343 finally feels like it's taking the franchise in a new direction—and it's a good one. Just don't expect closure.