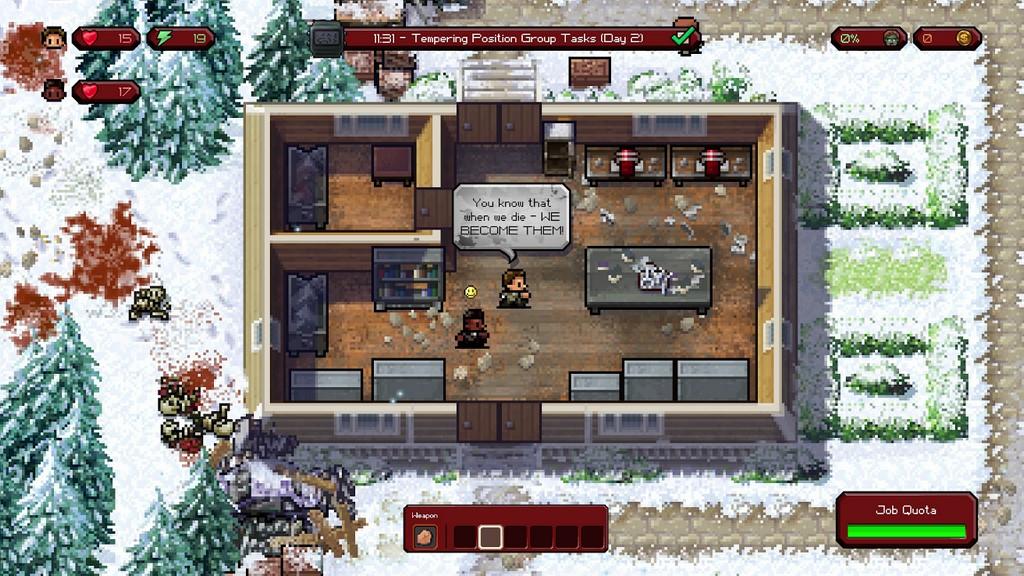 The Escapists: The Walking Dead

Written by Chapel Collins on 11/4/2015 for XBO
More On: The Escapists: The Walking Dead

Last year's The Escapists was a really interesting idea that had a lot of great ideas and potential, but the execution just didn't quite make the cut. The methodical, long term planning required to escape from prison was fun, and very satisfying when it went the way you wanted it to. Too often, however, it ended up being either too drawn out or too frustrating. The random nature of item finds and cell checks added an antagonistic element that was beyond the player's control, and that's never a good thing in a game. In The Escapists: The Walking Dead, a lot of these problems are fixed. Ironically, by taking away the central element of being in prison, the rest of the game mechanics are really given the freedom, if you will, to shine.

In The Escapists: The Walking Dead, you play as the main character of the series, Rick Grimes. You are in charge of the group of survivors, and it's up to you to accomplish various objectives in each level to keep everyone safe and, eventually, move on to the next area. Rather than scrounging around inmate's cells for supplies, TWD will see you journeying out into the apocalyptic wastelands, fighting or carefully avoiding crowds of Walkers to get what you need. You'll have to find time for exploration in between your survival routines, like washing bloody clothes and cooking food for your group. If you shirk your responsibilities for too long, your safe house will start to fall apart and the zombies will begin to move in. It's up to you to manage your time and resources to keep everyone safe while also moving things along.

Despite the huge shift in setting, not everything has changed. Many of the good things about the original Escapists have remained. The presentation is mostly the same, though with a little story added to give things a bit more purpose. I believe it follows the story of the comics rather than the show, but I am admittedly not a big follower of the Walking Dead franchise, so I'm not entirely sure. It's not terribly important anyway, as the story is reduced to nothing more than a few introductory slides before each of the five levels. You'll see yourself setting up camp in several of the iconic locations from the series, like the Greene family farm and the town of Woodbury. You'll also be working together with the characters from the comics, but the amount of actual characterization doesn't surpass an 8-bit sprite that looks kind of like the character. In fact, the game is pretty liberal with the source material. Aside from the locations and character names, there isn't much that specifies this game as part of The Walking Dead in particular, and not just a generic zombie romp. It's not a criticism as much as an observation; it doesn't really affect the game, it just seems strange to have a license as huge as The Walking Dead and utilize it so little. 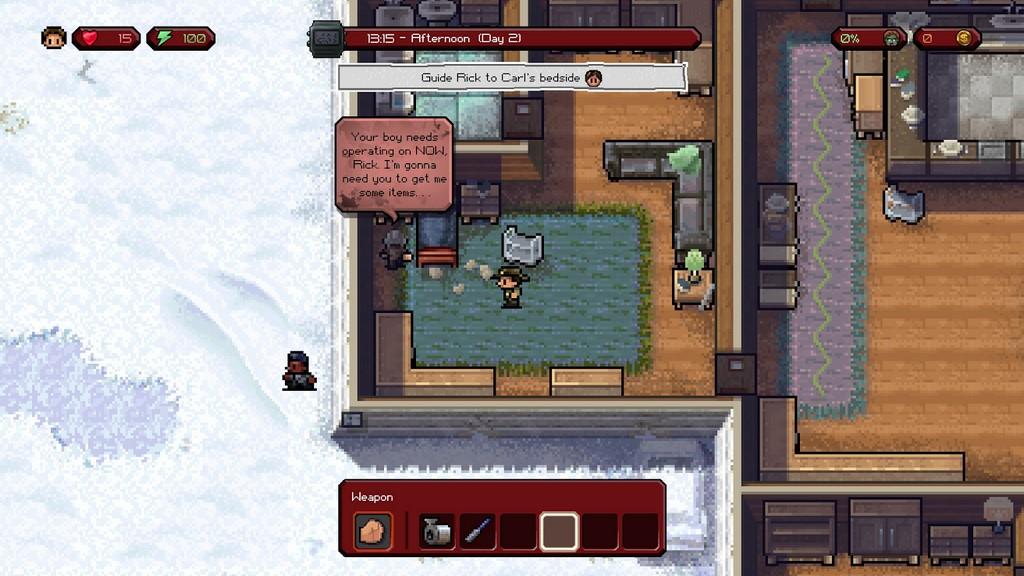 The Escapists: TWD retains its signature 8-bit graphics as well. At first, I thought it wasn't going to work with the Walking Dead theme because it transmits so little information about characters and settings, but they were so damn charming that they won me over before too long. The same goes for the sound, which has the 8-bit era sound effects but wisely opts instead for higher quality music. It's still electronic and fitting of the 8-bit everything else, but without the actual super-compressed sounds that would become grating in almost no time at all. I was actually surprised by how much I continued to like the music, even though there are only a handful of tracks that change throughout the different time periods of the day. Still, there is an option to turn the music off, which I expect will be nice for a lot of people.

So what has changed? The biggest and most important change is the sense of freedom you are given in this version of The Escapists. No longer do you have to hide from guards to do almost anything. You can go out and scavenge for weapons and supplies without fear of losing them all at the crushing hands of a random cell check. Everyone is working together, so you don't have to deal worry about making one of the characters hate you in order to make another like you. Removing the prison element of The Escapists allows the great parts of the game to take the spotlight. You don't have to worry about randomly losing all of your progress, which makes the slow, careful nature of the game feel strategic and thoughtful, rather than rushed and laced with anxiety of having to start over. You're still confined to your safe house, and the objective is still to escape, but you're much more free to enjoy the game mechanics along the way. 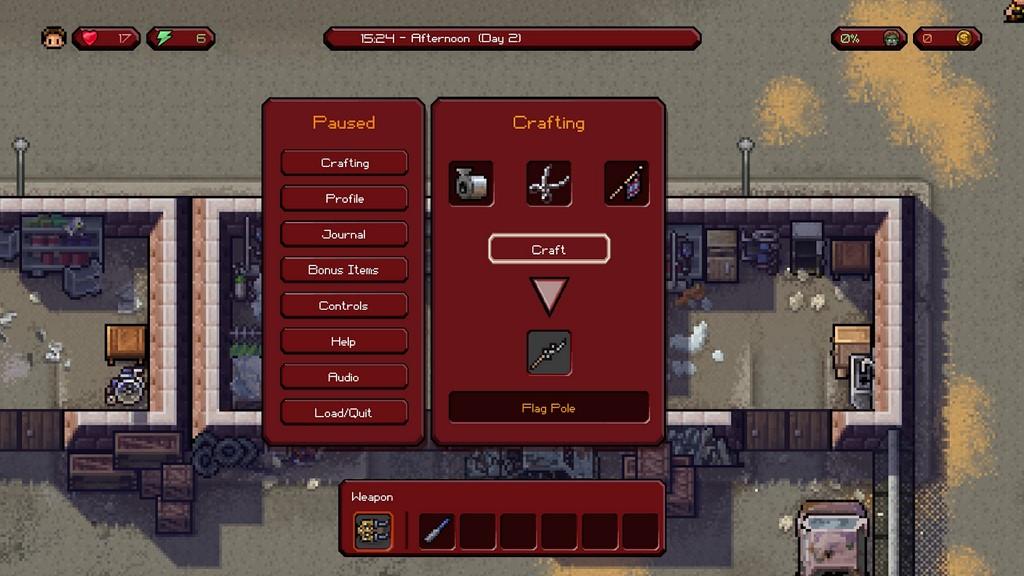 Strangely, one of the changes that adds the most freedom is the fact that The Escapists: TWD is actually much more linear. Each level gives you very specific objectives to complete in order to escape and move on to the next one. Side quests are still extremely tedious fetch quests, but now you have an objective marker to make them a little faster and less obnoxious. But it's still up to you to figure out how to complete these objectives, and you still must explore, craft, and innovate as much as you can in order to do so. The added direction makes the game a little less overwhelming, and you'll feel like you have much more freedom to experiment.

The crafting has been overhauled as well. Something like 70 new items have been added, many of which are weapons. TWD puts much more emphasis on crafting tools and weapons over things like disguises due to the nature of the zombie apocalypse. You don't have anything to hide any longer, so there is not as much need for items like fake fences and dolls to put in beds to fool guards. This makes the crafting feel more worthwhile, as you get to actually use everything you make to accomplish something. The crafting recipes are much easier to find this time around as well, so while you will still have to experiment for items, you'll have a little bit more help along the way. 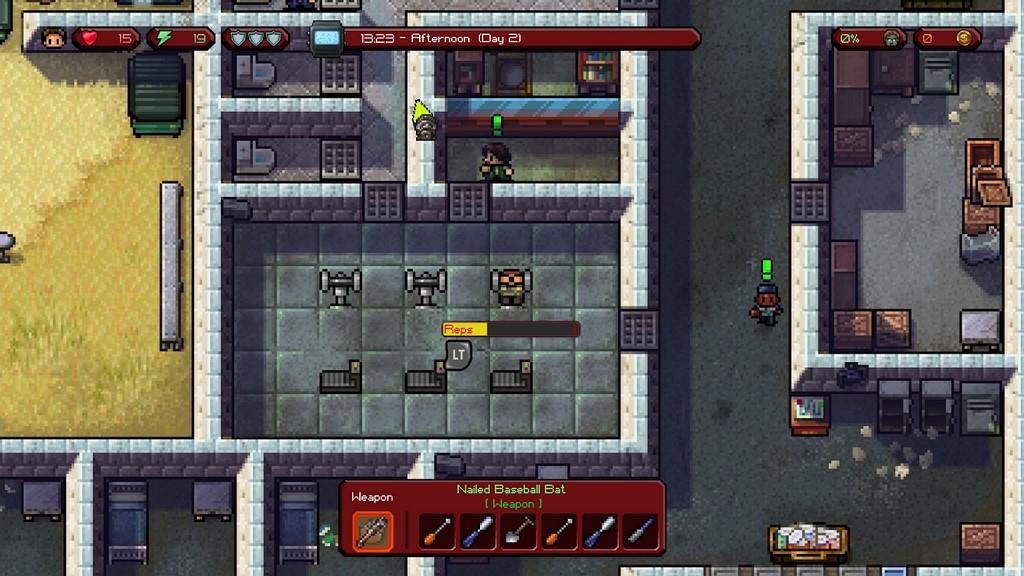 As much as I like this take on The Escapists, it isn't without its problems. It still has a tendency to get monotonous, due to your survival relying on routines and daily chores. The quests for your fellow survivors, like I mentioned before, are still terrible fetch quests, though the pain is eased by the objective markers. One of the most obvious issues is that some of the features haven't been translated to the new setting well. Many of the quests and systems are holdovers from the previous iteration, where they made sense in the context of a prison. For example, in The Escapists, often inmates would request you retrieve an item that another inmate stole from them. In The Escapists: TWD, survivors will now ask you to retrieve items that one of the zombies stole from them. I can't tell you how many times I retrieved a roll of duct tape from a klepto-walker. In addition, some of the chores seem, due to the gravity of the zombie apocalypse, relatively unimportant to the group's survival. I understand, from a gameplay perspective, why the zombie threat level rises if I don't do the laundry, but I can't help but think there is a better way to convert these tasks to something a little more apocalypse-appropriate.

A more forgiving spin on the prison-break theme of The Escapists, The Escapists: The Walking Dead removes some of the high stress from the original and gives the player more room to breathe and enjoy what was great about it.