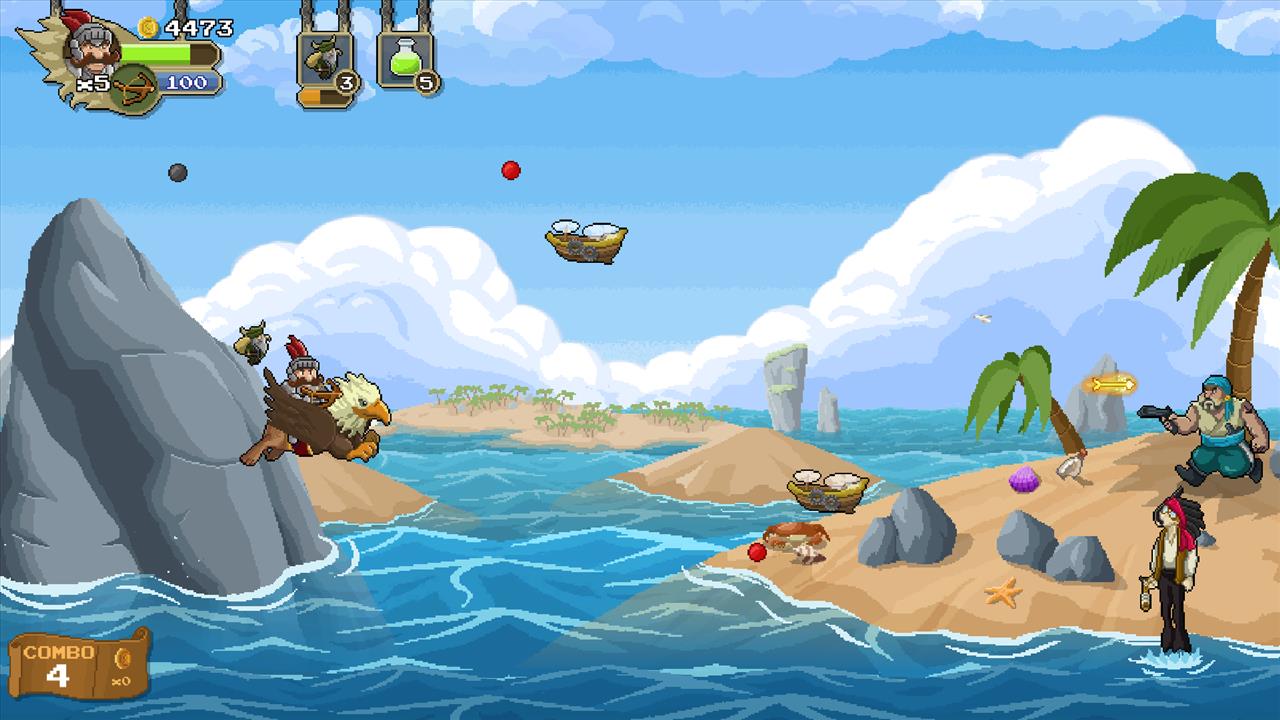 Perhaps its my age, or maybe even my “simple” tastes (not really), but retro-styled video games immediately grab my attention. I know that many developers use the visual, pixelated esthetic as a mere fad, trying to cash in on its popularity. Others understand that it is more than just a look, that it takes more to make a good, retro-styled game. Cyber Rhino Studios, thankfully, falls into the category of the latter. They get retro; better yet, they know how to blend old school and new school into an enjoyable adventure and it shows with Gryphon Knight Epic.

You are Sir Oliver, a brave and humble knight who discovers that his fellow warriors’ fates lie in his own hands. These aren’t your standard knights on horseback, but rather knights with trusty steeds that range from Oliver’s gryphon (which you will use directly in your adventure) to other unexpected mounts like gorillas, sharks, and even a scorpion. To say that this game has some unique characters would be an understatement. Following the defeat of a great dragon, he and his warrior-friends loot the remaining stash of treasure. Being the humble man that he is, Sir Oliver takes a mere amulet while his counterparts stock up on powerful weapons found throughout the lair. What they don’t know however, is that all of the weapons are cursed and will cause their new owners to embrace their inner-evil, turning on those they know and love. The only cure for this, you ask? Why, that is none other than the amulet that Sir Oliver now possess.

It’s a simple, yet fun story that sets the perfect stage for a colorful, old-school adventure. In a sense, the game reminds me of a shootem’ up version of Mega Man. After the introduction, players can choose to attack the stages / cursed warriors in any order that they choose. Obviously, there is a methodology to this as certain weapons and abilities that you will earn from one of your friends will help you in tackling another. Each stage has a unique setting, enemies, bosses, and multiple difficulty options. The enemies are plentiful and the boss battles are extremely varied, which helps keep things interesting along the way. You will get a nice mix of gigantic, screen filling bosses that challenge your ability to master your surroundings as well as smaller, more personal duels with your misguided warrior friends, testing your skills with your powers.

The stages in the game are auto-scrolling, moving things along automatically as you take to the skies upon your trusty gryphon. Although there is an auto-scrolling mechanic in place, players can choose to follow different paths within the game’s numerous worlds. While I really like the concept of being able to move around the game world freely, as it helps promote the exploration aspect of the adventure, it does create some serious problems during battle. There are too many times when I simply want to reverse my direction on the screen to attack enemies that are behind me, but doing so always triggers the screen’s scrolling option to head the other direction. It’s a nice mechanic for the sake of exploration, but it becomes a major hindrance during more intense battles. Players are forced to shift the screen back and forth multiple times during mid-stage fights with standard enemies, which is a major pain. 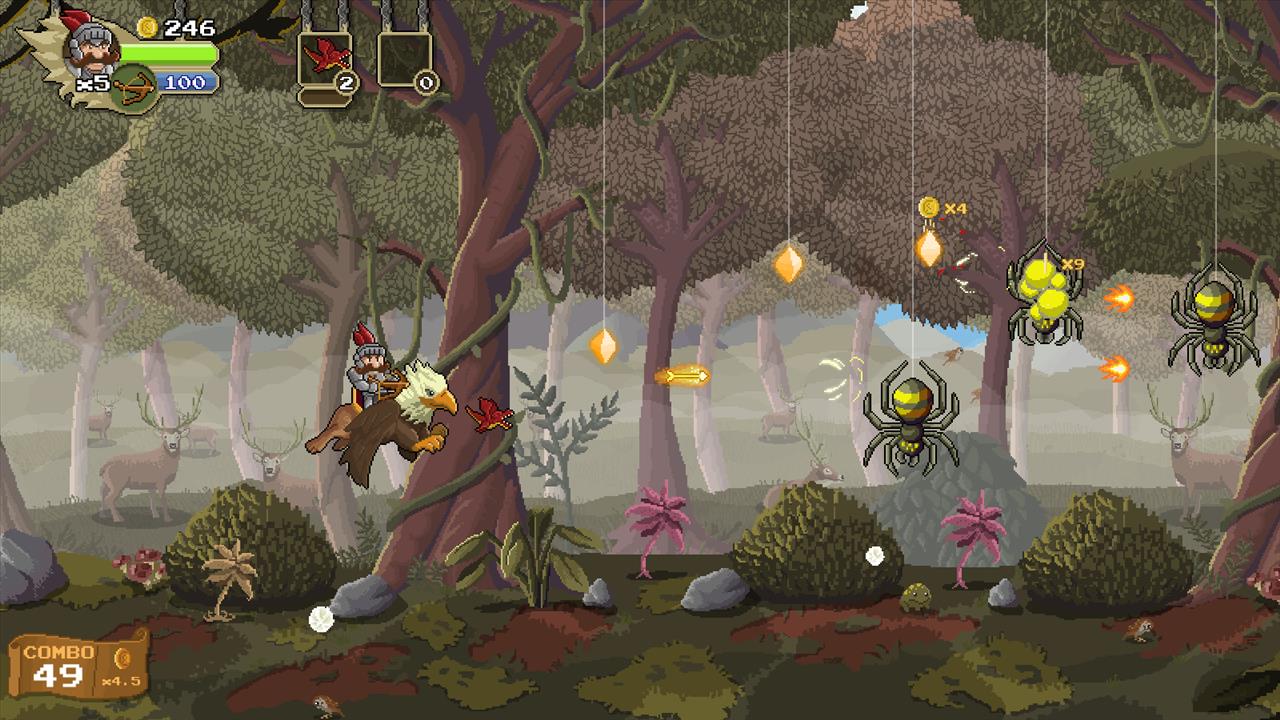 One of the things that I appreciated with the game’s AI, speaking particularly about the various boss battles, is that the enemies don’t necessarily follow set patterns with their movements or attacks as you would expect in a traditional shooter. This really keeps you on your toes and pushes you to master your arsenal so that you can adapt at a moment’s notice to what is going on around you. As a result, the game can get really hard, really fast. Even with the selectable difficulty levels available with each stage, prepare to put in some work and multiple attempts before you take down a warrior and earn their weapon.

As you gain powers, you can advance your abilities in a variety of ways. You will be adding more than just new types of shots, but powering up existing abilities as well. This is a great addition to the experience for the most part, but the manner in which it is implemented creates a few problems in the long run. The in-game economy of the upgrade system could use some serious re-balancing. A lot of the upgrades seem to get very expensive, very quickly, leaving the player no choice but to grind it out on completed stages. This could work in theory, but it is a little bit too tedious and the rewards just don’t match the work required. There is a such thing as “healthy grinding”, but unfortunately you will need to go beyond that in order to obtain the higher end of the power ups offered in the game. 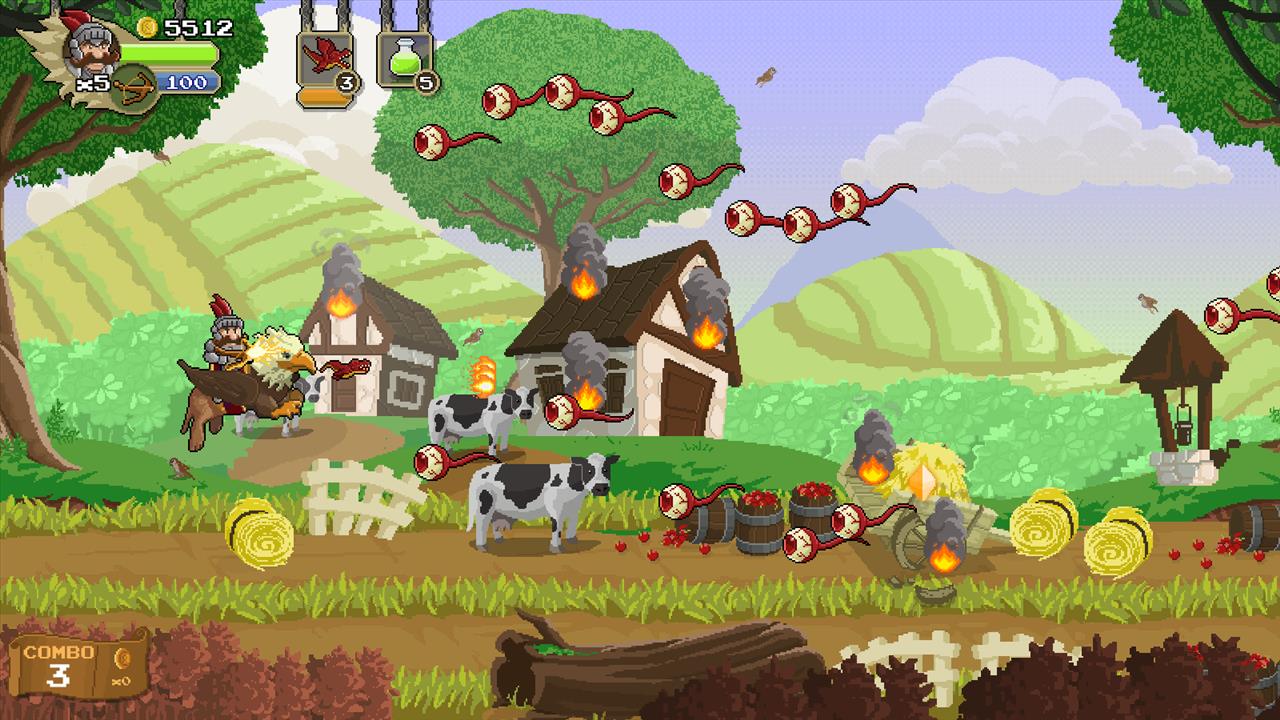 From a visual / audio perspective, the game looks and sounds absolutely fantastic. I love the sprite-based, pixelated style and Gryphon Knight Epic has some of the best sprites I have seen. The animations are all very detailed, both with tha,e various characters and the backgrounds, while fully embracing the 16-bit style in which they are based. It looks leaps and bounds above anything I played during that er but I can completely see the visual style being pulled off on classic hardware. The music elicits the exact same feelings; it works so well in this world while, at the same time, is convincing in a retro sense.

Gryphon Knight Epic was pretty much exactly what I had hoped for when I first saw the game posted on Kickstarter. It’s a fun and engaging shooter that reminds me of the classic games from the 8- and 16-bit era like Mega Man and Ghosts ‘N Goblins. The gameplay mechanics, with the exception of the level-scrolling issue, are simple yet extremely effective, making for a really enjoyable experience without complicating things too much. I would love to see a couple of things sorted out via patch post launch, particular an economical adjustment as I mentioned and something to help differentiate the screen scrolling from Sir Oliver’s movement direction. Retro fans should find plenty to love with this adventure.

A beautiful retro game with a great concept. However, there are a variety of hurdles along the way that keep it from being as good as it should have been.