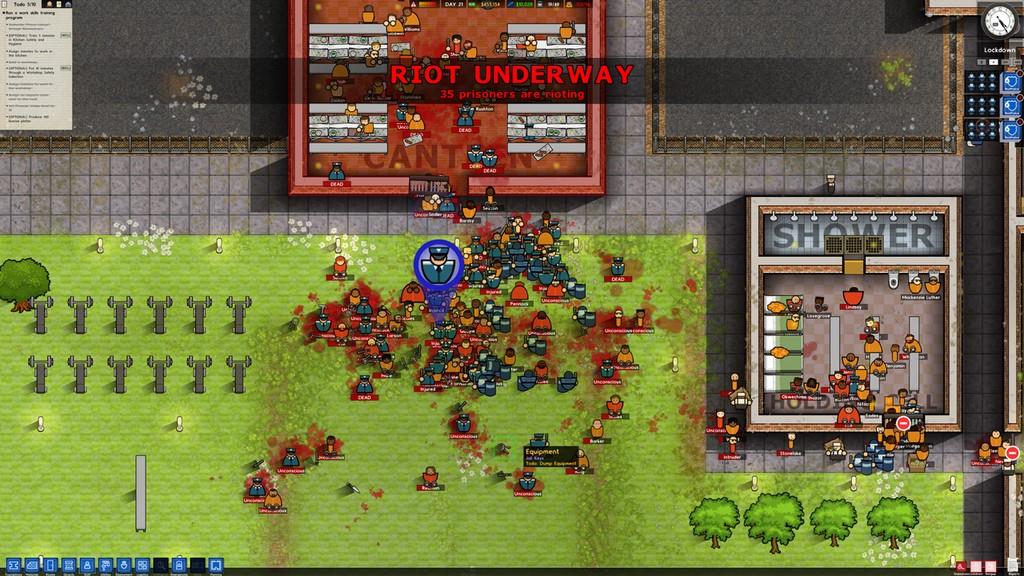 Written by Travis Huinker on 10/6/2015 for PC
More On: Prison Architect

Originally made available through Steam Early Access in September 2012, it's been a long time coming for the release of Prison Architect from developer Introversion Software. While I had owned the game's early access version for awhile, this was my first major introduction to the gameplay, which is best described as highly involved and detailed. Nearly every aspect, from managing the regime of your prisoners to the furnishings placed inside cells, is covered in the gameplay. While players might be tempted to jump straight into building their own prison, instead I recommend playing through the campaign. It does a great job of explaining and demonstrating the fundamental mechanics of running a prison. Once players have grasped the basics in the campaign, they can plan, build, and manage their own prison that can be set from various conditions, ranging from endless money to enabled gang support. Not to mention, after that, players can download a wide variety of levels and mods from the Steam Workshop, and then try their luck at playing as a prisoner in the new Escape mode.

The campaign that consists of narrated levels, while cinematics continually introduce new and more advanced gameplay mechanics. While the campaign might have felt like a glorified tutorial, it does it all in the right ways with interesting stories and freedom in regards to the extent at which players want to complete objectives. After feeling confident that I could run my own prison, I switched over to the Sandbox mode which proved quite a time consumer. Many hours later, I sat completely absorbed with trying to build and manage the perfect prison. While problems arose later with how I had initially designed its layout, it didn't quite matter as I couldn't step away from its addictive gameplay elements. The game's continual drive to provide the player with more prisoners and research opportunities ensure that the game never feels stagnant. Once I was housing 50 prisoners, I then wanted 100, and so on. The power trip quickly led to a prison expansion with additional cells and facilities that quickly overpressured my ability to manage all their daily running needs. A couple of riots and fires later, and I was back to the drawing board with lessons I had learned previously, with the renewed goal of building and managing the perfect prison. This core gameplay cycle is the primary reason why the game is so addictive and entertaining.

Yet, that core gameplay cycle can also lead to many of the game's frustrations that, to my surprise, can still be encountered after years of development. Unclear interface pop-ups, units becoming stuck, and certain gameplay elements breaking and requiring a save reload were some of the issues that I discovered during my playthrough. While none of them were major and stopped me from playing, I expected a bit more of a polished experience, considering the game is leaving early access. Even after completing the game's form of tutorials in the campaign, there were still multiple gameplay mechanics that required reading the game's wiki and various forums for more detailed explanations than provided by the game's often unclear text overlays. Once my prison had grown in size, there were multiple instances of units becoming stuck, such as workers saying the area was too dangerous to complete their objectives. After reading a forum thread, it became clear that once I reloaded my saved game file, they began to work again. While I still would push forward after these instances, I'm hoping that these minor issues will be fixed in future patches. 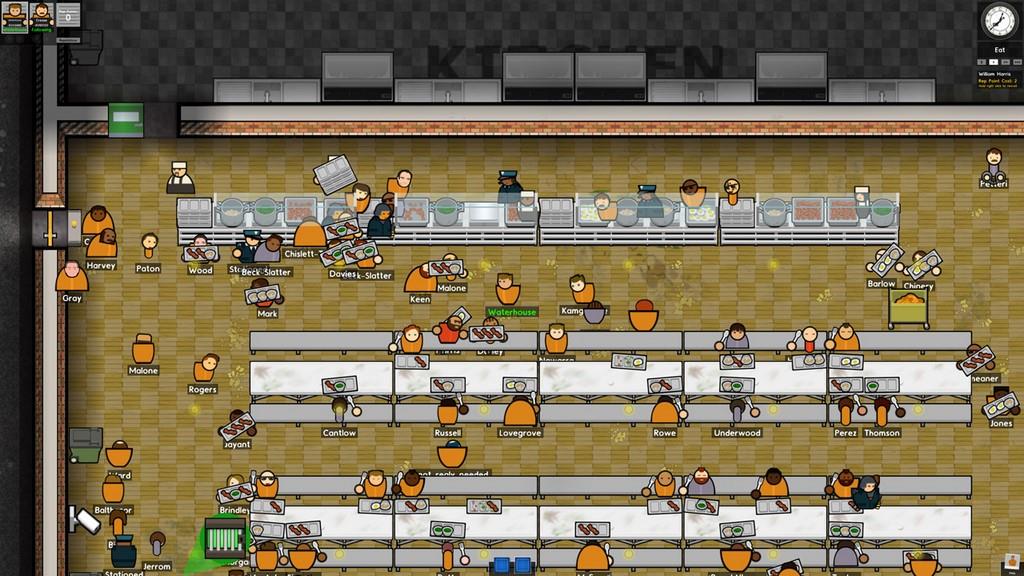 Even after those brief frustrations, I continued on with my prison building project because of the sheer number of options provided to players. Both freedom of how to build your prison, and the near endless amount of building and item types, ensure that players can build anything they imagine. Also, the initial map size can even be expanded with purchasing additional land plots that allow for players to create the ultimate in prison sizes. The planning aspect of prisons is also host to a wide range of settings from deciding the quality of food to the exact timing of prisoner regimes. Players that wish to rule with a iron fist can decide to ignore rehabilitation programs and instead spend the money on purchasing an armory to supply guards with shotguns and tasers. On the other hand, players with a more gentle touch can opt to build classrooms and libraries to provide prisoners with knowledge and the opportunity to work toward parole and eventual release. As with other simulation games players must pay attention to status meters, such as the happiness of prisoners, as well as overall safety rating that, if ignored, can lead to escape attempts, riots, and even fires. Fortunately, emergency services are on hand if firefighters or riot police need to be called in for backup.

Once I had a functioning prison—with all the systems in place, and the cycle of receiving and processing prisoners into their cells—it felt extremely satisfying. The routes in which players can take their prisons offer a continual series of projects, from adding a new visitation center for more family visits, to a laundry room in which prisoners can work daily. There's no shortage of activities, as research projects are constantly offered that reward money, if completed; which, in turn, enables further development of new buildings and staff types. While at times it can be a bit daunting to keep everything running in proper order, it adds to the game's charm of a fully functioning prison system, which might be a beautiful mess or well-oiled machine. I often found it rewarding just to sit back, zoom out, and enjoy the view of my prison creation working in all its glory. My guards would follow their planned routes, janitors would go about cleaning floors, prisoners would rush in a large group to the cafeteria for lunch, and, all the while, armed guards and doctors rush to the showers from a gang stabbing. The game's cycle from day to night, in which all your staff and prisoners go about their business, can often be forgotten about in the rush of adding new cells and such. But, in its own aspect, the day-and-night cycle is one of the game's best visual moments.

When players get bored with building and managing their prison, which isn't very likely, they can switch to the newly added Escape mode that places them in the role of a prisoner. Players can select from a prison on the Steam Workshop, or, my personal favorite, their own creation. After hours upon hours of building my own prison, it was hugely satisfying to experience it from the perspective of a prisoner. Not only the visual and gameplay changes, but it offered a lot of unexpected insights into ways that I could potentially improve how my prison system worked. While the Escape mode isn't overly complex in its gameplay mechanics, it's entertaining enough to provide as a distraction from the Sandbox mode. Players begin as a sole prisoner with the goal of acquiring additional inmates to form a gang, and, in turn, escape from the prison through various options: from digging a tunnel with stolen tools to an armed assault against guards with found weapons. If caught breaking rules or attempting to escape, players are given punishment, such as solitary confinement, that fortunately can be skipped for the benefit of time. While none of my attempts proved successful, I'll be retrying my goal of escaping from the very prison I created.

That's really the lasting wonder of Prison Architect: Wanting to continue playing even after its 2:00 in the morning. While the game still showcases an assortment of frustrations from its early access phase, hopefully these issues will be patched post release. Most notably there are ways in which the in-game interface could be improved to avoid having players search the internet for thorough explanations on the various gameplay mechanics. Those looking for an addictive, entertaining, rewarding, and often much-appreciated quirky gameplay experience shouldn't hesitate in picking up Prison Architect.

Prison Architect is one of the more unique game releases in years. What would seem daunting at first, with building and managing a prison, quickly reveals to be both an addictive and entertaining gameplay experience. While minor bugs can still be found from time to time, these don't distract from the overall enjoyment of creating the perfect prison. Entrepreneurial prison designers, this is the game you need to buy.