I’m not fond of reviewing old games. Most of the time I fail to see the point; if the game has been out for years or even decades, then thousands if not millions of people have already played it and decided whether they like it or not. My two cents aren’t going to help with anyone’s purchasing decision in the here and now.

However, when an old game is updated and given a new lease on life I’m tempted to take a look, especially if it’s a venerable classic like the original System Shock. The arcane geniuses at Night Dive Studios—who previously resurrected System Shock 2—have worked their magic on the seminal game that kicked off a whole family of shooters and RPGs. System Shock not only spawned a groundbreaking sequel, but inspired landmark successors including Deus Ex, Bioshock and Dead Space. Deus Ex in particular showed me just how far the artistic medium of video games could go, and at the risk of sounding pretentious, it also taught me a thing or two about philosophy and got me through some confusing times as an early teen. Passing up a go at the original System Shock would almost be an insult to its legacy.

System Shock was released by Looking Glass Studios in 1994, the same era as Doom, Dark Forces and Duke Nukem 3D. Unlike its more straightforward competition, however, System Shock has more in common with the previous game developed by Looking Glass, Ultima Underworld. This was the shooter landscape pre-Quake, when most first person games were called “doom clones,” and before mouselook had been widely adopted or even pioneered. It was anyone’s guess where the FPS genre would go and System Shock took a bold, complex, simulation-style approach that flew in the face of Doom’s straight run n’ gun action.

Unfortunately this means that System Shock is incredibly obtuse and clunky, even by the standards of its day, and judged next to modern shooters it has a steep, obstinate learning curve. System Shock was way, way ahead of its time in 1994 but the developers at Looking Glass took the long way around to solve nearly every interface and gameplay hurdle. In many respects it feels less like an FPS and more like a vehicle sim like M1 Tank Platoon or Tie Fighter, but even less intuitive if you can imagine that.

Your character—a cyberpunk hacker stranded on a space station after its AI takes control and begins churning out mutant monsters—has a cybernetic interface that rivals most strategy games. The actual field of view takes up less than half of your screen, almost like you’re in a tank, and is surrounded by status displays, power gages and a deep, tab-operated inventory system. Getting familiar with this HUD takes at least an hour, much less to the point where you can fight or navigate effectively. This is a problem, because Citadel Station is a dangerous and unforgiving place. 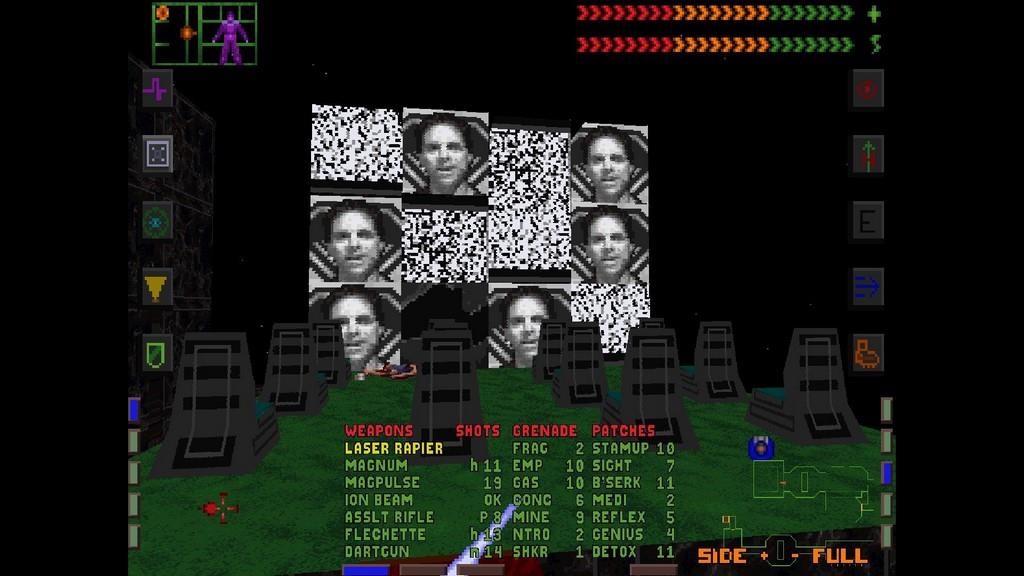 Night Dive have done what they can to alleviate these issues. Mouselook, previously only available in mods, has been patched in natively. This is a huge relief, as the old interface was a bizarre hybrid of Doom-style FPS directional keys and actually clicking and dragging the view like an old LucasArts adventure game. They’ve also remapped a control layout that used to employ half the keyboard in an awkward QWERTY ballet od ducking, leaning and various inane shortcuts. You can now run the game in 1024x768 resolution, or a true widescreen mode for modern displays. Best of all there’s a condensed view that pushes the busy inventory to the edges and gives you a much bigger view space. This makes System Shock a lot more manageable, but the layered inventory, floaty movement and general hostility of the environment still pose a huge challenge.

It’s a testament to Night Dive’s skills that System Shock Enhanced Edition is as accessible as it is. This is a game that was difficult to get running under a modern OS, much less mod to the point where the controls were workable. I won’t lie, it’s still a slog to get acclimated to this game. But if you put in the effort to learn System Shock’s bizarre dance moves, you’ll find a classic cyber-horror adventure that’s rarely been matched and never been surpassed. 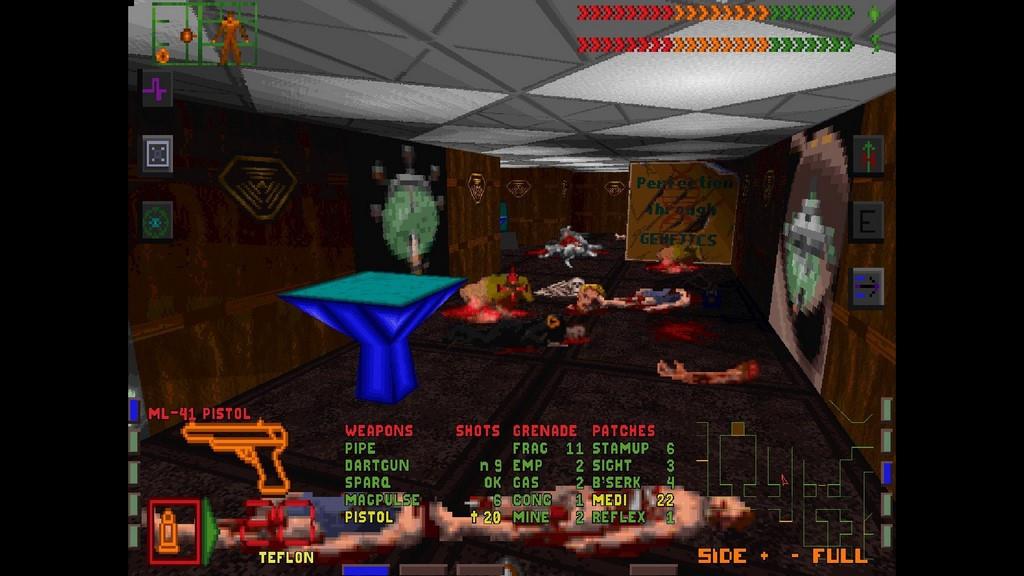 SHODAN, the insane AI who fancies herself a goddess and Citadel her own private creation to rule and experiment with, is the consummate scheming villain. Before GLaDOS made psycho AI a tired punchline, SHODAN was sending chills down gamers’ spines and making them curse at their CRT monitors. A lot of this has to do with the writing—she’s arrogant and conceited but also fiercely intelligent and controls everything on the station. The implications of what she’s doing to Citadel’s crew are disturbing to say the least, and no matter what she’s always one step ahead of you, toying with your hopes and fears. Of course SHODAN wouldn’t be so memorable without the twitchy, coldly condescending portrayal by voice actress Terri Brosius, who has gone on to do voice work in the Thief series and even as recently as Dishonored.

System Shock’s storytelling is its standout strength. While games like Doom 3 and Dead Space have effectively used audio logs to fill in backstory, that practice started right here with System Shock. In 1994 including recorded dialogue was a novelty—the industry was just beginning the transition from floppy disks to CDs—and lengthy pre-rendered cutscenes were prohibitively expensive. Gamers might groan at audio logs today, but it still works surprisingly well for System Shock. Hearing the crew begin to realize how dangerous SHODAN is and then grapple with her is unnerving in a way that hasn’t been replicated as effectively since…except in System Shock’s own sequel. 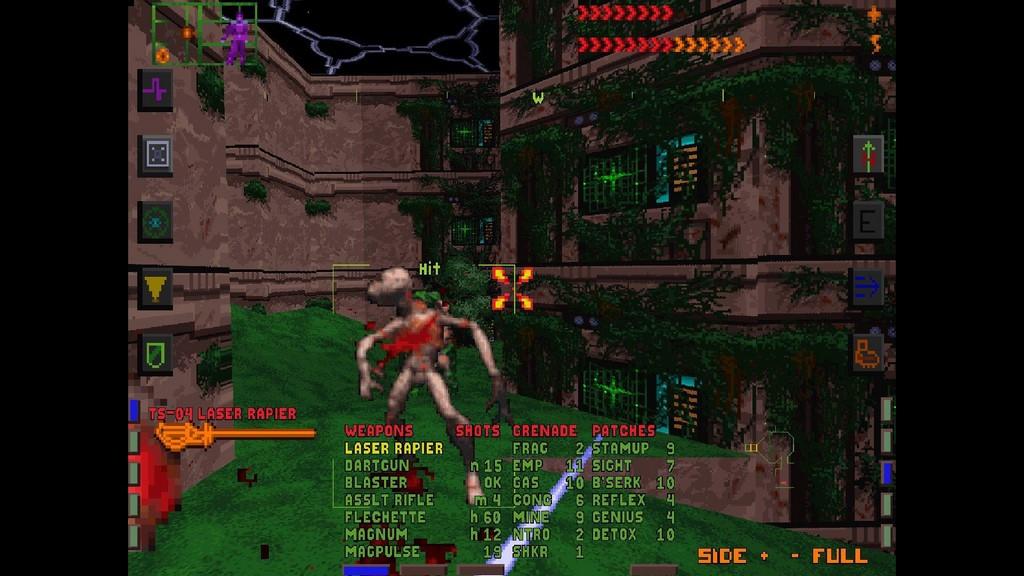 All of that has been preserved in this new Enhanced Edition. For better or worse, System Shock is still the same groundbreaking game that it was back in 1994. It still does things with narrative, gameplay depth and level design that were unheard of back then and are still at least moderately rare today. It’s still an uphill battle to learn the controls and get a feel for a game that drops you into a meat grinder, confused and literally spinning in circles. Night Dive has just added a spoonful of sugar to help the medicine go down, and once you get past that bitterness there’s a real gem to explore here.

To be clear System Shock will only be truly accessible to a new generation of gamers—or let’s be honest, to gamers in general regardless of era—if it’s rebuilt from the ground up. Something like System Shock 2’s interface, which was only mildly intimidating, would be ideal. No need for Bioshock levels of dumbing-down here. But as it stands, System Shock is a fascinating piece of gaming history, the genesis of an entire genre of FPS-RPG hybrids that has gone on to host some of the most respected titles of the last two decades.

Night Dive has done an admirable job streamlining a modding process into a marketable product, so anyone who has wanted to experience System Shock but was previously turned off by the technical hurdles can finally dive into the game. In that regard, it’s definitely worth a purchase. But don’t expect it to hold your hand or even give you a clue. System Shock is still a harsh, confounding mistress, as demanding and capricious as SHODAN herself.

System Shock Enhanced Edition is clunky, confusing and still absolutely brilliant. Night Dive has done impressive work to make this game playable on modern hardware, but the game still has a steep learning curve. A complicated and chilling experience await those who dare to enter System Shock.