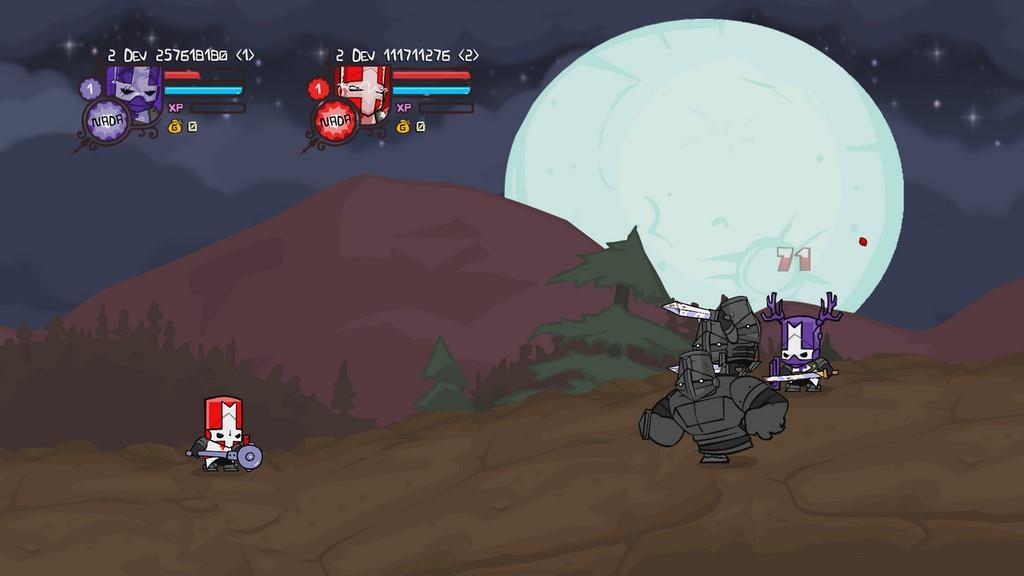 Written by Chapel Collins on 10/20/2015 for XBO
More On: Castle Crashers Remastered

Castle Crashers was, in its own way, one of the biggest games to be released for the Xbox 360. It first came out in 2008, as part of the first Summer of Arcade program on Xbox Live, which was, as far as I could tell, one of the biggest reasons the Xbox Arcade titles took off like they did. Out of that initial group in 2008, Castle Crashers was easily the standout, and continued to be one of the most well liked and popular arcade games all throughout the Xbox 360's life cycle. It is now being brought back to the forefront by being remastered for the Xbox One, but aside from a higher resolution and framerate, and one new game mode that is super unremarkable, the game has barely changed. This is both good and bad, as it retained the game that was so popular, but also doesn't really give much of a reason to buy it again for returning customers.

Castle Crashers is a 2D, sidescrolling beat-em-up, in which you (and preferably three friends) play as knights questing to free four captured princesses from the Dark Wizard. While seemingly pedestrian, the almost stereotypical medieval setting allows for a lot of the delightful satirical humor the game provides; it's easier to make fun of something everyone knows well. But it's not just ye olde medieval conventions that get a send-up from Castle Crashers. There are lightsaber-wielding knights, giant hostile ears of corn, and rainbow magic cast by pink knights, as well as pop culture references peppered throughout. Castle Crashers parodies gaming as a whole. It's dripping with its own brand of humor, which often borders on sheer absurdity. At times it flirts with taking the goofiness too far, but for the most part it manages to be constantly funny without getting old or getting (excessively) childish.

The most universally praised aspect of Castle Crashers was its presentation. It has more personality than some people I've met, and every aspect of the game works to keep the sense of humor and general goofiness up and running at all times. The graphics have always been simple in Castle Crashers, but as anyone who has played any game made by creators The Behemoth knows, they're absolutely fantastic. Art Director Dan Paladin may be the real hero behind Castle Crashers; without his wonderful art, the game wouldn't be nearly as charming or as fun, and that self-aware humor would not work nearly as well. The music is fantastic, too. It's jaunty and folksy when it needs to be, but it can also be upbeat and electronic if the situation demands it. The score goes through some pretty dramatic shifts in order to fit the theme of each level, and it helps the game reach the next level.

It's a good job that the tone of the game is so spot-on, because if Castle Crashers had to rely simply on its gameplay, there really wouldn't be anything special about it. That's not to say the gameplay is bad, because it's not. It's completely acceptable, and it accomplishes its job well enough, which is to be a vessel for the game's art and humor. You choose a knight at the start of the game, and each knight starts with a different weapon and has a different set of magic attacks. Weapons are completely interchangeable, however, so the only differences between characters are how they look and what type of magic they use. There are tons of unlockable characters that you get for completing the game with the other characters or by completing arena challenges. These characters level up as you progress through the game, and each time they level up they are given skill points with which to raise one of four skills: magic, strength, defense, and agility. These skills make your characters more powerful in certain ways, such as magic or ranged combat, and different combinations of the stats across multiple characters, as well as the horde of unlockable characters, provide the inclination to replay the game. 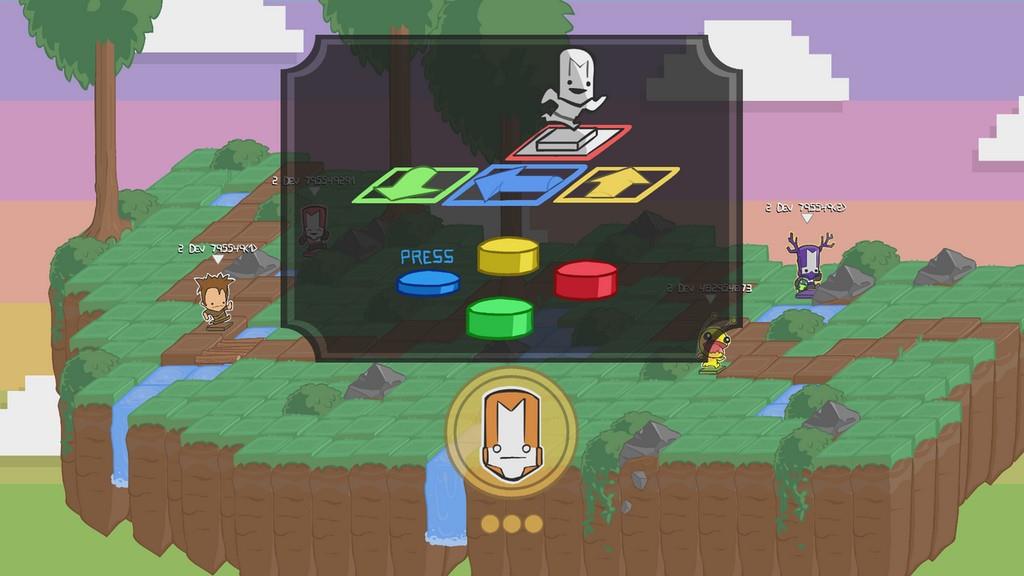 The thing is, the actual gameplay has a tendency to feel like it's dragging. Sometimes fights will take far too long, or a section of a level will feel like it has repeated multiple times, or a challenging boss will kill you and make you actually have to repeat a level multiple times. Castle Crasher's combat is really simple, and while it is fun most of the time, it can get old. For melee characters, you have a fast attack and a strong attack, and a few combos you unlock as you level up to work with. Agility-focused characters are encouraged to use a bow and arrow from range. Magic characters probably have the most interesting combat experience, as their handful of attacks are far more varied than the other kinds. You're free to mix and match combat styles as you please, due to the open ended skill points, but it does feel like there is incentive to focus on one or the other. There isn't enough variation to the mechanics of the combat to keep it interesting on its own. The variety of impeccably designed landscapes and areas are what keep the game fresh, not the gameplay.

However, the game is leagues fresher when you play it with friends in co-op mode. It's made very clear from the start that this is how it's is meant to be played. Having a group of players with each character assigned a role keeps the combat interesting, and makes the game go much faster; it won't drag nearly as much when playing multiplayer, both in terms of actual literal speed of progression and of the added fun of playing with friends. The silly nature of Castle Crashers is a perfect outlet for goofing off in a party. It's also worth noting that the release of this remastered version has caused a spike in the amount of players online. It takes barely any time at all for the matchmaking to find a game for you, so if all of your castle crashing friends are refusing to upgrade to the current gen, you can still get in that multiplayer experience. 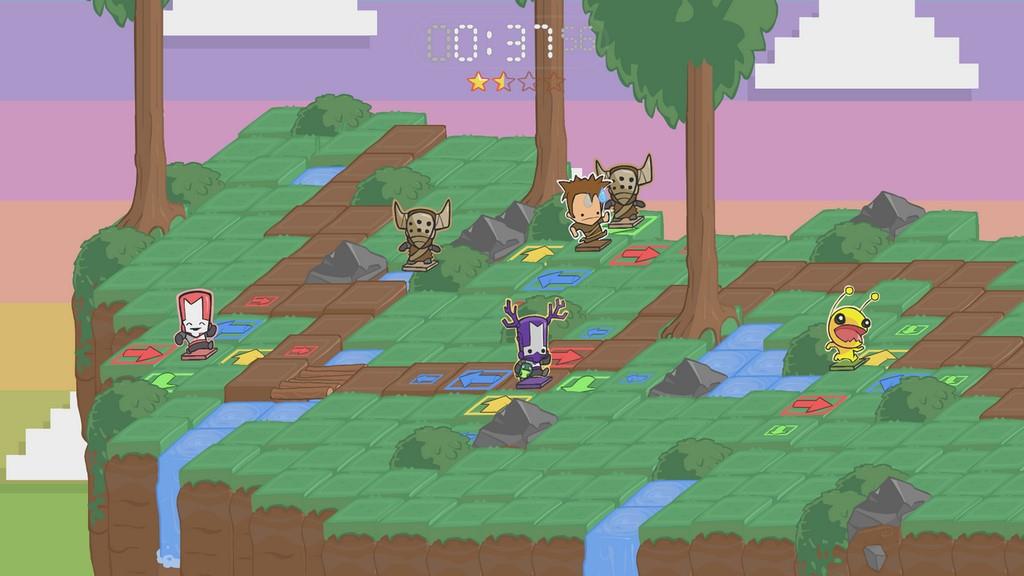 Despite the fact that this is a remaster, there's barely anything different in this version, aside from the steady 60FPS framerate and slightly crisper visuals; even the achievements are almost exactly the same. There is a new gameplay mode, called Back Off Barbarian. This mode will see you moving around a tiled board, sort of like a chess board, and avoiding barbarians. If one of them moves to the same tile as you, you lose, and your goal is to stay alive as long as you can. This mode replaces the similarly perfunctory All You Can Quaff mode from the last game, and I really don't know why they bothered. There's nothing wrong with this mode, I suppose, it's just incredibly minor.

Aside from that, Castle Crashers is exactly how you remembered it, unless one of us is remembering incorrectly. If you have somehow missed it for the last seven years, you simply must play it. If you have already played it, and want to play it again, you may just want to revisit your previous edition and play that instead, though it's worth mentioning that if you owned the previous Xbox 360 version, you can get the remastered version for only $4.99. It's an undeniably solid game, but nevertheless, this is more of a re-release than a remaster.

If you somehow still haven't played Castle Crashers, now is the perfect time to do so. If you already have the game on another platform, it may not be worth the upgrade, because the game has been changed so little that you won't be missing anything new.