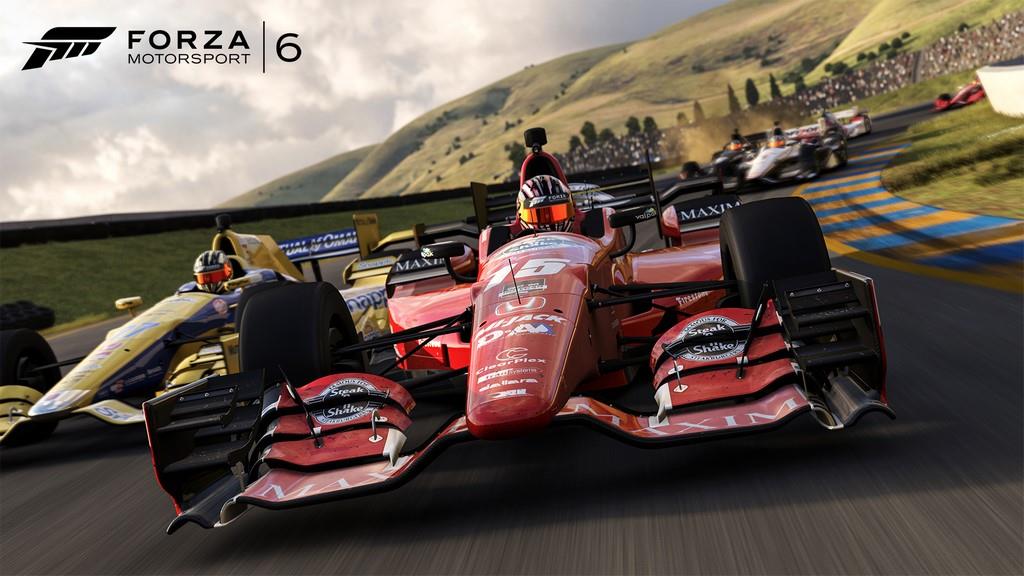 Racing titles have always been a bit of a hot and cold streak in my gaming history. I have enjoyed the early Gran Turismo titles as well as Need for Speed, though I will openly admit that the Burnout series has been my personal favorite as the perfect mix of arcade and simulation. I might have to change my stance, however, because Forza 6 is a title that commands respect and attention and does so in beautiful ways.

Forza 6 has the job of being as good of a racing simulator as possible. This is not an arcade-style racer where you drop into a makeshift track, race a couple of laps and you’re done with it. This game is a long haul simulation where the goal is to unlock everything possible to get the most out of the game because there are so many options, especially when it comes to vehicles. Forza 6 boasts a collection of over 450 vehicles that range in age from the late 1930s all the way up to 2017. Speaking of 2017, the game gives you a little taste right out of the gate of having a sexy car to race by throwing the 2017 Ford GT onto the track for the tutorial. This is a quick hitter and gets a player used to the controls as quickly as possible. Forza veterans are not going to notice much of a change in the controls with the traditional Xbox controller and, considering it isn’t a steering wheel, the controller actually handles it pretty well. I will say that half of this review was done with the controller and the other half was done with the new Logitech G920 Force-Feedback Racing Wheel, and I will talk about my experience with the wheel later on. There will also be a full review on the accessory.

After cruising through the tutorial in the Ford GT, it’s time to open up with the first vehicle to own. I decided that my first car should be the Mazda RX7. After selecting it, it was time for a few qualification races on different styles of tracks. I didn’t have much of an issue until I got to the Long Beach road course, which is a major pain if you’re a rookie to Forza. I haven’t played Forza in some time, so Long Beach took a few times to get through since it requires finishing on the podium in order to advance. The beauty of Forza, though, is that once these qualification races are knocked out, then the entire game is yours for the taking. There are plenty of famous tracks to choose from, including the American-based Daytona International Speedway and Indianapolis Motor Speedway. Fans of international racing will be happy to see Le Mans Circuit de la Sarthe, Top Gear, the Bernese Alps, and Circuit de Catalunya.

Unlocking everything is simple: Race your cars, build them up, and win various competitions. Every competition has certain limitations and requirements so that a player isn’t going into a race with an overpowered F-1 style vehicle and the rest of the cars are average hatchback racers. It doesn’t take much to make a car conform to specifications for a race, though, and that’s one of the beautiful options of Forza. I ended up winning a Nissan Fairlady Z early on in my run and pumped it up as high as it could go as I won a huge amount of credits right before that. However, I pushed its upgrades so high that I couldn’t race any of the early tracks. When the alert came up, the game gave me the option of downgrading the car to fit the race qualifications. This did not punish me as all it did was swap out the gear and show me what it would cost if I didn’t have one or two of the parts necessary for the upgrade. I could also immediately put the car back to maximum after the race if I felt like it. Racing games can get overly complicated with upgrades, and Forza helps take away the chaos of this. 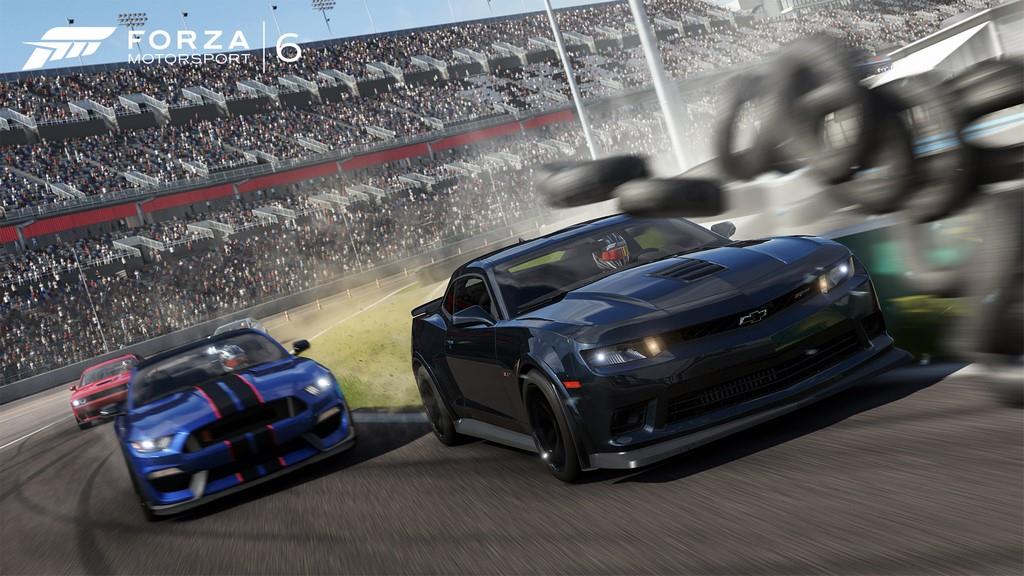 The in-game experience is beautiful and one of the best I’ve ever seen when it comes to the total package. Indianapolis looked fantastic in all its glory and was as accurate as I had ever seen it. It was scary even seeing the individual specks in the bricks and concrete on slow motion replays as if they were the real thing. The feel of the vehicle with the Xbox controller, as I mentioned earlier, was surprisingly good. However, it doesn’t really compare to having a good steering wheel and pedal combination. Using the G920 took this game to the next level when it came to the experience. I opted most of the time for an in-car viewing angle for the most accurate experience and watching the hands turn the wheel as I turned the G920 was a beautiful thing. I’m a huge stickler for the minor details, and Forza not only passes the test, but it aces it. All of the gauges inside the vehicle are accurate down to the last detail.

While I was at Indianapolis, I opted to mess around with some of the helpers and settings that Forza has. Early on in the game, every assist is activated to help keep a player on the road. Braking systems, whether it’s ABS or auto-braking before hitting a turn, the guidance track, even traction assist all exist to help a player out. Turning anything off to go with more of a manual feel will result in getting a bonus in credits for completing each race, so there’s a huge reward if you get good enough where no assists are needed. It will take a long amount of time to get there, but for fun, try turning every assist off and running a race on your own. It’s a rather humbling experience.

Upgrades are handled a few ways. Credits will buy whatever parts are needed for permanent improvements while there are cards to use for one-race options. Need a little extra traction on that road course? Burn a card that will give you an extra 25% grip. A little short on credits and want some more? Pull out that card you earned a few races ago that will give you an extra 20% credits on your winnings. Besides these options, there’s a level up system. Upon leveling up, a player will be presented with a Press Your Luck-style board that has nine prizes. One prize in the middle is always an amazing option, such as a very high priced vehicle or a bunch of credits. I was lucky enough to win 1 million credits on my first level up and that gave me free reign to find cars that I wanted to buy. 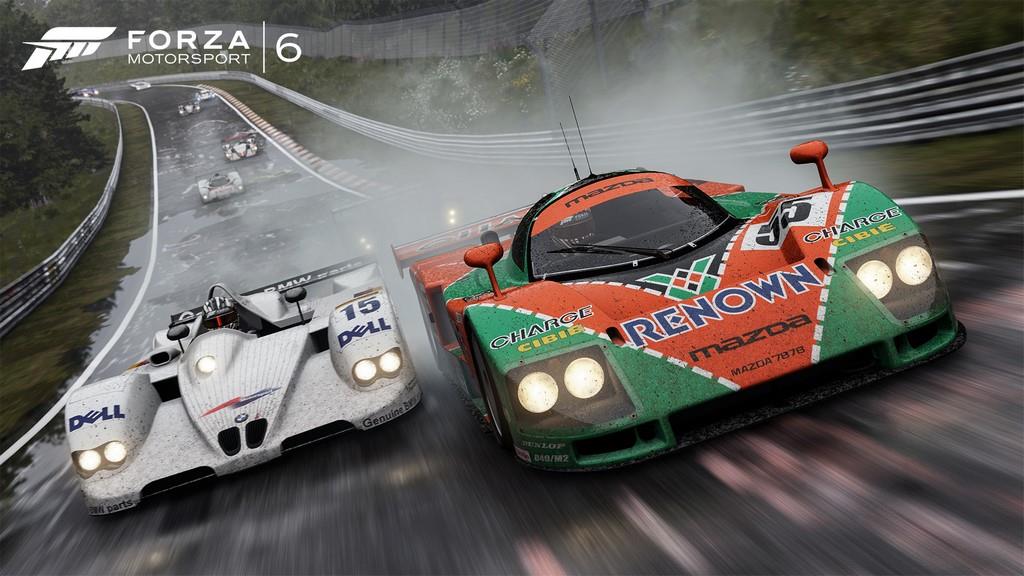 I decided to mess around with some of the road tracks after getting my fill of oval racing. I also wanted to see how accurate the game was when it came to physics, specifically when racing in wet conditions. This is easily the biggest surprise I had when playing Forza. Turning on the rain was an experience in itself. The rain splashing down onto the windshield (or the screen in alternate car views) was so good, I would get distracted by how great it looked. If the rain has been going for a while in the game, puddles start to form. Let me tell you that these puddles are not just for show. They are there to punish you if you do any kind of turn through them, and it’s quite the experience. Even with the G920, the slightest of turns when going through that puddle caused a spin out and it feels like what would exactly happen if doing it for real.

There is so much to unlock in single-player that it’s easy to forget that the online mode exists to compete against racers around the world. The online modes are simple and to the point. There are seven modes to choose from and up to 24 racers can join any race. These modes will range from simple, one-race sessions all the way to having a full season against other racers. I didn’t get much of a chance to enjoy multi-player (mainly because I was so locked into the single-player) but it was quite enjoyable to take on players in such a large session. Again, this was a humbling experience as I think the highest I placed was ninth. That being said, it’s easy to get better if you find a few cars you get comfortable with and know how to handle.

All in all, Forza 6 is a very satisfying racing experience. For those who prefer the arcade style racers, this is not going to be the game for you. This is the game for people who appreciate accuracy and building up a collection from the ground up. The scenery is nothing short of spectacular and the game is fully customizable from the easiest of the easy to the most difficult and accurate experience possible. There is so much to enjoy in Forza that you could play it for 200 hours and not even scratch the surface of things you can unlock. Turn 10 Studios deserves to take a bow, because they’ve given us a spectacular racing simulator.

With 21 authentic tracks to choose from and over 450 cars to unlock, Forza 6 has knocked it out of the park to provide gamers with an amazing experience from start to finish. Whether with the xbox controller or a steering wheel, there's so much to enjoy that you'll forget just how much time you put in.