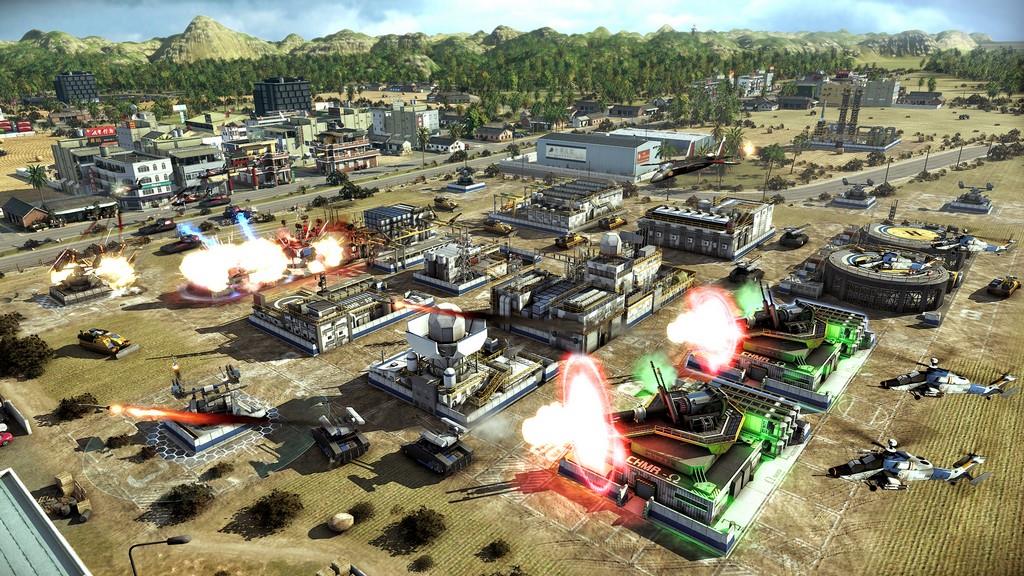 Written by Travis Huinker on 9/2/2015 for PC
More On: Act of Aggression

Paris-based developer Eugen Systems is no stranger to strategy games, with a varied catalog of titles including the Wargame and Act of War series. In the developer's latest real-time strategy game, Act of Aggression, the gameplay focus is set on returning to the genre's golden era of the 1990s and early 2000s. Instantly noticeable while playing the game is its nostalgia-inducing feelings of past RTS games, such as those from the Command and Conquer series. It's refreshing to see the game's return to the genre basics of collecting resources, building a base, and then amassing a large enough army to destroy the enemy's forces. While a return to the basics is a great start, the game isn't afraid to include new gameplay elements such as super weapons. Diverse factions and units, continual struggle for resources, and well-designed maps are the primary elements in what makes the game such a joy to play. The only lacking element, which is most often the case in RTS games, is a mediocre campaign that never compares to the excellence of skirmish and multiplayer modes.

The extent to which an RTS is compelling is tied directly to how well-designed its factions are in regards to each having their own unique gameplay feeling. The game contains three factions to select from: the U.S. Army, Cartel, and Chimera. The U.S. Army faction is the most basic of the three, in terms of its base construction and management, and the selection of units available, ranging from M1 Abrams tanks to Black Hawk helicopters. While the U.S. Army faction focuses on brute-force, high-powered units, the mysterious and private military-based Cartel instead offers players a stealth approach to combat, with the use of prototype-based units that employ cloaking fields and rail gun weaponry. Lastly, the Chimera faction functions as the most versatile of the three in how its units can approach combat situations, through the combined use of offensive and defense technologies. Each of the factions also differ on how they approach collecting resources, constructing and managing bases, and progressing along the tech tree. Many variables have to be learned, in that some factions require more electricity to power their bases, while others require more resources to build units.

The contrast between factions continues to the selection of infantry, vehicle, and air units. Not just the variety in the unit selection, but also the amount that each side has access to is impressive. In most RTS games, each unit type usually only offers a limited section. In Act of Aggression, there are both light and heavy vehicles, with later game prototype tanks resulting in fierce combat situations. Not only do players have to worry about ground battles, but the game's element of air warfare differs a bit from other genre games, in that jets and bombers can only be launched at specific map locations and then undergo a cooldown timer. Helicopters, on the other hand, function as normal units that can be moved around maps that function primarily for attacks, while others can transport infantry units. Once players reach certain research and resource conditions in later stages of matches. They're able to construct super weapons that range from nuclear bombs to railgun blasts. Fortunately, players can protect themselves with strategic defense systems and units that prevent strikes from reaching the ground. While most of the game's units are based upon real-life counterparts, there are also those that borrow concepts from near-future technologies that fit perfectly in the game's setting. 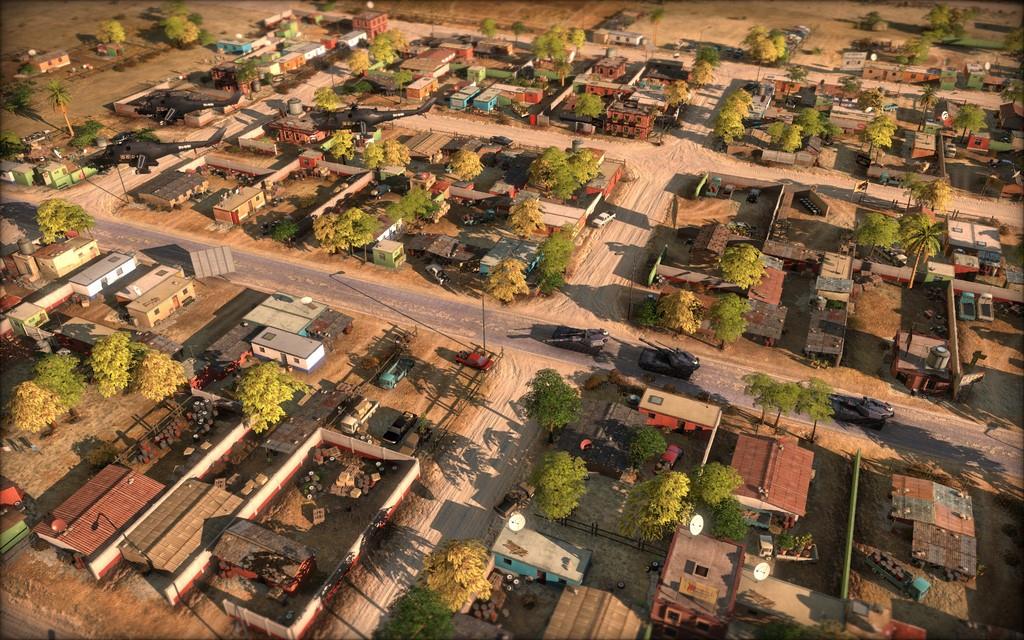 A particular element that constantly pushes the gameplay forward in matches is the struggle for resources. Each map has a finite set of resource points for oil, aluminum, and rare Earth metals that are vital for constructing and managing a successful base and supply of units. The tendency to play it safe can often be undermined by not securing additional resource points before the enemy reaps their benefits. The duration of resource points tend to be short lived, forcing players to expand their bases forward into the battlefield, often resulting in tense situations of control and defend. Another factor that must be weighed in battle is the cost of units and their life on the battlefield. If units are either sent unprepared into battle situations, or made to face superior forces, they will quickly succumb to defeat. Considering the finite amount of sources and the cost factor of units, players must carefully manage their gathering of resources and strategic incursions into combat.

While diverse factions and units are all great, none of them would matter if the maps weren't well-designed. Fortunately, Act of Aggression contains some of the best-designed maps ever seen in RTS games—even considering those from the '90s and early '00s. The reason being is, that maps don't feel like something constructed for a game, but rather an authentic recreation of real-life environments. The maps in particular designed for team-based combat, up to eight players, result in a combination of constant battles for both resources and territories. Map locations not only contain spans of land, but are also intertwined with cities and roads that can be used as strategic locations and supply lines. Buildings located across maps can also be occupied by soldiers for cover, and banks, if controlled, provide resource generation. Upon launch, the game includes 20 maps that take place on five continents across the globe. 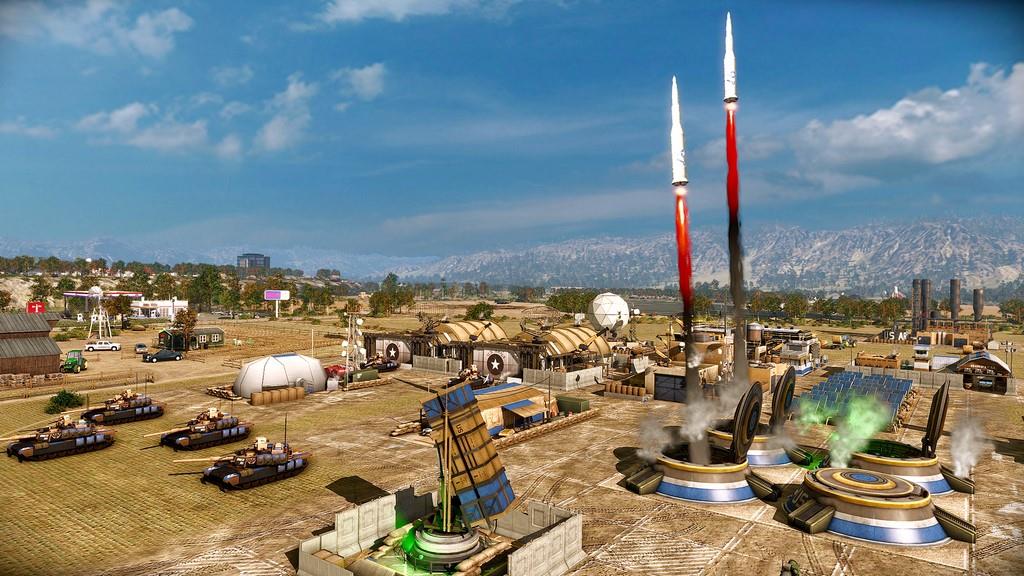 The only element that suffers in Act of Aggression are the campaigns for the Chimera and Cartel factions. While some missions provide interesting premises and victory conditions, Chimera and Cartel suffer from lackluster narratives that are accompanied by mediocre voice acting and lack of interest in each faction's motives. The Chimera campaign takes far too long to pick up in intensity, while, fortunately, the Cartel narrative begins quicker by providing players access to a wider array of units. Much of the entertainment and excitement that result from gameplay in Act of Aggression is the player's freedom in their approach to victory, which is the primary reason making the skirmish and multiplayer modes far superior. It's a major plus that the campaigns are included in the base package, but they shouldn't be a main selling point for any prospective buyer.

Presentation-wise, the game succeeds on multiple levels, ranging from its spectacular explosion graphical effects to the bass-booming combat auditory experience. Battles result in perfect cities and environments transforming into war-torn fields of destruction. While players might play the game zoomed out for a majority of the time, it's recommended to take some time examining buildings and units up close to appreciate their extreme attention to detail. Buildings operate with full animations to make them feel alive, while units have such a high level of attention to detail that even military tech logos can be read on textures. This high attention to detail is especially appreciated upon unlocking additional units to see them function in combat, even if their lives are short lived from deadly combat encounters.

Not only does Act of Aggression succeed in successfully recreating the gameplay experience of '90s and early '00s real-time strategy games, it goes beyond by delivering a game that's perfect for new genre fans and veterans alike. The combination of diverse and interesting factions and units, fierce struggles for resources, and well-designed maps result in the productivity-avoiding excuse of "just one more turn." Act of Aggression is a must-own game for both real-time strategy genre enthusiasts and newcomers.

Move over, Command and Conquer, there's a new king of the genre. Act of Aggression is a perfect recreation of the elements that made '90s and early '00s real-time strategy games such a joy to play. Diverse factions and units, continually evolving gameplay, and authentic-feeling maps make for a must-own game for RTS enthusiasts and newcomers.