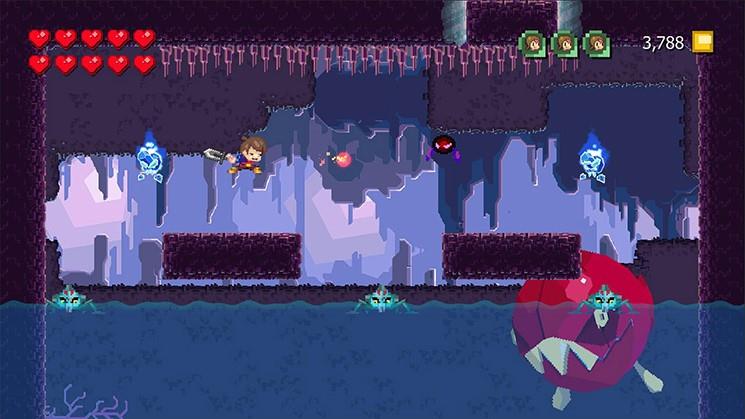 Written by Sean Colleli on 9/3/2015 for WiiU
More On: Adventures of Pip

There are some games where the sheer creativity of the concept can overshadow, or even support, serviceable gameplay. Such is the case with Adventures of Pip, a game with a killer idea, a clever meta-concept and precocious humor, which all serves to prop up its merely solid platformer gameplay. That’s not to say Adventures of Pip is a bad game, just that its core idea is so original that a standard 2D platformer could never fully exploit that idea. And yet, unlike many of its far lazier indie cousins, Adventures of Pip couldn’t be anything other than a 2D platformer.

Adventures of Pip takes place in a fanciful kingdom powered by the Bitstream, an ethereal river of data that gives everything in the kingdom substance and detail. In this kingdom, your detail level is determined by your wealth and social standing. The king and queen are dignified 32-bit sprites, whereas more common folk are 16-bit or even 8-bit. The king and queen’s daughter, Princess Adeline, is prophesized to have the ability to control the Bitstream at will, reshaping reality as she sees fit.

Naturally, the evil Queen Derezzia, a jealous sorceress from a neighboring land, wishes to have this power all to herself. She attacks the kingdom, starts stealing the detail from the local populace, and captures Princess Adeline. It’s now up to Pip, a young boy who is so lowly that he exists as a single red pixel, to save the kingdom. He pursues Derezzia and the princess, but is quickly dispatched by the queen’s nefarious power. Luckily, Pip happens upon the grave of a noble knight who appears as a ghost and bestows a great ability upon Pip.

By vanquishing glowing ghost enemies, Pip can absorb their power and increase in resolution. This means he can evolve from a single blocky pixel into a Mario-esque 8-bit sprite, and, as the game progresses, into an even bigger, more dangerous 16-bit sprite. Gaining resolution isn’t a simple power-up though; shifting up and down the resolution scale is the core aspect of the gameplay. For instance, pixel-Pip’s only offensive ability is to stomp on enemies. However he is the smallest, so he can fit through tight spaces and his slim form lets him float farther than his more detailed incarnations.

8-bit Pip can punch and kick, and his greater heft lets him stick to walls and wall-kick up vertical shafts. Evolving once more into 16-bit Pip grants a sword for dealing serious damage, but, at this stage, Pip is relatively huge and heavy, so he’s not as good at navigating tricky platforming environments. Devolving also releases a burst of energetic pixels, which is crucial for destroying magical barriers and dealing damage to bosses. 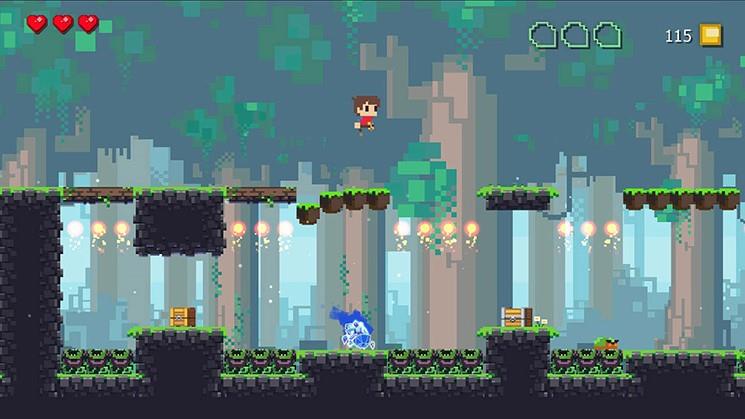 This leads to some truly creative gameplay situations, where Pip must level-up by hopping on a ghost, blast apart an obstruction by devolving, stick to a wall, slide down and lose one more level of resolution so he can slide through a crack and progress to the next room. The game is hitting you with these puzzles as early as the second level, too. It never reaches masochistic levels of platforming hell—this isn’t Super Meat Boy or They Bleed Pixels, after all—but I was surprised by the ingenious level design nonetheless. In fact, I appreciated that Adventures of Pip never got insanely difficult; I feel like some indie devs are just fixated at besting Miyamoto for hair-tearing platform difficulty, rather than making an engaging, satisfying experience.

I was also pleasantly surprised by how professionally the experience came across. Some games, like Sym, have a decent core concept, but the production values are wanting. Adventures of Pip feels like a super-polished remnant of the SNES or PS1 era. The music has the sweeping operatic quality of the original Soul Calibur, and the sprite animations and transitions are all super-smooth. This is crucial in a game explicitly about the lives of sprites, and developer Tic Toc Games just nails it. They do such a good job that they might soon give Wayforward Technologies, the reigning sprite art masters, a run for their money. 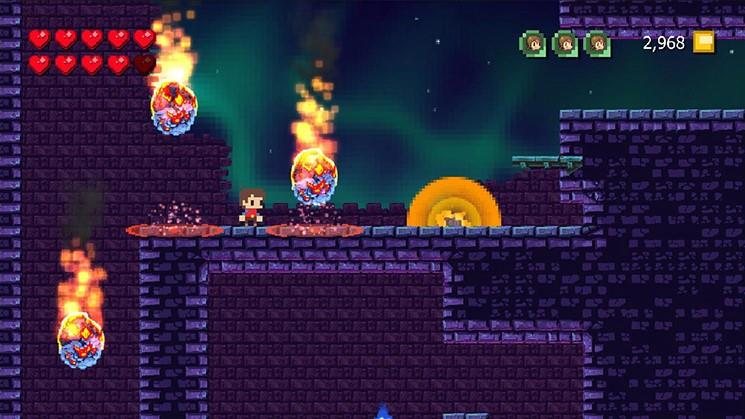 This mastery of the 2D art form makes me excited for what Tic Toc Games could do with potential sequels. Adding one more evolution to 32 or 64-bit 3D polygons, with a jarring Super Paper Mario-style transition, could make the level design absolutely crazy and allow Pip to see the world from a whole new perspective, literally. Such Flatworld-esque paradigm shifts are tantalizing to entertain. But, as its stands, Adventures of Pip is a rare exception in the indie scene in that it accomplishes exactly what it sets out to do, nothing less, and maybe a little bit more. In an indie scene that is increasingly long on talk and begging, and short on delivery, that’s saying something.

Adventures of Pip feels like a game that just enjoys treating the player to a good time, without taking itself too seriously. “Whimsical” seems to be the one quality it strives for, and it thoroughly achieves. Tic Toc Games, refreshingly, doesn't want to bludgeon its audience with pretense or try to force some trite message. They met their relatively modest Kickstarter goal of $40,000 and delivered their game on time without excessive stalling or ripping off their fans. In the world of indie development that grows disappointingly more cutthroat and pretentious every year, Adventures of Pip is a delightful little game that fulfills its promises. This one definitely deserves your attention.

Adventures of Pip is a solid platformer with a clever premise. Those two aspects combine to make a game that is deceptively simple, charming and memorable.