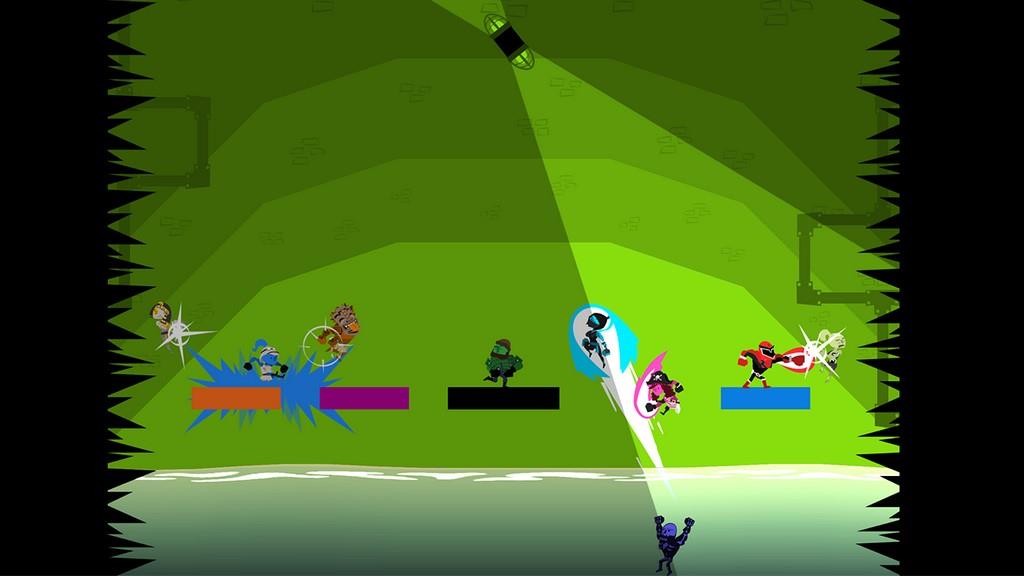 Ever play a game and think that it’s just a rip off of another game or borrows so many elements or mechanics from it that you think “it’s pretty much the same as *insert game here*”?  Yeah, I’m guilty of that as well and it can be hard not to be these days.  Personally I don’t mind as long as the game is good, but it can take some real creativity to come up with something that’s truly unique and has almost never been done before.  That’s where Runbow comes in.

Runbow is a game created by 13AM Games for the Wii U where the goal is rather simple; get to the end of each level and grab the trophy.  The challenge is in how you get there.  In each stage you’ll notice that the stage’s background color changes every couple of seconds.  There are several small colored platforms and ledges in each stage that match those various colors.  When the color of the background changes to the color of a ledge, that ledge will temporarily disappear until the color changes again and you’ll fall right through it, sometimes to your death.

Runbow can be played with up to nine players via the game pad, four Wii remotes, and four pro controllers.  You can also play alone, but only in the Adventure Mode which is the core mode for the game, and Bowhemoth Mode which I’ll get to in a moment.  You can select your stage via a grid and when you complete one, all adjacent stages will unlock.  Each stage has a color associated with its difficulty, green being easy, yellow a bit tougher, and red being some of the toughest stages in the game.  The goal here is to just get the trophy at the end as fast as possible and when playing with multiple players in this mode, you’ll play as a team.  I’ll explain why I mention that in a moment.

The grid itself is comprised of four quadrants and each one has one stage marked with an S.  At the end of those stages you take on a villain named Satura.  The goal of the stage is still kind of the same, just survive until the end, but then you have a single screen in which you have to get to the other side and attack Satura to end the stage.  The stages themselves aren’t too bad, but the final screen can get a bit tricky so don’t be surprised if you have to retry them over and over again. 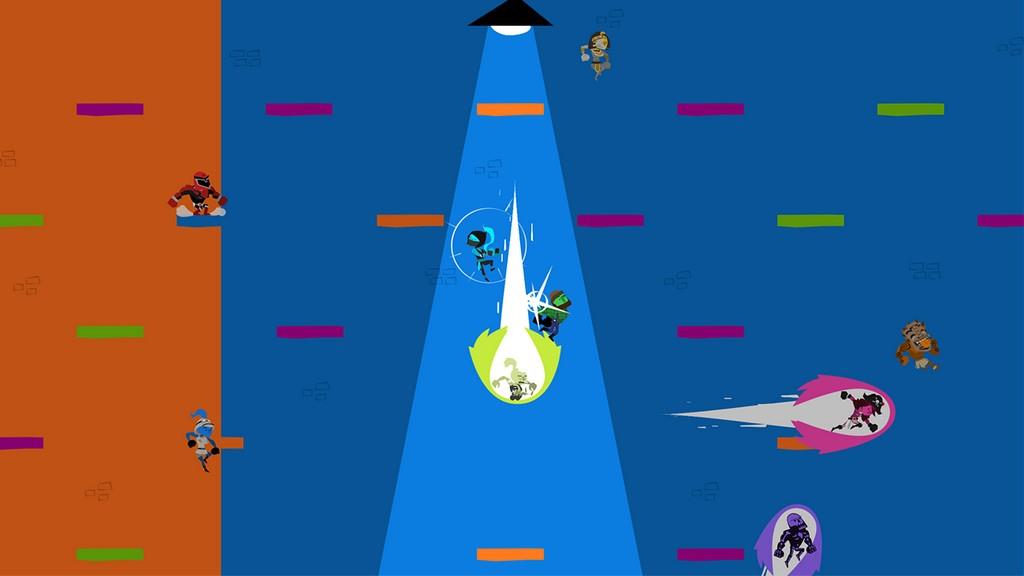 The other single player mode is called Bowhemoth and can also be played with multiple players.  The story here is that you got swallowed by the Bowhemoth and you have to escape.  However, you can’t save in this mode so it’s all about clearing every screen as fast as you can and if you decide to back out, you’ll have to start all over again the next time you wish to challenge the Bowhemoth.

There are several other modes of play for those who wish to play with friends, but unlike Adventure and Bowhemoth, these are a lot more competitive.  Each of these modes have a few options you can set such as the number of rounds and the color palette used.  First off you have Run Mode which looks like Adventure Mode, but the goal is to be the first to collect the trophy to get a point.  The person with the most points after the set number of rounds wins.  This is why I specifically mentioned earlier that Adventure Mode was more like a co-op mode when playing with multiple people.  Next up is Arena mode which is a last man standing challenge that typically takes place on a single screen.  The goal is simple; just survive longer than anyone else.  There’s really not much else to say about this one.

King of the Hill is pretty much like any other game; you have to control the hill for a set period of time, typically about eight seconds.  However, if for whatever reason you lose control of the hill (either someone pushed you off or you have to abandon it due to the changing colors), your timer doesn’t reset, rather it continues where you left off when you return, even if you died.  I actually like that aspect as I always found it annoying when you get so close to scoring a point and someone knocks you off or kills you and you lose all that progress.  Finally there’s Color Master which is pretty much like Adventure Mode or Run Mode, but the person with the game pad is the Color Master whose job is to  do whatever they can to sabotage the other players.  They can do this by changing colors at will or dropping hazards on them.  Naturally the person or team with the most amount of points after the set number of rounds wins.

On the whole Runbow is an enjoyable game with a decent amount of single player and multiplayer content.  The Adventure Mode consists of four 6x6 grids for plenty of challenge, though I did have one nitpick while playing (which can also be said for any mode), and that’s occasionally it seemed like my double jumped should have landed me safely on a ledge or platform, but I slid into a pit and died.  It occasionally looked like the double jump itself didn’t get me as high as I thought it should have, but the thing that got me was it appeared my character landed safely on the corner of a platform, only to slide right back into a pit and die.  Maybe it’s just me but it seems like some weird collision detection. 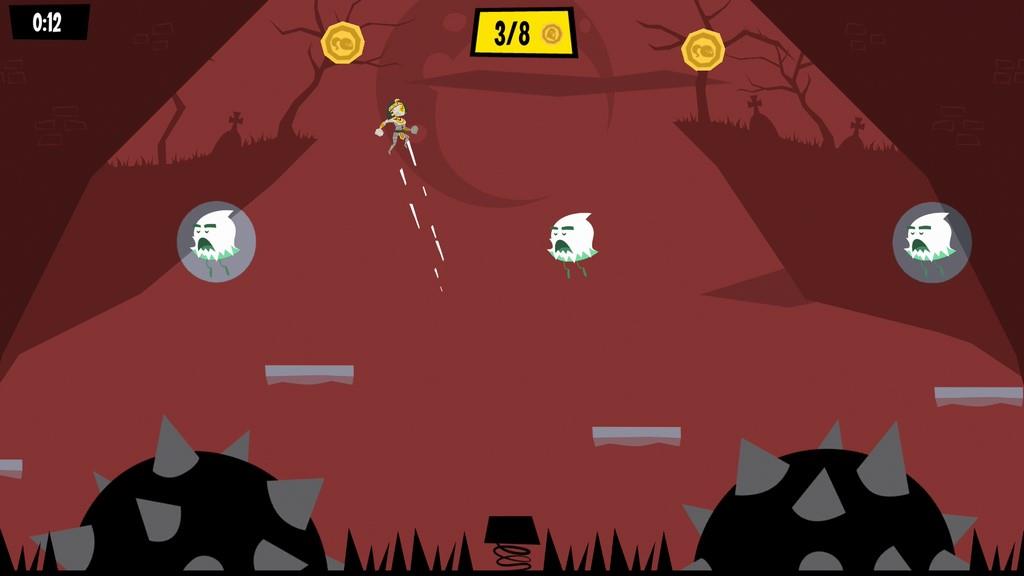 As for the multiplayer, that’s where I feel this game shines a lot.  Don’t get me wrong, I enjoyed Adventure and Bowhemoth, and it’s hard for me to experience multiplayer on my own, but with an extra Wii remote or two hanging around my room I was able to try and check it out and with only one or two other people I can see where it can get fun, but I can only imagine the chaos of having nine characters on the screen at once.  Thankfully you can pick from different characters and one or two have multiple colors to choose from.

Overall Runbow is an enjoyable game.  It may have a very simple concept, but it’s also a unique concept that I don’t think I’ve personally ever seen in another game.  If I had any other complaints it would be that I would have loved to have seen some form of AI in the other modes so a single person could enjoy them.  Imagine trying out Color Master mode with you as the color master and up to eight AI opponents trying to dodge what you throw at them.  How about you and eight AI opponents battling it out in Arena or King of the Hill modes?  Still, if you’re looking for a quick and simple single player game or a multiplayer game for the whole gang to play at once (unless your party has more than nine people), Runbow is definitely a game worth checking out.

Runbow has a fairly unique concept in its playstyle that I don’t believe I’ve seen in any other game before.  While the single player modes provide quite a bit of challenge on their own, I feel the multiplayer modes are where this game shines.  While AI opponents would have been nice so anyone could experience those modes, this is an excellent game for quick play on your own or for when you have lots of friends over.