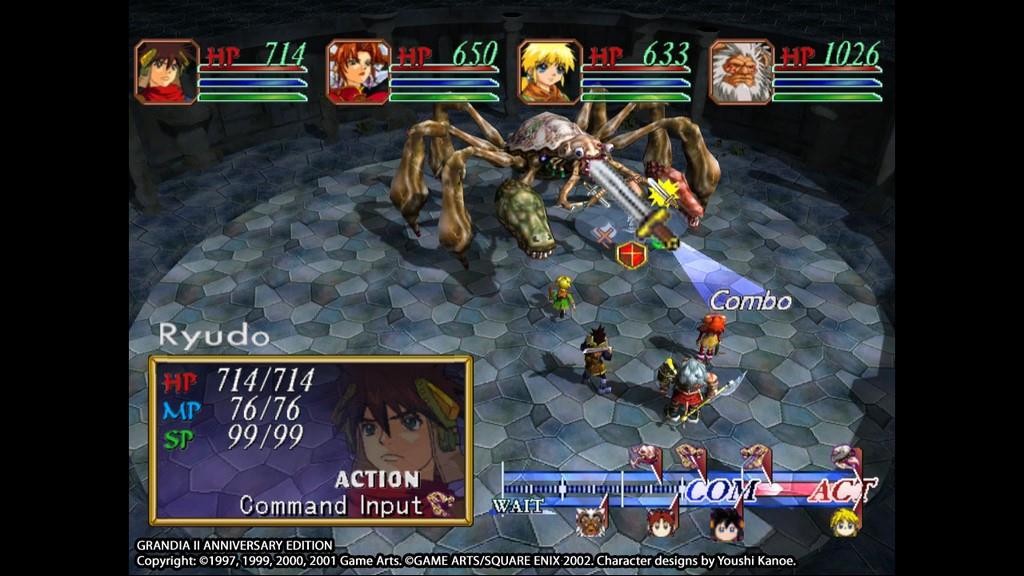 Written by Cyril Lachel on 8/25/2015 for PC
More On: Grandia II: Anniversary Edition

For as much as I love the Dreamcast, I have learned to accept the console's many faults. It was good at so many things, but lousy when it came to traditional role-playing games. Your options boiled down to a few forgettable third-tier adventure games and two exciting Phantasy Star Online entries that ditched turn-based tactics for fast-paced action. If you were a Sega fan in 2000, you really only had two viable RPG choices -- the brilliant Skies of Arcadia and Game Arts' Grandia II.

It's been fifteen years since these two games hit the Dreamcast, and I would argue that they hold up a lot better than most of Sega's 2000 lineup. Just in time to help prove my point is Grandia II: Anniversary Edition, a remastered port hitting Steam this week. While not as flashy as Final Fantasy or as original as Skies of Arcadia, this updated re-release is a testament to how much fun a well-crafted turn-based role-playing game can be.

You play Ryudo, a godless mercenary with a few woman problems. Despite his rough edges, he's a likeable, roguish adventurer who is ready to take on the next quest ... as long as there's money involved. His newest job involves escorting a young songstress named Elena to a nearby religious ritual. But things do not go as planned and darkness is unleashed on the world, killing most of the Sisters of the Church of Granas and leaving Elena with a troubling secret.

While the startled songstress manages to get out with only a few minor cuts and bruises, something has tagged along with her. There's a bit of darkness inside Elena, and it manifests itself as a winged demon woman named Millenia. What looked like an easy job has turned into a real nightmare for Ryudo. It won't take long for our surly hero to get caught up in an epic battle between good and evil.

As adventure games go, this is pretty standard stuff. There's not much subtly to Ryudo, and it's painfully clear that the godless sexist is going to go on a journey that makes him soften on both points. He and Elena embark on a quest to inform others of the impending apocalypse, which forces him to not only get along with a strong woman, but also confront all of the mythology he dismisses as fairy tales. 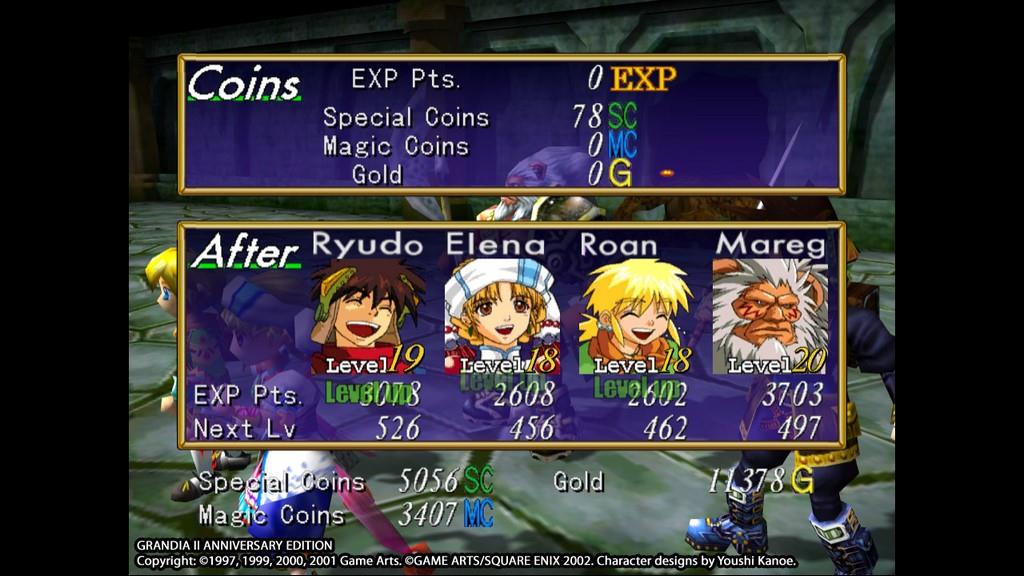 It won't take long for a pattern to develop. Ryudo and Elena will visit a small town, get caught up in their concerns and then explore some enemy-filled dungeon that always concludes with a tough boss fight. Early on the fighting duo will take on more members, including a young boy named Roan and Mareg the beastman. Including Millenia and an "Automata" you find mid-way through the adventure, the game only has six playable characters.

While not the most ambitious role-playing game, Grandia II nails the import important elements. For one thing, the fast-paced combat is as fun to watch as it is to play. Gone are the days of stationary characters standing in a line; Ryudo and his team will be scattered all about the arena and constantly on the move. You'll see fighters chasing an enemy, all while Mareg is chopping up a nearby monster. It's the perfect compromise between turn-based gameplay and speedy combat.

The game's unique combat bar helps give the fast-paced action some much-needed depth. Knowing the order will allow players to time counter attacks and even cancel an opponent's special move. But beware, because the enemies are able to do the same thing to you, leading to some truly epic battles. 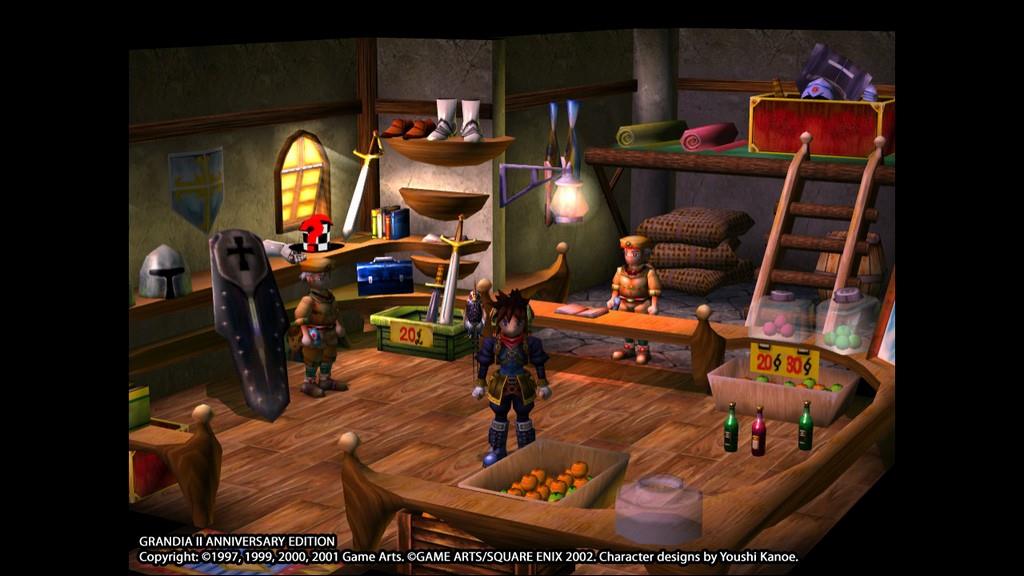 Game Arts' role-playing experience comes through in this polished adventure game. It goes beyond the exciting combat mechanics and permeates through all facets of the game, including the customizable magic spells and ease of equipment shopping. There's a confidence in the writing; it's brash and witty without being showy. The banter between Ryudo and Elena is immediately engaging, and everybody's personality comes through with every line.

At the same time, the game's linear path can sometimes drag down the momentum. There aren't a lot of gameplay surprises after the first few hours; you're on the town-dungeon-boss cycle for most of the adventure. The locations and enemies may change, but you're largely running the same tasks between story beats.

And then there's the awful camera, which has remained a problem since its release fifteen years ago. Normally the overhead perspective isn't an issue, but it becomes a major obstacle in the labyrinthine dungeons. It's too easy to get lost in a sea of walls, forced to fight the camera for a few seconds of visibility. It didn't help that the right analog stick's camera control was mysteriously reversed, which had me scrambling to use the shoulder buttons. 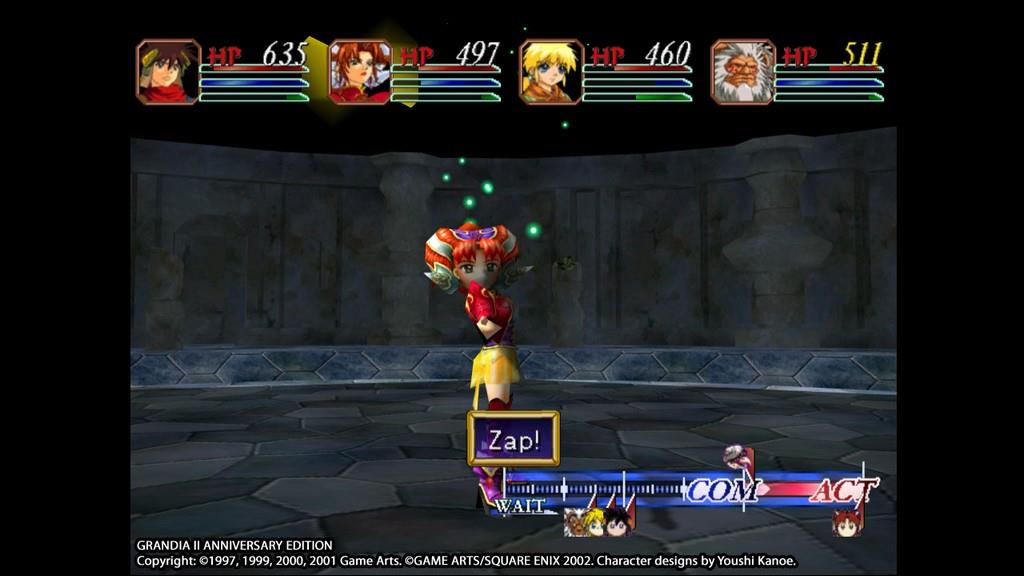 As the "Anniversary Edition" subtitle suggests, this is more than just another Grandia II port. Unsurprisingly, the most obvious difference involves the visuals. Not only has the resolution been bumped up, but there are also new shadow and lighting effects, as well as improved anti-aliasing. That's not to say that Grandia II looks like a modern game, but this is certainly the best I've seen it looking.

Other changes include a new difficulty level and Japanese voice acting, something you didn't get in the Dreamcast original. Unfortunately, nobody decided to go in and explain why this anniversary matters. Upgraded graphics and new difficulty aside, this is a barebones package that gives new players no context. Thankfully the journey itself is worth embarking on, but it wouldn't have hurt to add a short documentary talking about the launch and why this is a game worth remembering.

If they won't do it, then allow me. Grandia II is a back-to-basics old school adventure game that elevates the generic good vs. evil storyline with clever writing and a strong cast of characters. The combat is fast and offers enough changes to set itself apart from the Final Fantasies of the world. I wish GungHo had done more to enhance the game beyond the remastered visuals, but Grandia II: Anniversary Edition is a great port of one of the Dreamcast's best role-playing games.

While not as flashy as Final Fantasy or as original as Skies of Arcadia, this updated re-release is a testament to how much fun a well-crafted turn-based role-playing game can be. Grandia II: Anniversary Edition improves the visuals, adds a new difficulty and offers Japanese voice acting, but fails to put the 15 year old role-playing game into context. Thankfully the writing is compelling enough to warrant playing through this Dreamcast masterpiece.