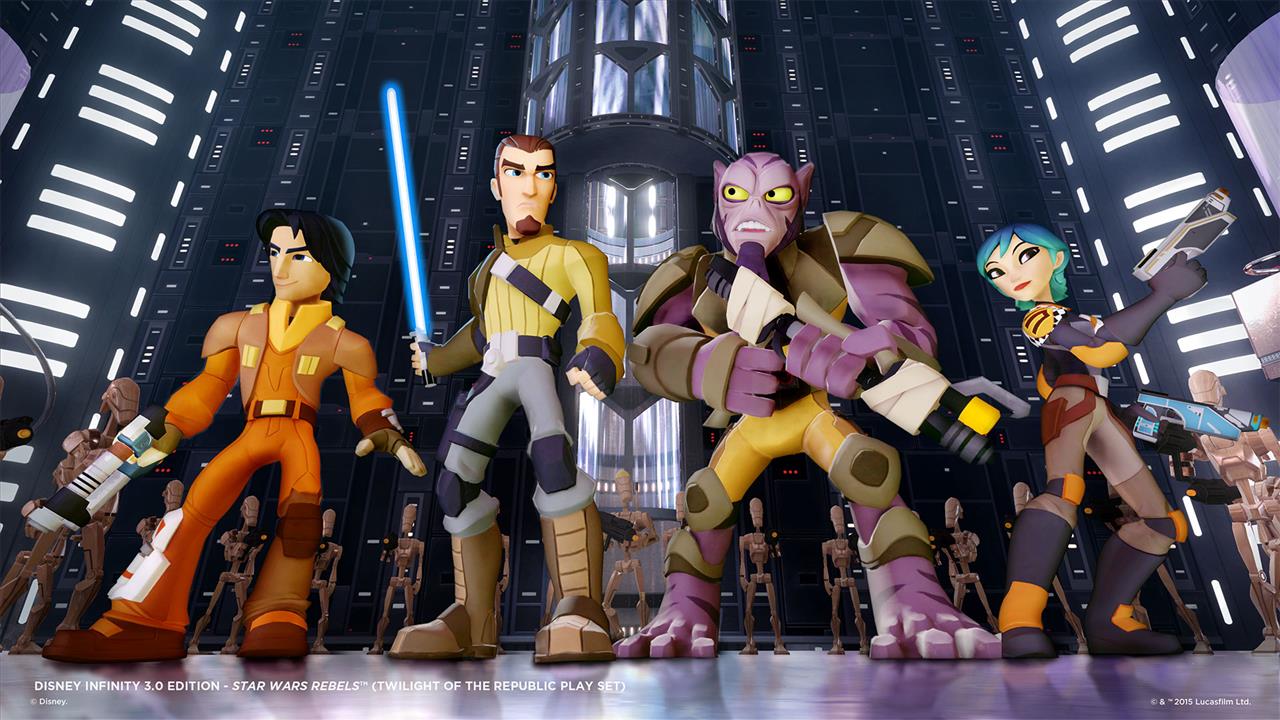 From the first time that I saw a video game where you could take a figurine and place it on an accessory to use them in a game, I was hooked. I haven’t been shy about this fact over the years, as I am usually the staffer here you gets extremely excited whenever there is any news about Disney Infinity, Skylanders, or any other game utilizing plastic figures. I love them, I enjoy them, and yes, I “fall for it” each and every year with each subsequent game release in this particular genre. Between my daughter and I, we play them all in my household. Up until this year, I had always considered the Disney Infinity series to be in the second place spot, behind Skylanders, for the leading franchise of this figure-driven market. Thanks to the improvements made for Disney Infinity 3.0, I am now ready to crown it the King in this genre.

The Infinity series has always been broken up into two, separate experiences. I think it is very important to acknowledge and look at each one individually before judging the entire package. Both have made significant strides in this year’s edition of the game in terms of rounding out their overall experiences. First, there are the play sets, which consist of pre-made, story driven adventures which are similar to traditional gaming experiences. Each starter set includes a single play set, although additional ones will be released post launch. Disney Infinity 3.0 includes the Star Wars: Twilight of the Republic play set, which introduces the Star Wars universe to the world of Disney Infinity.

This play set is set during the Clone Wars era of the Star Wars timeline and brings in familiar characters from the popular Clone Wars cartoon series. You will be jet-setting across four different planets (Geonosis, Tatooine, Coruscant and Naboo), battling it out both on the ground and in orbit. One of my heaviest criticisms of this series in the past has been the lack of depth and polish that was felt in these play sets. While I understand that their purpose is to give an idea of what you can do with the Disney Infinity creation system(s), they really felt too “simple” for their own good.

Twilight of the Republic fees like so much more than a simple, pieced together experience. I would almost call this the Clone Wars game that we should have received during the cartoon’s heyday. This play set truly feels like a unique, stand alone adventure that will surely please Star Wars fans of all ages. In addition to an enjoyable storyline, solid voice work, and gorgeous environments, the wide variety of action and drastically improved combat mechanics really take the idea of an Infinity play set to the next level. 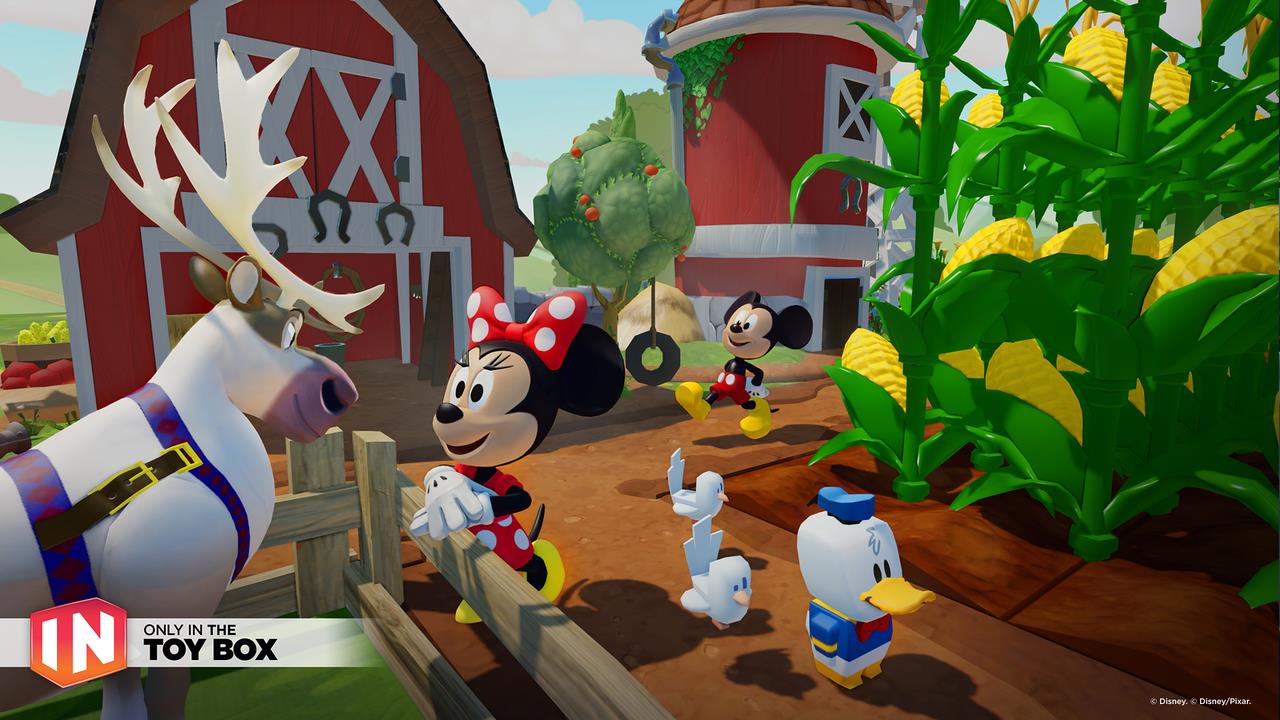 During this adventure, you will engage dogfights in the orbit above the planets, face-paced vehicle chases through crowded towns and villages, and most importantly, constant lightsaber battles against droids and creatures of the Empire. Vehicles wise, for the dog fights and chases, things still feel to be on the simpler side of things. Don’t expect to experience anything that is on par with games dedicated specifically to those types of action, but what is here is enjoyable. Combat on the other hand, feels fantastic and similar to what you would expect to find in the more popular action games on the market.

All together, it feels far more polished than it ever felt with either the Marvel playsets or the earlier, first generation sets. While the Infinity figures have always had attack options, it was never fluid and consistent. Both the gun and lightsaber play here is smooth and “realistic” (in a Star Wars sense, of course). Whether you are flipping around the screen as a nimble Yoda or gracefully transitioning between enemies as Obi Wan, the sword play and fighting, it feels right rather than something that was pieced together.

There is a lot more to the adventure than just combat though as you will do your fair share of exploration and collecting of items for the various missions as well. It all feels cohesive though and a part of the genuine experience, rather than something tacked on in order to extend the length of the experience. In true Disney Infinity fashion, there are also a ton of feats and collectibles for you to find. These are tacked on, but not in a manner in which they impose on your enjoyment. 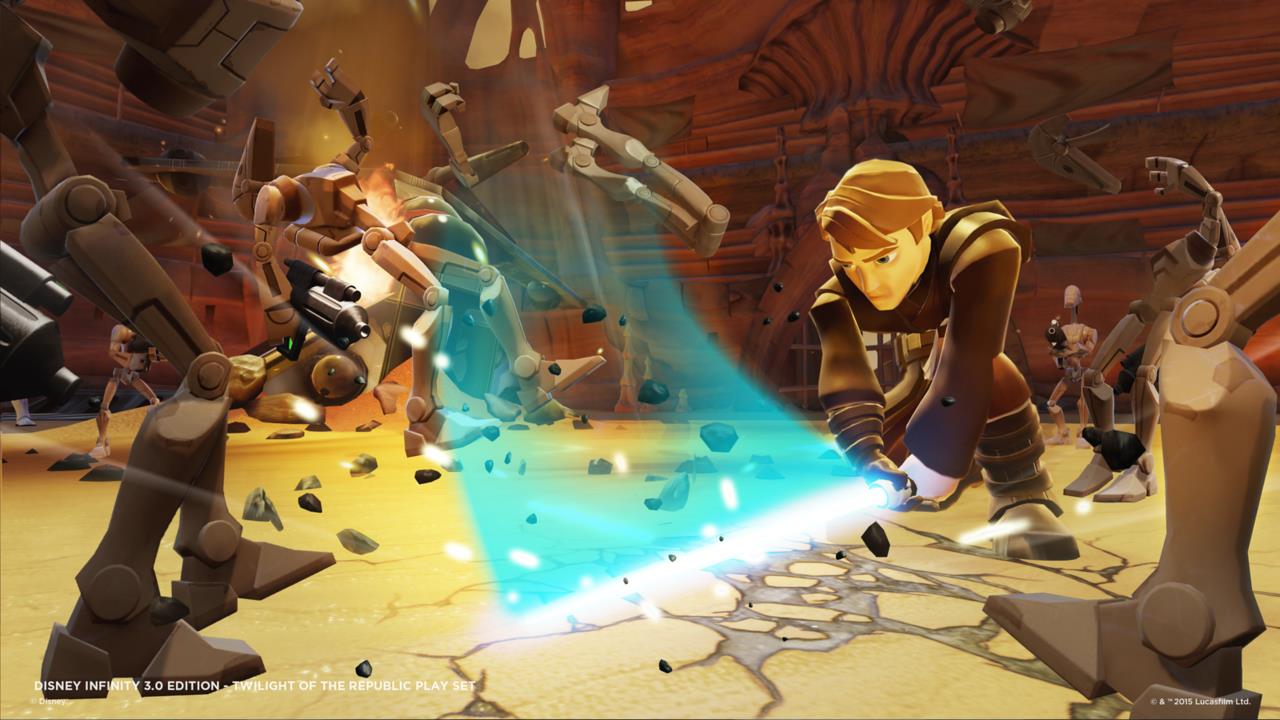 Unfortunately, one of my biggest complaints with my franchise still applies with the new installment: playsets limit which characters can be used for the story mode. Once again, players will be restricted to only using figures that are related to the play set that you are currently using. In the case of Twilight of the Republic, that means there are 5 core characters for you to choose from: Ahsoka, Anakin, Obi Wan, Yoda, and Darth Maul. There are collectible tokens that you can find which will allow you to bring other, select characters into the adventure, such as Princess Leia and Luke, but those are only there for other Star Wars characters. Don’t plan on conquering the Sith Empire as Agent P or Wreck It Ralph because it is never going to happen.

This is my only real complaint with the play set aspect of Disney Infinity 3.0. When comparing it to other figure-driven games, is feels a bit more limited in that it strictly dictates who you can use and when. This has proven to be a bit confusing for younger games that I have shown the game to as they want to use some of their favorite characters and ultimately cannot. The freedom of swapping characters on the fly is the true charm of this genre, and unfortunately, that is extremely limited here. This has been my biggest concern since the first game and it remains my biggest complaint with 3.0.

Fortunately, the ability to experience true freedom with your various figures does exist in the game’s other mode: the Toy Box mode. This is the area where the game opens up into a sandbox styled experience, with players being given the ability to shape and create their own experiences as they see fit. This is where the true fun is to be found, and in the previous games, it has been where the most confusion has been too. There is just so much that you can do within the confines of the Toy Box that it is mind-boggling. They’ve tried to make it easy and approachable in the past with moderate success but this year they seem to have hit their groove for easing players into the experience. 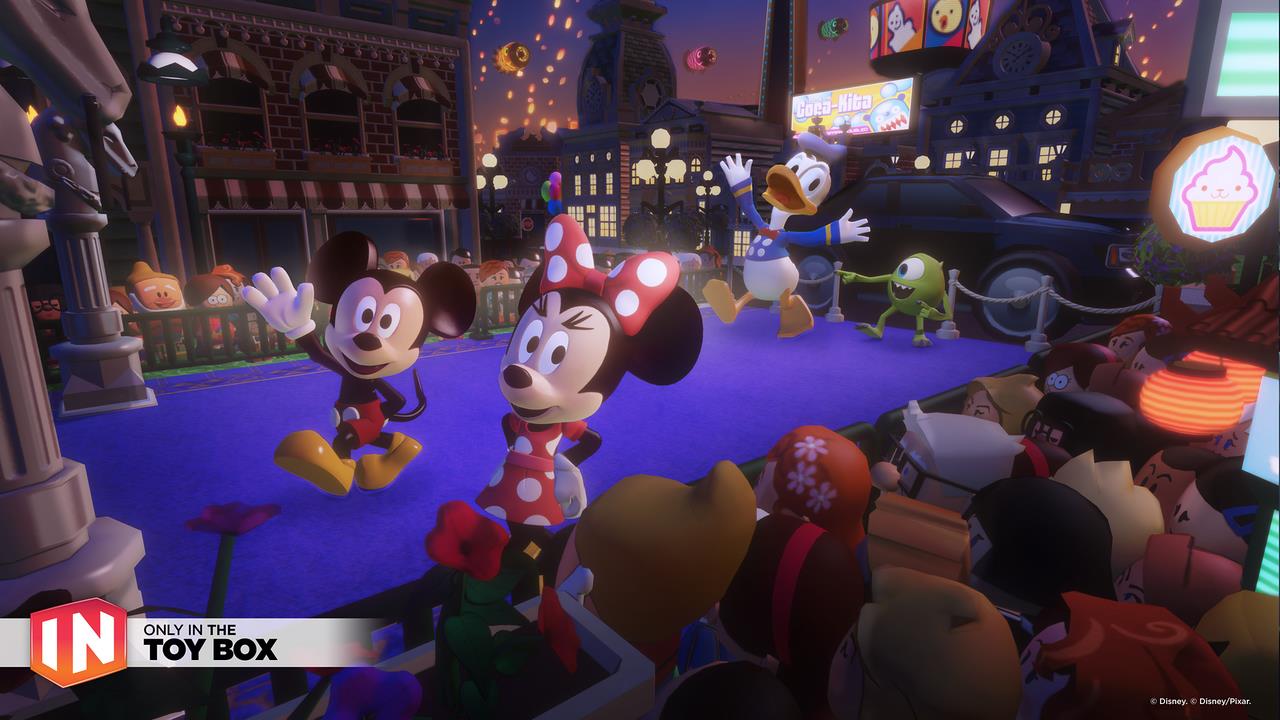 The entire Toy Box is confined within a giant, interactive hub that seamlessly pieces together both Toy Box creation experiences with various tutorials, community content, and connections with other members of the Disney Infinity community. There are tons of things to do within this hub that will appease the play styles of players of all ages. The youngest gamers will be content with simply running around and interacting with the various characters and set pieces found in the base world. They don’t need more interaction than that; they just get to swap figures at will and run around, battling random enemies and climbing through familiar places and buildings, which is what most little kids like to do (in my experience).

As the age and experience of the player progresses, there is more to be found in the hub. There are tons of mini-games and challenges to compete in, which not only reward the player with sparks that can be spent to purchases toys for the construction mode(s), but also teach the various mechanics that can be used throughout the experience such as racing, platforming and combat. In addition to all of this, experienced players will find missions and content that literally teach them to build their own worlds and miniature game experiences. The manner in which the Hub eases players into the experience based on their skill level is extremely impressive. The best thing that players can do is to explore the Toy Box Hub to its fullest extent. Play the games, complete the tutorials, and explore the environments. You will be rewarded for doing so, both literally and figuratively. 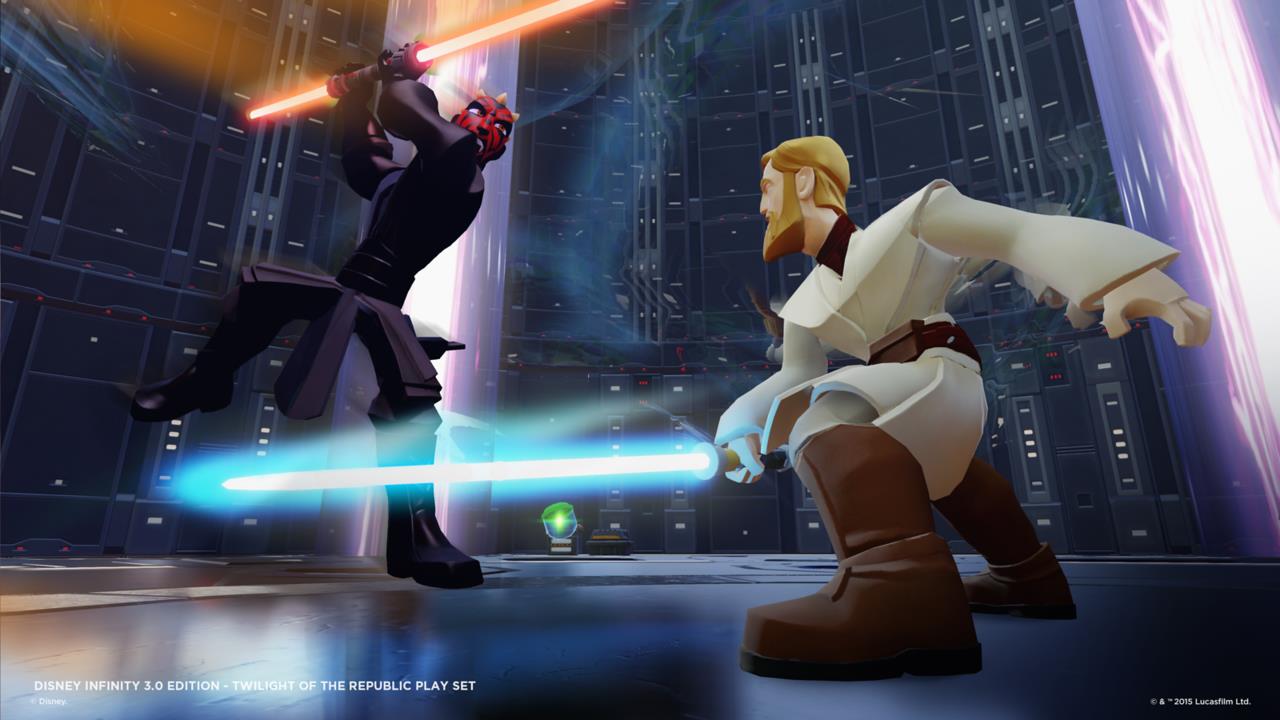 Whether you are collecting sparks to be spent in the in-game store, unlock special gifts and set pieces for use in construction, or become well versed in what you can and can’t do within the confines of the game’s creation system, fun is had at all times. Its fun and engaging, in a manner that is not usually found within content creation software. Exploration on its own is a rewarding experience which means that not a single second of time spent in the hub is wasted. This approach makes creation as fun as it is satisfying, which is a great feat for a game with such broad options.

As expected, all of the previously released figures for the series work within the confines of the Toy Box. Whether you want to gear up as the Lone Ranger and Tonto from the first generation or take the Avengers on a mission from 2.0, they all work here. It’s always nice to have your previous investments retain their value. The only thing that doesn’t carry over from the older games are the actual play set adventures, although variations of them are often available within the toy Hub’s community creations, in the form of both user- and developer-created content. Those options will continue to grow as more and more figures and play sets are planned for release during this game’s lifespan. Plus, the franchise is seeing a new option this year with “expansion toy box games”, which will offer smaller (size wise) experiences than the full play sets, but allow players to bring the various characters together for adventures across their franchises. So yes, ultimately you will be able to have Agent P pledge his life to the Dark Side and run alongside Darth Maul and Darth Vader, taking down enemies and Rebels alike.

Disney Infinity’s strides keep getting bigger with each and every release. The trends that I applauded the game for last year are still present and moving in the same, positive direction. The game has become a lot more polished and the experience a lot more accessible than either of the previous installments. Neither me nor my daughter felt intimidated by the wide variety of tools and options available even though the assortment is mind-boggling. Thanks to new tools and toys, and support for expansions games, the Disney Infinity experience has never been as robust and user-friendly as it is in 3.0. This is the family game to get for 2015.

Disney Infinity 3.0 is an absolute blast for the entire family. The development teams have done a great job at rounding out the experience to make it both more accessible and more enjoyable for all ages.