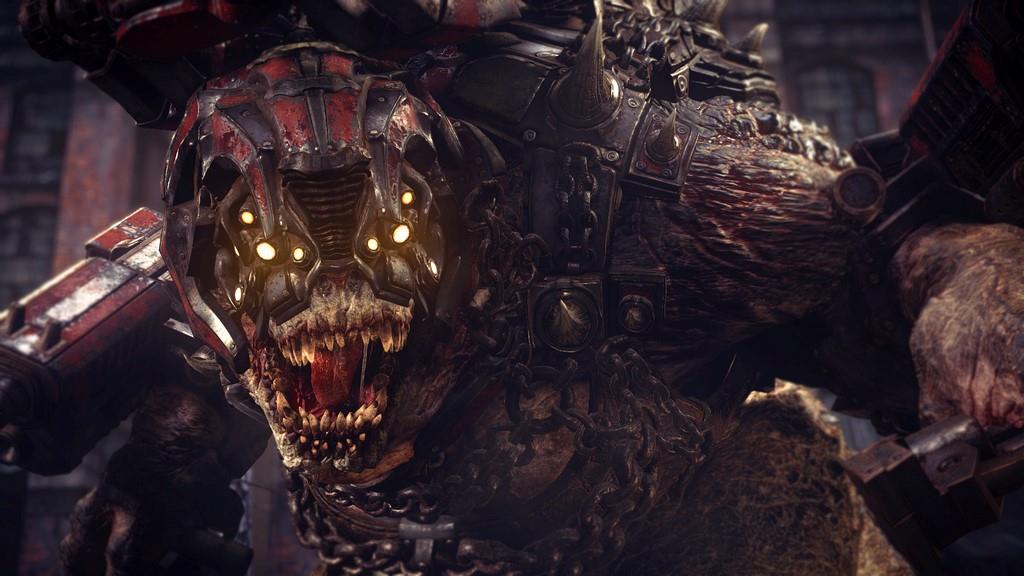 Written by Nathan Carter on 8/24/2015 for XBO
More On: Gears of War: Ultimate Edition

This review was updated on 9/14/2015 to reflect the multiplayer portion of the game, the score did not change.

The original Gears of War, in my opinion, is one of the greatest action games ever made. I still remember playing it for the first time and being blown away because I knew at the time that I was experiencing something special. I instantly fell in love with the characters, the lore, the action, the gameplay, the multiplayer, I loved everything about this game, so when I heard the game was getting a remaster, I instantly got excited. I then wondered if this game would translate well to current gen consoles, or would the game seem dated? I am happy to say that Gears of War: Ultimate Edition not only translates well to the Xbox One, but It's probably one of the best games you could buy on the Xbox One.

Gears of War: Ultimate Edition is a remaster of the original Gears of War for the Xbox One and even though It's now HD, It's not a simple HD port. The entire game from top to bottom has been remastered in 1080p. Every level, every character, every cutscene has been updated and looks fantastic. Honestly, if I heard heard nothing about Gears of War until today, I would have a hard time believing that this was game that was originally released back on the Xbox 360 almost a decade ago. This is because the action of Gears of War is still top notch to this day and one of the reasons for that is the active reload feature. Instead of pressing a button and reloading automatically, when you hit the reload button a meter shows up in the top right corner. You have to press the reload button again once the bar hits the sweet spot. While doing this, one of three things can happen. If you time it right, all bullets that were reloaded will now give you a damage boost. If you miss the active reload, your gun will jam and will leave you completely open for attack, or you can choose to do nothing and reload normally but it takes more time to do so. This adds an intense level of tension onto every fire fight and especially when you have enemies coming up on you. A mistimed active reload while you have enemies surrounding you can be fatal. My first few active reloads, I failed miserably, but after a while, it all came back to me, and I was reloading like a champ.

I think one of the reasons that I love Gears of War so much is because it reminds me a little bit of Doom. The one thing that Doom and Gears does great is how it throws stronger enemies at you as you progress throughout the game. I know that my heart starts racing every time I hear "BOOM" and see a rocket come flying in my direction. Each enemy in Gears of War has it's own unique look, their own unique weapons, and their own unique way of attacking you. Just like Doom, and this is what makes Gears so great. It forces you to think as you are fighting. Running in head on into a bunch of Gnashers is going to get you killed real quick. See a Theron? Take cover because a Torque Bow shot is coming your way. See multiple Boomers? You better fall back and hope you are loaded up with ammo cause it takes a lot to take them down. You also better make sure you are fully loaded at all times because the Locust will try to rush you and flank you right at the worst possible time. All of my deaths are usually thanks to Gnashers that rush up on my while I'm taking cover and kill me with a point blank shotgun blast. 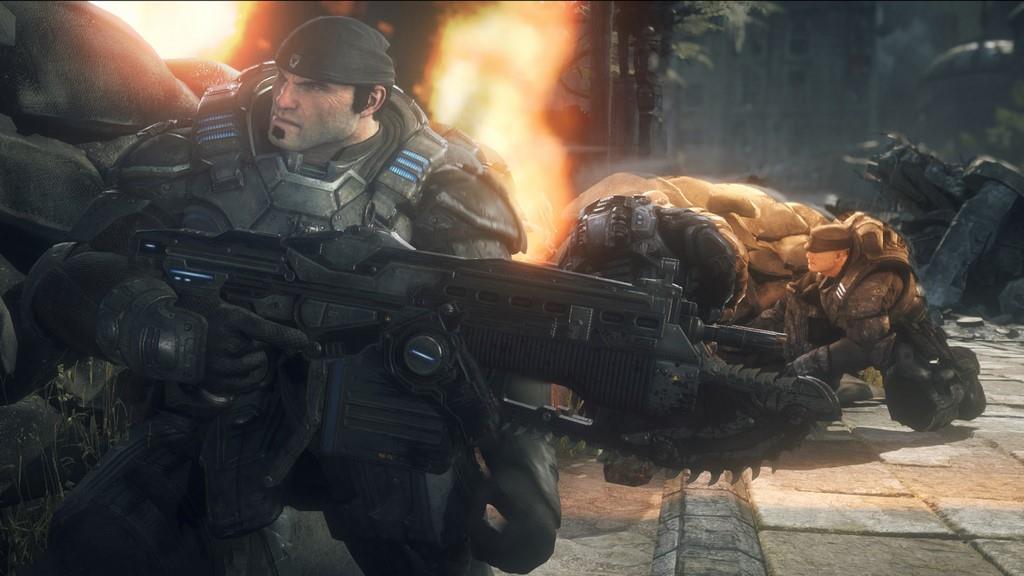 Now while the single player experience, which depending on your difficulty level, and how much you search for Cog Tags, should take around 6 hour or so to complete. The Ultimate Edition however suffers the same problem that was present back in the original game. The AI of your squadmates is terrible. Most of the time you will see Dom just run right into the middle of a fire fight only to be downed seconds later. One time I saw him run into the middle of a fight just to take cover, and then get instantly get taken down. Usually this isn't much a problem, it's more of an annoyance, but it becomes a huge problem when having to face . There was even one time where Dom just stopped in the middle of a narrow hallway and wouldn't move, basically blocking me into the room. I had to restart the chapter because he wouldn't move.

The single player campaign also features five new chapters that were previously only available on the PC version of the game. I was unaware which of these chapters were new when I played through the single player campaign and I actually had to look up which chapters were new because fit seamlessly into the story and don't feel like add on's to pad the story. The more Locusts to kill, the better. Another new addition to the Ultimate Edition are comic books, which can be unlocked via collecting the Cog Tags in single player.

Update:
Of course Gears of War isn't just a single player experience. The multiplayer that everyone knows and loves has returned and is bigger and better than ever. The first thing that you will notice right away is that the multiplayer runs at a glorious 60FPS and a smooth frame rate is incredibly important with Gears multiplayer as you will need to be flying in and out of cover constantly. The other big improvement is that you get quite a ton of content to keep you busy for a while. Ultimate Edition's multiplayer mode features 19 maps including all of the DLC maps from the original 360 version and the PC exclusive maps as well. Fan favorites like Team Deathmatch, Warzone and King of the Hill return in social matches, but there is also a competitive match lobby that offers more game modes. These game modes include Assassination, Annex, Execution and a 2v2 Gnashers only mode.

It's been a very long time since I played any Gears multiplayer and I felt right at home as soon as I fired it up. Multiplayer is fast, fun, and can get pretty intense. Being the last one left alive on the team, knowing your teammates are watching your every move, knowing the enemy could come out at any time, only to nail him with a Torque Bow shot from long range giving your team the victory.
Depending on the game modes, matches are rather short as well and this is one of those games where you will be saying "just one more game" over and over again. Next thing you know, you look out the window and the sun is coming up. There is also incentive to level up as you can unlock new characters like Samantha Byrne and Jace Stratton just for leveling up.
Unfortunately again, just like the nagging issues that returned in the single player campaign, some issues return to multiplayer as well. For one, your long range default weapons like the Lancer and Pistol are pretty much worthless. They hardly do any damage as it is and your opponent can quickly take cover to regain their health back anyways. The Gnasher shotgun on the other hand is way too overpowered and multiplayer matches usually come down to who can aim the shotgun better at close range. Of course maps still have the special weapons as well like the Hammer of Dawn, Torque Bow, Boomshot and the Longshot but it's the placement of these weapons that is frustrating. I guess I can't really fault the developers for this, but it's incredibly annoying during a game of King Of The Hill when instead of running towards the goal, my teammates are running off in 3 different directions because they all want to grab the special weapons. In the middle of the match, it's not a big deal, but the placement of the weapons really discourages teamwork, especially at the start of a round.
Those issues aside, multiplayer is still great. Even on launch night at around midnight, I experienced no problem finding matches and experienced almost no lag or server issues at all. I can tell that Microsoft really put a lot of time and effort making sure the launch would go as smooth as possible and as far as I can tell, it has, at least for
New graphics, new levels, and new features make this one of the best games you can buy on the Xbox One.