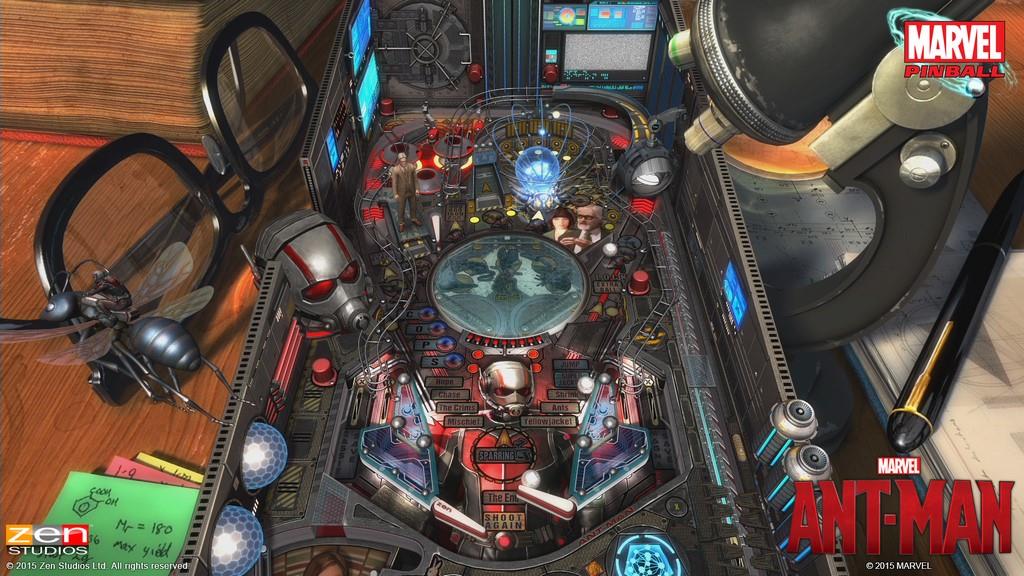 By now, I think everyone knows the routine: a new Marvel movie means a new and related Marvel pinball table. Zen has certainly put the Marvel license to use over the past couple of years. They have been on the mark with a variety of tables that tie into both the various Marvel comics as well as timely, themed creations that tie in with Marvel’s theatrical releases. You would be hard pressed to find a bad table in the bunch, and that includes their latest release of Ant-Man Pinball.

As with most Marvel pinball tables, the Ant-Man table truly engulfs the world of the recent Hollywood film, physically speaking. Set inside of Hank Pym’s laboratory, you’re guided by rendered versions of the film’s two main characters, Dr. Pym (Michael Douglas) and Scott Lang (Paul Rudd). The two narrate a majority of the action with their witty banter and conversation which lays out the premise of the film in context. You will also see brief appearances by Pym’s daughter, Hope as well as the villain, Yellow Jacket.

Thankfully, the table doesn’t make the mistake of attempting to do the job of the movie and tell you a story. Other tables have tried to do this and the resulting experiences have been hit and miss. It is hard to tell a full story within the confines of a pinball table and few other than the Walking Dead table have been able to do it successfully. With Ant-Man, you are given a primer to the Ant-Man technology with hints to the story arc of the movie. This is great because it focuses on what makes the story interesting: the technology that drives the Ant-Man suit.

For once I can say that I am not disappointed with the voice work for one of the Marvel tables. With so many of these releases being based on films, it is usually very disappointing to hear different actors voicing the speech on these tables. How hard would it be to simply lift clips and samples from the films (licensing aside)? While the Ant-Man table uses new actors, their voices are pretty close to the original, Hollywood work of Michael Douglas and Paul Rudd. They don’t stand out as being different nearly as much as the work that we’ve experienced on the Avengers tables. 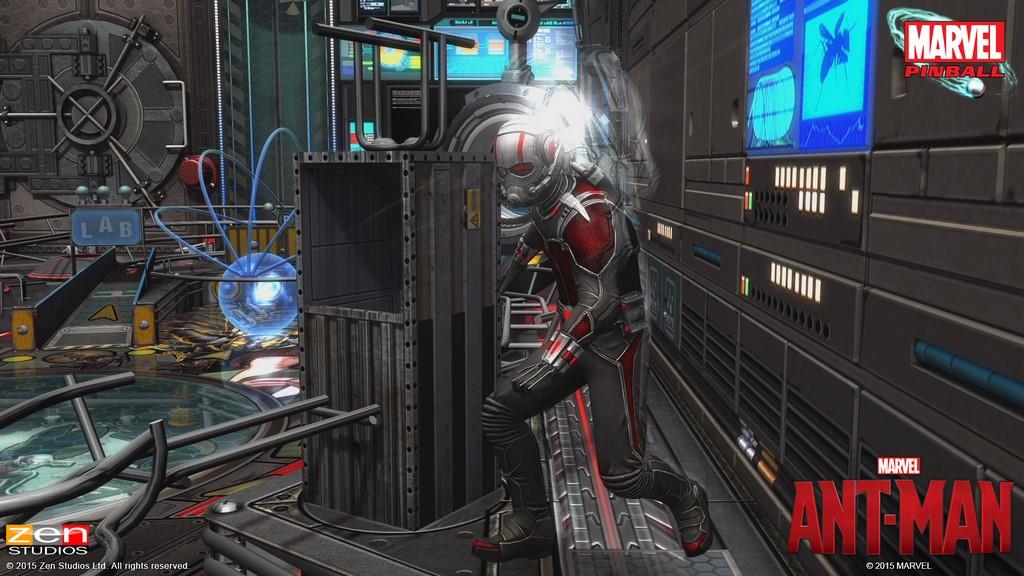 Most of the playing field is open, with nearly all of the interactive elements being housed at the top of the field. Here, you’ll find all of the ramps and triggers necessary to launch the table’s missions and the unique feature of this table: the particle-ball. The particle-ball, in particular is extremely cool in terms of its implementation. Just as the Ant-Man suit’s technology in the movie, the particle ball is sort of an experiment of sorts that you will interact with. Once you trigger the ball enough times, you can initiate machine that shrinks the ball down a size. If you can do this multiple times, you can get the ball small enough that it can exit its cage and a multi-ball mode will begin.

This is a very simple concept but it is also a lot of fun. In a way, the entire concept of triggering the multiball mode becomes your main focus on the table, and the manner in which it is implemented truly embraces the subject matter of the theme. A lot of the table’s missions embrace the Ant-Man shrinking / enlarging concept as well, but those aren’t as easily triggered as the particle ball. A lot of the missions require specific patterns of rails and targets to be triggered, which aren’t the easiest to figure out on your own. I highly recommend familiarizing yourself with the table guide that is found in the pause menu in order to get a solid grasp on how the mission structure works.

Overall, Ant-Man is an excellent addition to the Marvel family of Zen Pinball tables. It goes to great length to capture the charm of both the characters and the movie without the usual awkward attempt to re-tell the story through gameplay. The biggest issue is that the missions aren’t as self-explanatory as they have been in other tables, but thankfully the in-game table guide explains things pretty well.

Despite having a bit of a learning curve, Ant-Man has quickly become one of my favorite tables that Zen has produced. It really ties in well with the Ant-Man character and world without having to retell the events of the film.