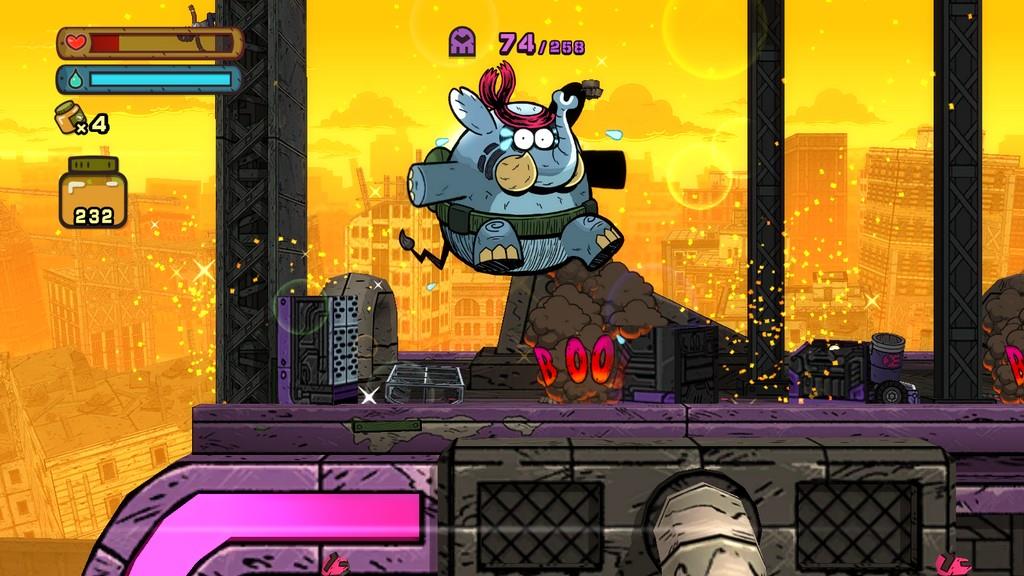 Sega has been struggling for nearly 20 years to reproduce the thrill and charm of the original Sonic the Hedgehog games. The 16-bit Genesis entries in Sonic’s franchise are easily among the best platforming games in history and easily the best that the Blue Blur and Sega have managed to put out. The combination of speed and charm made for great gaming memories. Now, more then 20 years later, a game has surfaced that feels and plays exactly like the classic Sonic the Hedgehog that so many gamers know and love.

Nobody would have guessed that a developer that found its success working for Nintendo is the same one that has managed to bring back the magic for Sega; it is also just as insane that the same magic and speed that a small, blue hedgehog was known for is what is now the marquee ability of a big, grey elephant. Yes, Tembo the Badass Elephant is just that, a speedy “badass”, military-trained, mercenary elephant and the best hope for not only rescuing Shell City, but in bringing gamers back to the classic days of Sega’s Sonic platformers.

You are Tembo, an elephant on a mission, literally. Following the invasion of the evil Phantom military force, the people of Shell City turn to the biggest hero imaginable (pun intended) to save them. It is a very straight forward set up: three different areas, each consisting of three different stages, a base and a boss. Your job is to get from the beginning of a stage to the end, taking out as many Phantom soldiers as you can, rescuing civilians and collecting peanuts. You have to achieve a certain “kill count” during the main stages in order to unlock the base and level boss. It’s simple, straight forward, and pretty fun.

Right from the start Tembo the Badass Elephant has both the look and feel of the classic Sonic games. This is a vibrant world filled with bright colors and extremely well-animated characters. the art design of the game is fantastic, bringing out a ton of details in both the environments and the characters, both good and bad. It has a great “comic book” feel to it by design, with words often being written on the screen to represent sounds and quick flashes between scenes set in panels to tell the story. 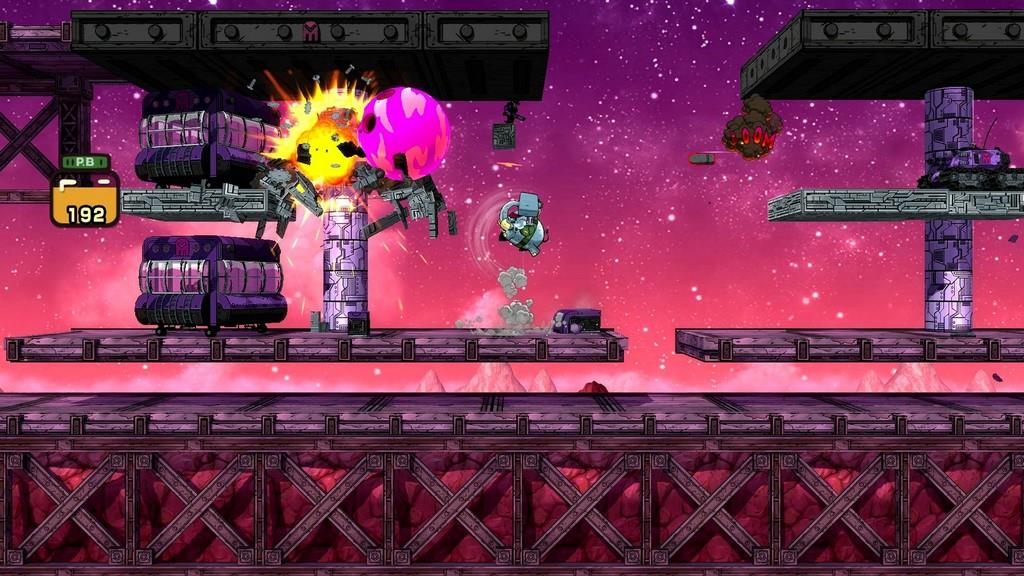 Your control options are relatively limited compared to most modern platformers. You can jump, stomp, spray water, and strike objects above you with your trunk but you most effective and reliable ability is your dash. Most of these abilities are tied to a single button, just like Sonic’s spin and dash were, with the exception being when you spray water with your trunk. That incorporates the triggers and allows you to direct the water stream with the analog stick and is used to put out fires that inhibit your path throughout the game world.

While this simplifies things in terms of learning the controls, it also becomes a bit of a roadblock when things start moving at faster paces. It seems hard at times to get Tembo to do exactly what you want, when you want. Trying to transfer from a dash too an uppercut and then shifting your momentum towards an awaiting enemy should be simple given this configuration, but he doesn’t always respond the way that you want. It would have worked out a little better had more of the controller been incorporated into the control scheme; there are a ton of unused buttons on the controller which would have alleviated these issue with ease.

Having access to all of these various maneuvers are nice, but speed is really everything (which is sort of funny given the fact that your character weighs a couple of tons). Like a true mercenary, you want to get in and out as quickly as possible. Your true goal is really to build up a full head of steam and plow through the enemies and environment, knocking down trees and buildings and wiping out enemies both on foot and inside of vehicles. That is when the game is at it’s best and when the true joy of the experience comes out. The problem is that momentum comes to a screeching halt way too often. 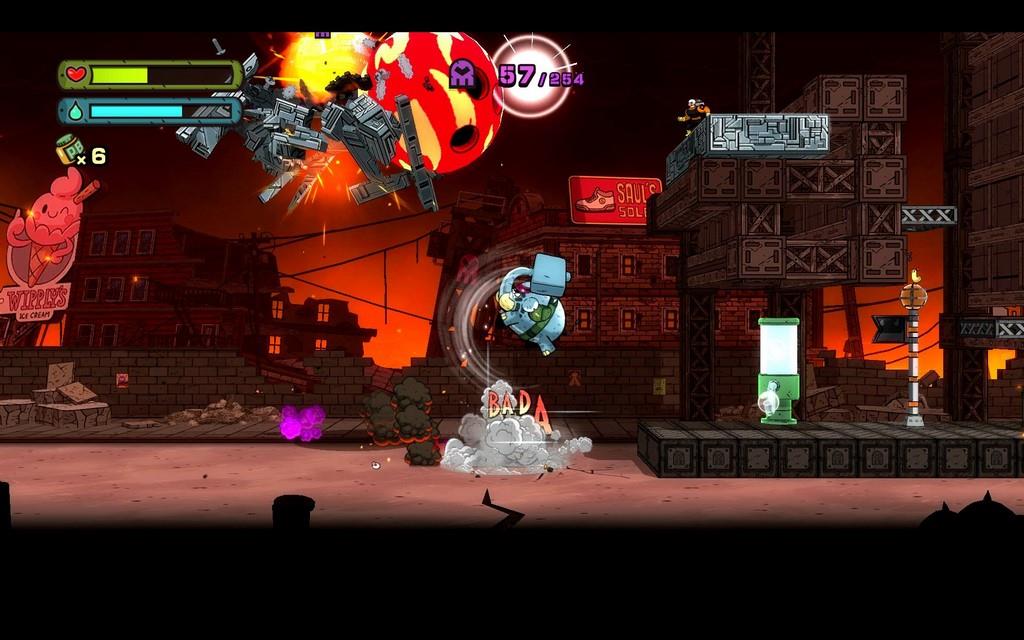 After all, we are talking about a giant elephant here. It makes sense that it takes him a little bit of time and space to get to his top speed; and once he is moving, it would make sense for it to be difficult to stop him. The levels in Tembo have you starting and stopping almost constantly, which takes the player out of the joyous groove that comes when everything is clicking perfectly. As soon as you start to get in a rhythm, you’re stopped and force to lumber around slowly, jumping from platform to platform or navigate small, cramped areas. During these parts, the game feels very disjointed and the controls ultimately non-responsive. You’ll find yourself praying for the chance to get back out in the open and charge ahead again, and you will get it soon enough. But you will be stopped again as well.

This happens over and over and over. Some might argue that is by design but it doesn’t make sense to me that you would design your game in a manner that keeps it from doing what it does best. As a result, some of the levels come across as a chore, especially given the fact that you will likely have to repeat quite a few of them throughout the adventure. Since the various bases and boss fights unlock based on your “kill count”, there is a bit of grinding that ensues as you go back to clean up straggling enemies in later levels. It would be fine if the whole game focused on that intense momentum that Tembo can often attain rather than shifting the focus off of it with clunky areas of slow-paced platforming.

Tembo is an enjoyable game that suffers from an identity crisis. It wants to be spiritual successor to the original Sonic the Hedgehog games, and it fits that mold for the most part. When things are moving at a breakneck speed and you’re barreling through enemies and environmental objects, the game is extremely enjoyable and it really brings back fond memories of Sonic and the Genesis. The problem is that those moments are constantly broken up with extremely slow-moving sections. The dichotomy in the character’s movements makes sense, but it also detracts from the overall enjoyment and flow of the game. Perhaps it slows down too much, because the enjoyment factor of the game seems to tie in directly with Tembo’s physical pacing. The result is both a literal and emotional roller coaster ride. You’ll find yourself spending most of your time waiting for the next descent so that you can throw your hands up in the air and enjoy it while it lasts.

Overall, Tembo feels like a badass-tribute to Sonic the Hedgehog. It should have taken a few more pages out of the Blue Blur’s playbook though in order to create a more complete experience that honored Sonic’s legacy with consistent gameplay that focused on its strengths rather than constantly shining a spotlight on its weaknesses.