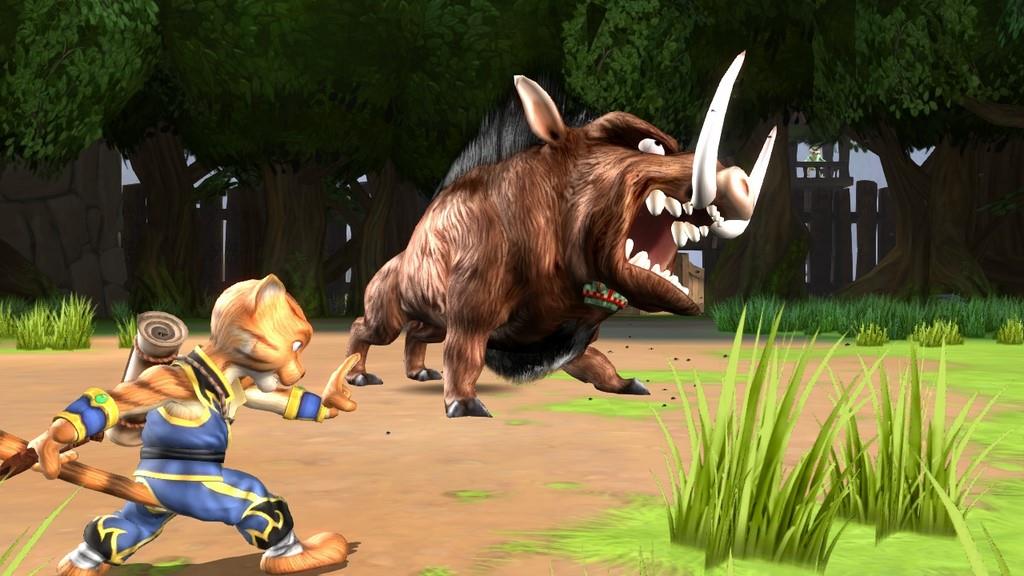 Written by Russell Archey on 8/19/2015 for PC
More On: Legend of Kay Anniversary

A lot of people can be split when it comes to re-releasing older games.  On the one hand some people might think that a publisher is running out of ideas and has to resort to re-releasing or re-mastering older games.  On the other hand it gives a chance for a newer generation of gamers to experience those older games, and I’m not just talking about things like the Virtual Console but also taking older console games and releasing them on the PC.  That happens to be the case here with The Legend of Kay Anniversary.

The Legend of Kay was originally released back in September 2005 for the PS2.  It then got a DS port a few years later, but only just recently hit current and previous generation consoles as well as the PC.  The story takes place in the land of Yenching where four races of animals have prospered for years: cats, hares, frogs, and pandas.  However, as the years passed the younger generations began to defect from their religious code known as The Way and with no protective code to protect them, Yenching was soon invaded by the Rats (known as the Din) and Gorillas.  A young cat named Kay is determined to take down the Gorilla minister Shun and the Rat alchemist Tak after the training school of Kay’s master is ordered shut down to make way for new Din training schools.

The game goes back and forth between 3D platforming and combat scenarios, with an occasional mix of the two to take out a few bugs flying around.  A lot of the time however the game will shift to a combat-centric scene when you’re taking on “major” enemies (ie. Bosses or enemies such as the rats and gorliias).  The game’s combat mechanics, for the most part, are pretty well done.  The combats themselves however can be a bit frustrating.  You have a variety of attacks such as a three hit combo and a couple of jumping attacks, and you can also block attacks, roll behind enemies, and throw them from behind.  The problem is that during all of these you’re completely open to attacks.  Okay, that makes sense, but the AI has a habit of spreading enemies out in a way that as you’re taking one down, even if you roll behind them first, another enemy is usually positioned to hit you while you’re attacking.

It also doesn’t help that one of your better jumping attacks, done by hitting the dodge, jump, and attack buttons in quick succession, will leave you completely defenseless and unable to move for a couple of seconds afterwards, during which time you’ll likely take a hit.  Most of the time while in combat I found it easier to just roll behind the enemy, get a three hit combo in to knock them down for a moment, then repeat with another enemy until the area was clear.  It’s repetitive but it gets the job done…eventually.

The platforming is your typical 3D third-person perspective platforming which means it’s not horrible, but not great either, and the biggest problem is the camera.  In fact, the biggest problem in the game in its entirety is the camera.  While you can move the camera around to get a better vantage point, there are many times in which you can’t move it where you want to for some reason, meaning you might have to make a semi-blind jump onto the next platform and hope you make it, otherwise you’ll fall down and either die or have to redo part of the area all over again. 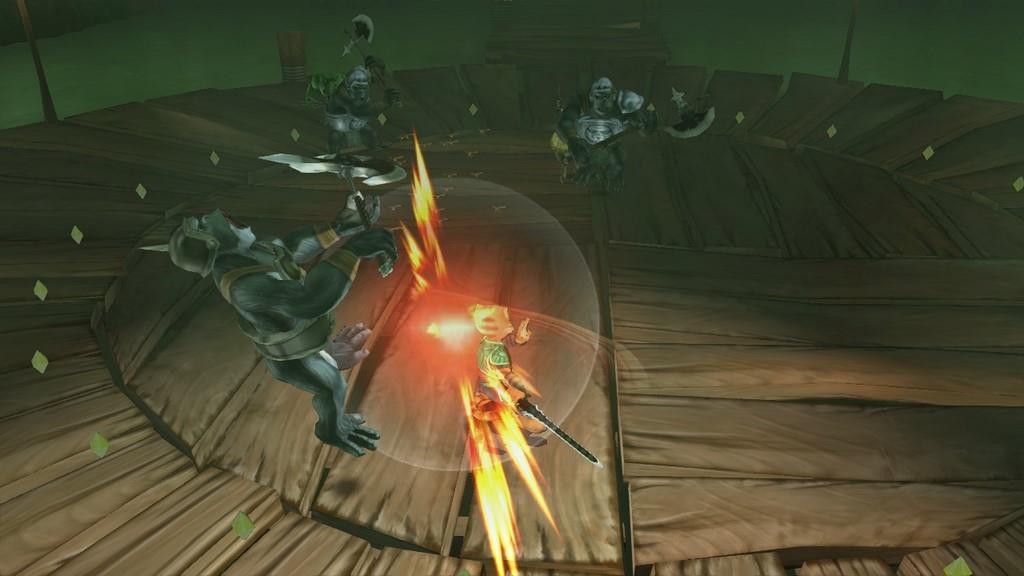 There are also areas where you have to ride on certain animals and boats to get to the next area and the camera doesn’t help here either.  With the animals (especially the boars) the camera can badly hinder what’s up ahead and if you screw up you have to start the area all over again, so it’s mainly trial and error.  As for the boat, one area that gave me issues was trying to navigate a boat around a swamp area that had explosive barrels.  Going near a barrel would set it off and if you were too close to the explosion, you’d not only lose a block of health but the boat would spin a bit, throwing you off course.  It was incredibly frustrating when I finally got the boat under control and going in the direction I wanted it to, only to be knocked right off course again by an exploding barrel...oh, and the barrels re-spawn themselves as well.

The camera also doesn’t help in combat, especially seeing as how the enemies can be scattered all over the area making it hard to keep track of them all (granted there are red arrows pointing to enemies off screen, but they don’t really indicate how close they are).  As such, as I mentioned earlier if you let the enemies get scattered around it’s easy to take damage while you’re focused on a particular enemy.  Even still, I’d have to say that the combat was probably my favorite part of the game. 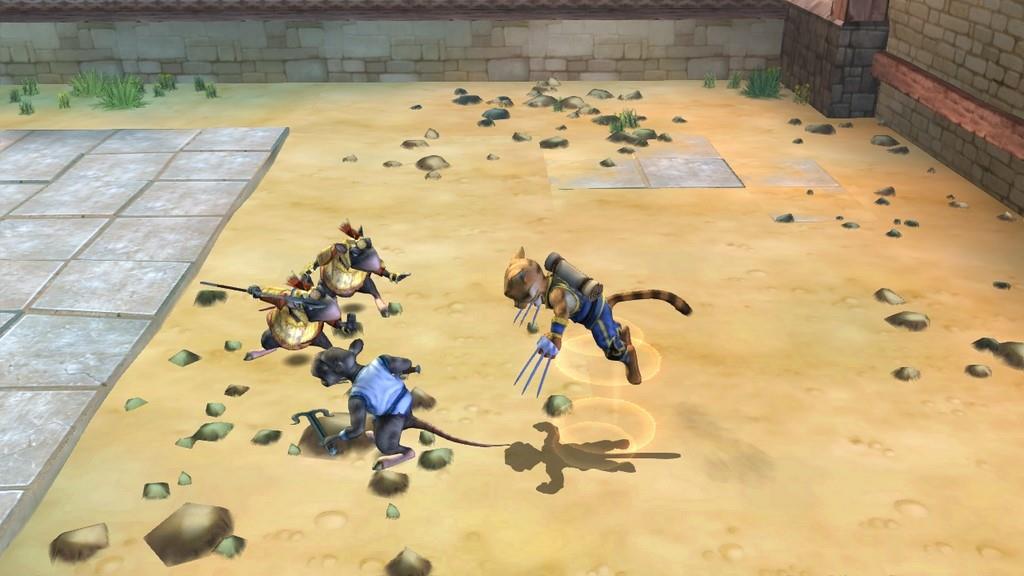 Aesthetically speaking, The Legend of Kay Anniversary looks and sounds pretty good for what was originally a PS2 game.  That being said there is one thing that I have a hard time tolerating, and that’s Kay’s voice.  Some of the other voices can get a bit grating at times, such as those of the rats, but the voices themselves do kind of fit the characters when you think about it…and then you have Kay.  Maybe it’s just me, but Kay’s expression in his voice doesn’t seem to change that much, if at all.  I don’t want to use the term monotone, but it seems like no matter what he’s talking about or what his mood is supposed to be, his voice just sounds the same and non-expressive.  It’s one of those things you kind of have to hear for yourself to understand.

Overall I wouldn’t say that The Legend of Kay is horrible, but it’s not the best game ever either.  While there is a lot to like for fans of 3D action platformers, there’s quite a bit that can make one frustrated as well.  If the voice acting was better and the camera issues vastly improved, this would have been a much better game.  As it is though, as much as a fan of 3D platformers as I am I found it a bit of a struggle to get into this one a lot.  I did enjoy quite a bit of it though, don’t get me wrong.  The story is interesting (though the comic-style cut-scenes I could do without), the graphics and music hold up pretty well, and I do enjoy the combat for the most part, camera issues aside.  If a few more things were fixed or tweaked, this would have been a lot better, but as it stands, I’d have to say it’s kind of average.

The Legend of Kay Anniversary isn’t a horrible game, but it leaves a bit to be desired.  The platforming is okay for the most part and the combat takes a bit of skill to come out unscathed.  However, the voice acting could be better and I absolutely despised the camera.  If you’re a fan of 3D platformers or enjoyed the original PS2 release, you’ll likely enjoy the anniversary edition as well.  For those who haven’t played it before, it’s not bad, but just kind of average.